Hi again folks.  It’s been a while since I last wrote something for Model of the Month.  Where Covid lockdowns gave us additional opportunities to get building, Covid itself robbed me of the motivation.  No idea why, but it did.  So here I am at Christmas 2021 finally digging out kits that I hadn’t got the enthusiasm to build.  Fortunately, just prior to Christmas, a young colleague at work effectively challenged me to build a wagon before we broke for the festive season.  It wasn’t the subject of this piece, but it was Slater’s 2 ton Ffestiniog wagon and I did complete it.  This was the start of my ‘recovery’! 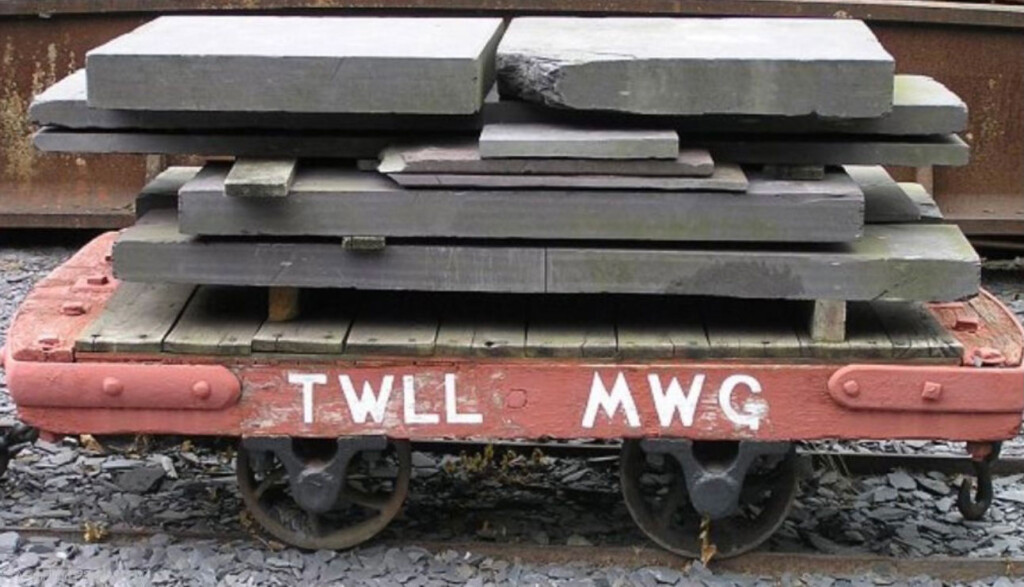 So what next? Something small again.  I’d been looking through loads of photos on my iPad and came across some photos of the Welsh Slate Museum exhibits.  I had built one of Slater’s Dinorwic slate wagons some time ago, and figured that the slate slab wagons at the museum were based on the finished slate wagons.  Now that was something I could do in the warmth of the house and that I liked the look of.  Quick! Order a kit from Slater’s in the hope it arrives before Christmas. 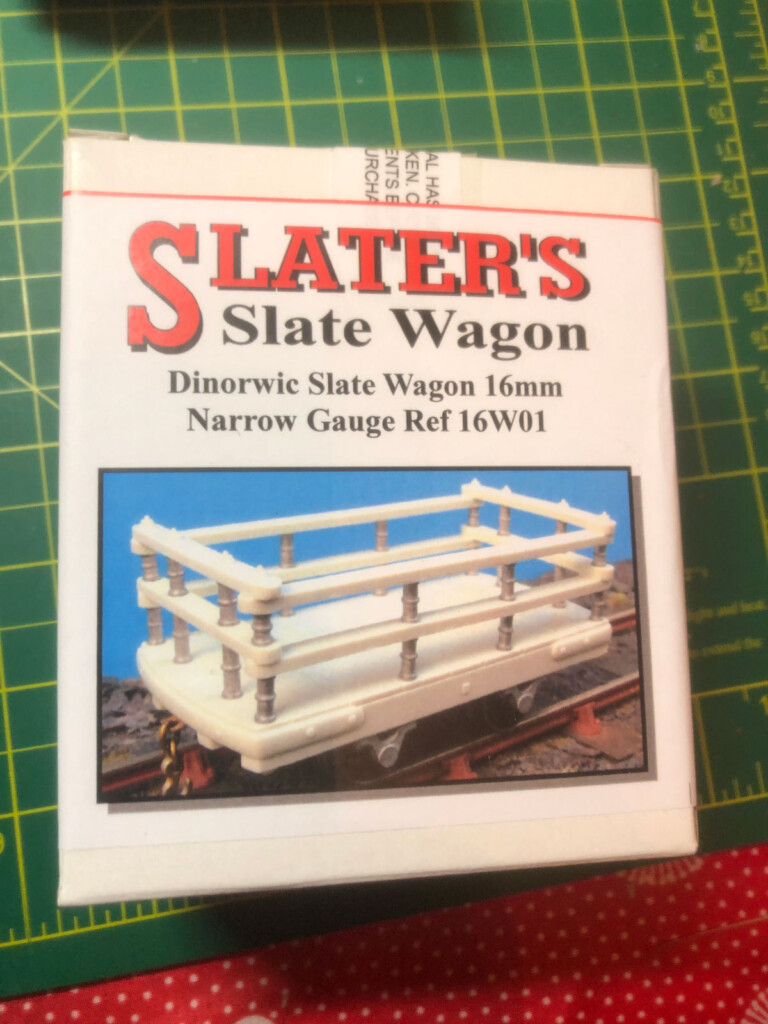 The plan was to build “Twll Mwg” (which I think is pronounced something like ‘Two-eth Moog’ and translates to “Smoke Hole”). There is another slab wagon “Abyssinia”, which is mechanically very similar, except for 4 lifting/ lashing straps near each corner.  There was one major reason for not doing Abyssinia; I’d be hand-painting the solebar wording and thought painting “Abyssinia” by hand would be a challenge too far!

For those that haven’t tried Slater’s Dinorwic kits, they are a doddle to build, but I would echo their recommendation to use MEK solvent adhesive, rather than the more widely available polystyrene cement.  It’s not impossible to use the latter, but the capiliiary action of the former is highly impressive and much neater.  I’m not going to detail how to build the kit here… just what to do differently.

First step is to build the chassis, which is only two main parts, stuck together with MEK. Slater’s advise to leave for a couple of days; I’m impatient, so 24 hrs is all it got.  What the following picture shows is kind of a ‘before and after’: to the left is the ‘as received’ condition, whereas to the right is what we need to achieve.  You’ll also notice that the 4 holes at the sides of the deck have been filled with polystyrene filler (i.e. Humbrol).  Not essential, but this is in case I chose not to add deck planking later.

So, how did I manage to add those nuts and washers?  I just moved them from the top rail to the deck.  Sounds easy… and it is less difficult than you might imagine.  The nuts and washers are moulded into the top rail moulding.  You can get them off by using a sharp chisel.  And I do mean ‘sharp’.  You just pare off the bit you need.  At this point, I should point out that the word “just” is the most feared word by engineers, but if your chisel is sharp, this step is fairly easy.  Just make sure that you have something solid to push against.  DO NOT use your hands or other bodily parts. 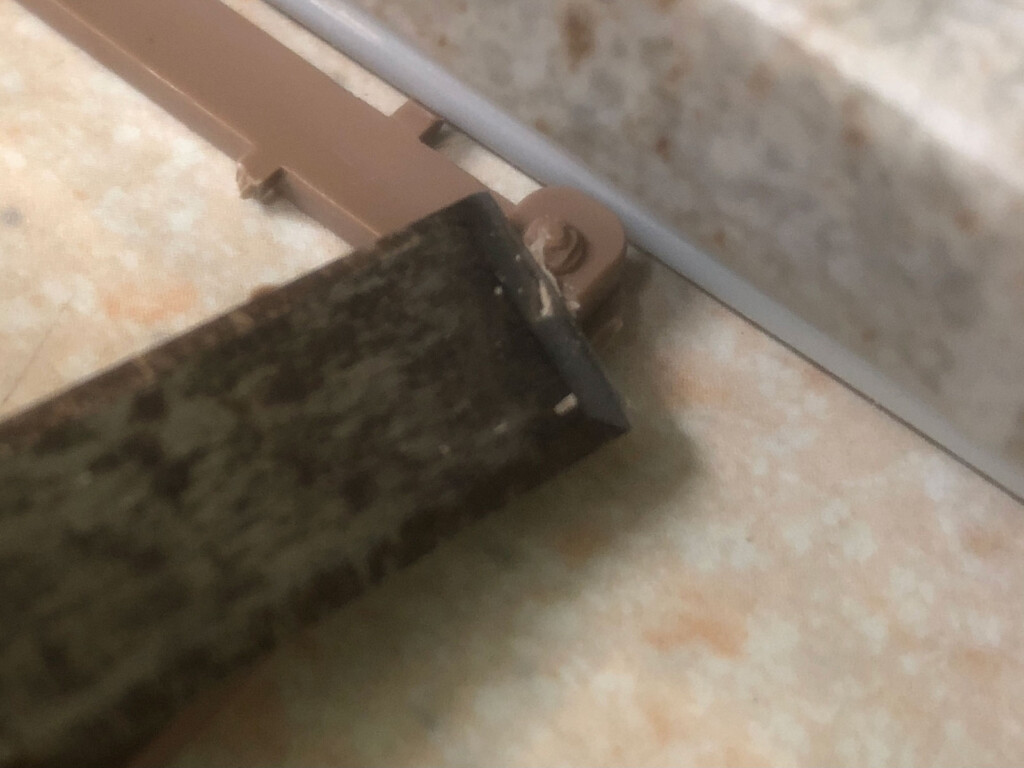 Once pared off, you’ll be left with eight things that look like the picture below (if you can make it out!): 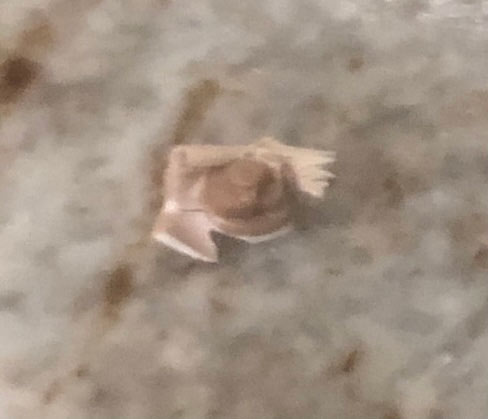 Now they all look a bit tatty around the edges, but we will sort that out next.  Using a scalpel (with a new blade!) carefully trim around the washer feature… 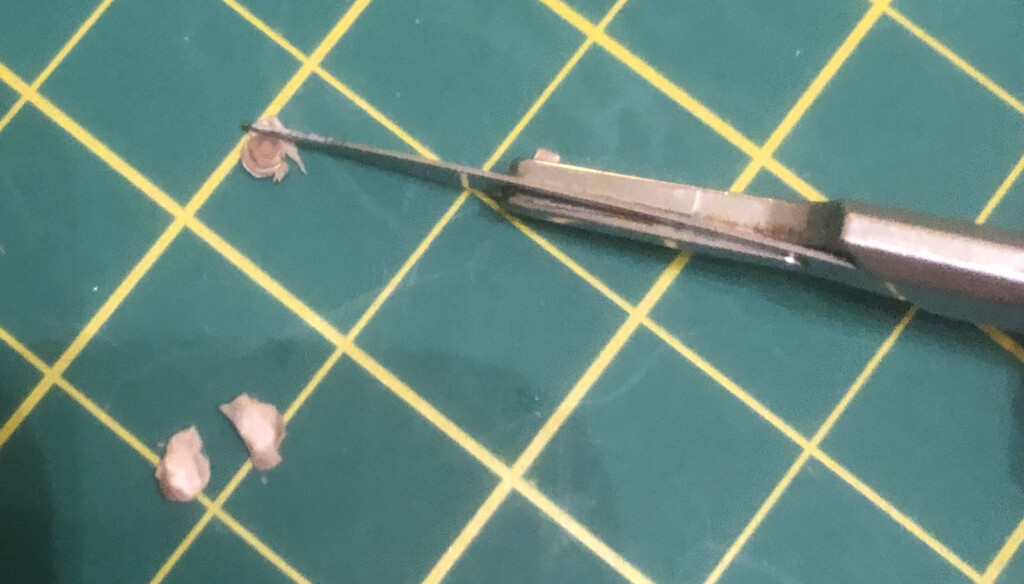 … and then ‘thin out’/ flatten the underside of the nut & washer on a sharp file, or even sandpaper.  If you go the file route, move the nut/ washer the ‘wrong way’ on the file… you’ve next to no chance going the ‘right way’. 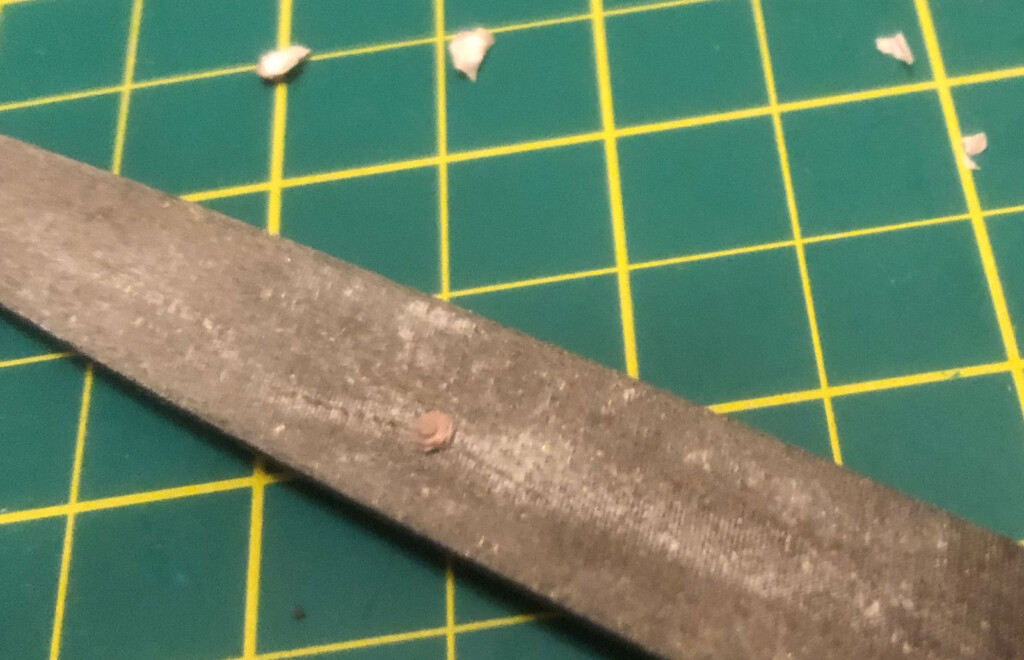 Once you’ve done all eight, you can glue them over the eight holes in the chassis deck.  Again MEK is best for this, but it can be done with poly cement. Try to get them in line whilst they are still adjustable (poly cement gives you more time to do this).  The next photo shows where we are up to: 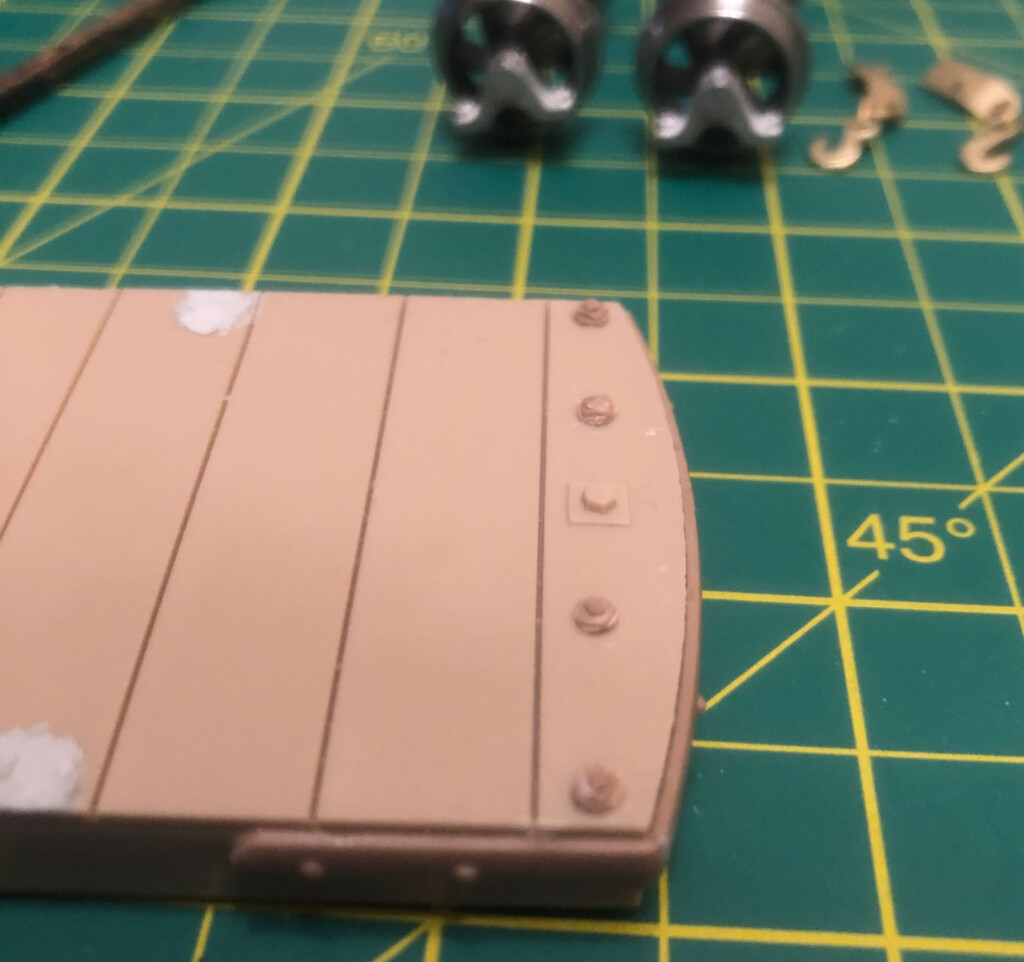 Once I’d got to this point (and had fitted the buffing strips to the chassis), it was time to paint.  Nothing sexy, just Halfords rattle can red oxide primer.  I have a little crocodile clip on a stick, which is great for holding the central bar on the underside of the chassis whilst you spray it.  To avoid a bare patch, I clip just off centre for spray pass 1 and move it for spray pass 2.  Well, it works for me!

I like to leave it 24 hours at this point for the primer to harden.  The image includes one of the deck planks trial placed, whilst still thinking about the overlays. 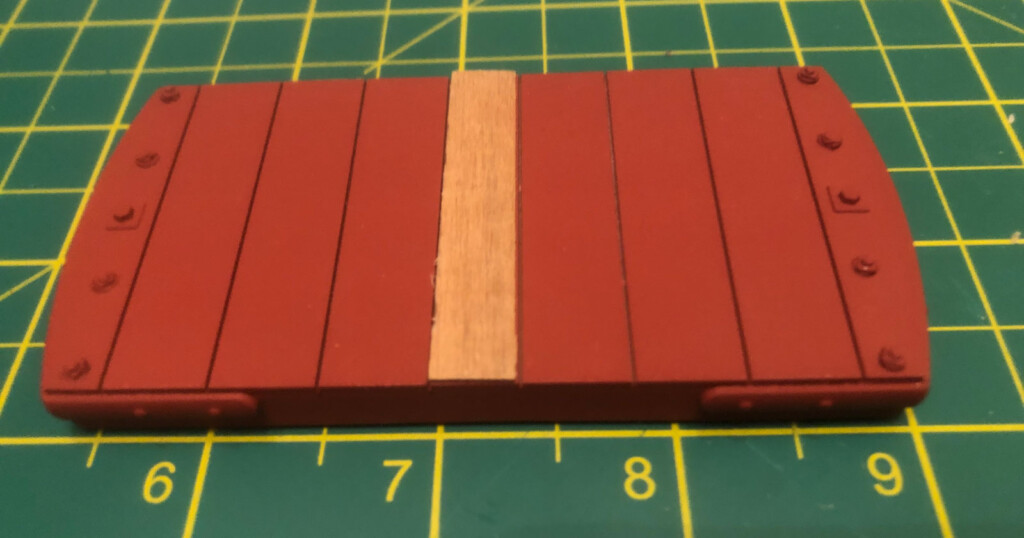 Next comes the lettering.  I’ve kinda described this before (you need to look up MoM for the Ffestiniog brake van no 6), but I’ll do it again, because I’m not a fan of cross-referencing.

I use Tamiya masking tape to define the upper and lower limits for the text.  This has its pros and cons (as you’ll soon see). 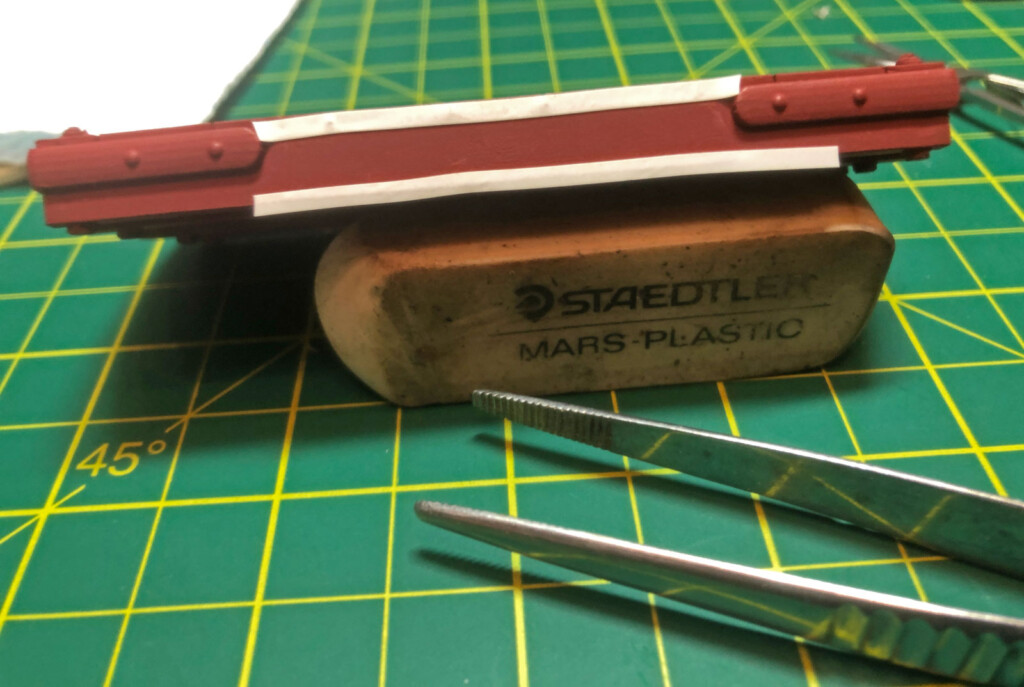 Pencil guide text where you want it: 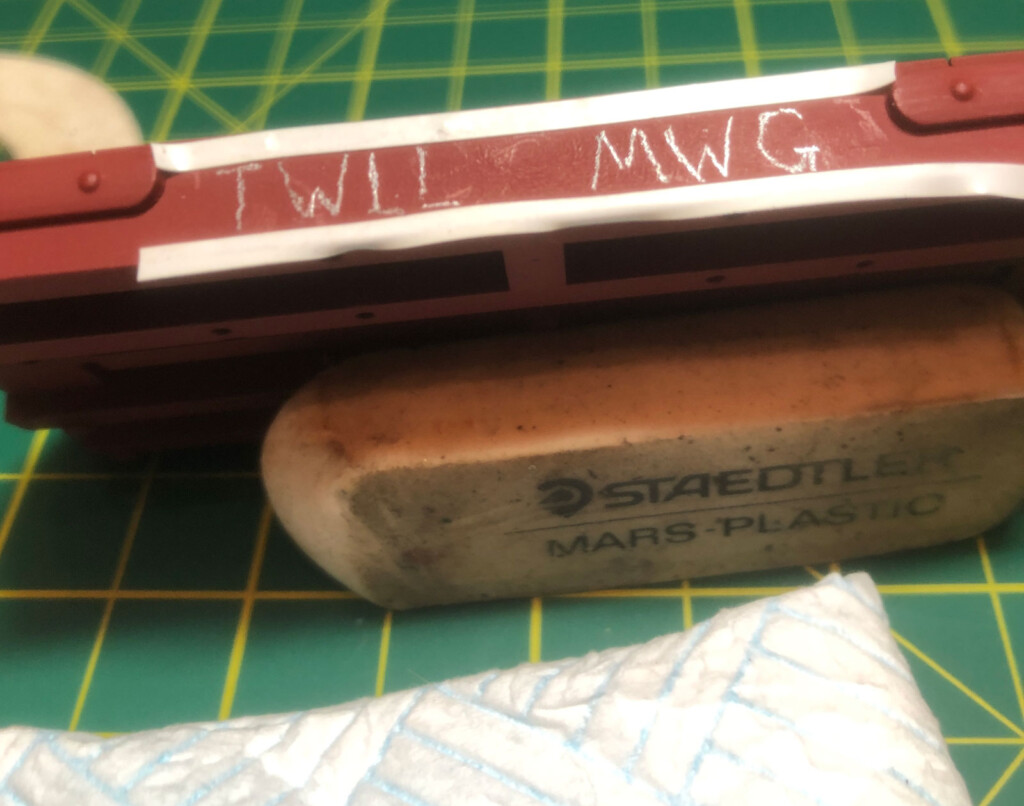 And now get out a fine paintbrush. The one I used for this is a Humbrol No1. Now, I have a set process for this (using Tamiya products) before you apply brush to model: 1) dip brush in acrylic thinners, 2) wipe brush on kitchen towel, 3) dip brush in paint, 4) lightly wipe excess paint off on kitchen towel, and 5) apply to model.  The image below is after 2 coats of paint.  I use matt Tamiya paints for lettering: they dry quite quickly. 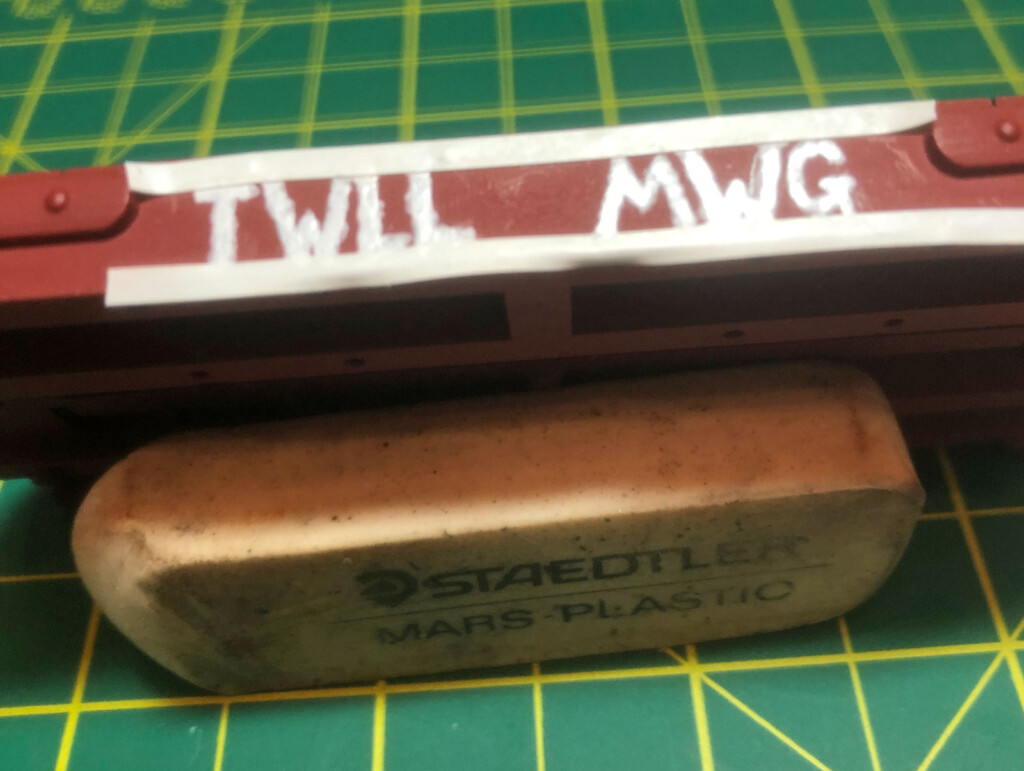 Once we remove the tape, the cons become apparent! 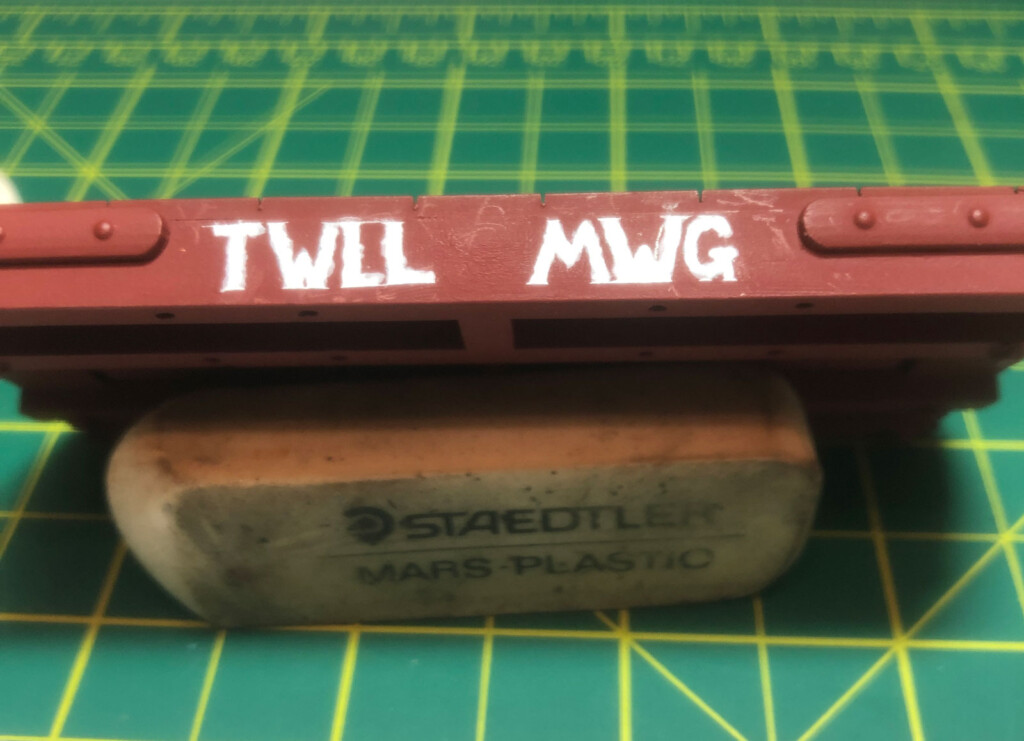 The white paint can ‘bleed’ along the tape edge.  Not to worry, though, as this can be fixed.  ‘Harvest’ some paint from the Halfords rattle can by spraying into the can cap at an angle.  I had some spare, cleaned Tamiya paint bottles so used one of those since the red oxide won’t last long in the open air.

I have a brush that I’ve had since I was a lad and it only has a few bristles left (the blue one, see below).  It’s great for tidying up the text somewhat with the red oxide paint. 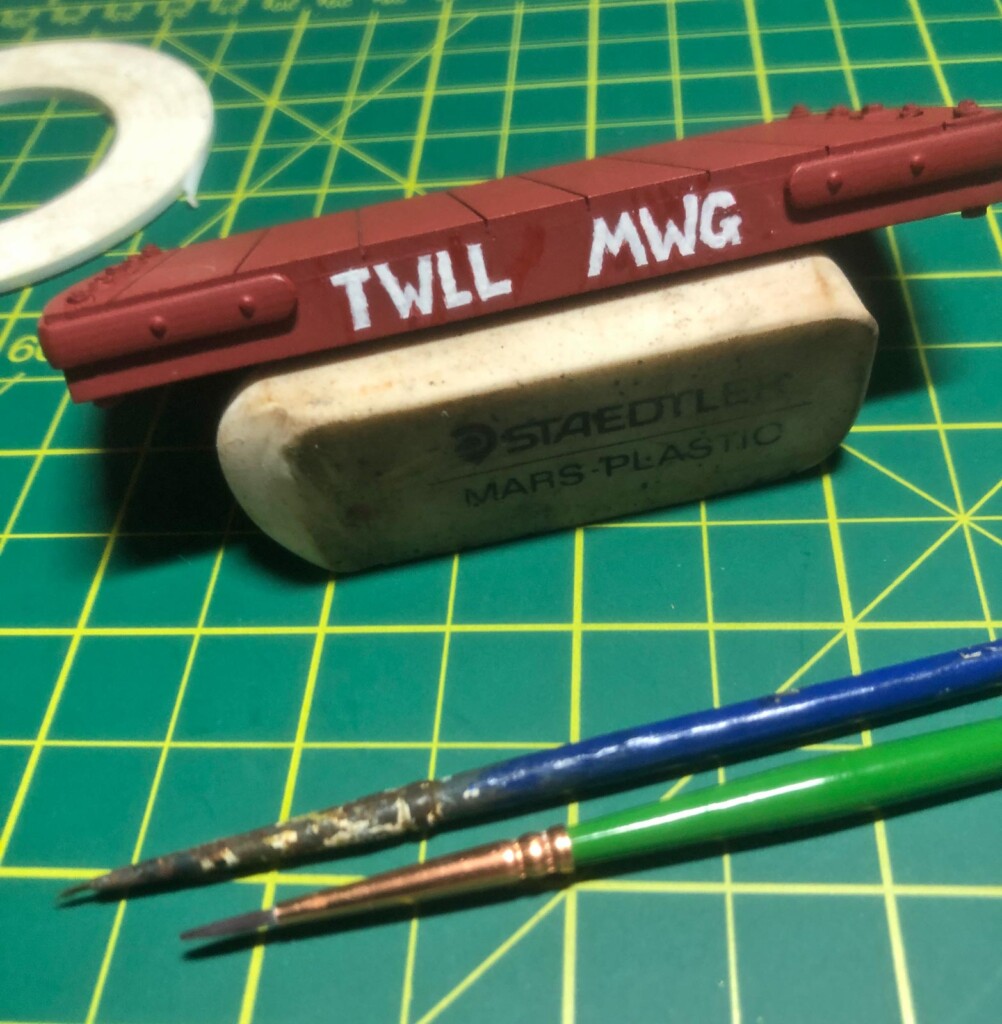 Once you’ve done this, you can set about the other side! If you were like me, you’ll have built up and painted the axles and couplings, ready to fit.

Now you could leave it at that, but the museum exhibit has some plank ‘overlays’ on it (which are probably later additions), but I thought I’d add those too.  Rooting in my model boat strip wood, I came across some pale walnut strip about the right size.  The walnut strip isn’t exactly the same as the plank width on the deck, but nor are those on the real thing.  Once cut to length, I epoxied these to the deck.  They are intentionally somewhat wonky, as per the originals. 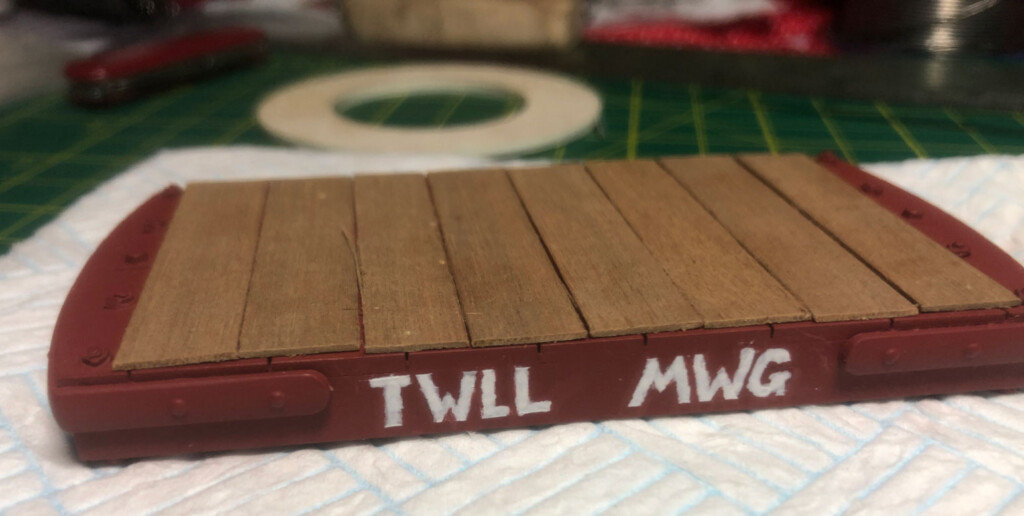 Now was a good time to fit the axles and couplings with epoxy. I wanted to blow it over with matt varnish, but not really the right weather for airbrushing, so that can wait until summer. 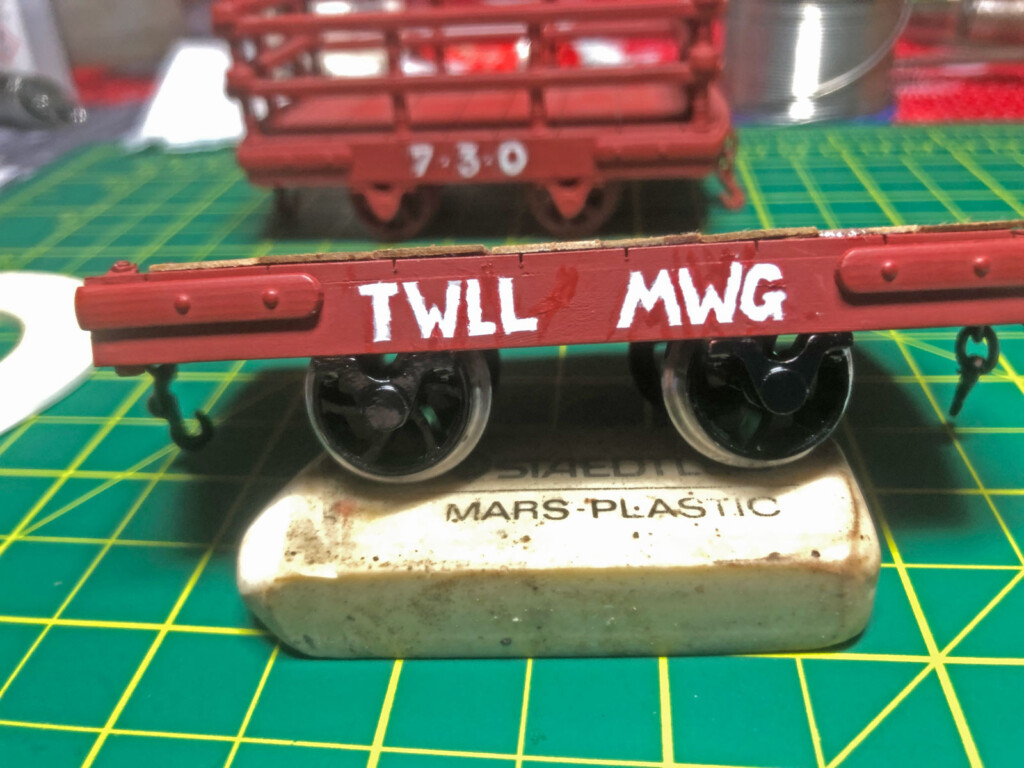 And that’s about it.  I actually like the end result and it’s pretty close to the real thing.  It was also quite a quick build too.  I’m thinking of doing “Abyssinia”: the lifting straps are easy to do, only needing a little filing to fit to the chassis.  The lettering, on the other hand, will be tough, so Letraset or similar will be used for the text.  Twll Mwg paired with a finished slate wagon (see below), looks pretty good. 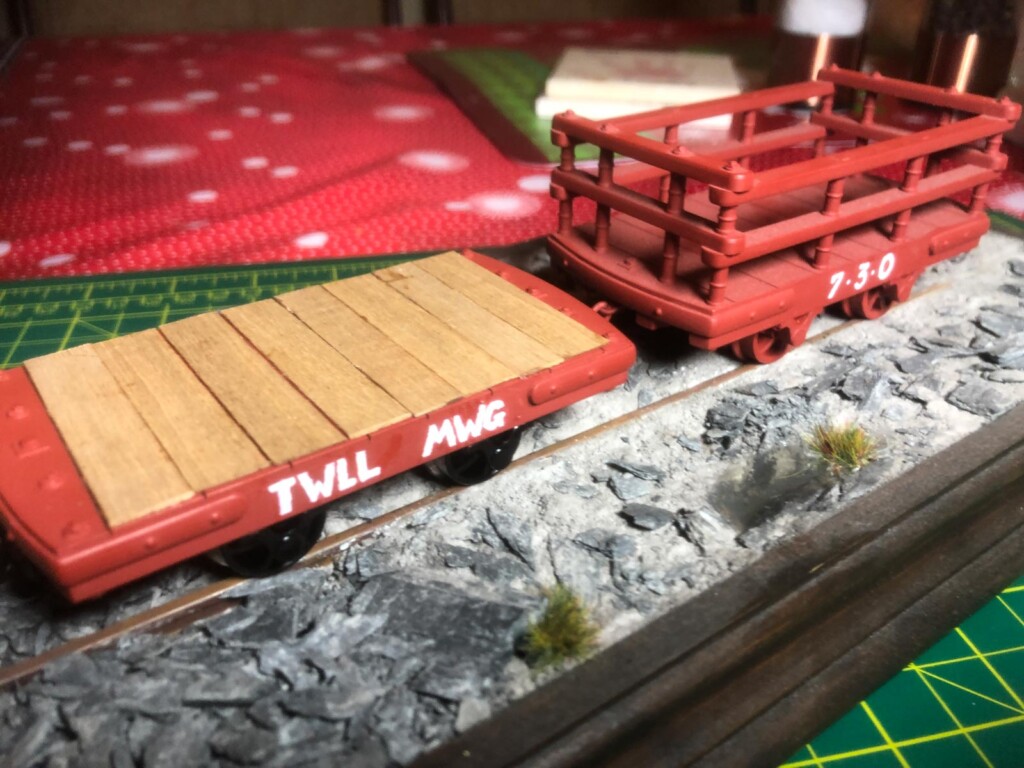 I’ve still to cut a piece of slate to add as a load.  I have a big lump in the garage that I can hack a lump off…

As with all my ‘MoMs’, the aim is to inspire.  I know some refer to this as ‘kit bashing”, but I’m not keen on the term.  All we’ve done here is a few simple(ish) mods to a great kit that gives a different end result that really looks the part.  I’m seriously thinking about modifying the same wagon kit to coal wagon ‘spec’: but that will be much more involved.