Above: “Dolgoch” shunting slate wagons on a damp November afternoon. Compare to this 1941 photo by W.A. Camwell.

I recently built two IP Tal-y-llyn slate wagon kits, but made a few modifications during the build that may be of interest to others, and these are outlined below.

The kits are very nicely detailed and are comprised of laser cut plywood sheets, cast white metal axle boxes, curly spoke moulded wheels with pre-cut axles and a set of plastic mouldings for straps, bobbins, hooks, bolt heads, etc. Out of interest I compared the wagon kits with photos and drawings in JIC Boyd’s book “The Tal-y-llyn Railway” and noticed that a few elements were slightly different in the kits. 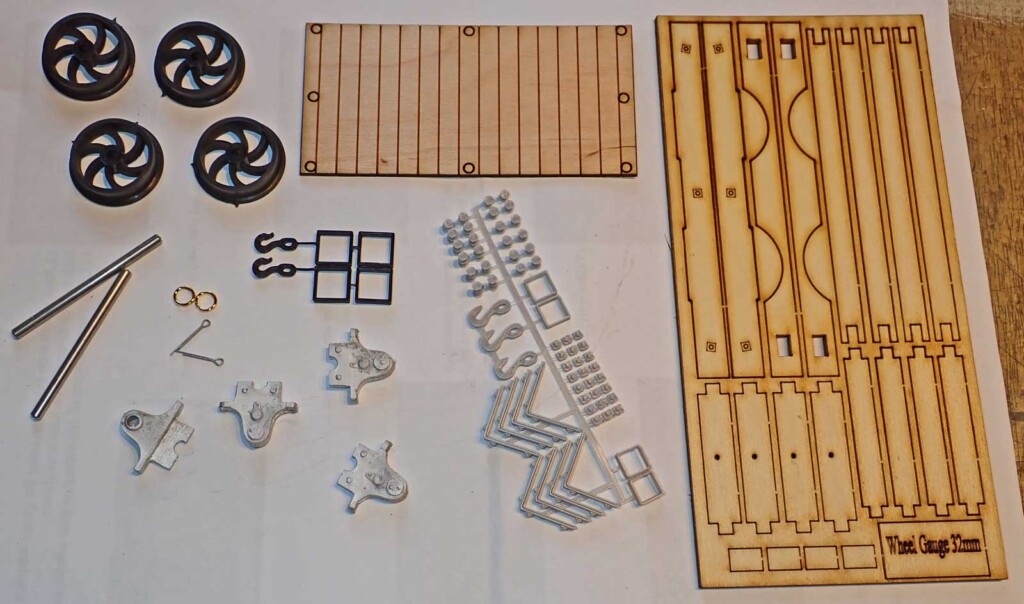 The kit of parts for a slate wagon

The kits are designed for 32mm gauge, and hence represent 2ft gauge rather than 2’ 3”, so the sole-bars and the width of the kits is slightly narrower than scale. Where possible these days I prefer to use wheels with metal tyres and so I decided to use Slaters wheel sets, with straight spokes (albeit Ffestiniog pattern rather than Tal-y-llyn), instead of the ones supplied by IP. The Slaters axles come with brass bearings (the IP axles bear straight into the white metal) that will pop into the white metal castings nicely, however, these axles are slightly longer than those supplied by IP and so wouldn’t fit comfortably between the axle boxes as designed. My solution was to glue the two parts of each buffer beam slightly staggered apart so that the sole-bars would be further apart. This change is hidden by the extra piece of ply used to make up the buffer heads, and the sole-bars will still fit within the width of the floor. 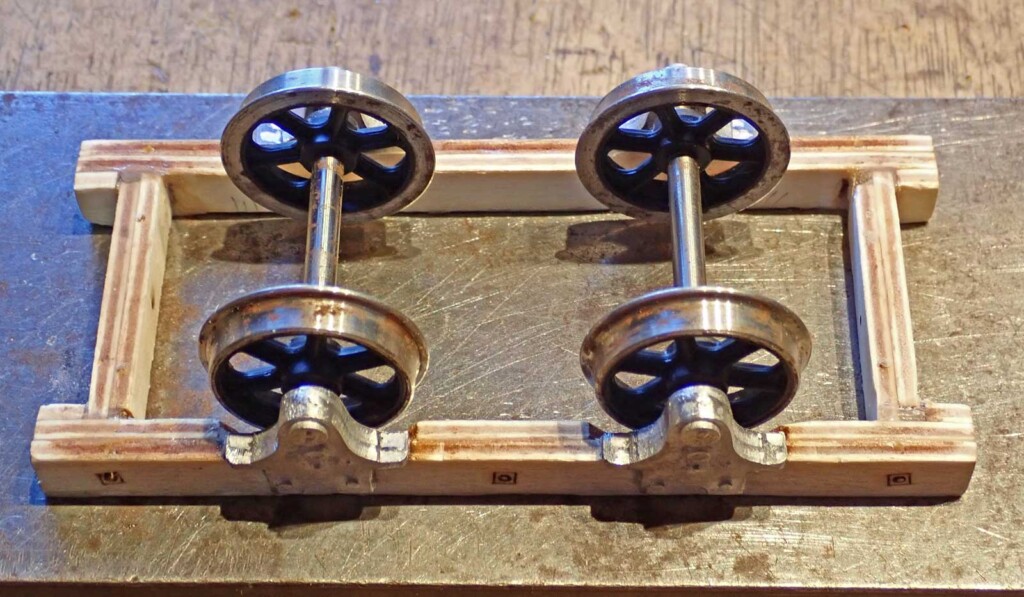 The chassis with Slaters wheels

One significant difference is that the slate wagon kit is marked out for one set of bobbins on each side and each end, plus the corners (i.e. 8 in total), whereas the drawings and photos show two sets on each side and the ends, although the kits do come with enough mouldings to add these extras. However, reading through the instructions and looking at the little plastic moulded bobbins I wondered if I would be able to assemble these evenly between the slatted sides, and whether the glue bonds just on the ends of these mouldings would be strong enough to withstand the rough and tumble of my “ten-thumbed” handling out in the garden. Most likely my concern was completely unfounded, but I decided I would try to make my own bobbins using short lengths of 2 mm brass tube, 12BA washers, and lengths of 1.2 mm piano wire that would run through holes in each set of slats, the floor and the sole-bars. 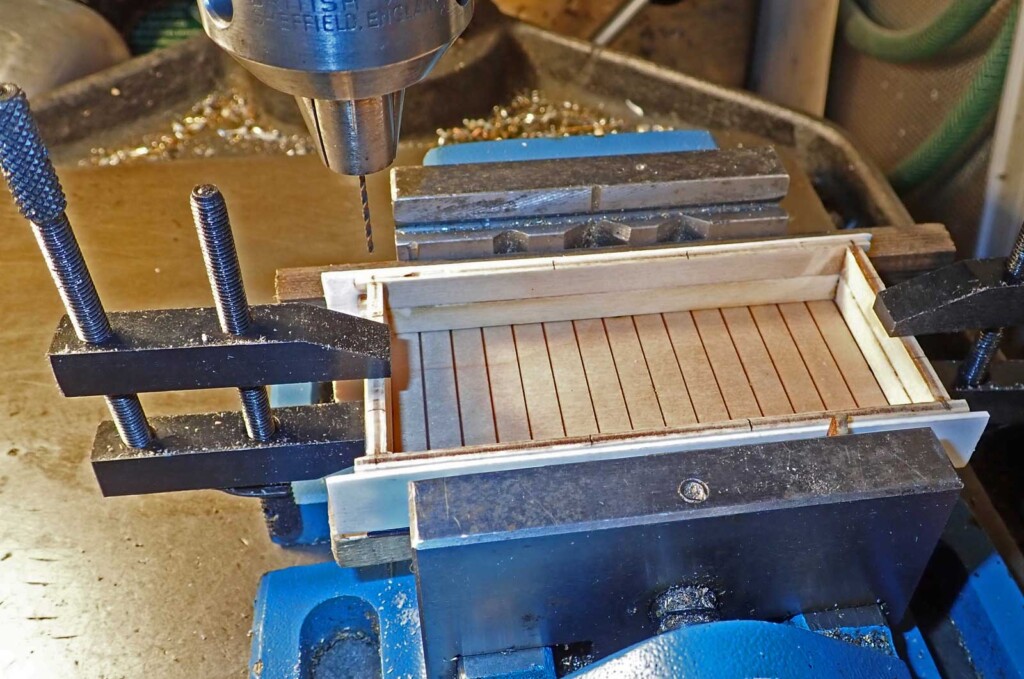 Slats and floor clamped together for drilling holes for the wires

The drilling would need to be done carefully as the hole would have to go through the middle layer of the thin ply of the slats. The two sets of slats were first made up in accordance with the instructions. These were then clamped on top of each other and onto the floor plate in the required positions, and marked out for 12 wires. They were drilled right through all the pieces using a No. 56 drill in my vertical drill press. Success! To allow for any errors in drilling, the two sets of slats and the floor were marked so that the holes would re-align properly during construction. The holes in the lower set of slats and the floor plate were then opened up to No. 55 using a pin drill and the holes were transposed from the floor to the sole-bars once these were constructed, and which were also drilled No. 55. This meant the piano wire was a stiff fit in the upper slats but could be threaded onto the remaining pieces.

To cut the piano wire I used a Dremel with a thin metal cutting disc. The depth of the sole-bars are thick enough to take up any slight discrepancies in length as the rods wouldn’t come right through the sole-bars, to avoid interfering with to the axle box fitting. With the stock piece of wire held in the vice, the first few cut lengths spun off and onto the workshop floor: some were never to be found again!! To make the cut pieces easier to find I simply clipped a crocodile clip onto the piece being cut so that I could see it on the floor. 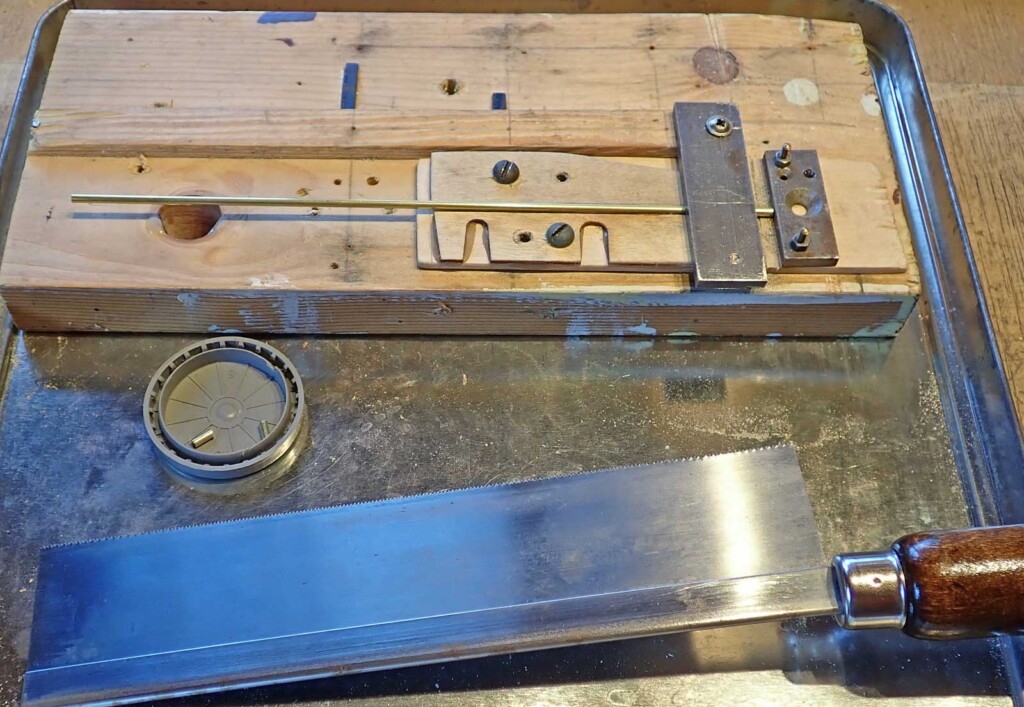 To cut the lengths of brass tube for the bobbins I made up a simple jig. The length was set by two short lengths of steel bar bolted onto some scrap wood and with thin ply stuck on to hold the tube steady for cutting – the photo should help to explain this! This jig was adjusted to suit the two lengths needed for top and bottom bobbins. The cutting was carried out with the jig sitting in a biscuit tin lid to catch the small pieces. For each bobbin the end of the stock tube was first cleaned up and then cut with a razor saw. The sets of bobbin pieces were filed to the same lengths (one set a little over 2 mm and the other at about 1 mm longer) and the ends cleaned up by popping each piece over a short length of piano wire held at the right length in an engineer’s clamp – again, the photo should help. 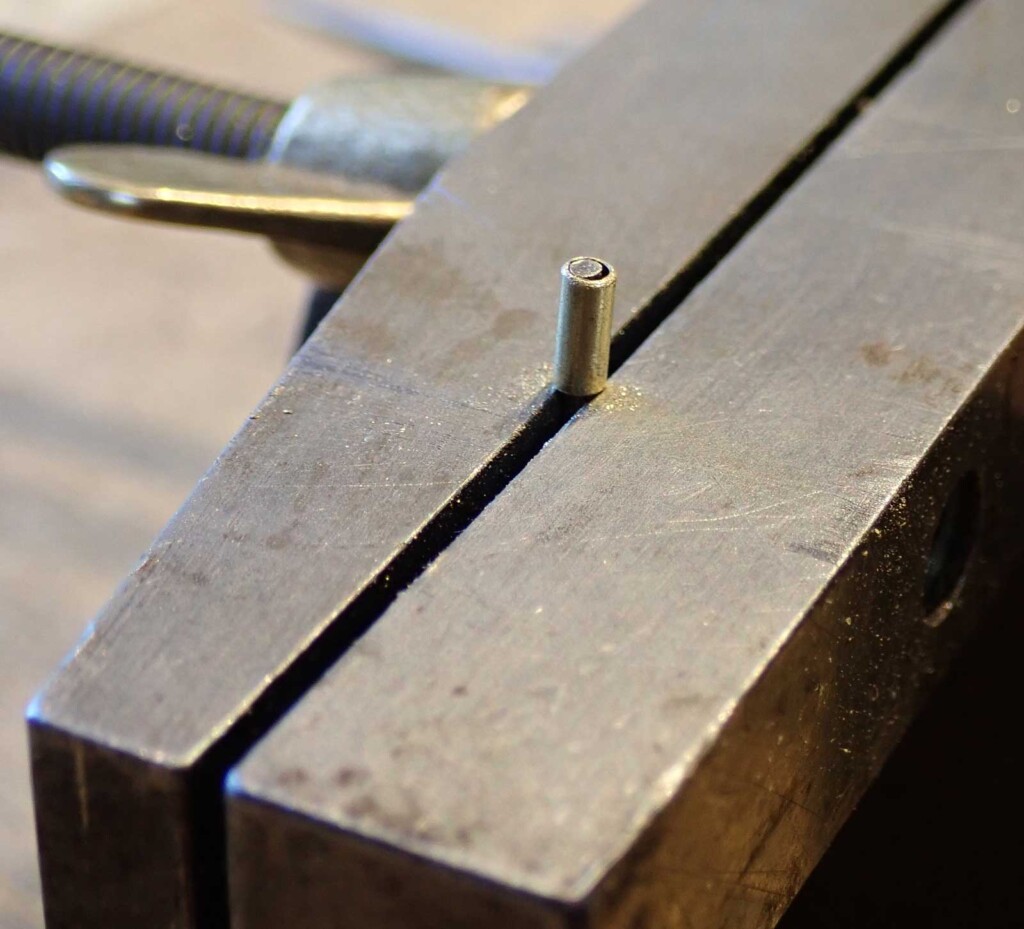 Method for checking length and cleaning up bobbin tubes 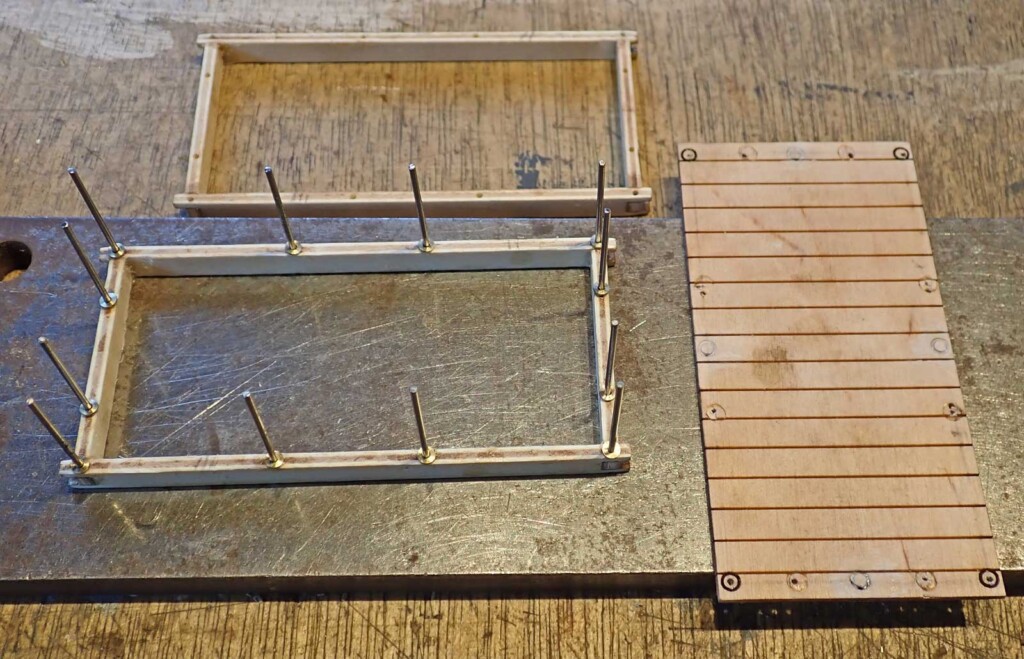 First stage of assembling the slats and bobbins

The laser-cut marks in the floor for the unused bobbin locations were filled in and then the floor was glued into place. The bobbins are not perfect, but they pass the 6 ft rule out in the garden! Boyd’s book shows examples of bobbins with and without the extra “washer” in the middle of the upper set, so I was happy not to try to replicate this detail. Once the chassis had been made up with the axles in place and running smoothly, the sole-bars were threaded onto the wires and glued into place on the underside of the floor. 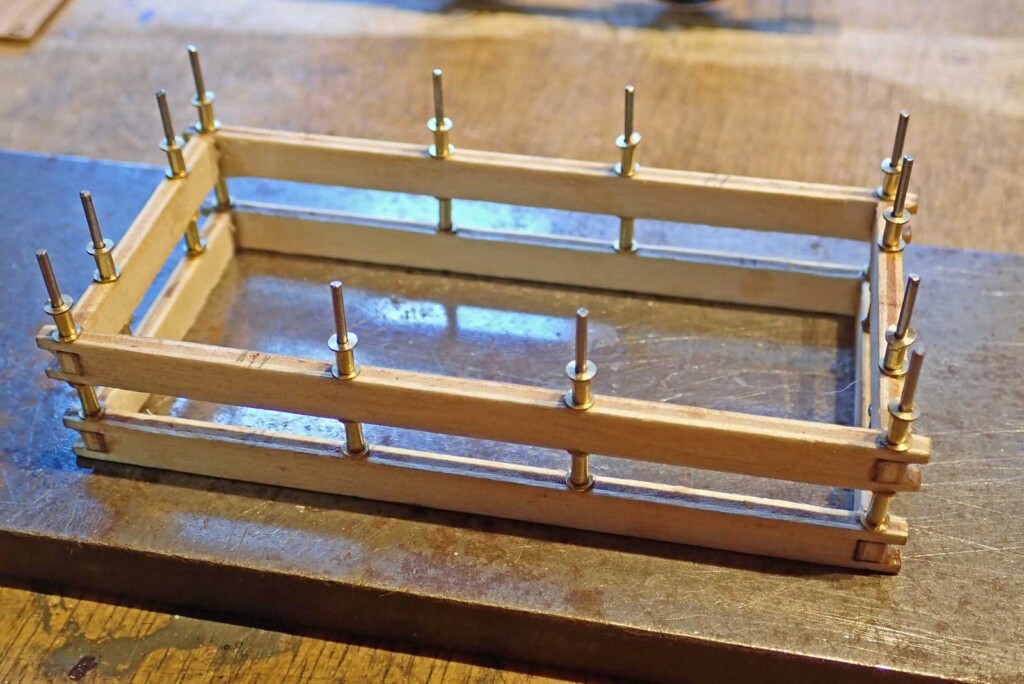 Ready for the floor to be fitted

The holes for the split pins provided for couplings in the kit were, of course, no longer central, due to my adaptation. I used parts from some spare Coopercraft running gear kits that I’d bought for another project, but which never got started, instead of the IP pins and loops. The coupling bosses were cut down slightly from the Coopercraft set and glued into new holes in the buffer beams, with brass wire D rings bent to shape and fitted. The buffer head straps and the corner straps for the slats were glued in place and, finally, bolt heads/nuts were glued on the sides of the sole-bars. I didn’t glue these bolt heads onto the top slats as it seems many of the full sized wagons had recessed heads to avoid damage to the slates. I provided wire hooks for 3 link couplings on these wagons as I usually find the hooks and D rings too awkward to use in the garden. 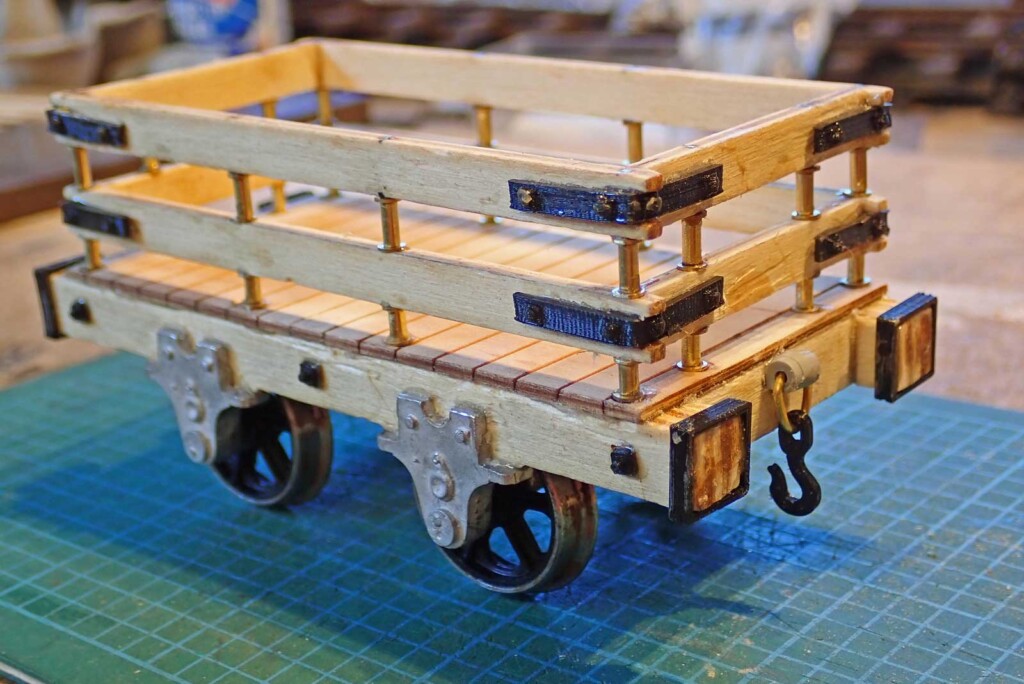 I used epoxy glue to build the wagons and small amounts of glue overspill needed to be cleaned up, during which process I was also able to “distress” the timber work. I found it necessary to apply two coats of paint to the timber work, with a light rub down between coats to remove the raised grain on the ply. I should perhaps note that the painting of the bobbins was a lot more fiddly and time consuming than making them, and by the time I’d finished I was glad I had only bought two kits to build! I think a little light weathering would enhance these wagons and also help to cover up some of my painting errors: a job for the winter months perhaps. 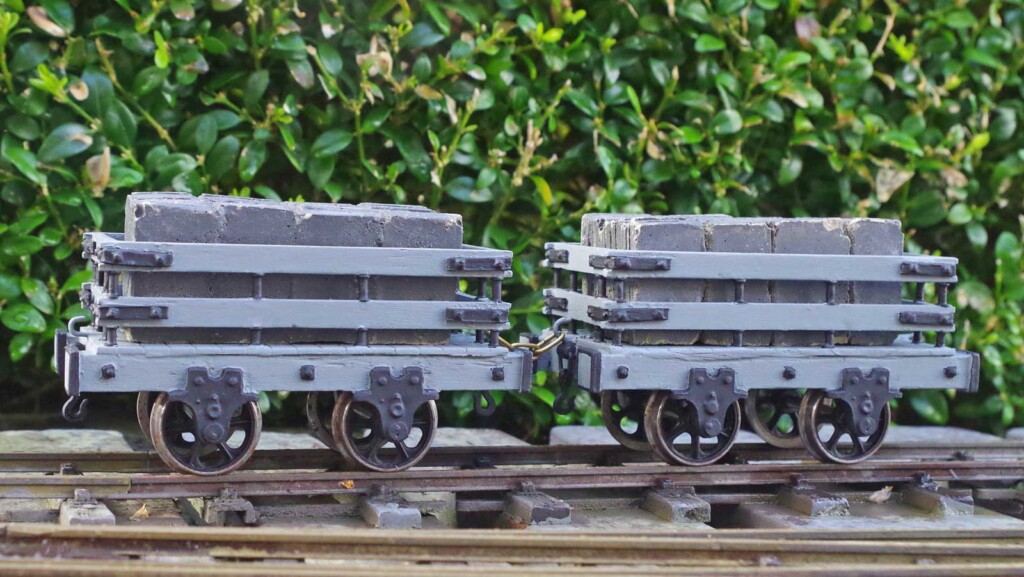 Slate wagons in use