Photo 1. A trainload of happy holidaymakers.

A few years back I bought a couple of kits for Groudle Glen carriages from Yatton Model Engineering. At last my 16mm scale locomotives based on Groudle Glen Sea Lion (steam) and Polar Bear (battery) had matching stock to pull. For most of the time since then the carriages have run either devoid of passengers (oh so empty) or with a few seats occupied. I used 4” figures representing the crew from the Love Boat TV series, and similar sized soldiers from Pound shops.  I never had enough of these figures to fill a coach, and they were too large to sit side by side in these narrow carriages.

There are excellent figures available from our suppliers but the range of suitable seated ones is somewhat limited. To fill the coaches I would need 20 people and ideally they would all be different. I had for some time wondered whether I could 3D print people as I have a Prusa i3MK2.5S 3D printer.

You can find quite a number of 3D figures suitable for 3D printing on web sites such as Thingiverse. However I found only a few seated figures there. Eventually, whilst looking for miniature war game figures to print for my grandson,  I came across reference to Makehuman software for creating 3D human figures. This is free to use to create 3D human beings for uses such as animation or 3D architectural models, or for my purposes to 3D print.

My first attempts to print Makehuman figures were encouraging but I soon found I needed to use other free software to get the results I wanted.  Blender can be used to adjust the pose of figures.  Meshmixer can be used to clean up the output files from Makehuman/Blender to ensure they are printable. The cleaned up file is then ready to run through a slicing program to create the instructions that tell a 3D printer how to print the figure as a series of layers.

I use an FDM printer that builds up a 3D object layer by layer from a reel of plastic filament. As usual with this type of 3D printing, when looking closely one can see the layers that make up the figure, but the result is fine when looking from a few feet away. Using finer resolution will reduce the layered effect, though printing takes longer. The layers can be smoothed with emery cloth if you have the energy and patience to do so, which I don’t! 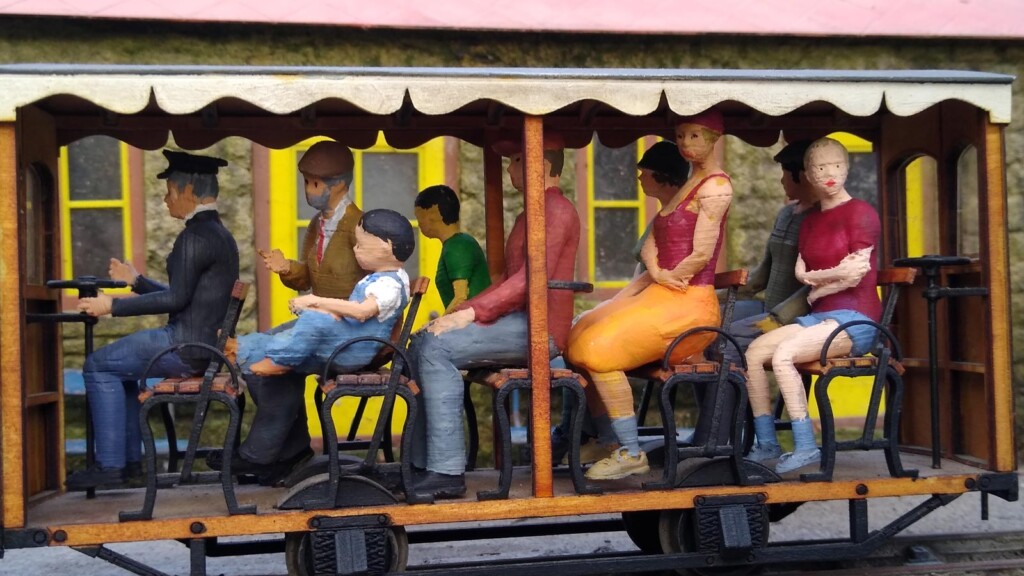 Photo 2. In close up you can see the layers of plastic.

Here are the steps I have been following to create the plastic people in the photos. Maybe if I read the manuals, instead of diving in and clicking tabs to see what happens, I might find better ways to achieve the same result. 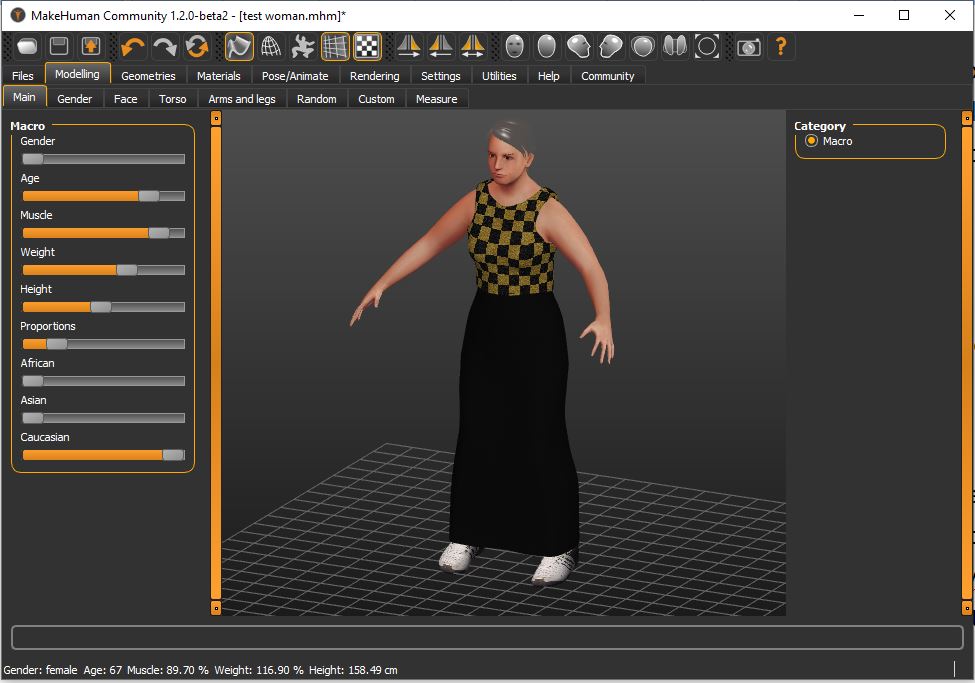 Photo 3. This female figure has been created with specified age and clothing in Makehuman.

Similarly there are some built in poses which you can use through the Pose/Animate tab. More poses can be added via the Community tab. The next photo shows the default sitting pose. 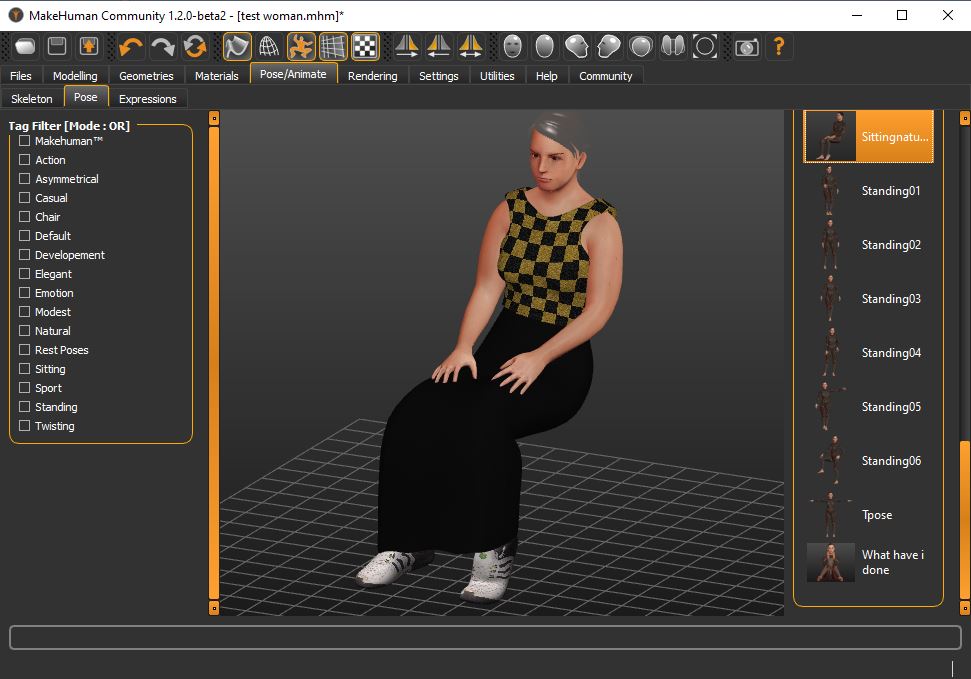 Photo 4. The figure is now in a default sitting position in Makehuman.

If you now export the model you have created as an STL file, you are likely to have difficulty printing it. Your slicing software may tell you there are errors in the file. You can usually fix these errors with Meshmixer (see later). A bigger problem though is caused by the model having an oral cavity. This void leads to problems printing – the lips are too thin and don’t print and the resulting printed face looks horrific. For the first few figures I filled the void with Milliput after printing but there is a better solution. The Geometries tab in Makehuman allows you to select a simplified topology made up of fewer polygons and these omit the mouth cavity. To see what effect this will have, click the Wireframe icon at the top of the screen. Make sure you also click the Smooth icon else your print will be very blocky, as can be seen from some of the figures in the second photo, where I had not selected this option.

At this point I thought things were looking good, but my wife pointed out that everyone I had printed so far looked the same. All were in the same attitude looking straight ahead with hands on their knees. I needed some variation in poses. This is where Blender software comes into play. Blender can be used to create animations but we can also use it just to alter the position of our model’s arms and legs and to twist the head left or right. To do this you need to select a Skeleton from the Pose/Animate tab in Makehuman. I suggest trying the simplified skeleton “Cmu mb” unless you really want a separate bone for every toe and finger. Export your file in Makehuman Exchange format (mhx2).

At the next stage in Blender you need to add the mhx2 import plug-in; details of this can be found in the Makehuman FAQ which you can get to via the Makehuman “?” icon. You can then import your mkx2 file into Blender and by clicking on a bone you can move it up and down and twist it. Once you are happy with the new pose, export from Blender as an STL file. 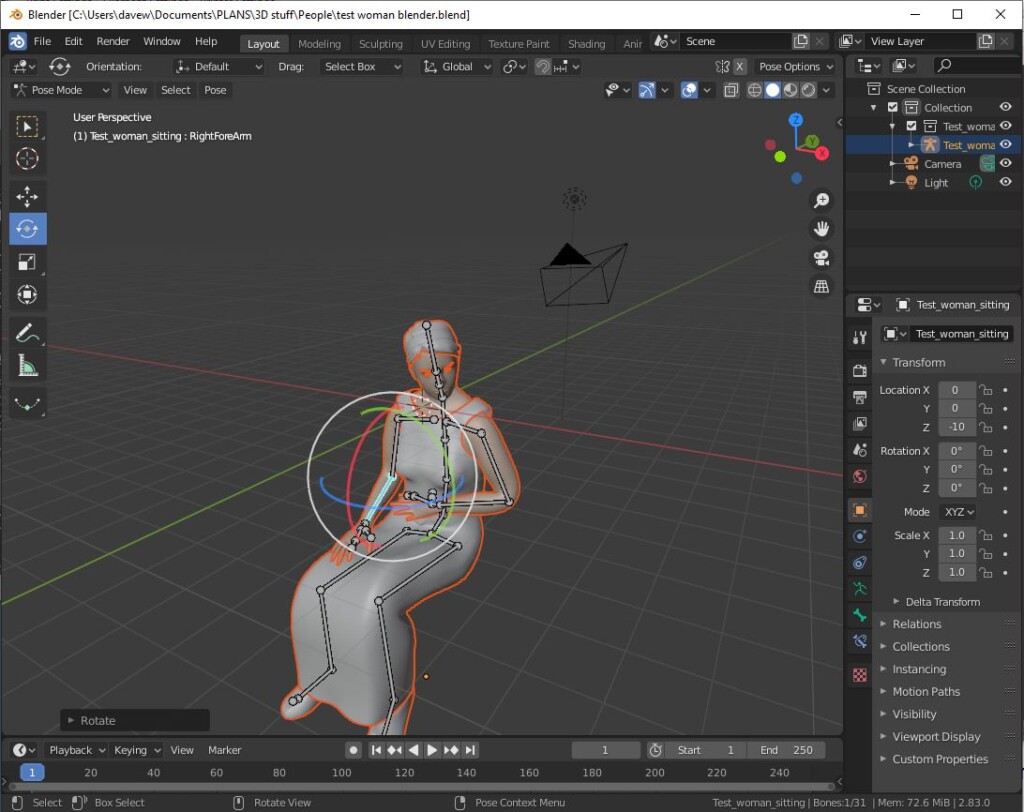 Photo 5. The pose has been altered using Blender software.

Our third piece of software, Meshmixer, comes into play to sort out any errors in the STL file and to ensure the model is solid. Hair and clothes may be such a thin layer that they do not print. Meshmixer can fix this. Import the STL file from Blender or direct from Makehuman into Meshmixer. Then select Analyse from the left side of the Meshmixer screen, followed by Inspector and then Auto Repair All. Export the repaired model from Meshmixer as an STL file. 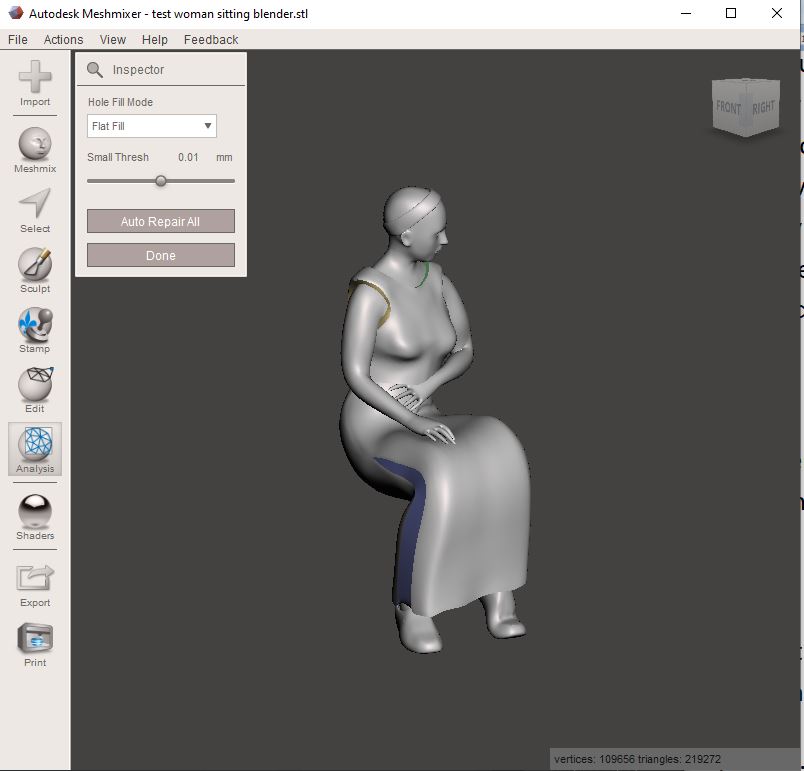 Photo 6. The figure has been made solid using Meshmixer so that it can be printed without error.

I use PrusaSlicer to generate the instructions for the 3D printer which are in Gcode. You can of course use your favourite slicing program. Support material will be needed for overhangs such as the arms and chin. These supports are removed after printing. 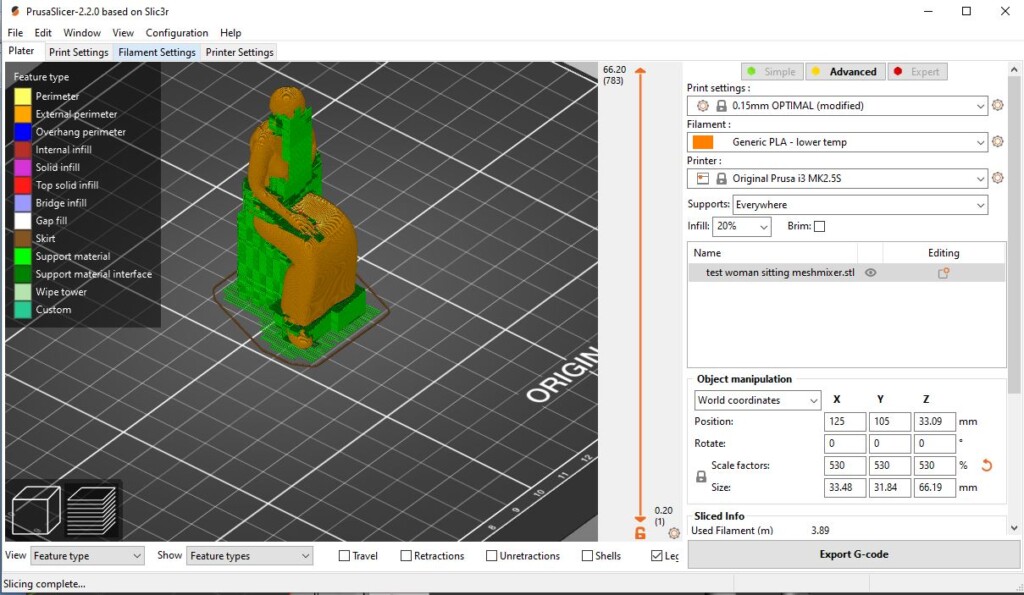 Photo 7. The figure has been sliced into layers ready to take to the 3D printer.

Watching your figure appear on the print bed as it is printed can be addictive. 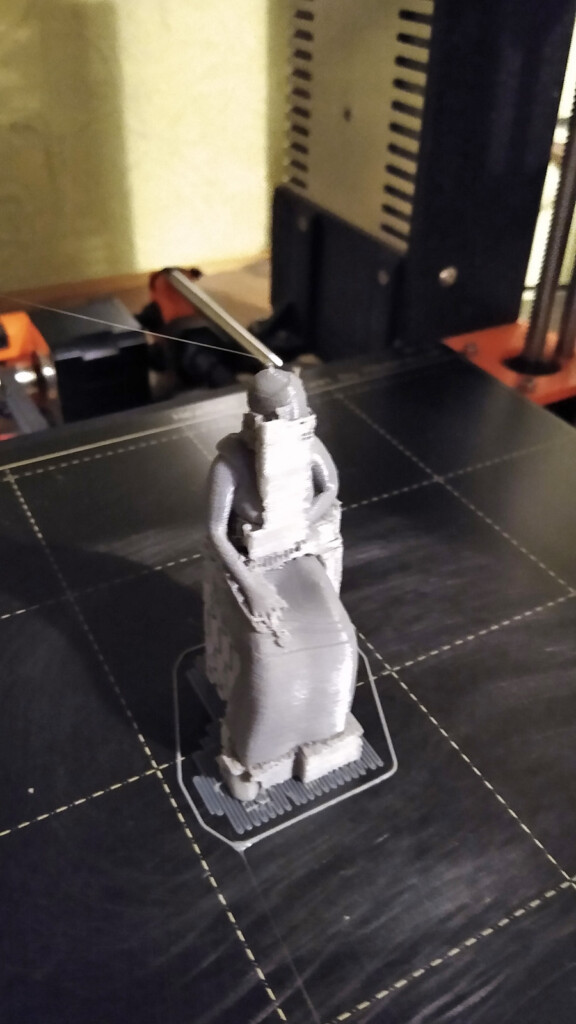 Photo 8. Figure as printed with support still in place.

After removing the support material the figure can be primed using car spray paint. I then use acrylic paints to finish. 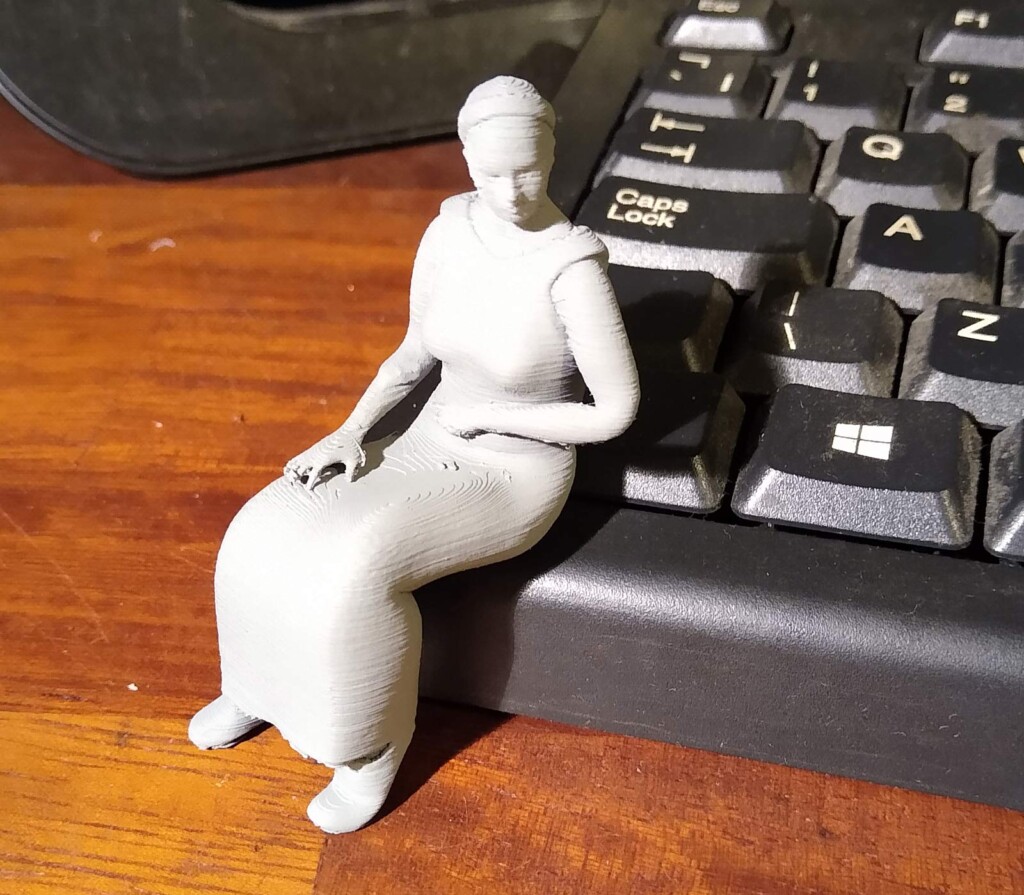 The primer is not essential, but does tend to smooth the layers to some extent. Acrylic paints can then be used to bring the figure to life. 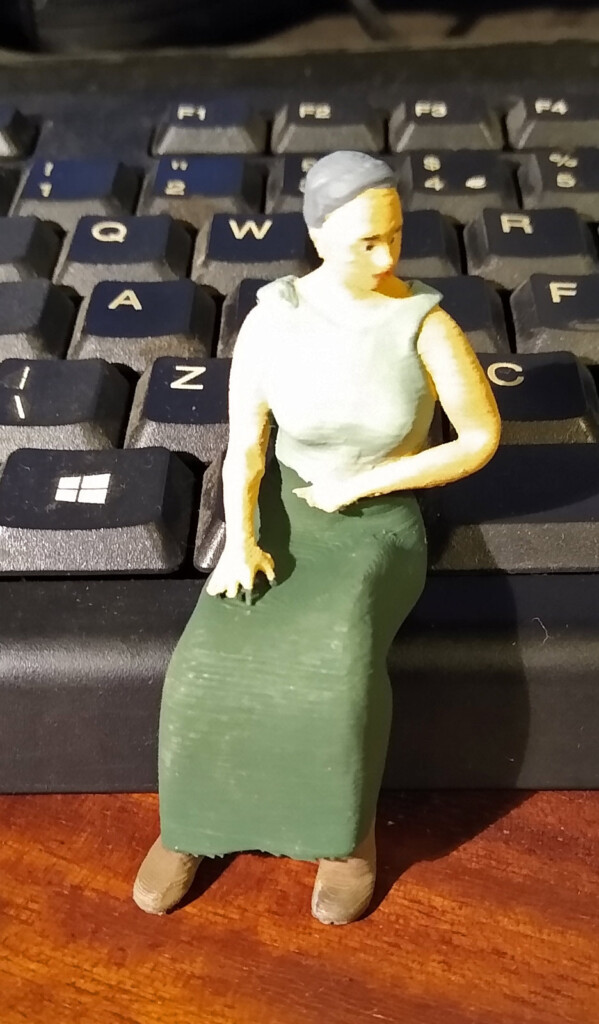 The process works to make standing figures too. 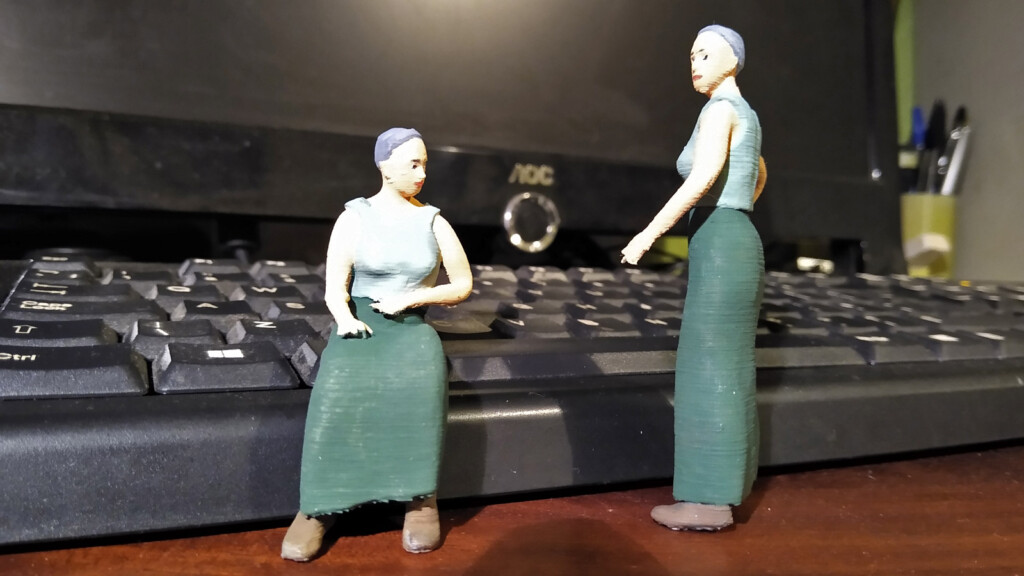 Photo 11. Are these twin sisters, or is this a fashion faux pas?

These plastic people are not perfect but they look ok from the usual distance at which I see my trains in the garden, and I am more than happy with result.

The software I used on a Windows 10 PC is listed below. All these apps are free to download and use. I notice that newer versions have been released of some of the software:-

3D figures that you can print may be found on http://www.thingiverse.com as well as other web sites.