I’d recently completed an IP Engineering Lister RT that had been languishing part-finished in the garage for some years.  It had done its shakedown running and all worked just fine, but I noticed you need fast and dexterous fingers to stop it.  And on AAA batteries the run time was a bit… er… limited.  After a visit from a 20 month old granddaughter where she was transfixed by the train running around an oval, it occurred to me that longer run time would be welcome as well as a more elegant method of “runnus interruptus”.

Stalking eBay, I came across LocoRemote; a diddy remote system that is designed for these 3v powered beasties and came with the benefit of being controlled from a mobile phone.  Now that would keep the granddaughter entertained!  I recall someone in SMT using an LED dimmer unit that would have fitted in the loco for a self-contained solution, but that wouldn’t address the run-time.  So, best compromise was to chuck a bigger battery and the remote into a wagon.  This had the additional benefit that, were I to build another small industrial loco, I could hook it up to that as well. Hmmmm…

Ok, I have a plan.  Now to find a suitable wagon.  Timpdon to the rescue with a nice-looking salt wagon.  I’m not going to describe building that, because it was very easy to build.  I only modified the roof to improve its appearance, and to allow it to remain removable to ease access to the gubbins inside later.  Timpdon recommend that the sides are not glued in place to remain removable, and I’d echo this suggestion. 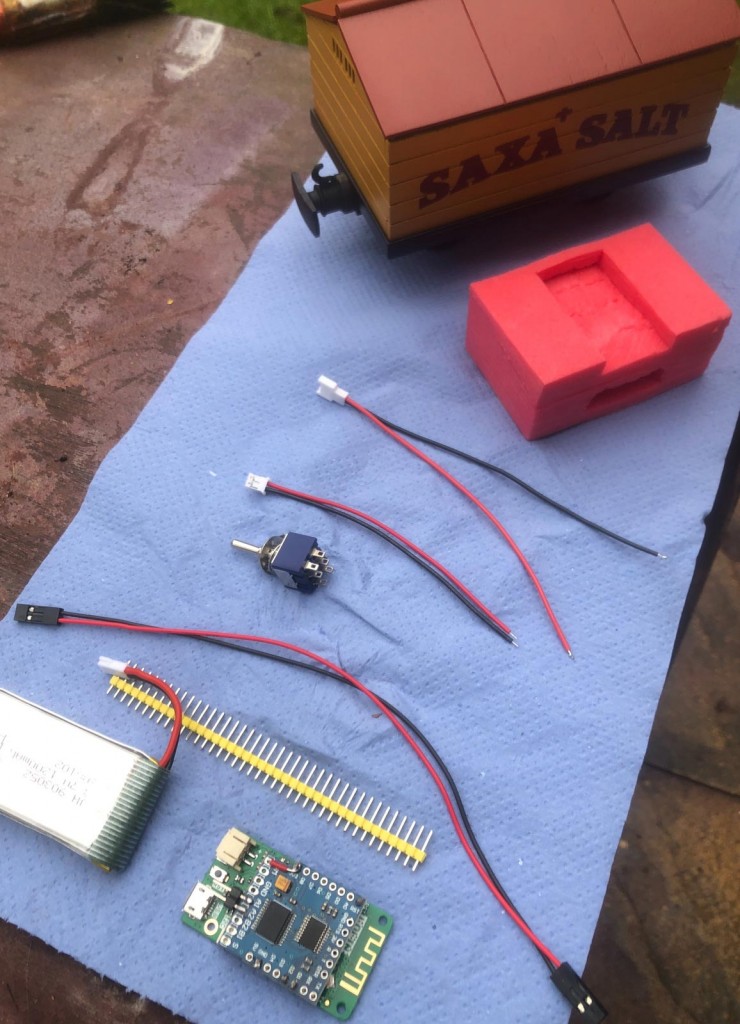 So bits needed aside from the wagon were: LocoRemote Slim, a strip of Dupont connector pins, LiPo batteries and charger, a switch, a block of high density foam and some bits of wire.  The wiring in the photo comes with the LocoRemote, so don’t worry about connectors.  The remote, switch, connector strip and batteries/ charger were all sourced off eBay, I built the wagon.

First job was to cut the foam block to wedge firmly between the wagon sides and holes carved into it to hold the battery and controller.

Next was  to fit the power switch.  I chose to poke it through the wagon floor in the corner so that I could operate it without taking the wagon apart.  I also fitted a bit of black shrink sleeving to the toggle to make it a bit less obvious (you could argue that it now looks like a bit of dangly brake gear). 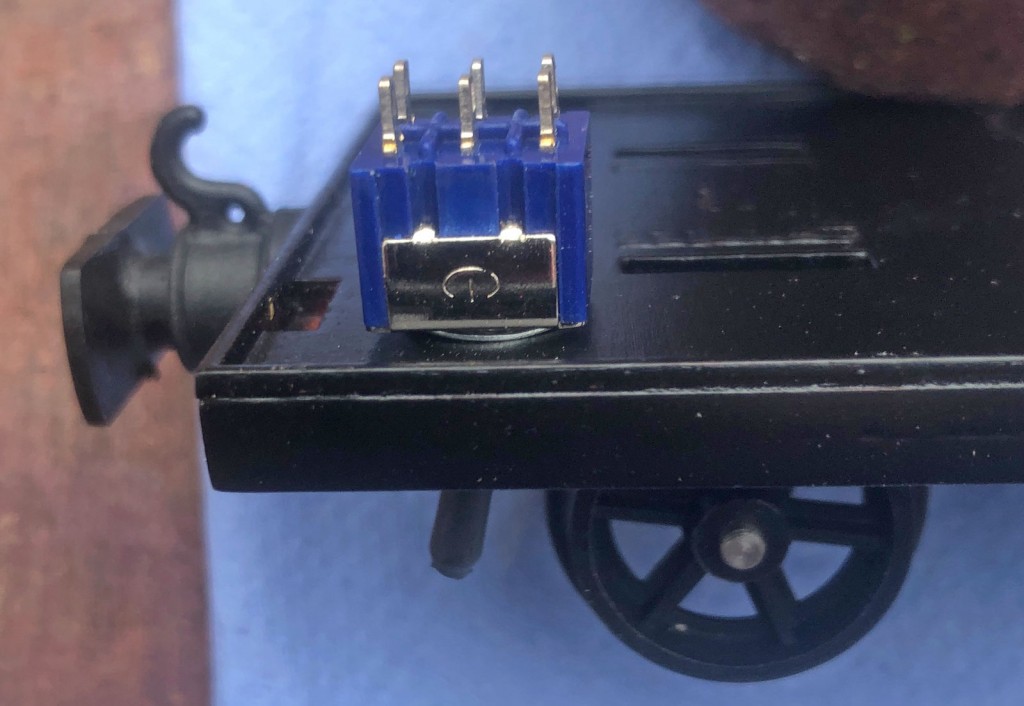 So now to do a bit of soldering.  Battery to switch and switch to LocoRemote.  Fiddly, but easy enough and now you can appreciate why I agreed with Timpdon and left the sides removeable.

This next bit took a bit of thought: how to make the power connection to the loco.  The power wire for the motor that came with the LocoRemote was plenty long enough, so I decided to pop off the connector on one end (gently lift up the retaining tag in the connector with a scalpel or similar whilst gently withdrawing the wire).  Then I drilled two 2mm dia holes close to each other through the wagon floor just behind the buffer fixing.  To ‘stress relieve’ the wire (and make it length adjustable) I added a short length of 3mm bore silicone tube to the wire.  You can then pass each of the wires through their holes and refit the connector.  I then used some stainless wire locking wire to make a loop around the buffer to act as a wire guide to keep the wire away from the track sleepers/ points/ weeds etc.  The photos ought to make this a bit clearer: 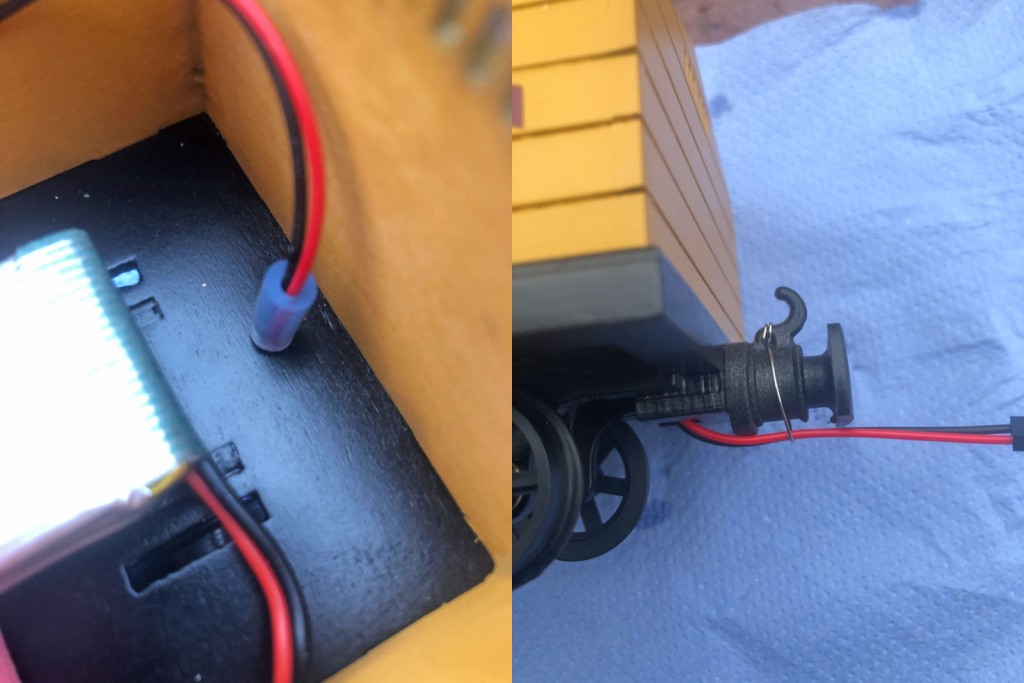 You can now adjust the wire length to suit your loco connection point and then slide the silicone tube towards the wagon floor to prevent it lengthening and catching wildlife between the rails.  I also put slits in the foam to tidy/locate the wiring where needed. 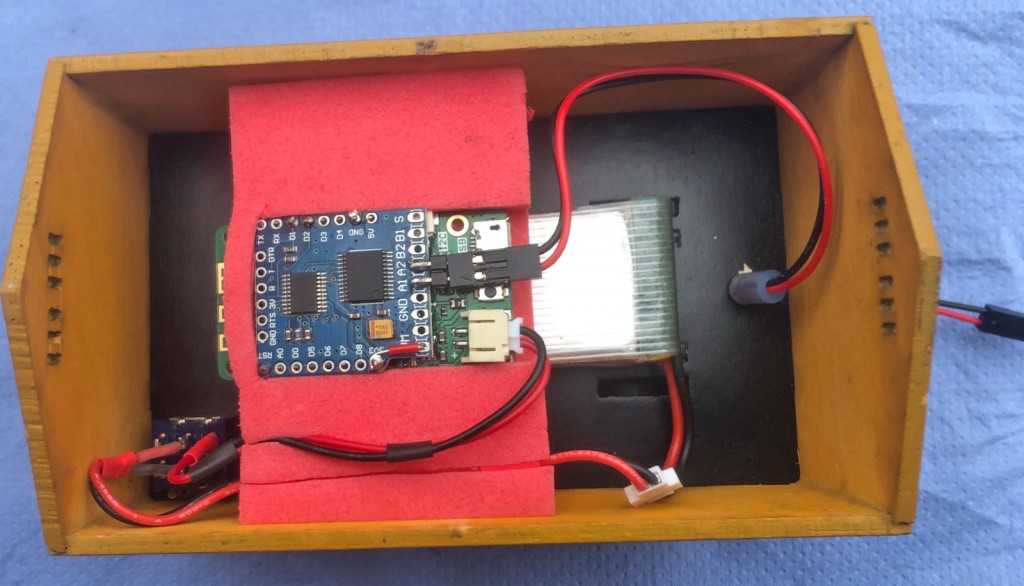 And finally, the loco mod.  This is very simple (or it should be!).  All you need to do is sort out where you want the connector.  Once done, you need to cut two pins off the Dupont connector strip and fix it to the loco.  In my case, the Lister has a rather chunky “re-railing bar”, so I chose to drill a 0.6mm hole through the plastic of the connector strip and into the re-railing bar.  I then fixed using a modelling pin, which then allows the connector to swivel.  I’d suggest soldering the two small lengths of wire before fitting, making sure to insulate the soldered connections.  I used heatshrink sleeving, but insulation tape would do.  Fit to the loco, route the wires to the motor and solder to the motor terminals. 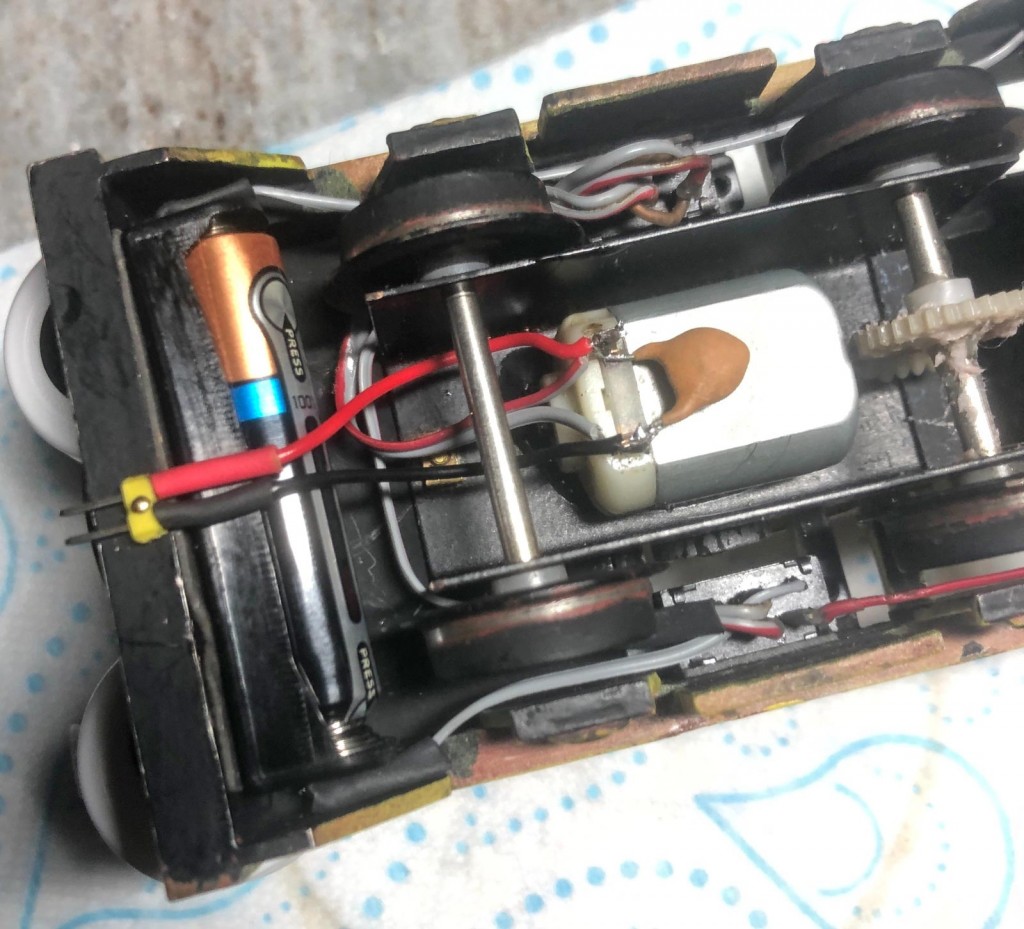 Now you can couple up wagon and loco, follow the instructions for setting up the LocoRemote (when you buy it, you can message Chris and have your name of choice programmed as its identification; see website) and off you go… for much longer than two AAA batteries will last.  You will of course note that the loco is still very much useable ‘as designed’, should you want a ‘dumb’ battery loco with relatively modest operating time. (Warning: do not switch on the loco batteries whilst the power car is connected… something will go very wrong! You have been warned.)  You can fit similar connections to other locos and transfer the wagon to whichever takes your mood.  It’s worth noting that, when searching for the LiPo batteries, you will have a very wide choice of options.  Bigger mAh ratings give longer run times, but are physically bigger.  I ended up buying 5 x 1200mAh LiPo’s incl charger for £20; I envisage further projects involving both the LiPo’s and LocoRemote and, if the granddaughter manages to exhaust the battery (estimated run-time of ~4 hrs so I doubt it), I’ve got spares.  Also useful if you are at an exhibition for the day.

Having done this project, I note that the battery and LocoRemote would easily fit in a two plank wagon, such is the low profile of both components.  For the braver (or more ‘self-challenging’) I guess a round tank wagon would also be possible – a square would be much easier… over to your imagination!

It’s a nice little project which was fun to do.  Now on to the next one: a fully controlled ‘Gandy Dancer’ maybe…?