May 2019 – Building and Detailing a GRS Quarry Hunslet Kit

May 2019 – Building and Detailing a GRS Quarry Hunslet Kit

As use of my garden line progressed I realised a steam outline battery powered locomotive would be a useful addition. My aims were an engine that looked good enough to keep the uninitiated happy, and cheap enough that if damaged when being used by little fingers my wallet did not go into cardiac arrest. A source of instant motive power if visitors arrived and neither time, nor my energy levels, stretched to steaming up a butane powered machine.

A visit to Garden Railway Specialists (GRS) resulted in the purchase of their Quarry Hunslet kit and chassis, to be joined by a LiPo battery and connectors from Component-Shop and an electronic speed controller (ESC) and receiver from Chuffed2Bits. I already had the transmitter, having used this setup when upgrading an old J & D Hunslet Diesel.

Let me be clear from the start. This kit will not give you a detailed model of one of the varieties of Quarry Hunslet, and I am sure the good people at GRS never intended it would. I certainly have not built it as such. There is another supplier if you want to go in that direction. As provided there are a couple of significant faults. I addressed the fact that, as supplied, the rear axle and springs are not aligned, and decided to live with the handrail positions on the cab side and the fact the model is too fat. Were you ever to meet a full size example of what I produced, on a dark night and in thick fog, you might think you had been near a Quarry Hunslet. 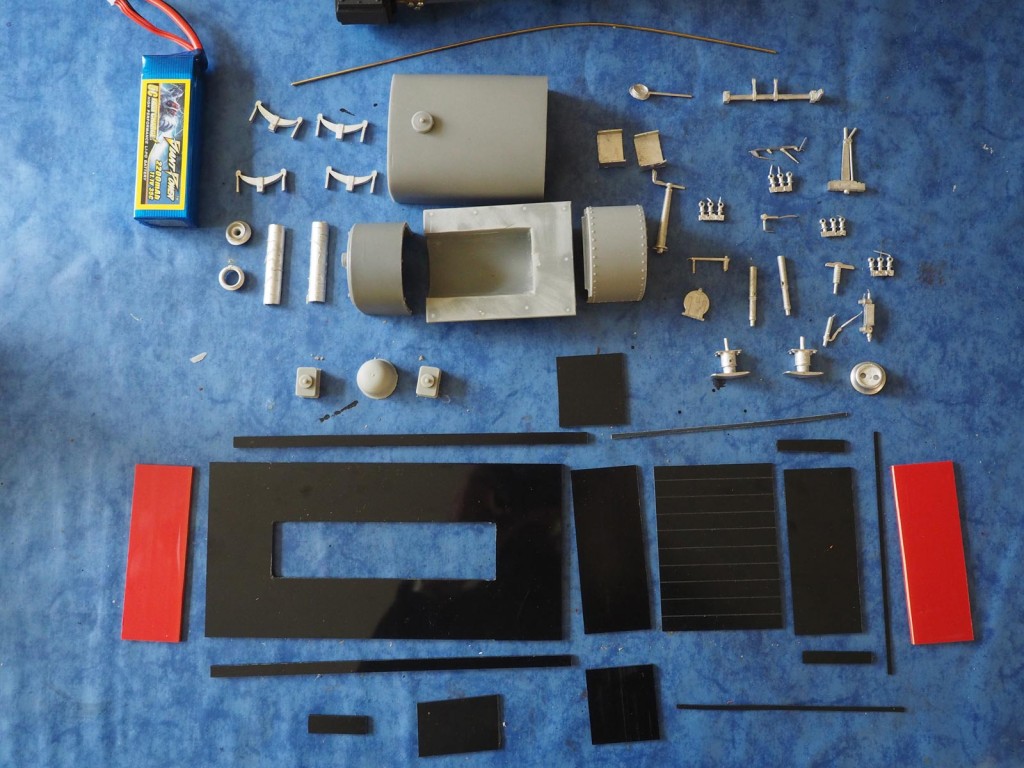 As is obvious from the photo, the kit is basic with some resin parts, pre-cut Plasticard and white metal castings. 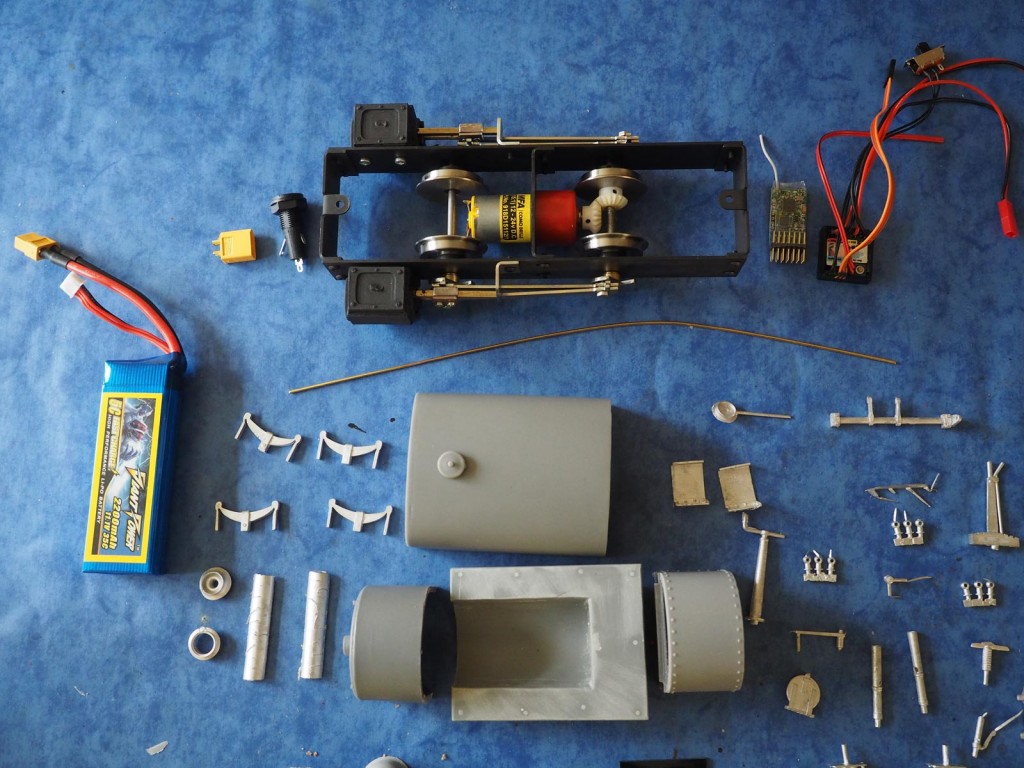 The GRS chassis and electronic components

The chassis comes prebuilt. A metal box was fashioned at the front of the chassis to hold the ESC and receiver – possibly a mistake to use metal for this, as the transmitter/receiver range is less than I expected. At the rear of the chassis an on/off switch and a fuse holder were fitted in the sides and, a brass plate fashioned across the top to take the battery connector. The on/off switch and fuse holder came from the much missed Maplin. 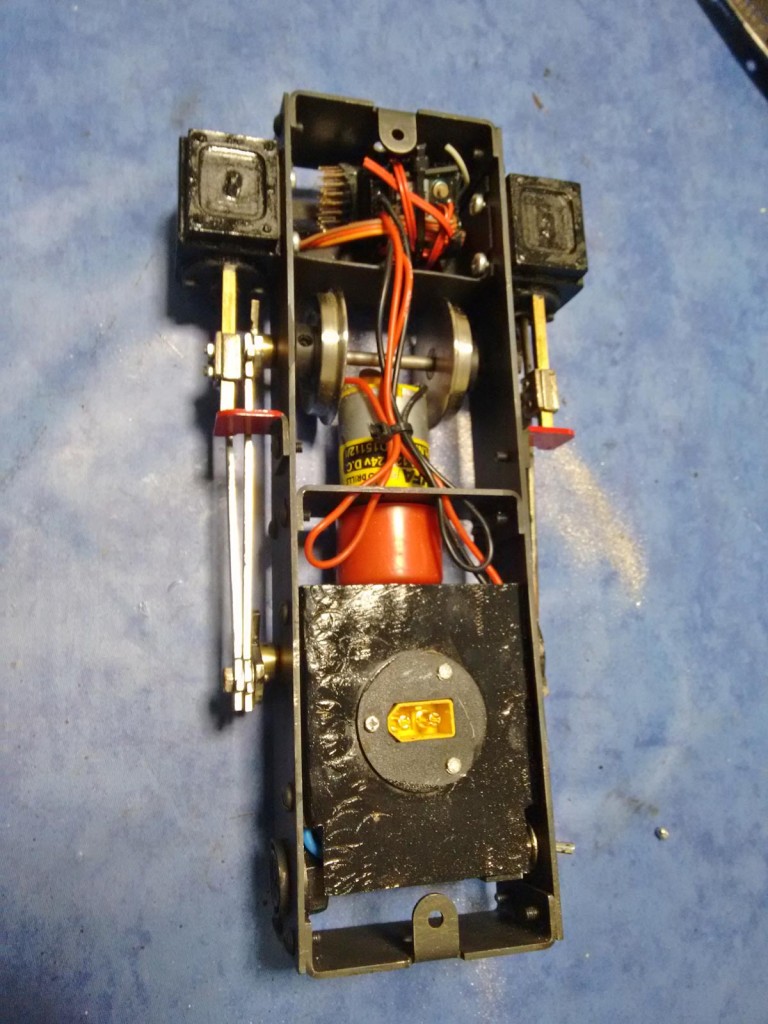 The chassis with power socket and electronics in place

With the electronics in the chassis, the battery sits in the body. I have a healthy respect for LiPos and prefer to balance charge the battery out of the body. The conundrum I had was whether to have either the smokebox or firebox removable to access the battery. I chose the firebox; I’m still not sure if that was the right choice. One negative was the need to have an equally large gap at the rear of the cab to give clearance to remove the battery. 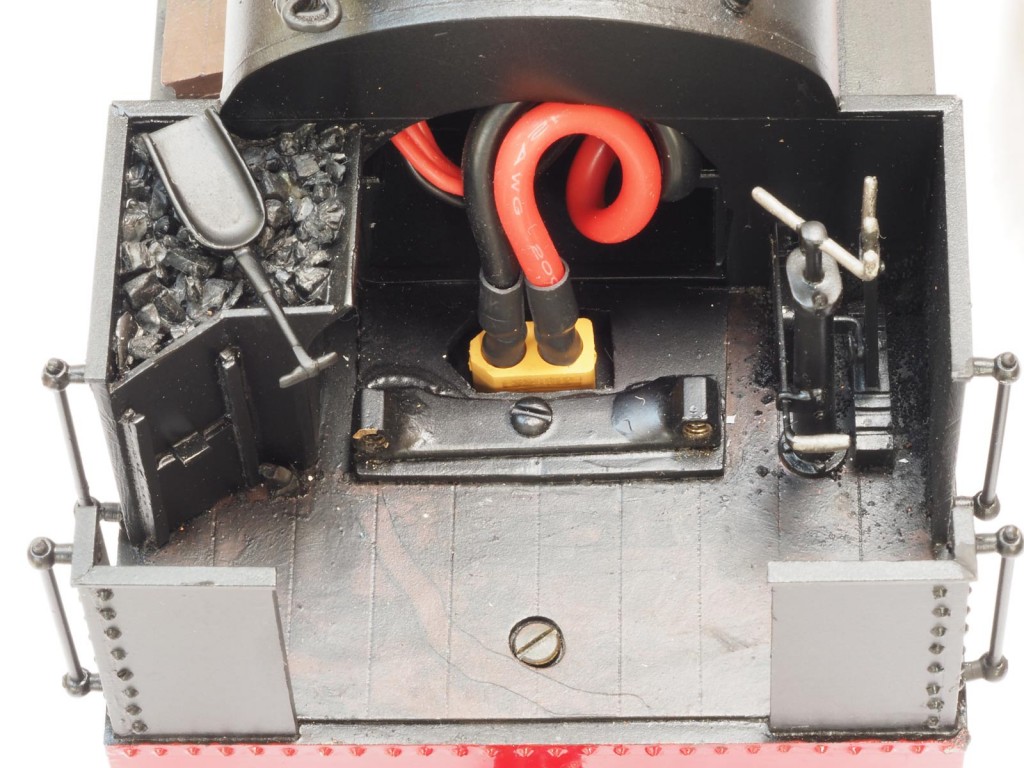 The finished loco showing battery inserted in the boiler

The firebox is fastened by two bolts/nuts originally used to keep a PC hard disk in place. 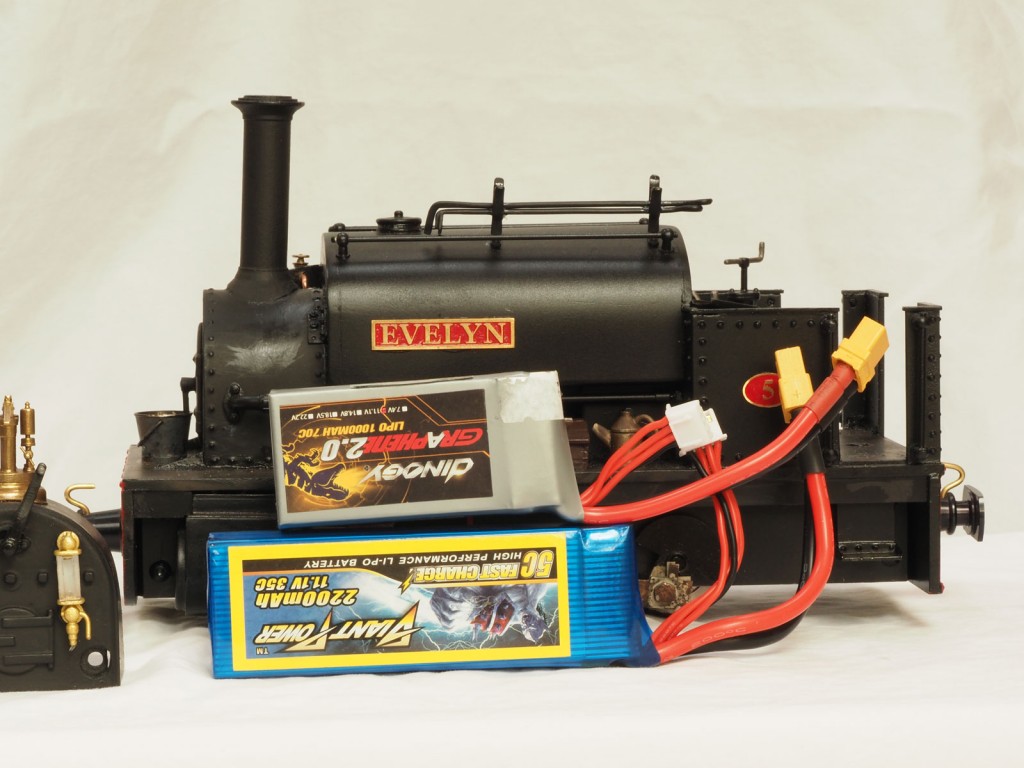 I was uncertain what size battery to use. I did know, as it was printed on the motor, that the motor took 12v to 24V. On the basis ‘size matters’ I purchased the largest battery I could fit in the boiler with a rating close to 12V. This was a three cell 2200mAh LiPo battery and it was a very tight fit in the boiler.

I realised 2200mAh was bigger than I needed after the loco had trundled round the garden non-stop for just over 2 hours and on recharging the battery found I had used around 10%. I now tend to use a 1000mAh three cell LiPo for ease of fitting and it is proving more than big enough. 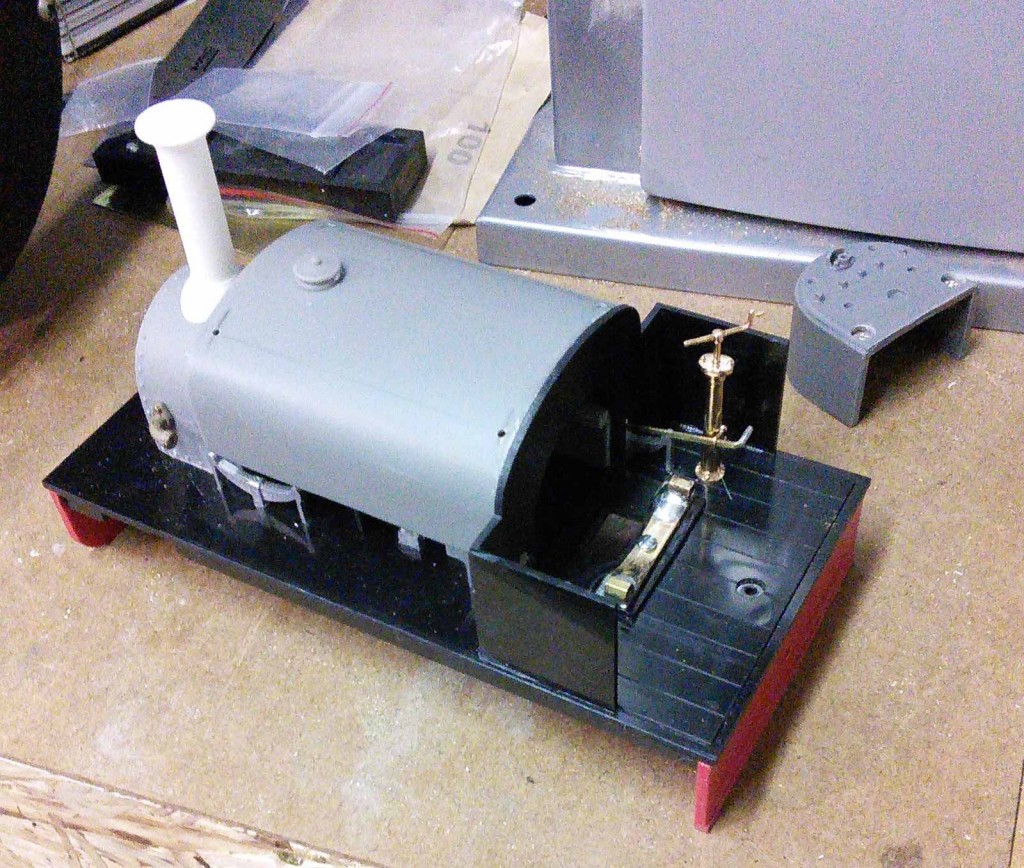 Body under construction with firebox removed

The chimney as supplied is made from 4 parts and being whitemetal I was concerned about its strength. It was at this point a fellow member of Guildford Group pointed me in the direction of the Shapeways website. Shapeways are a company that will 3D print, in a variety of materials, drawings that are submitted to them. More importantly they run an online shop where others can purchase these products. This includes a direct replacement one piece chimney in white nylon. 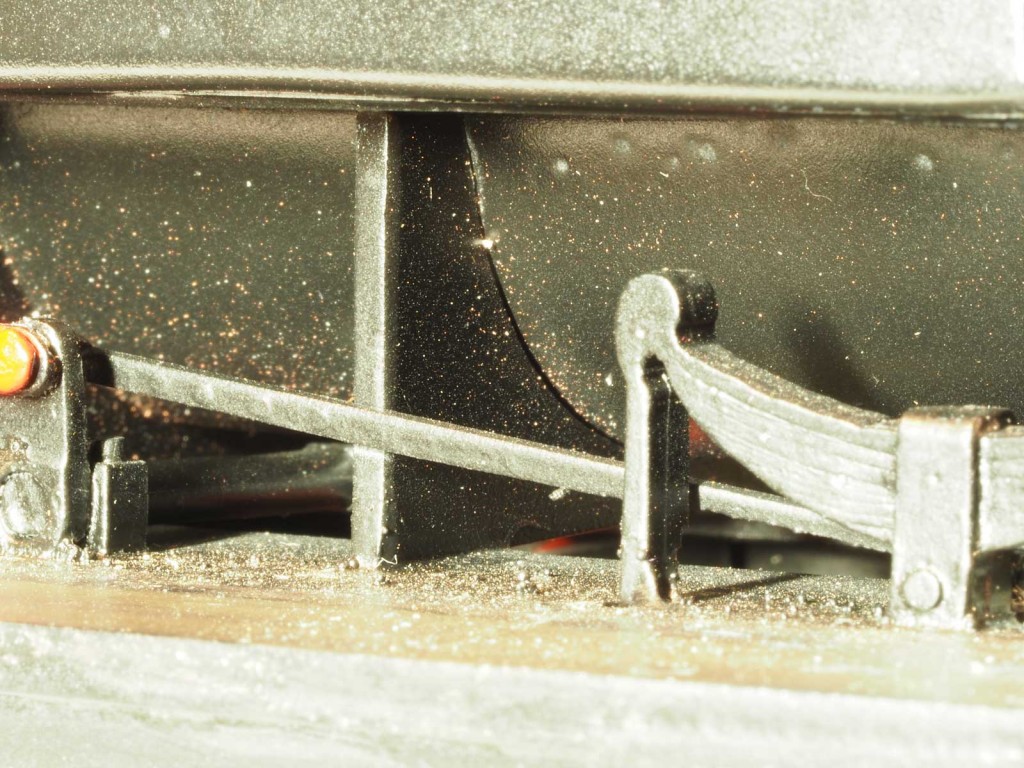 I cut a support from Plasticard for the underneath of the boiler to give additional strength as resin had been removed to allow the battery to fit. 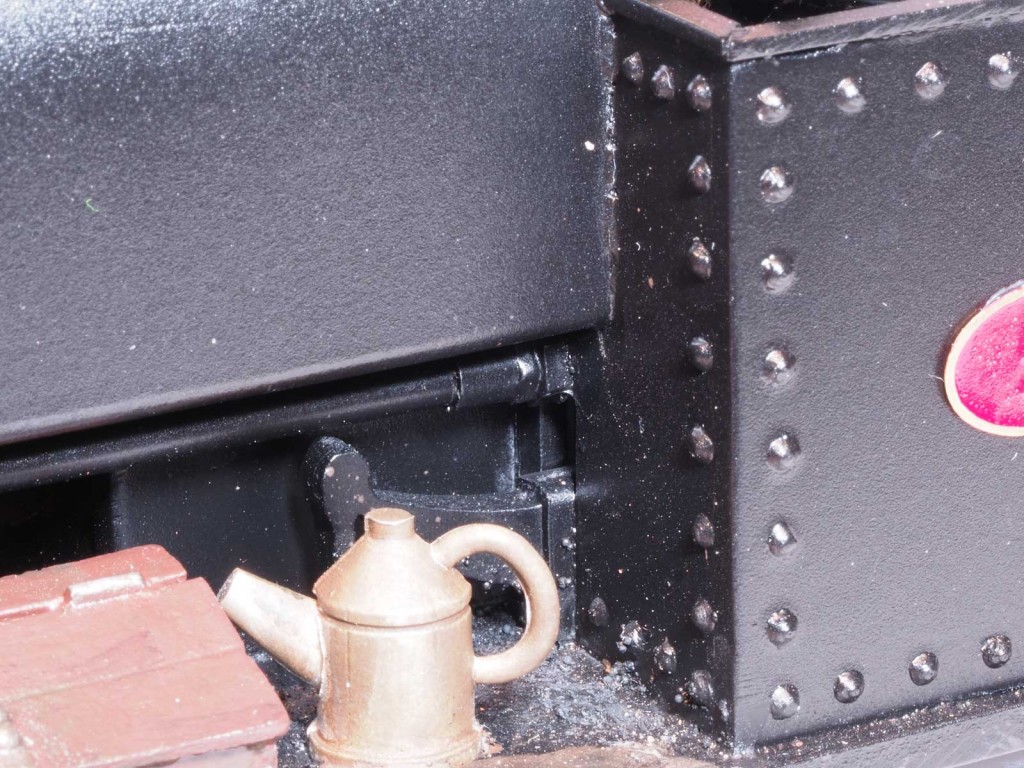 The rear axle/spring alignment was rectified by shortening the footplate by 10mm and moving the whole of the superstructure back by the same amount so the rear axle is just forward of the firebox. The rear springs were moved partly into the cab. 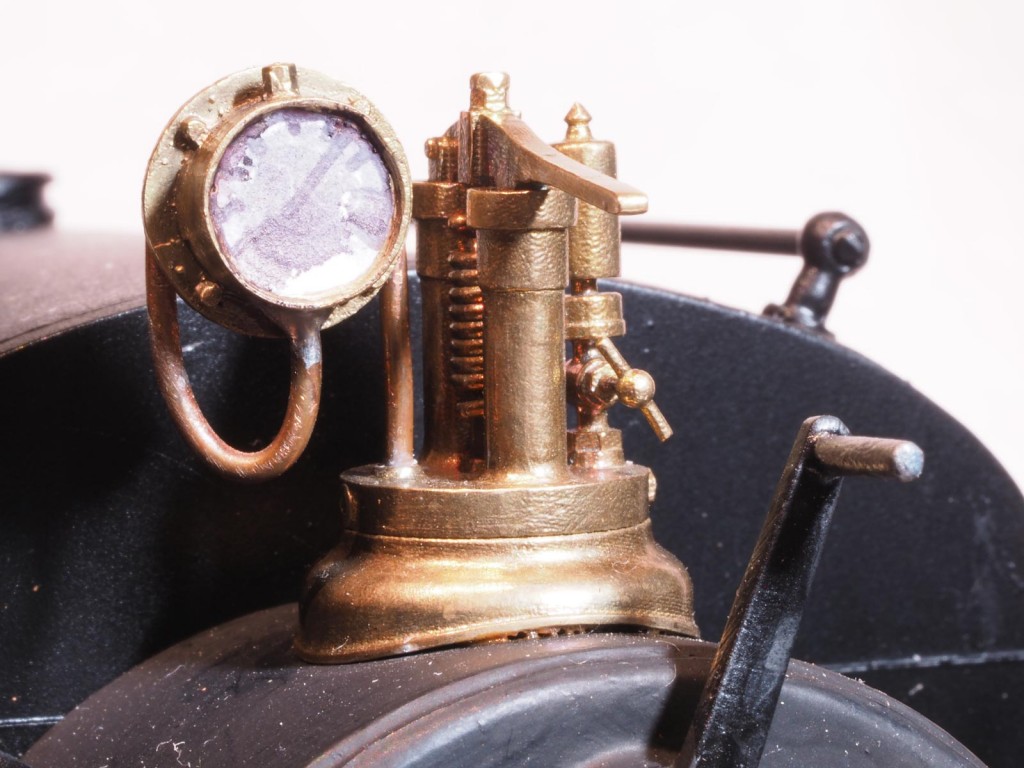 Shapeways also 3D print in raw bronze and brass. I was tempted by the Steam turret, which included the safety valves and whistle, and these replaced the GRS kit parts. A Talisman pressure gauge casting (from Model Earth) was soldered on and attached via mains electric copper cable simulating the pipework. The standard of the 3D printing by Shapeways is as good as it appears in the photograph and no fettling was required. I need to repaint my initial poor attempt at a pressure gauge dial! 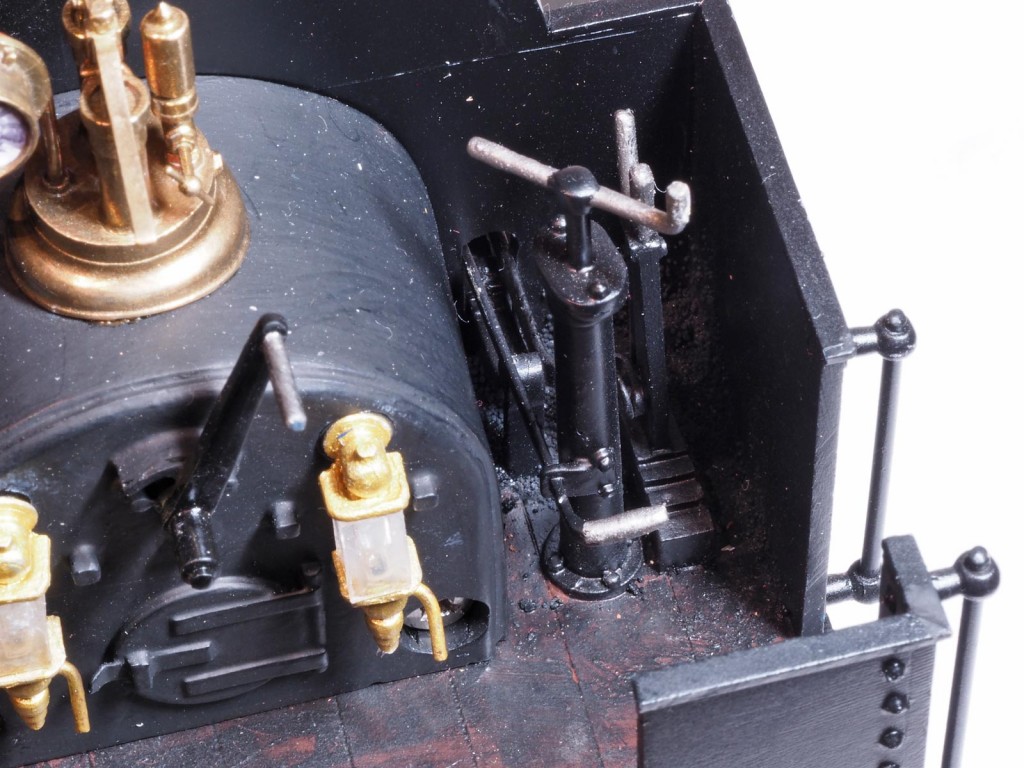 Additional detail was added.  Brass strip was cut for the reversing lever connector and the drain cocks operating lever. In the latter case the end of the strip was bent at right angles and thickened with solder to create a handle. The early Alice Class brake standard from Shapeways included a bracket which I used to hold the drain cock lever – I have no idea if this is correct. The Shapeways item replaced the GRS brake standard which was used in another project. 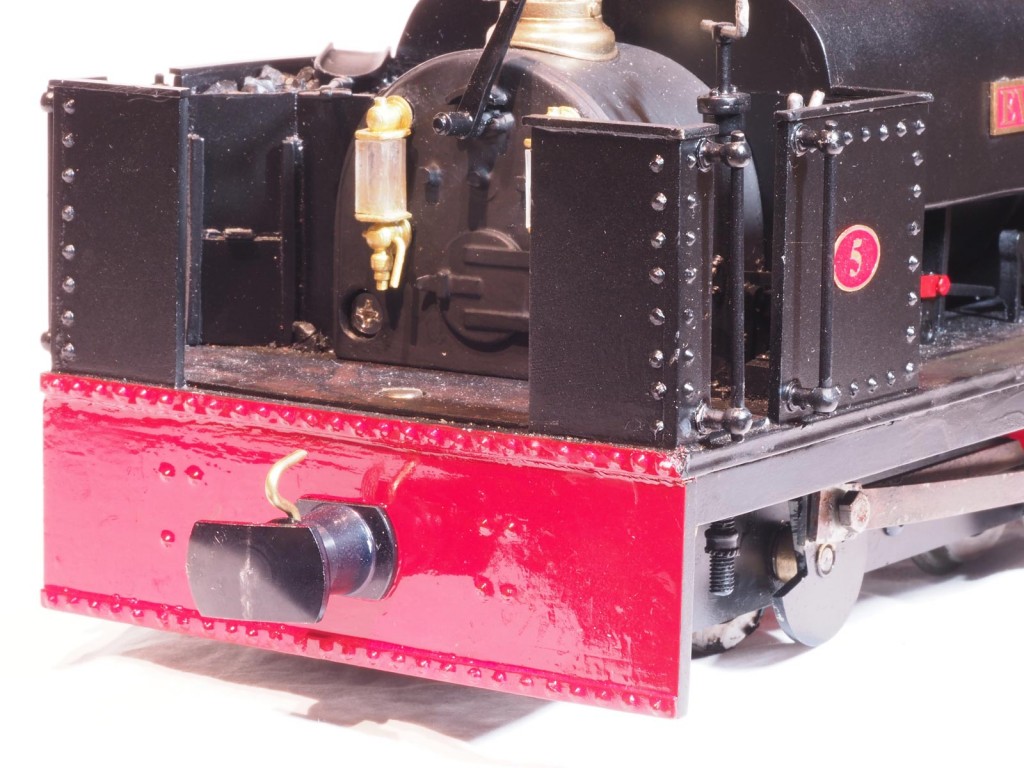 A coal bunker to the left of the cab was created in Plasticard. Rivets were purchased from Cambrian Models and I nearly lost the will to live sticking them on the cab sides and buffer beams. I should perhaps have done the saddle tank, but it was a rivet too far!

As supplied, the kit comes with one whitemetal water gauge – apparently this is as they were first built. The firebox has mounting holes for two and GRS kindly sold me another. I cut the middle out of the gauges and replaced with plastic glazing. 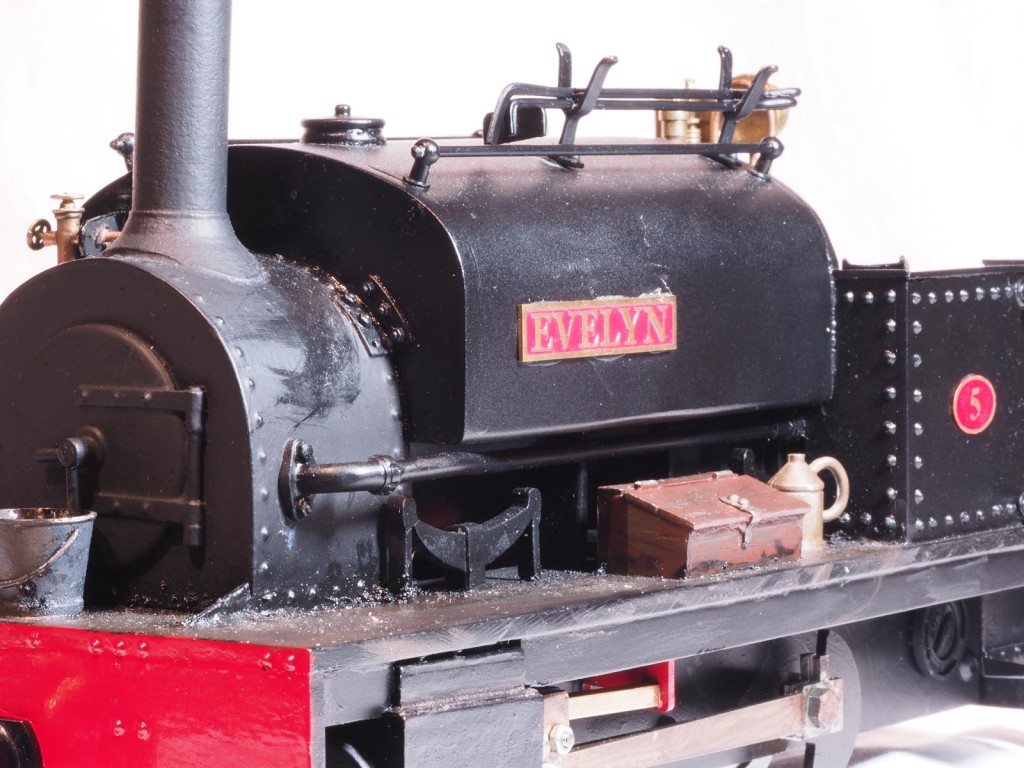 Detailing on the left hand side

The Roscoe lubricator and the fire iron rests are Talisman castings from Model Earth. The brake ejector pipe (oversize if this was a Quarry Hunslet) is from DJB Engineering. Mr Moth the driver needs no introduction and underwent surgery to allow his hand to loop over the brake handle. The large toolbox and oil can on the lefthand side came from Roundhouse, as did the bucket on the front which hides the front body/chassis securing bolt. The fire irons and coal shovel came from Trenarren Models.

I wanted a stronger centre buffer than the examples provided in the kit, and replacements were purchased from Brandbright. The chassis was drilled to take the bolt on the rear of the buffer. The body and chassis are fastened by nuts and bolts into the tabs provided on the chassis. The addition of the fastening of the buffer beams to the chassis via the bolt on the centre buffers takes the pressure off the glued footplate/buffer beam joint.

This approach proved its worth when the locomotive was dropped from a height of about 15” onto concrete. The front buffer took the worst of the impact with a dent to the corner of the buffer beam, and paint scraped off the chimney. 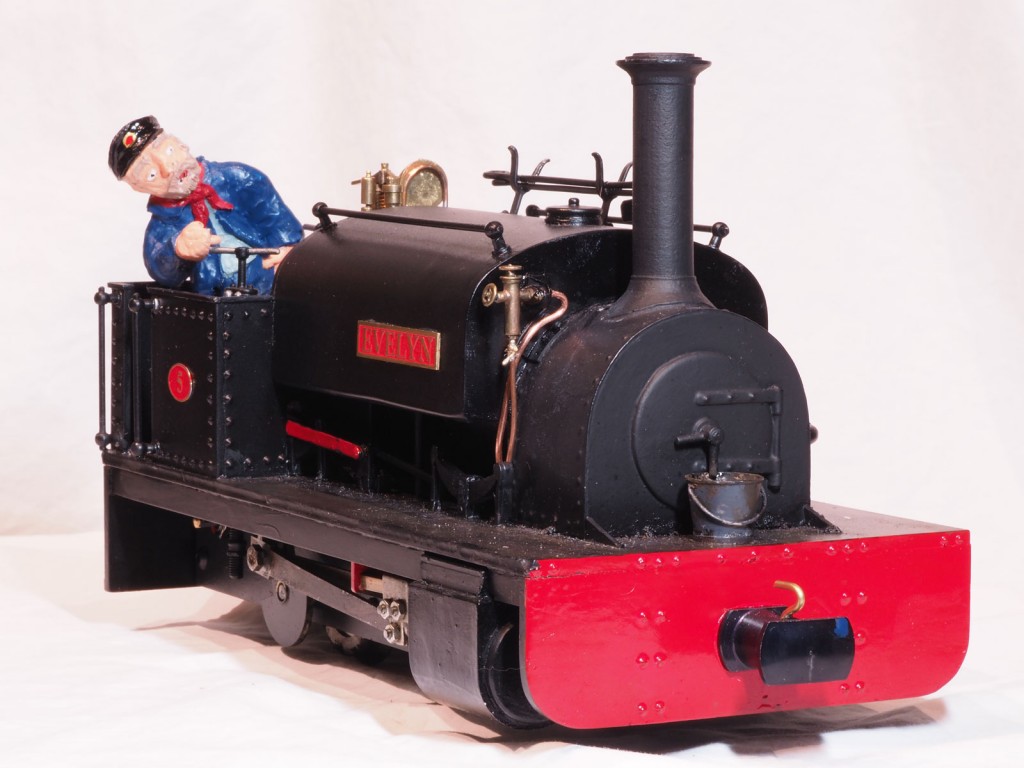 The body was painted using Halfords matt and satin black spray paints. A white pencil was used in places to simulate water stains. The footplate and running boards were given a coat of Humbrol dust wash, then Humbrol weathering powder. The powder was wiped off in areas that might be brushed or subject to foot traffic, leaving the powder in corners and crevices. A further wash was applied in places. The footplate was streaked brown to try and give the effect of the timber boards showing through the dirt. Humbrol rust wash was applied to the connecting rods and underframes.

At some point in the future I would like to add a suitable soundcard.

This was my first experience of 3D printed parts in metal. I wonder, as the technology improves, if suppliers will stop holding stock, but print on demand. It should make it practical for the range of detailing parts to be even greater.

The Shapeways ‘sub-shop’, Coast Line Models, supplier of the steam turret and other metal parts no longer lists them in their ‘shop’. From the photographs on the website the owner appears to have produced a stunning model of ‘Red Damsel’. Maybe the parts will reappear or, at the very least, if somebody wants one it might be worth an enquiry to see if they can be made available. The nylon chimney comes from a different ‘sub-shop’ and at time of typing was still available.