The Glyn Valley Tramway (GVT) was originally a horse drawn, gravity tramway carrying quarried materials to a canal. When it converted to steam around 1890, the tram style locos had shrouded wheels and valve gear, also long side tank surrounds. After reading Bernard Rockett’s excellent books about them, I tried to design a 5 inch gauge, battery electric loco based upon their steam outline, thinking that the box-like form would be ideal to conceal the batteries, etc. Very quickly I discovered just how big and unwieldy a 5 inch gauge scale model would be and abandoned the idea.

Years later, after downsizing to 16mm scale, I saw an advert for an Accucraft GVT loco in 16mm scale and was “hooked” – I had to have one! Running the GVT with live steam was fine. However, as the body just lifted off the steam unit, it cried out for an alternative lifestyle – with an electric chassis for those occasions when a steam-up wasn’t an option. Hoping for a quick (lazy?) build, I incorporated an Essel chassis and Fosworks electronics, plus some simple metalwork to make an attractive, versatile steam/electric combo.

In plan view, the Accucraft steam chassis is a rectangle with rounded corners. At the smokebox end, the body rests on the steam unit chassis, but there isn’t a similar rest at the cab end because the body is supported on top of the boiler. Some added body support was needed at the rear. The removable body is kept in place on the steam chassis by pins that are retracted by pulling the sprung buffer heads outwards, so the electric chassis required a similar facility. 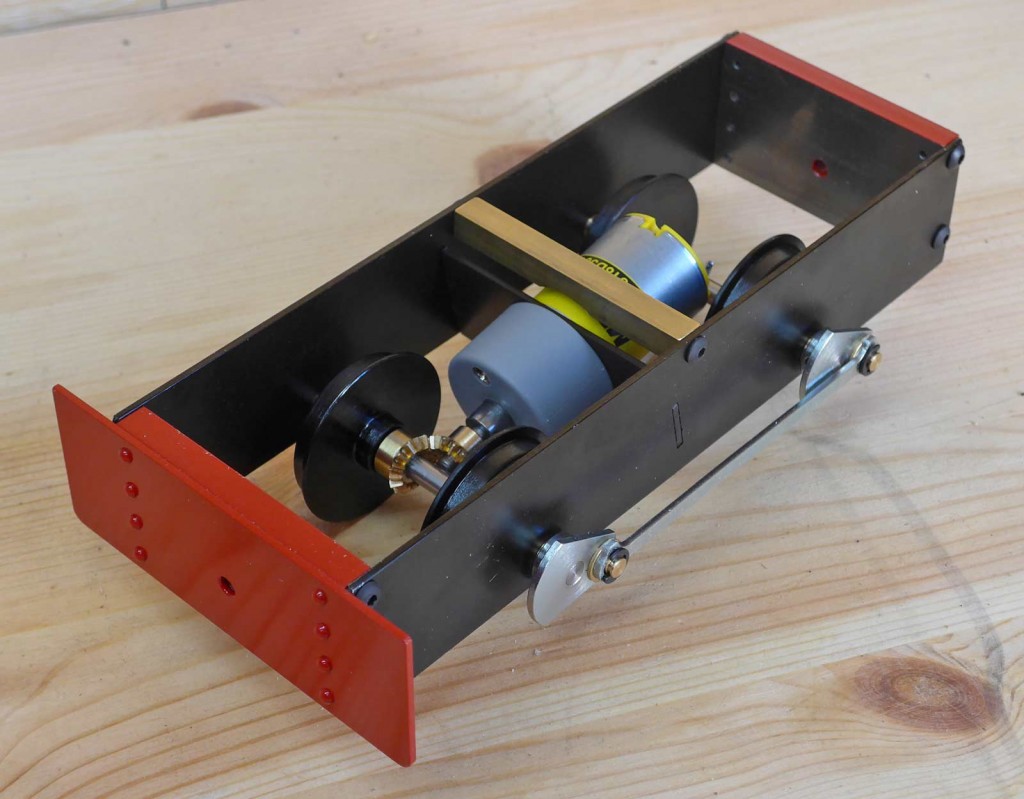 The chassis from Essel Enginering

The Essel chassis I used was a beautifully made type 005, 175mm long. An eBay search located a piece of 3mm thick aluminium, 100mm wide (the exact width of the chassis, saving a lot of sawing) by 300mm long to make the Essel chassis top platform. Also, 3mm thick aluminium angle, 50mm x 50mm x 300mm long, provided enough material for the front and rear extensions and also a deck onto which the Run/Charge switch and charging socket were mounted in the cab. A few more bits of aluminium and Plasticard from the scrapbox, and countersunk head M3 screws, completed the inventory of materials. The tools needed were simple, too: 2.5mm and 3.5mm drills, countersink drill, M3 taps and wrench, hacksaw, files, screwdriver and the usual marking out stuff.

A few simple measurements were needed before starting work. With the steam chassis standing on a flat surface, I measured from the surface to the top of the locating pin hole on the front of the steam chassis. That determines the height of the underside of the front and rear electric chassis extensions, where the body locating pins will fit.

As previously mentioned, the new electric chassis doesn’t give any support for the cab end of the body, so the solution I adopted was to fit a supporting pin on each side, just in front of the cab, so that the cab end of the body is supported by the tank tops. My pins turned out at around 38mm, but with hindsight, a couple of bits of threaded rod (say M6) and nuts would have provided simple, adjustable supports. As long as the body sits level it doesn’t really matter how its achieved.

Measuring the total length of the steam chassis determines the length of the front and rear extensions – both are the same length. Mine needed a sliver taking off the angle at each end – a lot of sawing, but quite quick in aluminium.

Making a start – cutting and fitting

My Essel chassis arrived ready built with beautifully painted buffer beam overlays, expertly riveted in place. Sadly, those had to be removed, which made a bit of a mess of the paintwork. Perhaps I should have asked Stephen Lacey if he could supply the chassis without the overlays.

The first job was to make and fit the platform surface on the Essel chassis. A length of the 100mm wide flat aluminium was cut and finished to the exact length of the Essel chassis. Holes were marked out for drilling (2.5mm) through the aluminium into the chassis end beams. The end beam holes were tapped M3, and holes in the top opened out to 3.5mm and countersunk for M3 screws.

Next, the horizontal position of the extensions on the chassis frame beams was marked. The upper surface of the extensions will be at the previously measured distance to the top of the buffer pin holes on the steam chassis, plus the thickness of the angle material. 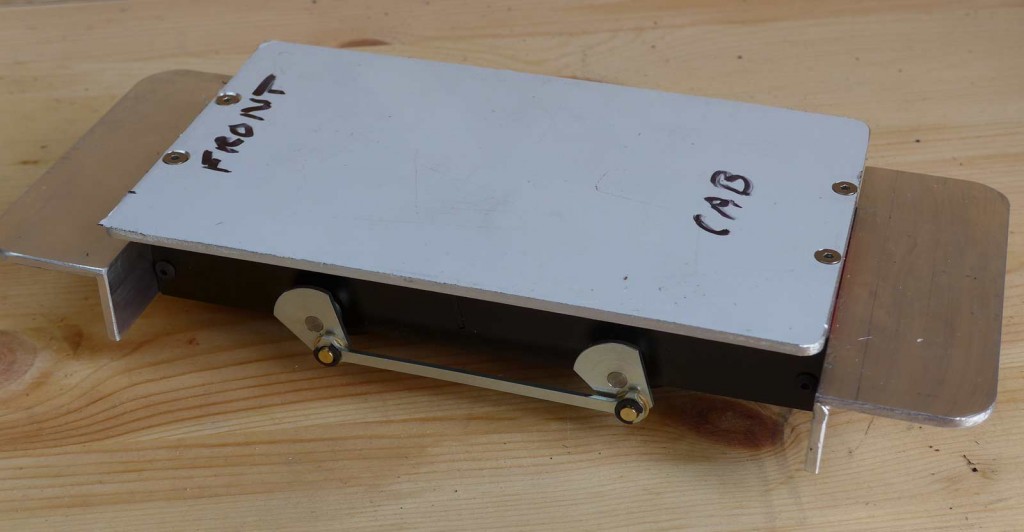 Two 100mm lengths of angle were cut for front and rear extensions. To avoid getting swarf into the chassis mechanism, I opted to remove one beam at a time and with the angle clamped to the chassis beam at the marked level, a couple of 2.5mm holes were drilled, the holes in the beam tapped M3 and the holes in the angle opened up to 3.5mm. and countersunk. The chassis buffer beam was replaced and the task repeated for the other end. With both extensions bolted in place, the chassis was placed on the inverted body so that the rounded corners could be marked and cutting lines drawn on the surplus angle that protruded below the chassis beams. The hacksaw, files and a bit of effort removed the scrap and tidied up the main part of the electric chassis so it fitted snugly inside the body. 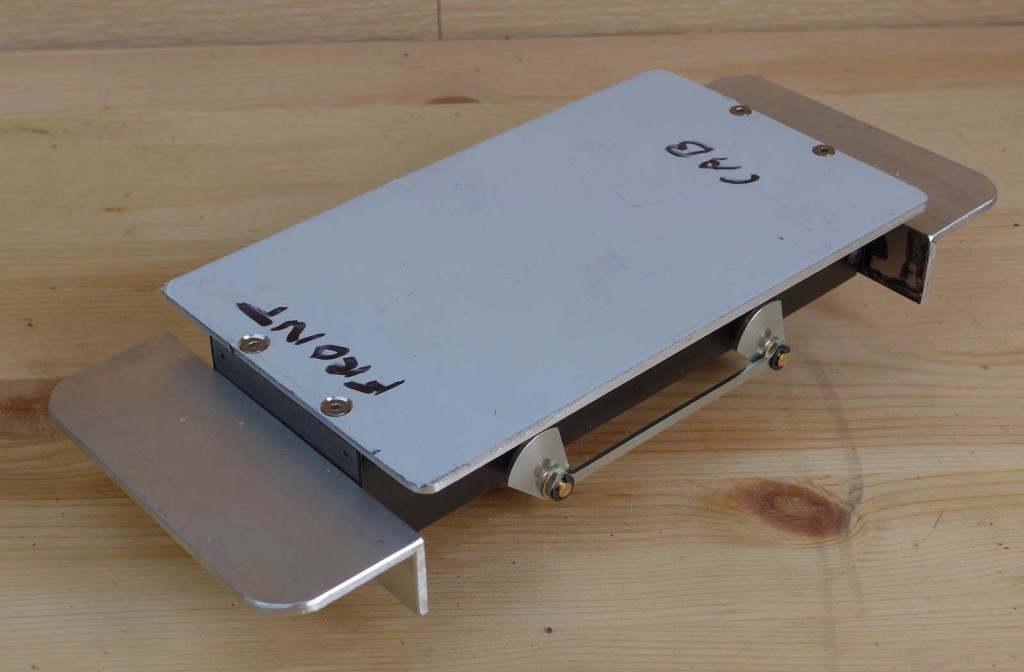 The main part of the electric chassis.

The deck for the charge/run switch in the cab used up the last length of angle, together with a similar length of a smaller angle from the scrapbox. 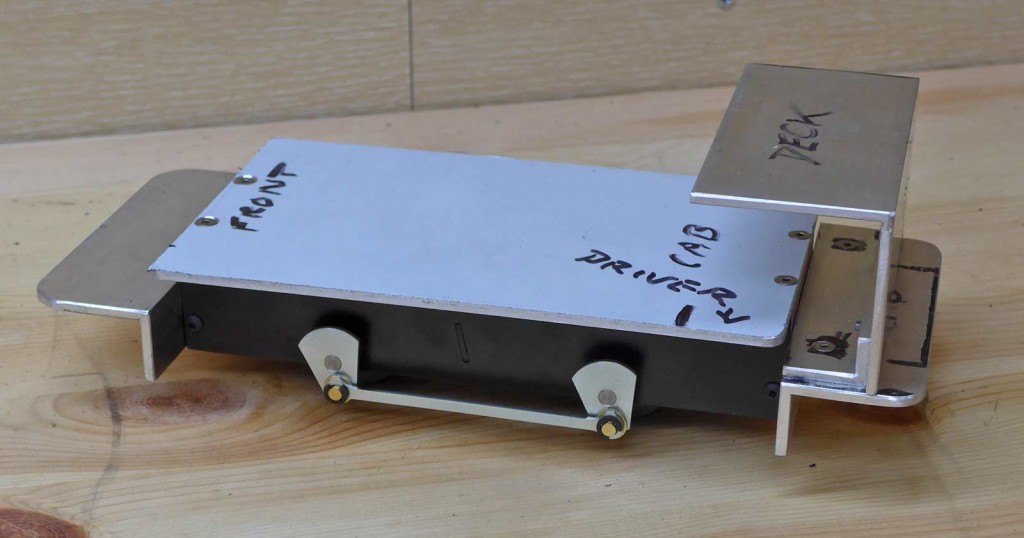 Deck for the charge/run switch added.

My GVT body has a loco driver glued to the cab side, so a rectangular hole was cut in the deck to allow his body to protrude. Also, our club has a very elongated track and I worried slightly that the RC receiver might have inadequate range with the antenna buried within the body. My precautionary measure was to cut a hole in the deck for the antenna to protrude into the open area of the cab, protected by a Plasticard box. 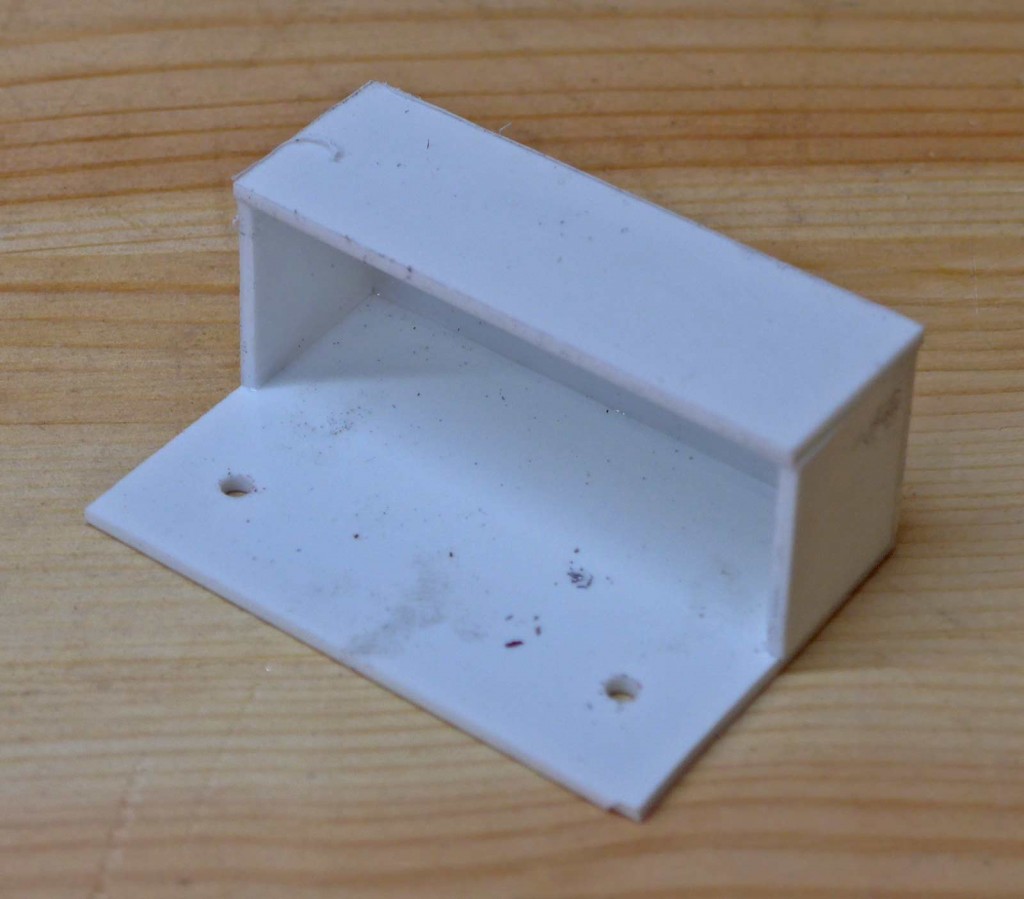 The Plasticard box to protect the aerial.

The final mechanical job was the supports for the cab end. Placing the assembled chassis on the inverted body allowed the location of the cab front to be seen and suitable hole centres marked for the rear body supports beneath the tank tops. As suggested, I would now fit lengths of screwed rod through the holes, adjusting the length until the body sat level on the chassis before trimming the rods to their final length. 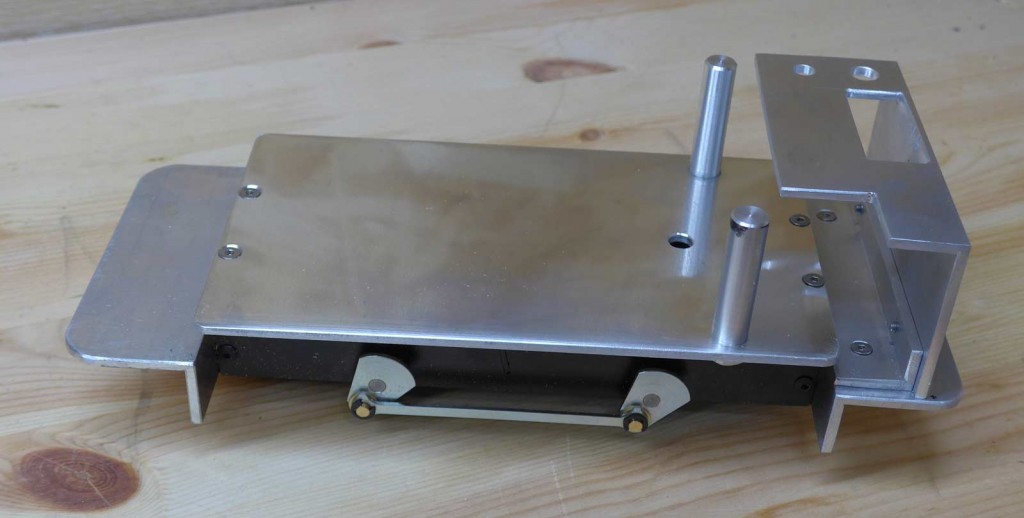 The electronic gear came from Steve Foster at Fosworks. All electronics is a black art to me – my original background (well over 60 years ago!) was with Megawatts, not Milliwatts – so the friendly advice given by Steve was very much appreciated. He supplied all the gear, transmitter, receiver, electronic speed control, sound card, speaker, switch and charging socket all connected up and tested – ready to go! The only slight downside to prewiring is that the wires are inevitably left somewhat longer than essential to accommodate a range of applications, meaning that squashing the excess into a restricted cavity makes the installation look untidy. I use self adhesive Velcro to stick components down, even though it is quite thick stuff that doesn’t enhance the appearance of the installation, but it is quick, effective and easy to change if necessary. 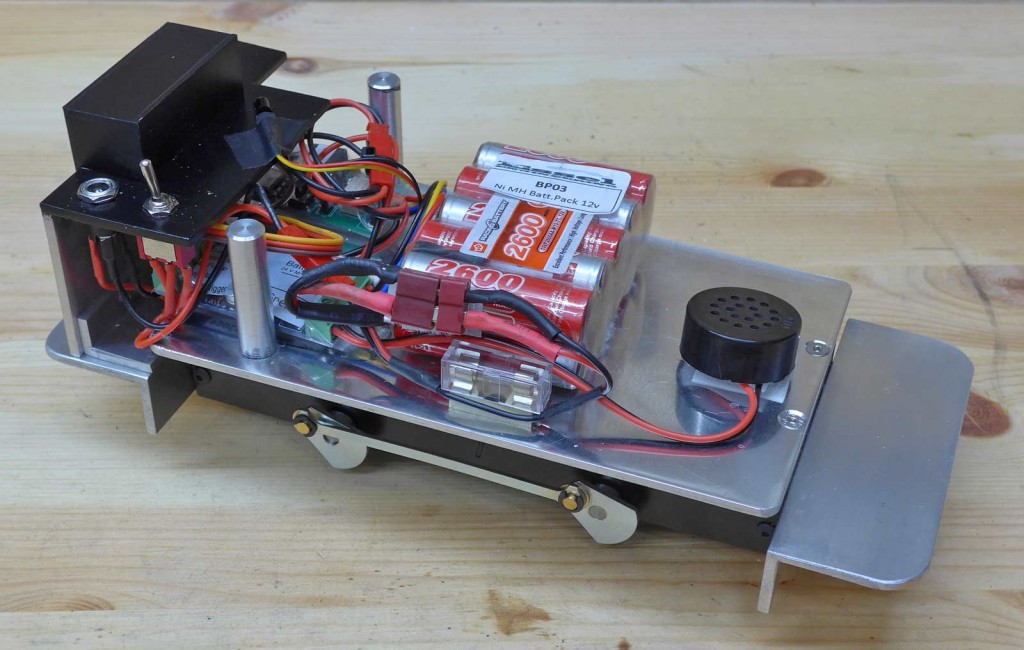 All the electronics in place.

The completed model travels in a stately manner around the track, pulling a significant load, at a nice prototypical speed, even though the modern-day junior audience would prefer it to run at a scale 200mph. The sound card provides a realistic chuff, safety valve steam escaping and a guards whistle, together with a reasonably prototypical bell as demanded by the Board of Trade on tram locos in the 1890s. All in all, construction hasn’t taken any significant time, skill or equipment. The cost would be reduced by designing a wholly self built chassis/motor/wheels unit or by omitting the sound card. However, it suited my purpose and was a nice, quick, simple build, to the extent that I was instructed to make a second unit for my wife, who also likes to play trains! 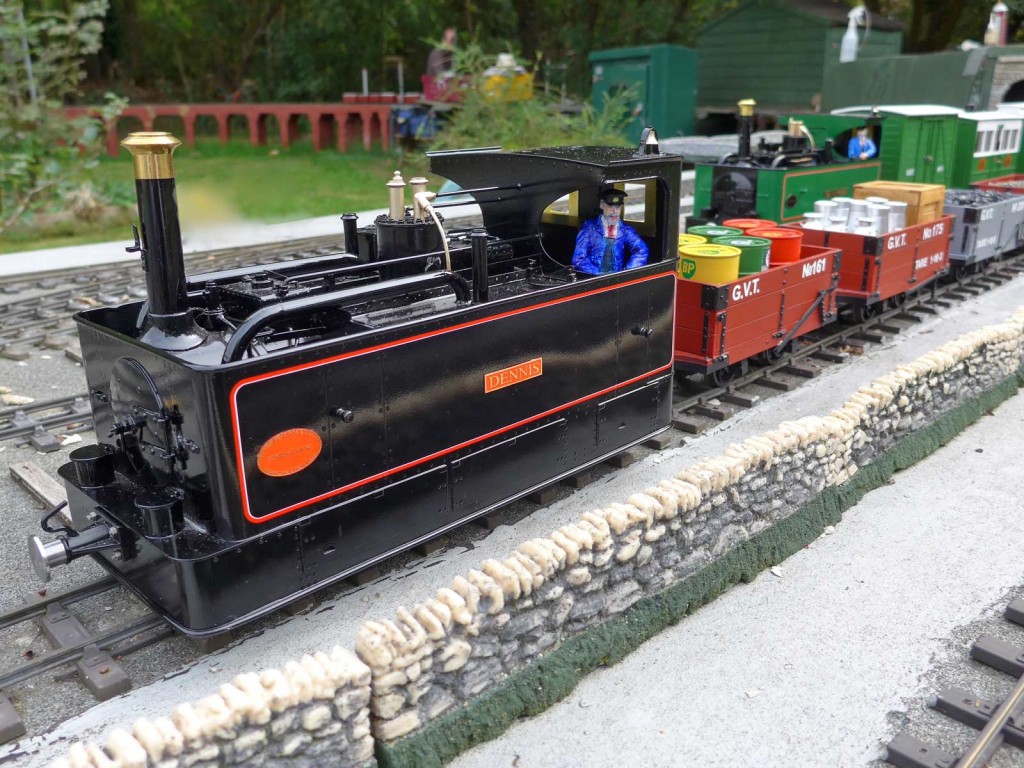