The basis for the model is a comparatively massive 6-wheel standard gauge wagon in the Netherlands Railway Museum at Utrecht. Some English railways would have called the design a ‘road van’ as it provides parcels and guards accommodation, along with a ‘dog box’.

The story goes that the passenger department on the Kirschtalbahn were becoming irritated at the continued use of one of their best luggage vans on the pick-up goods train, so the management hunted around for a suitable second- or even third-hand van to do the job… hence the arrival of the Dutch bogie van we have called “zakkendrager” (bag carrier if we have it right). 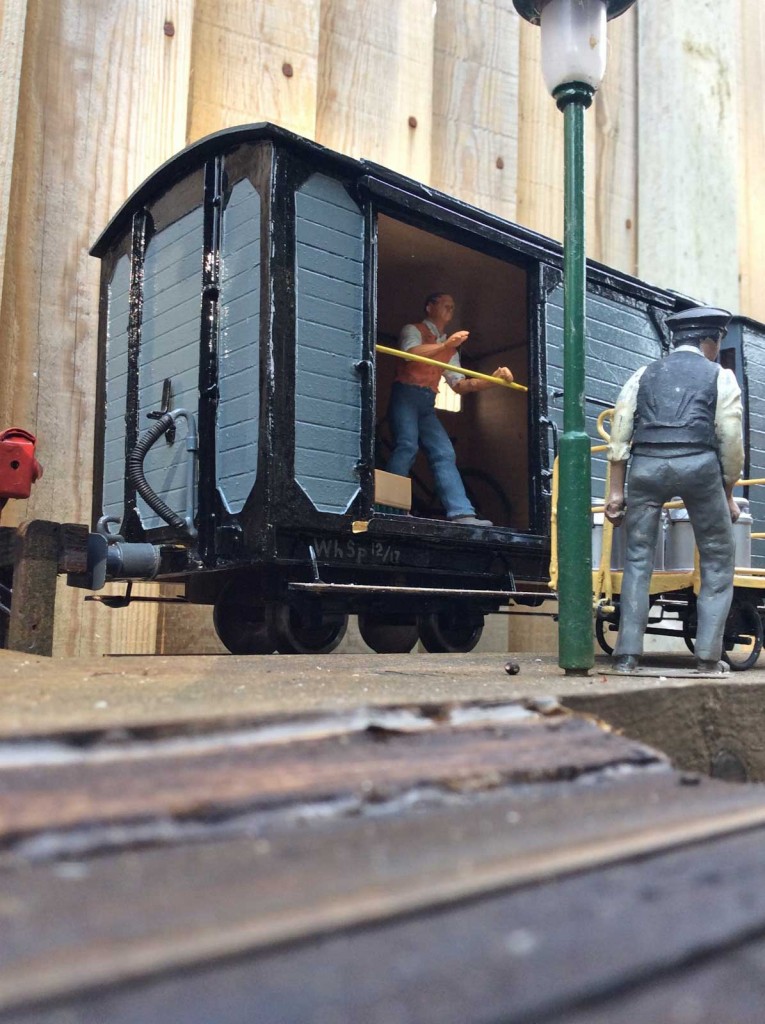 The idea was to make a similar van to the standard gauge one I had seen in Utrecht, not to scale and suitable for running on my line. To this end the dimensions, running gear and couplings are similar to stock I already use. 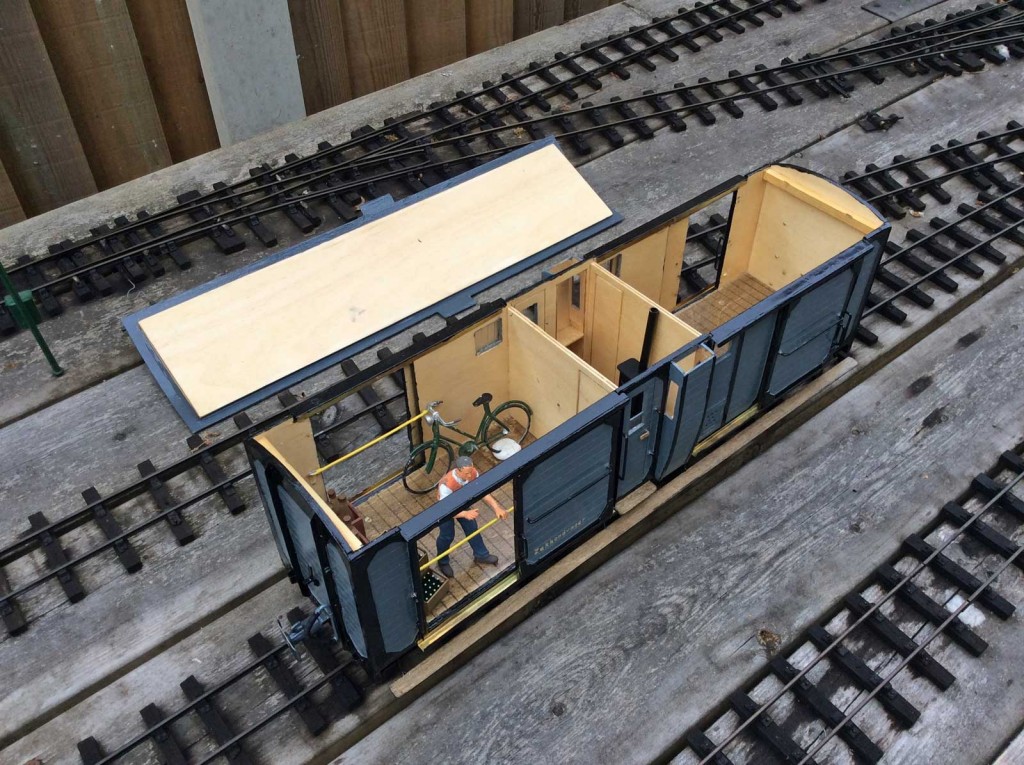 The van body is made in what you might call the traditional (old-fashioned?) way using 6mm plywood as a floor and 3mm for the walls. The components making up the floor, sides, bulkheads and ends are sealed with a coat of varnish, smoothed down with fine sandpaper, and scored to represent planking. Shallow rebates to the top edges for the sliding door channel (see below) need to be made at this point. The two internal bulkheads, with allowance for floor thickness and 3mm at the top for the roof to fit inside, are glued to the floor, upright and square… as usual, easier said than done! The guard’s door windows and openings for duckets are cut out, and the look outs shaped and fixed, before gluing all the vertical external components to the outside edge of the floor using water resistant PVA. Each end needs a ledge to be fitted inside to support the roof. 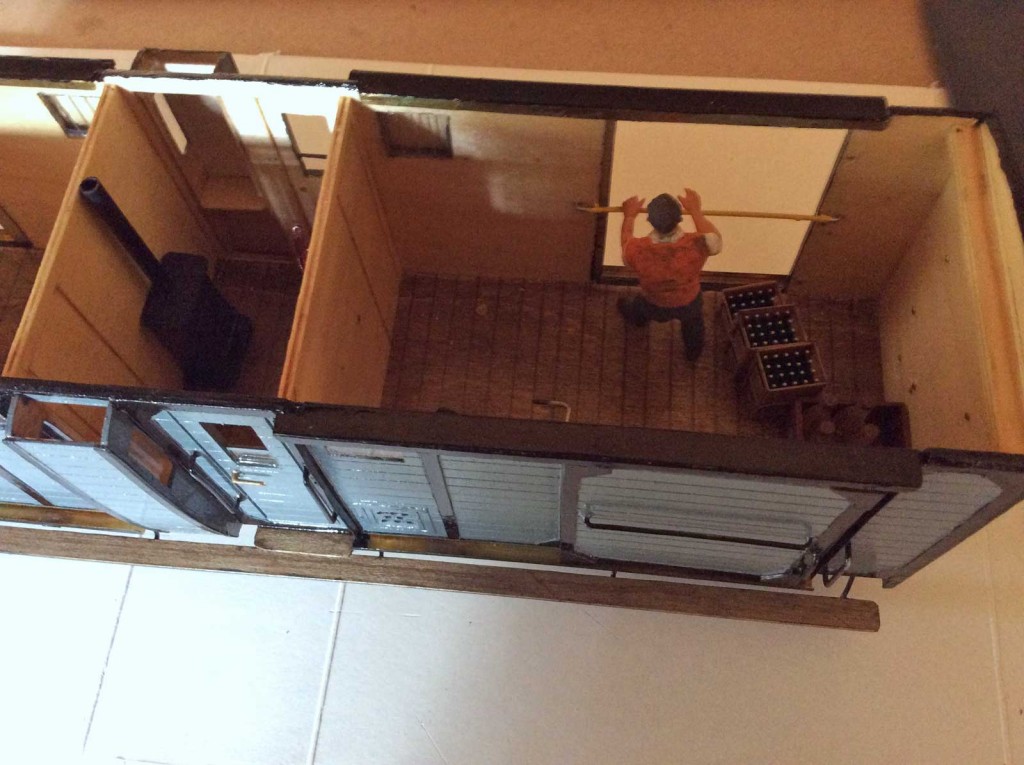 The four large sliding door openings represent weak points in the structure which are closed at the top by a brass double channel section. For this, each doorway has a channel for the top of the sliding door with an L section soldered to it, doubling the channel.  This fits over, and is glued to the top of, the side panels with epoxy. The floor must be kept flat while the glue sets. A narrow piece of 3mm ply is glued as a filler in the vacant wall channel. The whole will become a firm, rigid box. 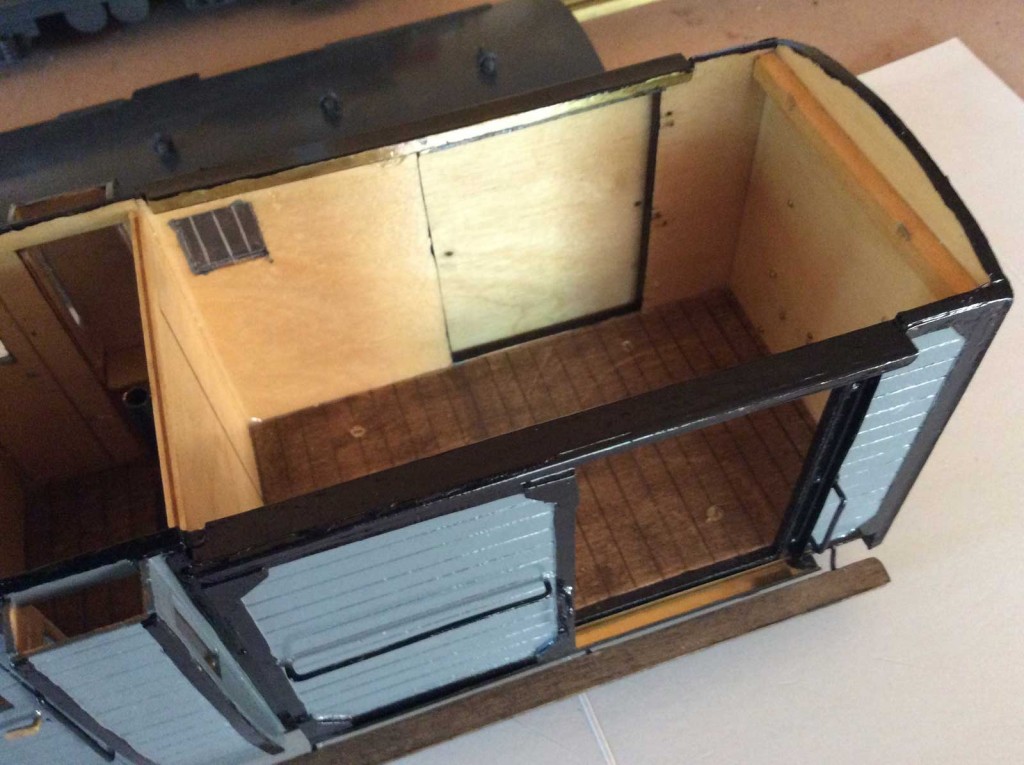 The roof is made up on a 3mm ply board fitting inside the sidewalls, supported by the bulkheads and ledges on the end walls. About a dozen arc-shaped roof ribs are glued to the upper surface, better more than less. Between the ribs, and along the top edge of the board, some additional scrap ply is fitted to increase the surface area for the roof glue to stick to, thus avoiding a wavy edge. A sheet of 1.5mm ply for the roof, shaped to go over the guard’s duckets, needs to be glued to this structure with PVA. I did this with the roof in place on the van, after first covering the top edges of the body with clear cellulose tape to stop it adhering to the sides. Bound tightly all the way along with plenty of string for 24 hours while the glue sets, the roof assembly can be eased off and should fit well when the tape is removed. 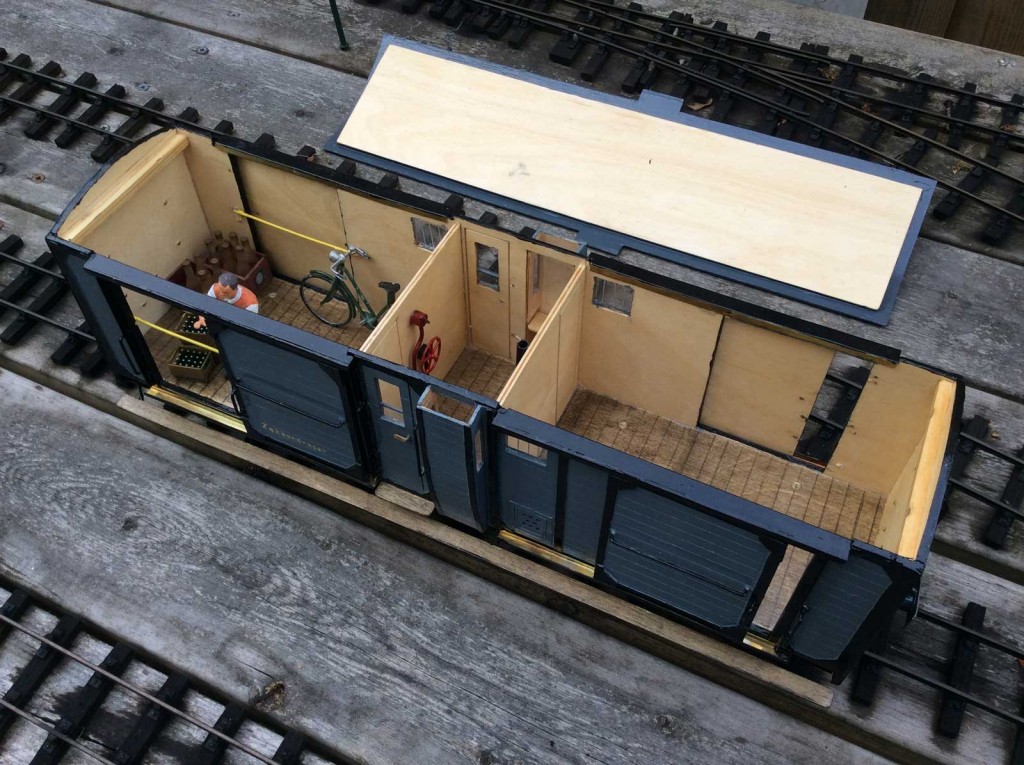 The lower door runners require more U channel and are removable to allow fitting of the doors.  Each channel is soldered to a 6mm brass strip about 25mm from each end, extending under the floor around 30mm. This is drilled at the far end and bolted through the floor using countersunk screws and nuts, since the channel has to come off from time to time to fit, and later paint, the doors. 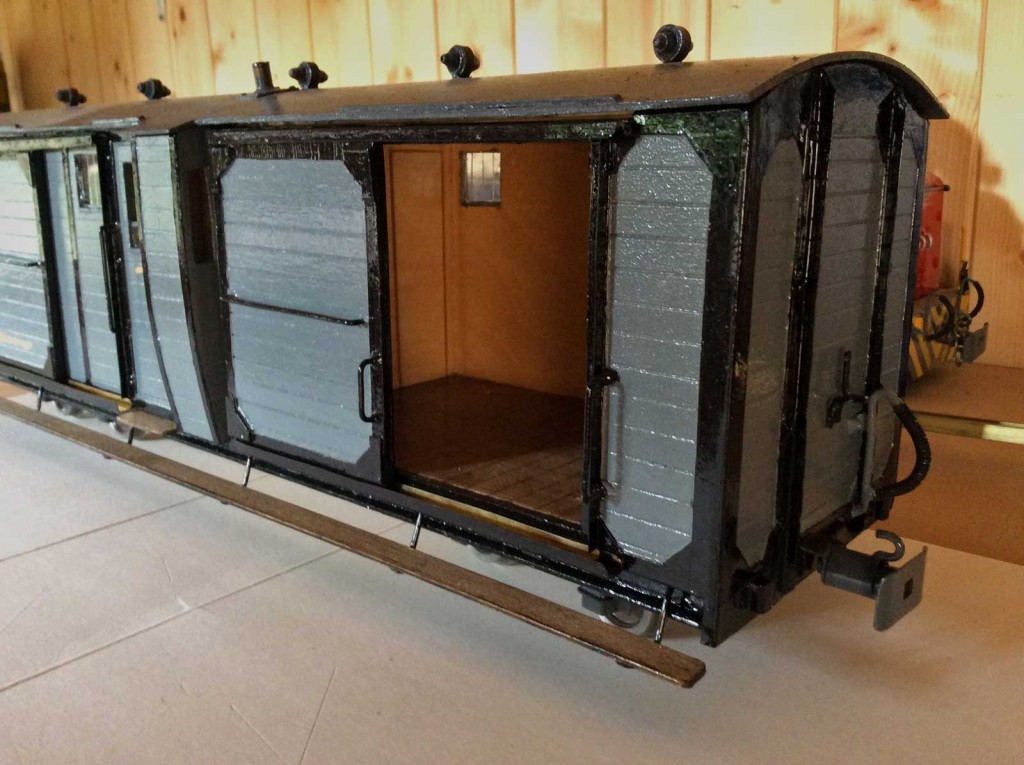 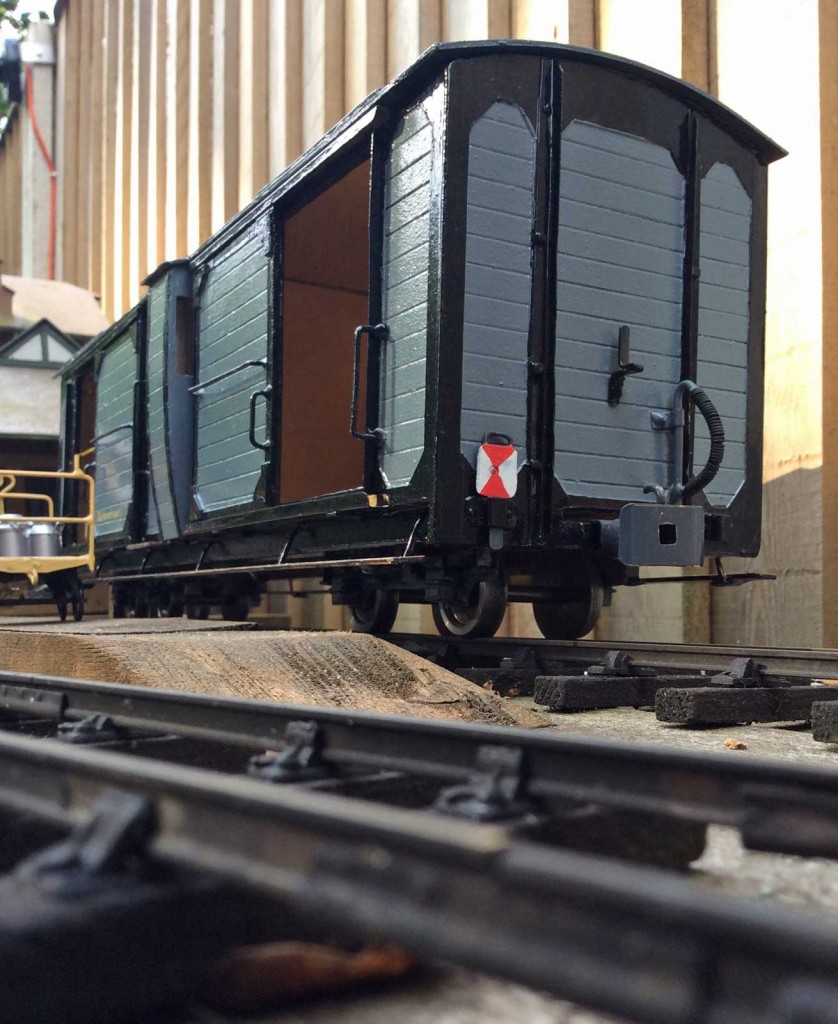 To represent its “secondhand” heritage, two different lamp bracket styles are fitted to the ends. Internally the guard has a brake valve and hand wheel, along with a stove.

The underframe is square section DIY batten, with thin ply glued to the bottom to look like girder flange. This is glued under the floor with notches to clear the bottom door channel supports. 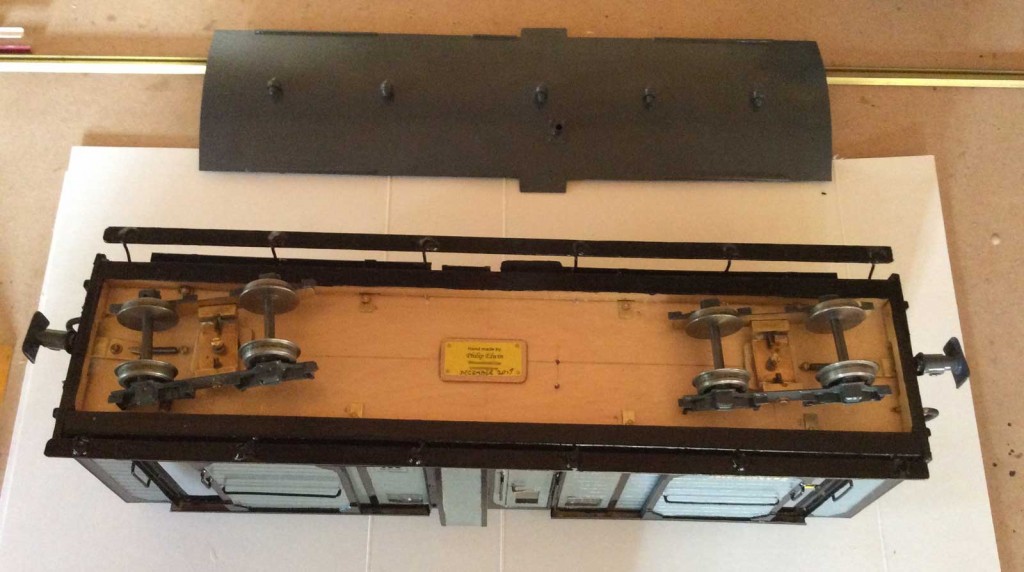 Bogies are fabricated from brass sheet and bar with Brandbright steel wheels fitted. You can’t really see them when running, so the detail is a bit over the top, but they match some of my other stock. 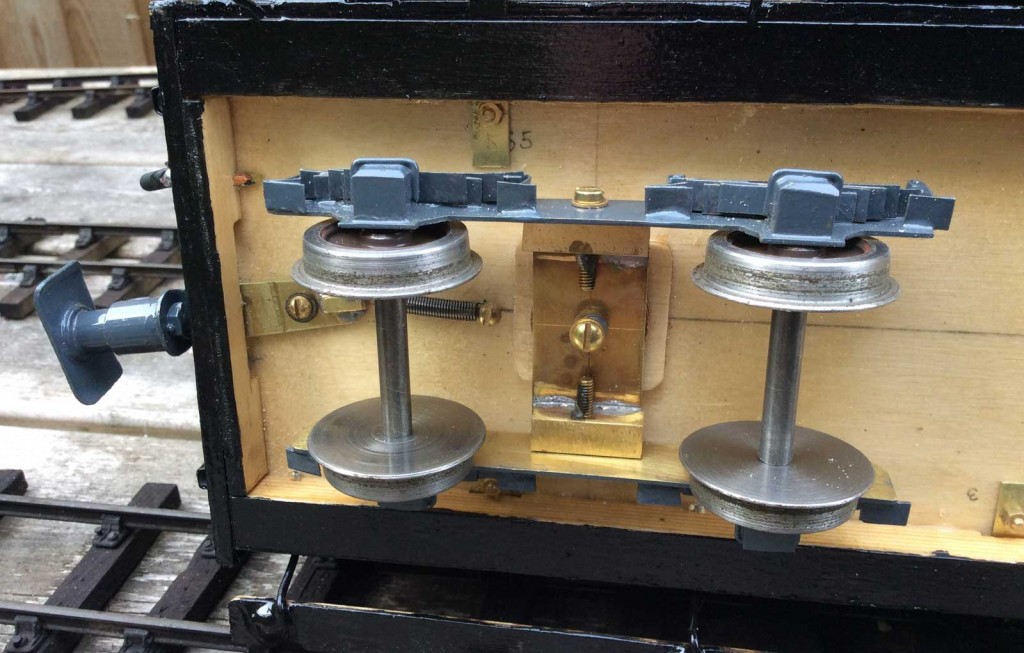 I have to say this all seems a jolly sight more complicated to explain than to do. Although admittedly it was not a quick build, I think (hope) the finished van looks as if it might well be a model of the real thing. 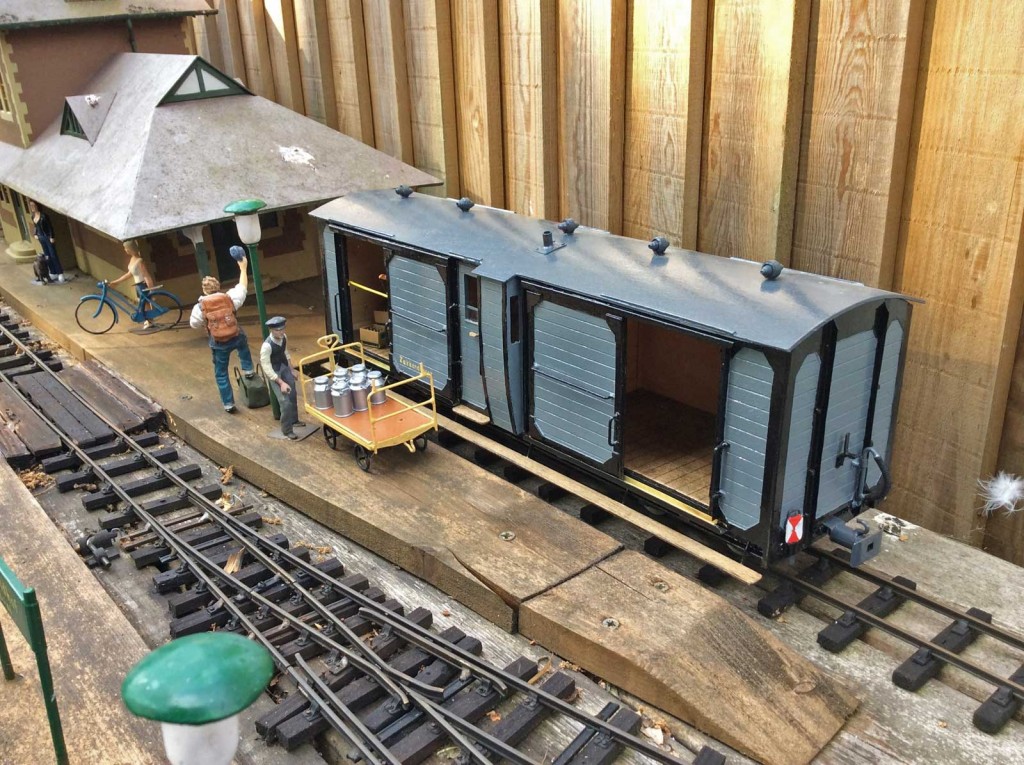