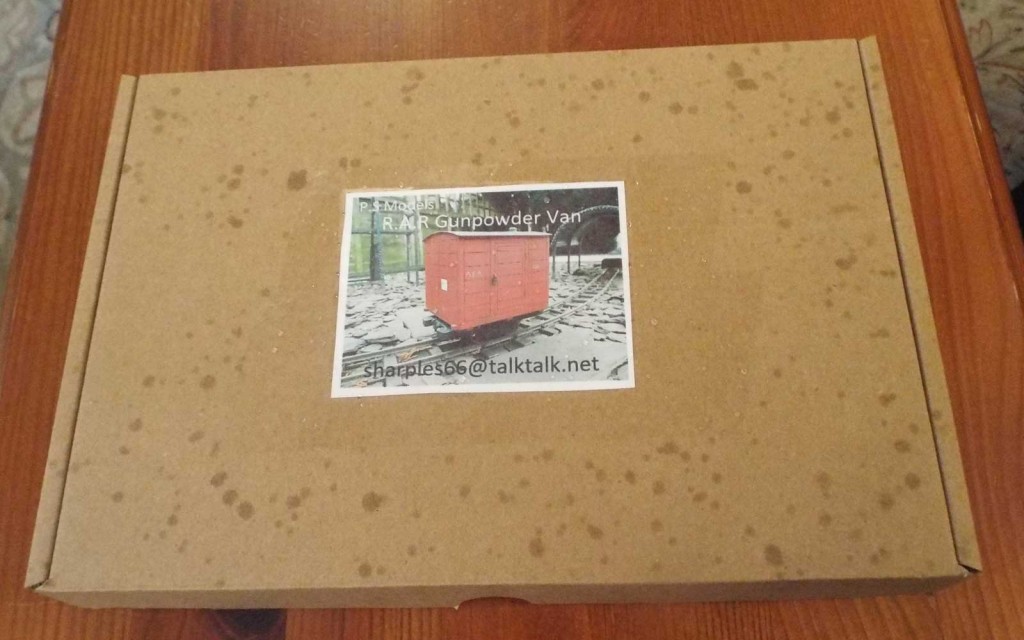 The first item of rolling stock that I bought for Slug’s Crossing was this Phil Sharples Gunpowder van, which comes in a substantial (but rain spattered) cardboard box. 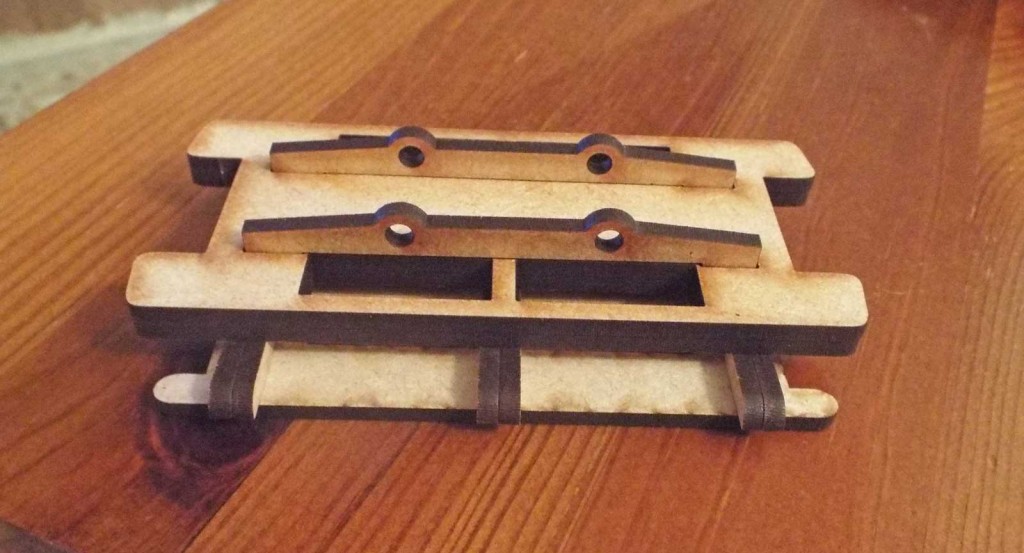 Having had a closer look, it’s very cleverly designed: you get an underframe less wheels (seen here upside down) and a body, both of which can be spray painted before final assembly – the axle bearings are eyelets which can be added after painting. The only thing I am going to do is to replace the Plasticard roof with one made of 2mm ply.

Seen the right way up, you can see the body floor attached to the underframe. At this point, the whole had been assembled without glue, just to see how it went together. 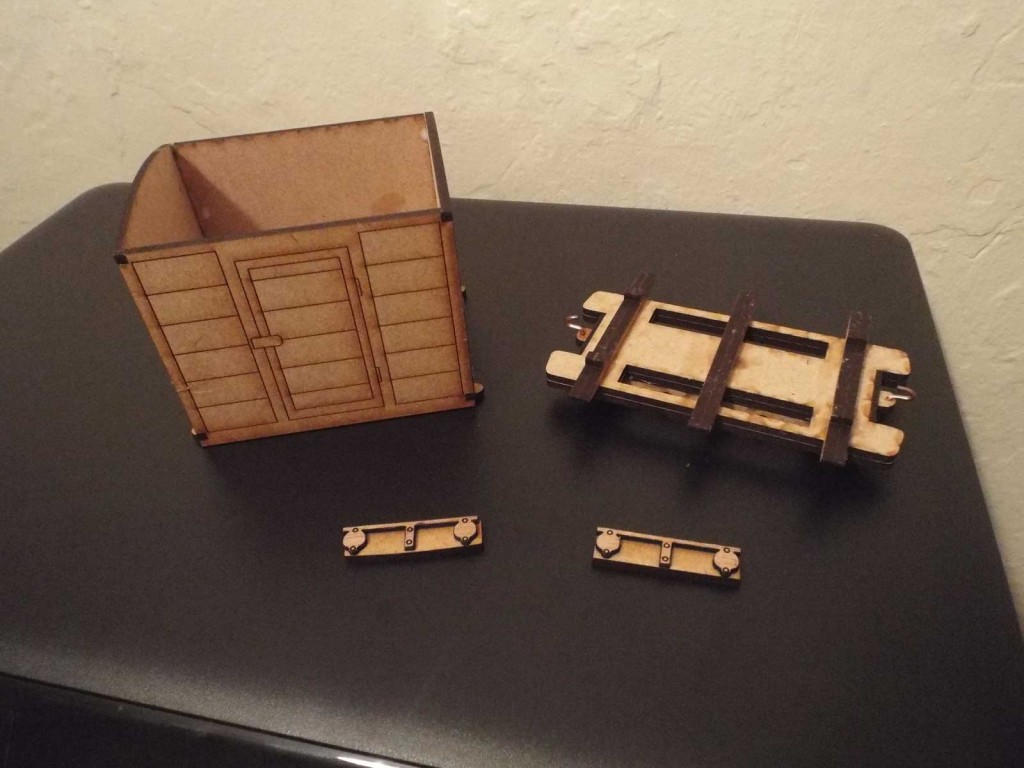 After the first sticking session, this is what you get: the van body assembled (less roof), the chassis with couplings added and the axlebox details. After a night to thoroughly dry out, it’s off to the Spray Shop! 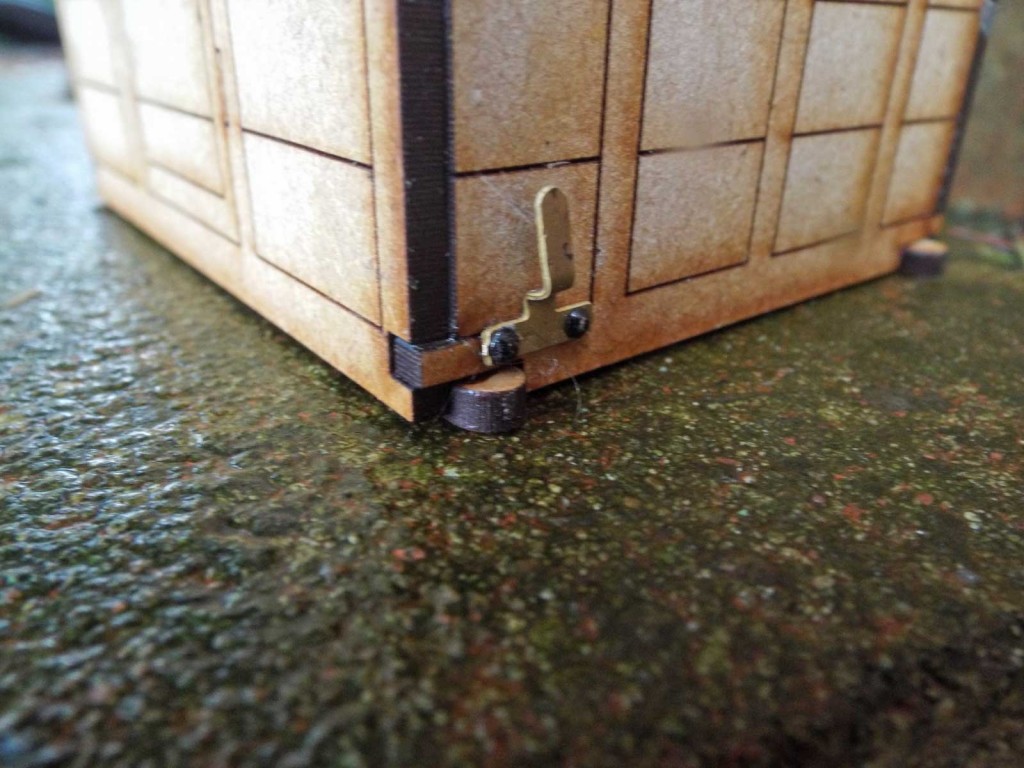 However… there was one job before the rattle cans were brought into play: I decided to add a pair of Roundhouse lamp irons to the van – it’s big and chunky enough (and you can’t see inside to see where the pins come out) to take them. 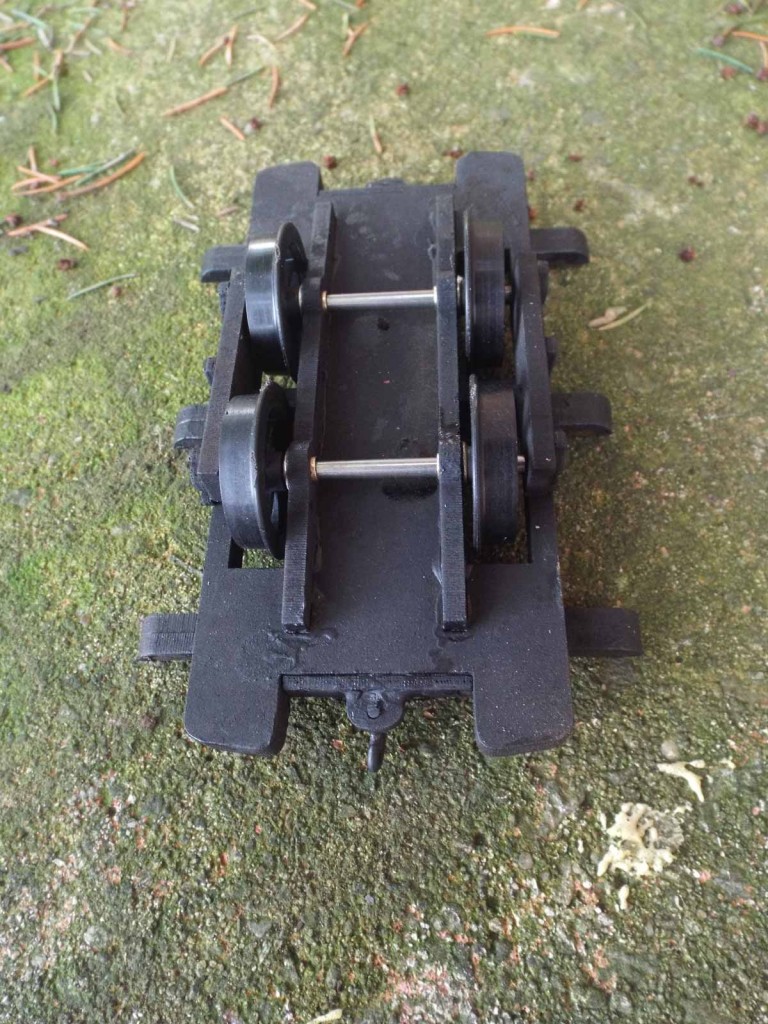 Unfortunately, I didn’t follow Uncle Phil’s instructions, which said I should’ve installed the axles and wheels right at the beginning of the build, so at this point I had to get creative. Having glued the bearings in position, gentle use of a small hammer and punch got the wheels (a) on the axles and (b) to gauge. Following this, the axlebox detail was added and the bottom half was done. 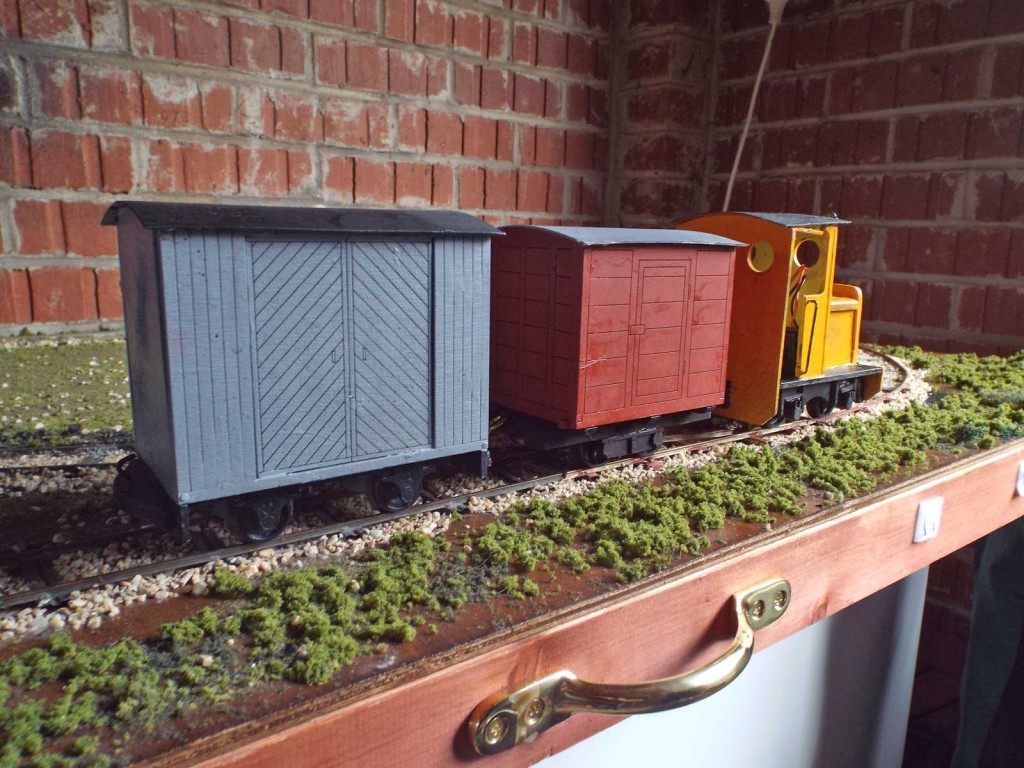 The final job was to spray paint the roof before gluing it to the body, and the body to the chassis, and there we were… done! The van is seen here undergoing test running on Slug’s Crossing, in company with an IP Engineering Ezee van. 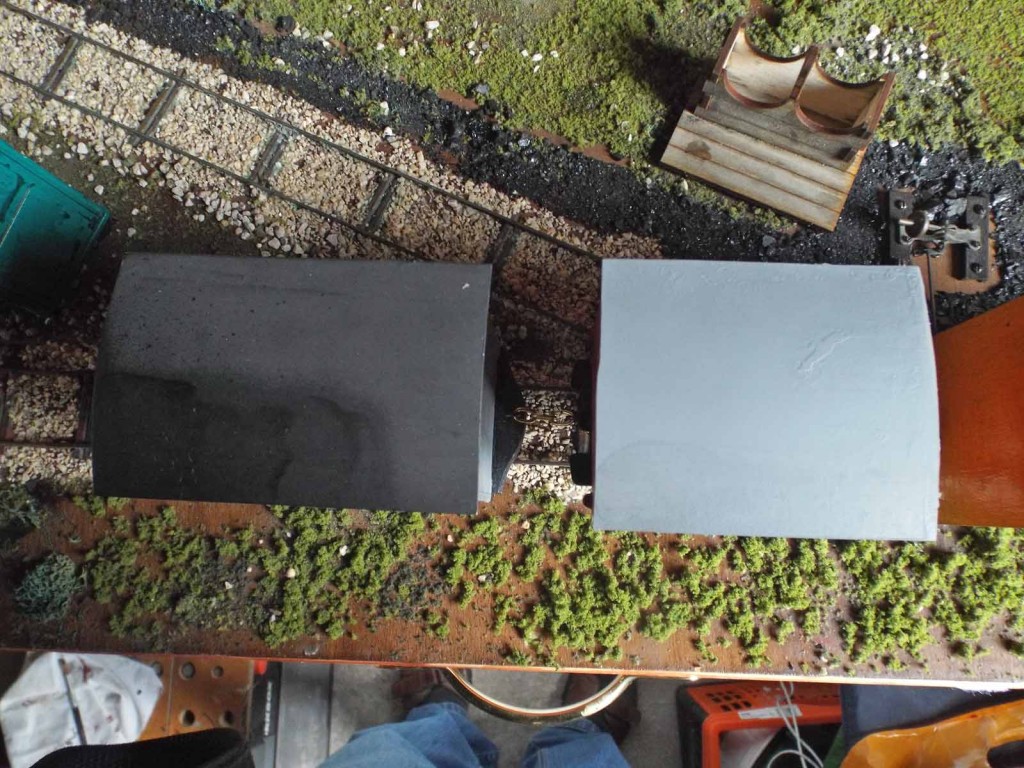 You will note that the van is shorter and fatter than its competitor.

All in all this is a delightful little kit which is easy to build. 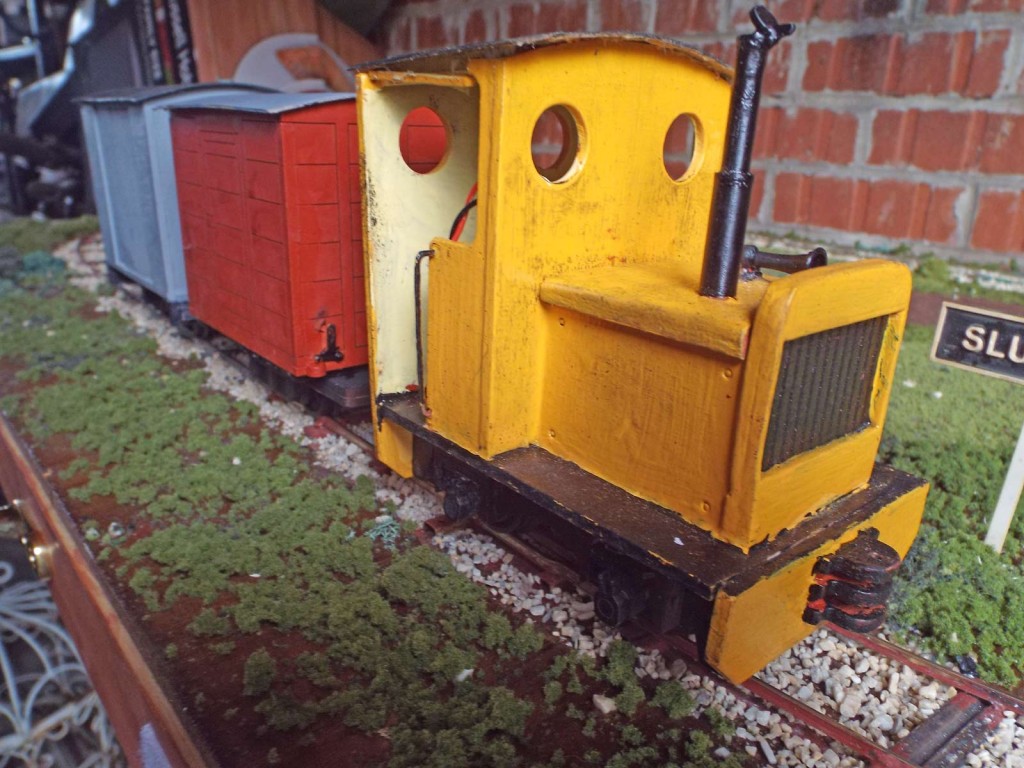