Since the Great Central Railway (GCR) began holding an annual model railways event a number of GCR volunteers, myself included, have set up a table top 45mm gauge layout, displaying our large fleet of rolling stock. Between us we have successfully created a rake of mineral wagons, a mixed freight, a box van train and numerous passenger rakes; but what was missing to complete the GCR representation in 16mm on 45mm track was a Travelling Post Office (TPO).

After the 2015 event and over a few pints in the pub the comment was made “I bet we can’t make an operational TPO”. 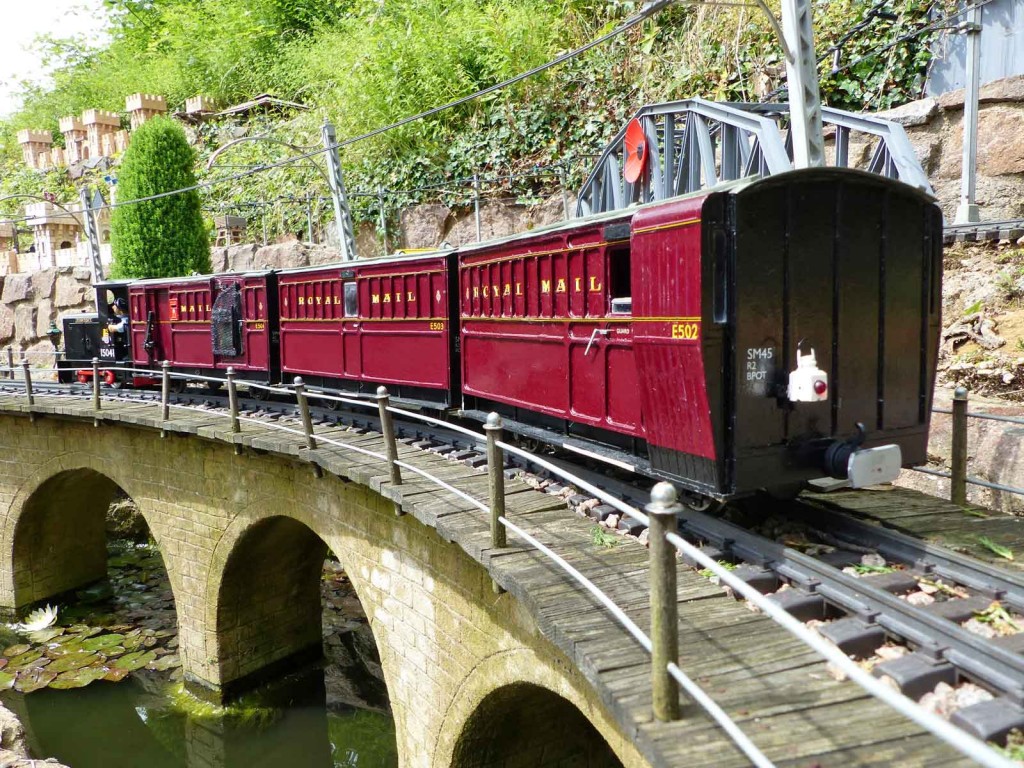 Another view of the TPO set

With a year to plan and build, I set to work. The starting point was an IP engineering coach from Ivan’s Freelance range. A three compartment coach was purchased, and with a similar look to full size Gresley coaches the design took on the appearance of the Gresley Sorter and Tender – real examples can be seen on the GCR. Construction of the coach was simple; instead of pushing out the blanks in the coach windows, these were filled and sanded to create solid coach sides. The side which was to receive the TPO apparatus had rather more substantial modification, with recesses mirroring those on the real vehicles. A removable roof was also installed, along with panel ribbing again mirroring the real TPO vehicles. A coat of BR Maroon and post office decals and lining from Fox Transfers completed the construction. 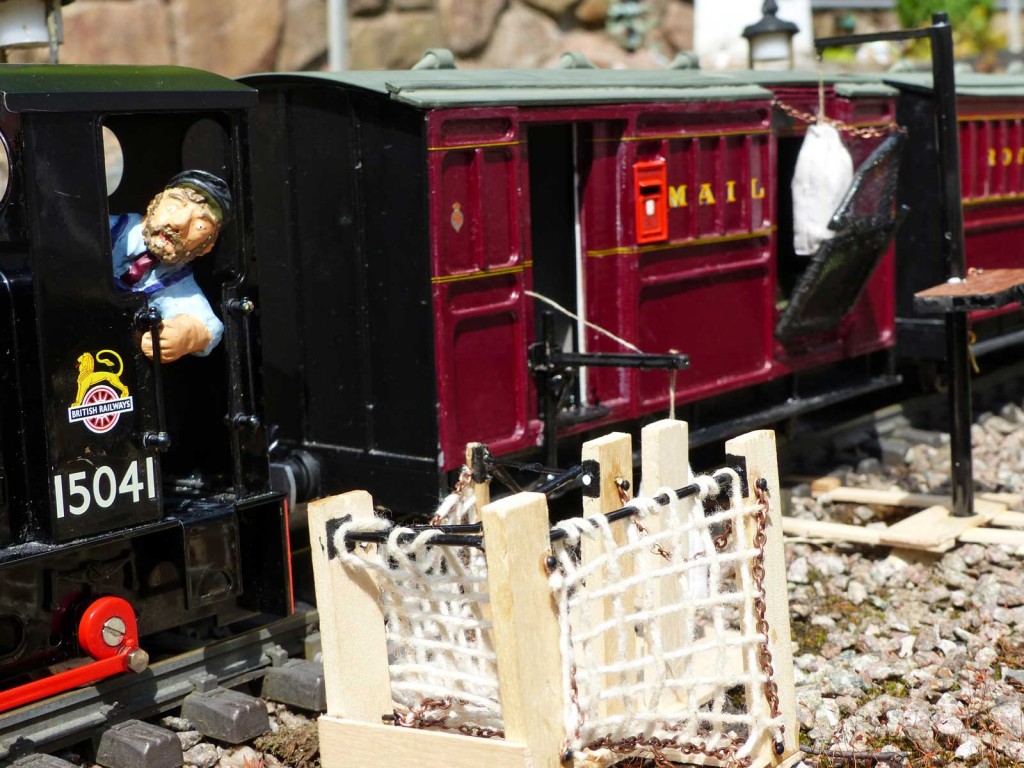 The solution to the workings of the actual apparatus came from my other modelling hobby, radio controlled model boats. The armature and net for dropping and picking up the mail bags were again simple to construct, mirroring the real vehicles. The armature is hinged and spring loaded in the extended position, and this is then raised using a servo winch out of a model yacht. When the winch is reeled out the arm lowers under spring tension, and it is winched back into the stowage position. A magnet is installed at the end of the arm to attach the mail bag. The net is hinged, a supporting frame holding a mosquito net. The net is controlled by a servo originally from the model yacht’s rudder and is pushed out and pulled in.

The mail bags are commercially acquired US Domestic Mail bags, fitted with a single chain loop to allow the magnet to hold the bag. 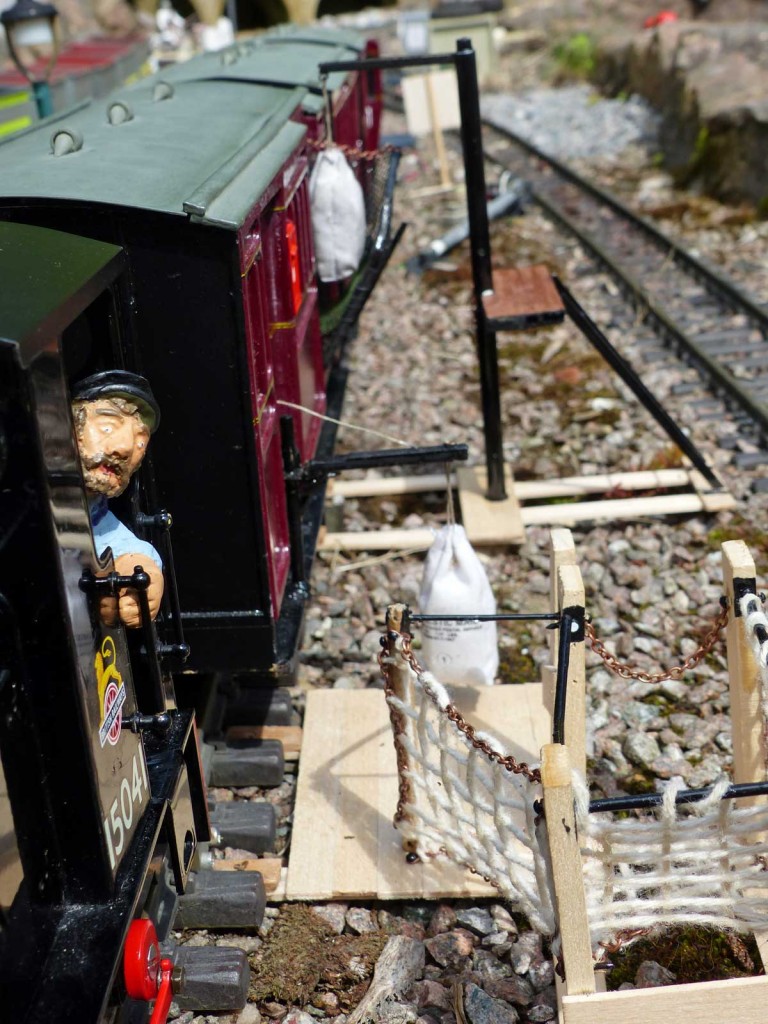 Lineside equipment again mirror the real apparatus seen at Quorn and Woodhouse. The net has a bar across the opening that knocks the bag off the coach, and the lineside arm holds a bag, via a magnet, in the path of the approaching net.

With the start of the 2016 GCR Model Railway Event and the TPO set up, the first dynamic runs began. It was found that only locomotives the same width or narrower than the TPO coach could successfully carry out a drop. Operation of the TPO is a team effort between TPO operator and Driver: the bag has to be lowered not too early or it will swing and miss the lineside net. Too fast and the bag being caught will bounce out of the net. 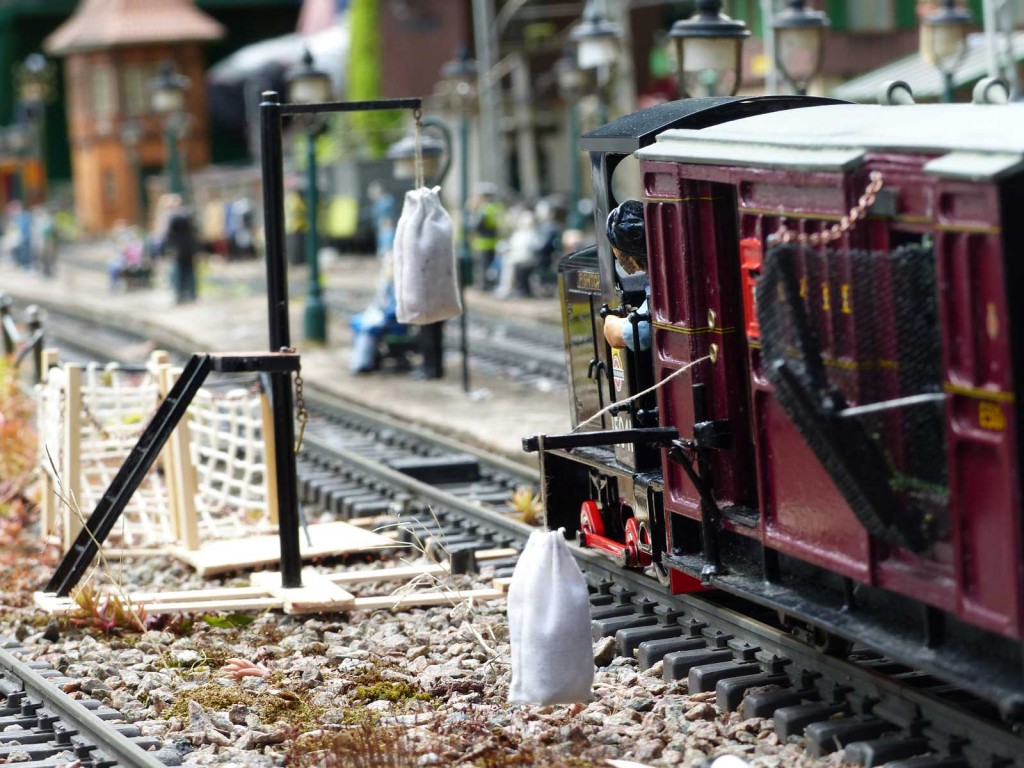 All ready to exchange the mailbags

There were many successful drops, and equally as many failures; it always manages to pull a sizable crowd. As I write this I am sat in the middle of the 2017 event, again with a sizeable crowd and the TPO dropping and picking up bag after bag. 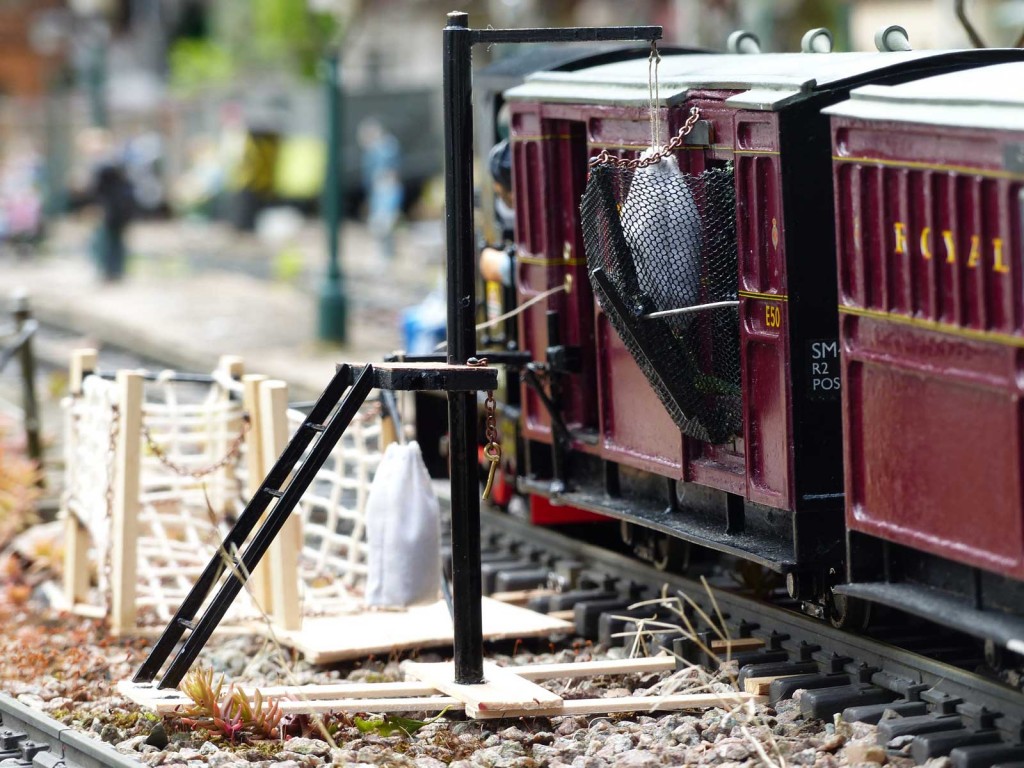 The moment of exchange

I think it’s safe to say the challenge laid down over 2 years ago has been met.