March 2018 – A new Station building, but, we apologise for the inconvenience!

Home » Model of the Month » March 2018 – A new Station building, but, we apologise for the inconvenience!
Previous Next

March 2018 – A new Station building, but, we apologise for the inconvenience!

Above: the last train of the day waits outside the new station building on a fine evening.

During the process of creating a new station area on my line I envisaged that a Country Station kit from the excellent Pendle Valley Workshop range (I have no connections with the firm) would be my preferred station building and accordingly I made space for one in my plans. The kit appeared to be straightforward but the instructions warned that getting the corners of the walls fixed perpendicular at the outset is a key element to the success of fitting the roof, as it is essentially three buildings joined together. Despite my best efforts there was still a need for some shaping and filling of the resin castings to ensure the roof sections were all horizontal, at the right level and set so that the central ridge was as close as possible at right angles to each end ridge.

The overhangs at the gables and at the gutters were not all equal but I hoped that the decorative bargeboards would help to disguise this fact at the gables. To disguise the horizontal roof overhangs, I decided to remove the gutter castings that came as part of the roof sections and planned to fit gutter boards and plastic gutters separately. With the annual running season approaching and the building in a basic form, with the walls and roof done but not much else, a quick coat of paint was applied so that the station could be temporarily located in its position in the garden for the summer. Then, over the following autumn, work restarted on the building, with the stonework being painted and picked out in more detail.

During the summer I had realised that the new site could actually take a couple of extra buildings and by the winter I was getting ideas of extending the station building. This station kit makes into a very fine building with, essentially, an open entrance hall with a large room on each side. I envisaged these rooms would be for a Waiting Room and a Booking Office. What seemed to be missing from such a grand building were the Conveniences for the passengers! A Pendle Valley Ticket Office and a Gents lean-to Convenience were subsequently bought, both of which I planned to build on to the main building. The styles of certain features of the Ticket Office kit, such as doors, windows and lintels, are different to the main building, but it would simply represent a later addition to the original construction, which in a way it was.

The three kits were combined to create the overall building.

The Gents lean-to was next, and as this comes as a kit with three walls, the direction of the slope of the corrugated roof is predetermined. However, the end of the extended main building that I had available to use meant that the roof would drain onto the platform, which I felt would not be right. I therefore cut off the timber wall-plate and the top row of stonework from the sidewall, and then cut and re-positioned the individual stones so that the slope would be reversed but the stonework faces would be retained. The front and back walls were then swopped over and the wall-plate was refitted. Once all the extension pieces were fixed in place, several stages of “making good” were necessary at all the alterations and joints of both parts of the extension. This was done using epoxy putty suitably sculpted whilst still soft.

The bargeboards as supplied for the main building kit are some very nice etched brass perforated strips, but the Ticket Office kit comes with bargeboards of a different design to those for the main building. It occurred to me that all the bargeboards for the whole of the building could, instead, be made from matching timber sections, and I had an idea to make some that were suitably carved to a nice shape. I could then, perhaps, make use of the perforated brass sections to make decorative ridge tiling for all parts of the roof, as there would be enough, as supplied, to include the extension roof. So, the plastic ridge tile sections that I had previously fitted to the main building were prised off and I set too making the new ridge tile sections. To fit the brass sections on to the ridges I decided I that needed something to hold them vertical.

I decided to solder them to 10mm brass angle sections, bought from my local DIY shop, before they were fitted to the roof. The angle sections were cut to length and trimmed at match the roof slopes at the intersections. Shallow saw cuts were made at regular intervals along both sides of the angles to match the decorative topping and simulate the joints between individual ridge tiles. I find it is difficult to obtain a strong glue joint to brass, and so I decided that some extra fixings may be required. I drilled and tapped into the corners of angles to allow two ½” 10BA bolts to be soldered into each piece, with their countersunk heads protruding downwards. These would drop through holes pre-drilled in the ridges of the roof panels and allow epoxy putty to be molded around the bolt heads on the underside of the ridges to give additional anchorages.

To solder the ridge pieces to the angles I made up a jig using a length of 4” x 2” timber onto which two lengths of 5mm thick beading were screwed with a gap between them to hold a length of angle firmly and such that the corner was uppermost and just level with the tops of the beading (holes being drilled in the 4” x 2” to clear the aforementioned bolts). Two short lengths of aluminium angle were cut to support the perforated brass section in a vertical position so that it would just touch the top of the corner of the angle section. After tinning both pieces they were positioned together and the aluminium angles were clamped in place. The two pieces were then soldered together, moving the supporting angles along as necessary to enable the full length to be soldered in stages. The photos probably make this clearer than any description! After cleaning up the solder where necessary the ridge pieces were scrubbed and washed to remove surplus flux. The chimney for the Ticket Office kit is intended to be fitted across the ridge and so a short length of the decorative ridge was then cut away to accommodate the stack, following which all the ridge sections were etch primed ready to be glued into place. 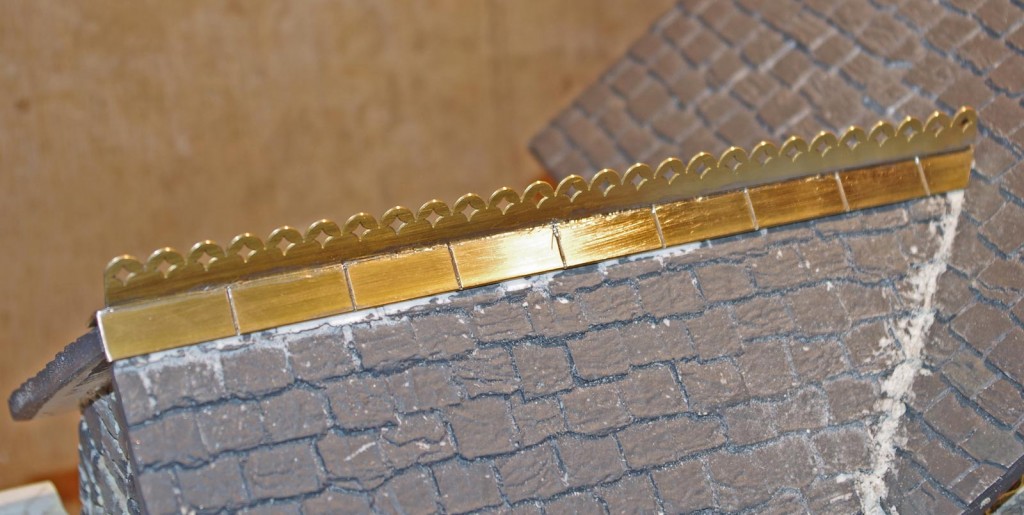 A completed ridge tile section is checked on the extension roof.

The main building kit comes with parts for two benches that are intended to be fitted one each side of the open entrance hall and these each have two stone block supports. But, as the new Ticket Hatch now occupied one of those spaces, I only needed one bench and I decided to use the two spare stone blocks to increase the height of the chimney stack to the extension, in view of the lower ridge height. The two stone blocks are of a slightly smaller footprint than the chimney capping and so I used epoxy putty to dress these to the right size and then cut brickwork courses into the hardened putty to match the angled pieces that came with the kit.

As, by now, the building was becoming quite large to move around for painting and fixing of the last bits and pieces, I decided to delay fitting the ridge sections and chimneys until the end, to avoid damage. The new bargeboards were cut from 4mm x 18mm timber strip from the DIY shop. Some of these barge boards were of differing lengths and so I made the decoration at the tops and bottoms the same and included a suitably wavy section in between to allow for the variable lengths. A pack of extra finials was bought to add to those supplied with the station building kit and these were fitted to the ends of each ridge. The fancy ridge tiles, however, rather dwarf the finials and so at some stage I intend to fabricate some slightly larger finials to replace the ones on the building. 4 mm x 12 mm timber strip was cut to make the gutter boards which were glued into place along with the replacement plastic guttering.

The downpipes on the kits are moulded into the wall castings and needed to be trimmed slightly to accommodate the new gutter boards. The offcuts and a couple of short lengths of brass tube were used to join the downpipes to the new gutters. To complete the building, a selection of additional matching etched brass signs were bought from Pendle Valley Workshop for the doors and some advertising posters were bought for the walls. I had a few cast white metal birds left over from another project and the chimneys just seemed to be crying out for a couple of seagulls to be perched on them as a final touch!