Home » Model of the Month » February 2018 – Sir Haydnish
Previous Next

The Talyllyn’s number three Sir Haydn has always seemed to me one of the most delightful and attractive of all narrow gauge locos, possibly because it was the first I ever consciously encountered. True, this was in a photograph rather than real life, and a black and white photograph to boot, but there was something about the size, shape and feel of the ex-Corris engine which really struck a chord. Opinions differ but for me the TR did the loco a considerable favour with the various alterations they made when they acquired it: the original, with its cab looking for all the world as though a ten-ton weight had fallen on it from on high, is a sorry thing in comparison.

Back when the Association was in its infancy and the hobby hadn’t yet exploded into rank commercialisation, I’d managed to put together a couple of bodged Mamod conversions: Rhian a vaguely George England saddle tank, and Y Ddraig Goch a double Fairlie which was essentially two Rhians stuck together. I did sketch out a Mamod-based Sir Haydn but I couldn’t make it work: though I’ve no particular interest in exact scale modelling – my stuff is intended to evoke rather than reproduce: it has to look reasonably right at a reasonable distance, no more – that was a step too far even for me: the unusual size of TR3’s driving wheels contribute a good deal to its overall look.

So I was pleased when the short-lived firm of Lindale Models brought out Sam, an 0-4-0 version of their hefty 0-6-0 Caledonia. 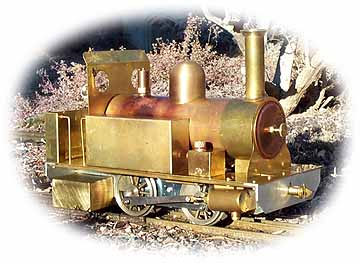 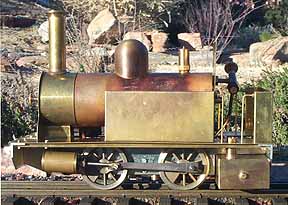 This was an interesting model: sold as a bolt-together kit, it had a meths-fired pot boiler, a single outside cylinder balanced by a dummy one on the other side (which could make for a slightly jerky run), a good-size displacement lubricator and, fascinatingly, two regulators: a standard control lever in the cab and a large handwheel in the centre of the smokebox door which throttled back the exhaust as an aid to slow running. This latter was pretty startling, being larger and protruding further than any prototype, but back in those innocent and happier days people didn’t seem to care too much about that.

More to the point for my purposes, Sam had massive driving wheels (inherited like so many of its other parts, from its larger stablemate). I looked at it, wondered, and eventually succumbed and bought one.

Much as I would have like to have made my Sir Haydn-ish loco (the name eventually stuck, albeit without the hyphen) meths fired I reluctantly decided that it wouldn’t be practical. I did toy with the idea of a discreet black firebox enclosing the burner as on Rhian, with the gasses venting from under the saddle tank, but the clearance would have been very tight – more on that in a moment. So gas it had to be, which meant I needed a boiler.

In Tom Merlin Cooper’s range back then was a pleasing side tank called Little Wonder (a confusing name if you happened to be familiar with the Festiniog’s pioneering double Fairlie but it didn’t seem to bother him): 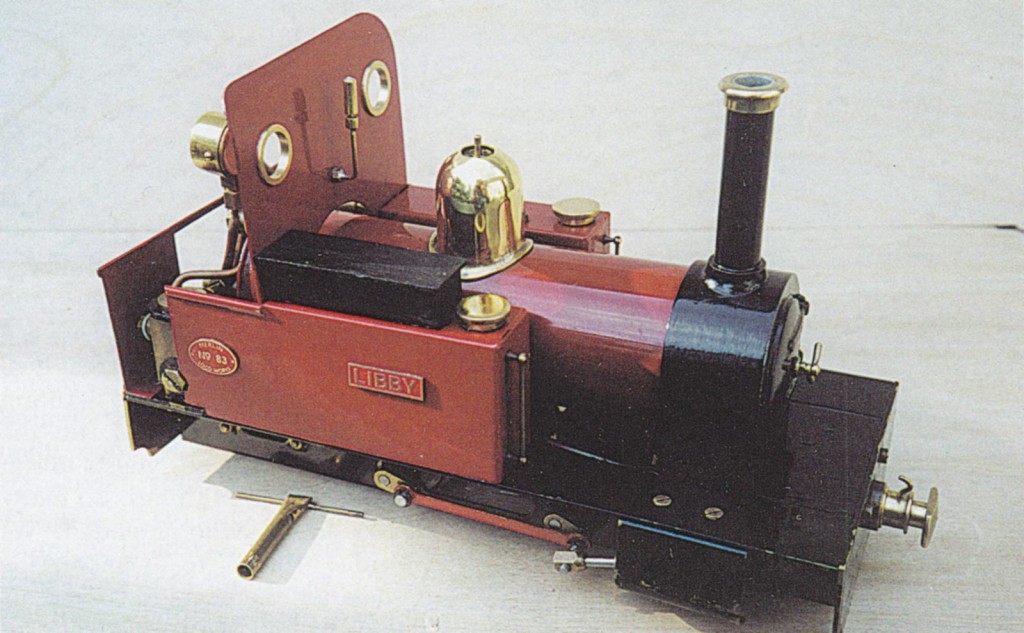 Tom would happily sell bits and pieces as well as complete locos and I was able to acquire the boiler, burner and gas tank. And off I could go.

I won’t give a blow-by-blow, cut-by-file account. I’m a very long way from being a proper model engineer (or even a model engineer of any description) and there’s really not that much to say beyond “I kept trying various things until I found ones that worked”. Though I replaced the fragile die-cast coupling and connecting rods, the wheels, cylinders (I bought an extra one from Lindale), slip-eccentric motion and lubricator are all pure Sam:

and the frames only required a bit of cutting down and reshaping, with the addition of a flat plate at the back end for the cab floor.

The only real complication at that stage was that if I wanted to put the new scratchbuilt running plates at the correct (ish) height to look like the Talyllyn loco, the tops of the Lindale cylinders would protrude through them. I wasn’t inclined to mess about moving such vital components so I just cut two holes in the running plates and hid the bits that stuck out on top: there’s a tool chest on one side and a plain box which serves absolutely no obvious purpose on the other.

The toolbox is visible on the view of my first effort: 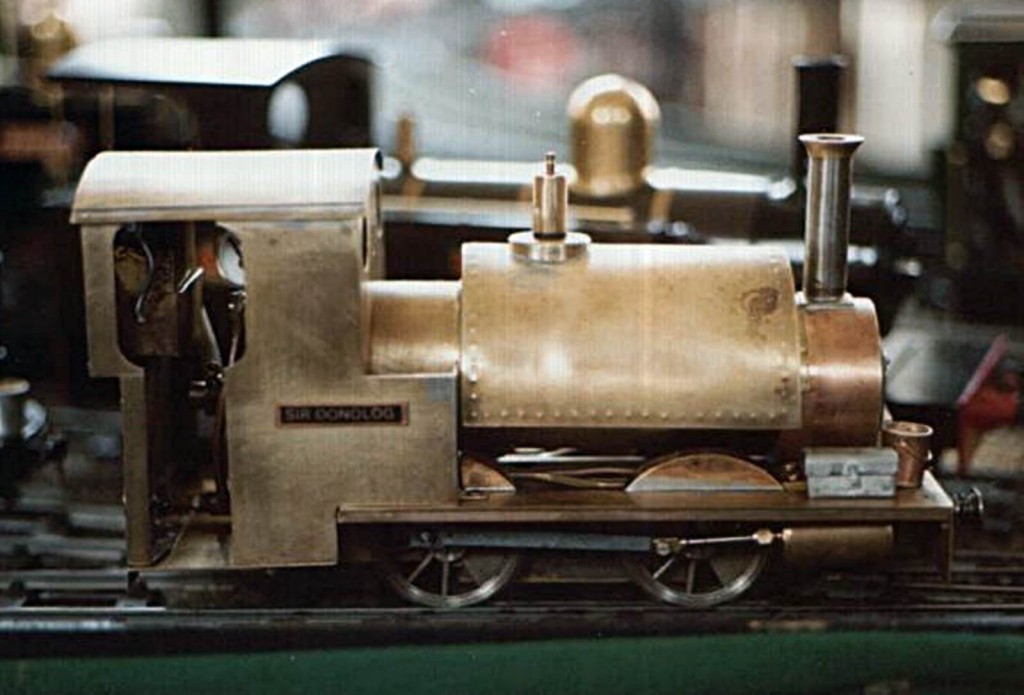 This was getting there, with everything more or less where it would eventually be, but the name didn’t feel right and I was very dissatisfied with the saddle tank and remade it. It helped that I’d bought a rather nifty rivet-embossing tool with a built-in spacer which improved things no end. I changed the chimney too, replacing the Sam one.

I mentioned the lack of clearance which prevented meths firing: this is because the boiler very nearly fills the saddle tank. The smokebox is quite a bit lower and if you look closely you can see that it and the visible underside of the boiler don’t match at all. In practice though it’s not the least bit obvious and in any case, as I said, I’m happy to evoke rather than reproduce. I was interested to note that many years later Roundhouse adopted the same idea for their Bertie. 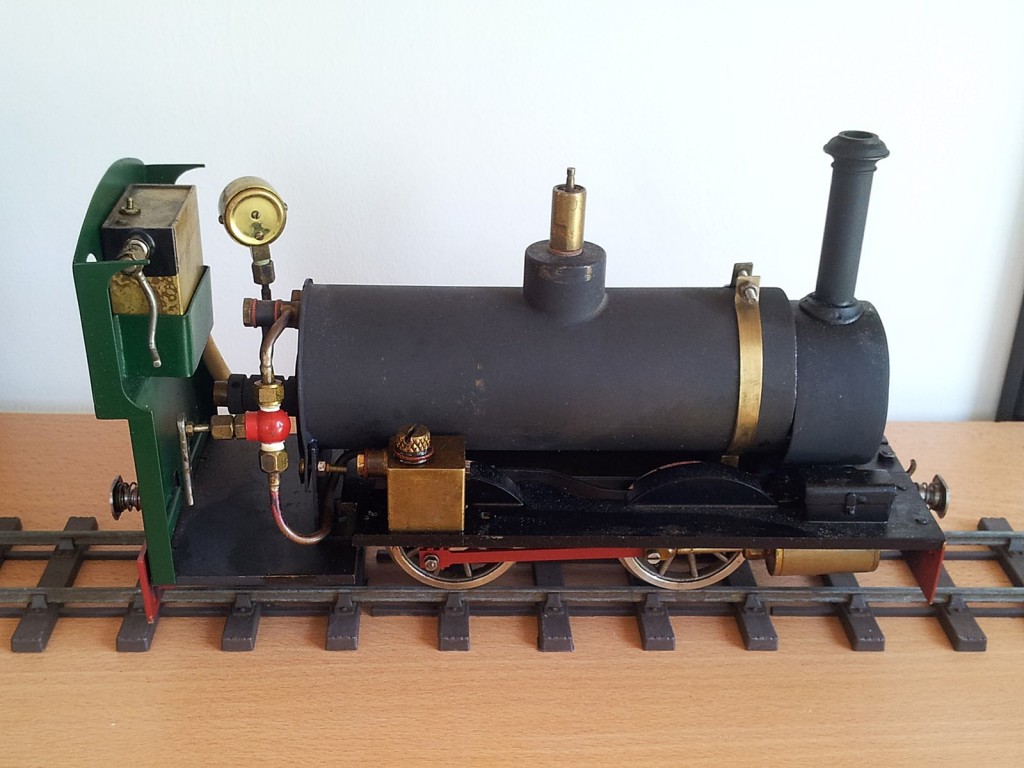 At the moment, though it will probably change at some point, the saddle tank isn’t fixed: it just sits on the boiler with a tight-fitting cutout for the dome. This not only tends to take off the paint when it’s removed and replaced, it also provides a bit of a shock for anyone who tries picking up the engine by the tank. In a more permanent arrangement the cab sides, front and roof all lift off as a single assembly for access to the gas tank and lubricator: only the rear of the cab is fixed. 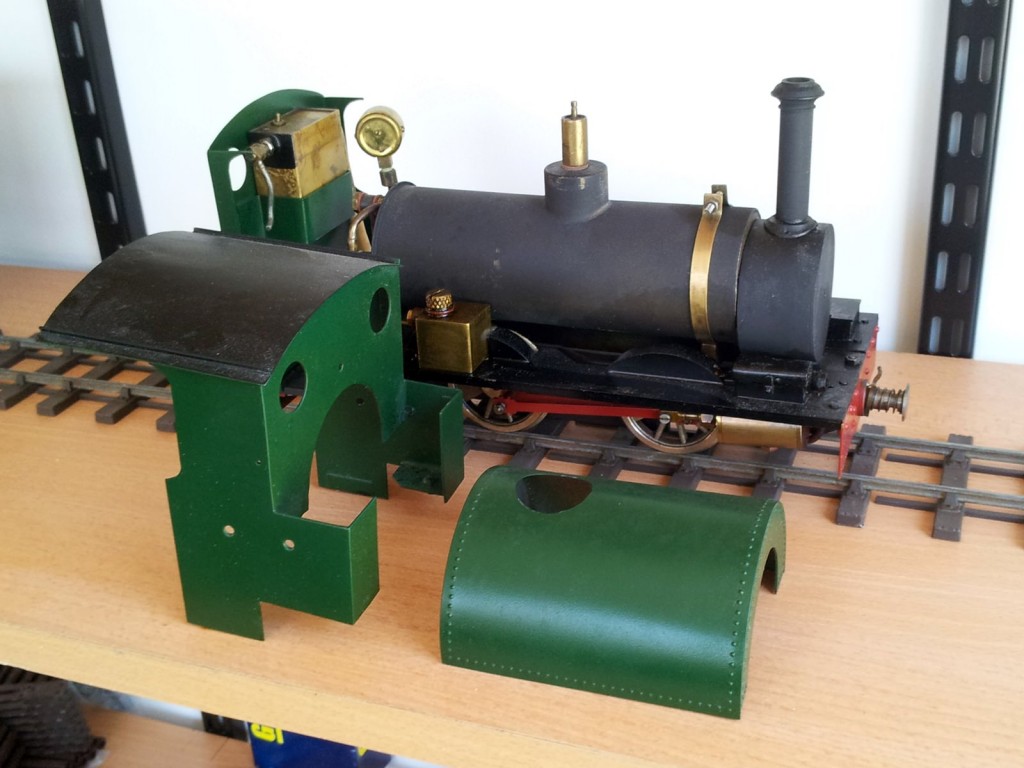 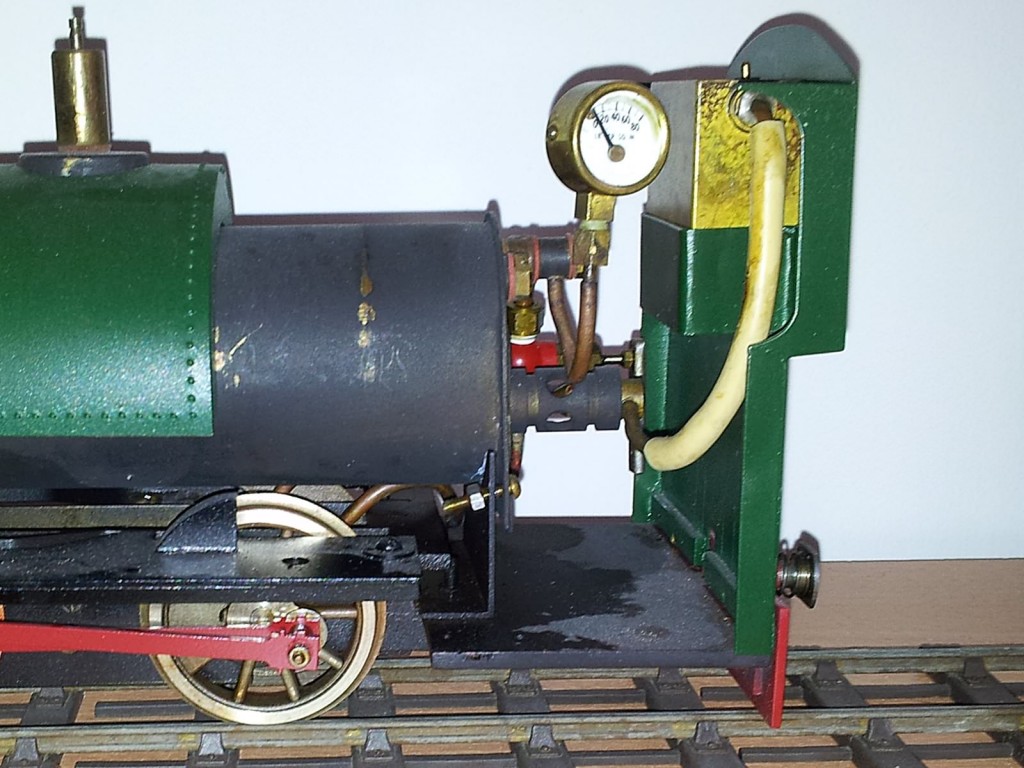 I’ve been meaning for years to change that horribly white gas pipe for something less intrusive.

There’s not much more to say really. The platework was made of various materials depending largely on what was to hand, painting was by car aerosols, running is decently slow despite the huge drivers. It’s not finished of course, but someday I’ll get around to that. For now I’m just happy to have it: for me, Sir Haydnish does exactly what it was meant to do. And as a little bit of icing on the cake I was both amazed and delighted at the AGM a couple of years ago when it sat on display alongside several magnificent true-scale models of the same loco and didn’t look as grotesquely different as I’d feared it might.

If anyone has any questions please do ask them. And whether you have been or not, thanks for reading.