Having a particular interest in the Colonel Stephens railways, it became essential to find a way of producing corrugated iron in our scale, as his buildings were made of little else. I now produce it in large quantities, made from aluminium beer cans, for myself and other modellers.

I started corrugating about a year ago using a metal tube wringer from America. This worked reasonably well, but it’s quite hard to keep the work feeding straight, tending to veer off to one side or the other, so you had to steer it by varying the pressure each side. Also it was only about 3″ wide. So now I have a heavy duty metal corrugator (also from USA) which takes 8″ sheets and has adjustment on both sides (like a mangle) so it always runs true. 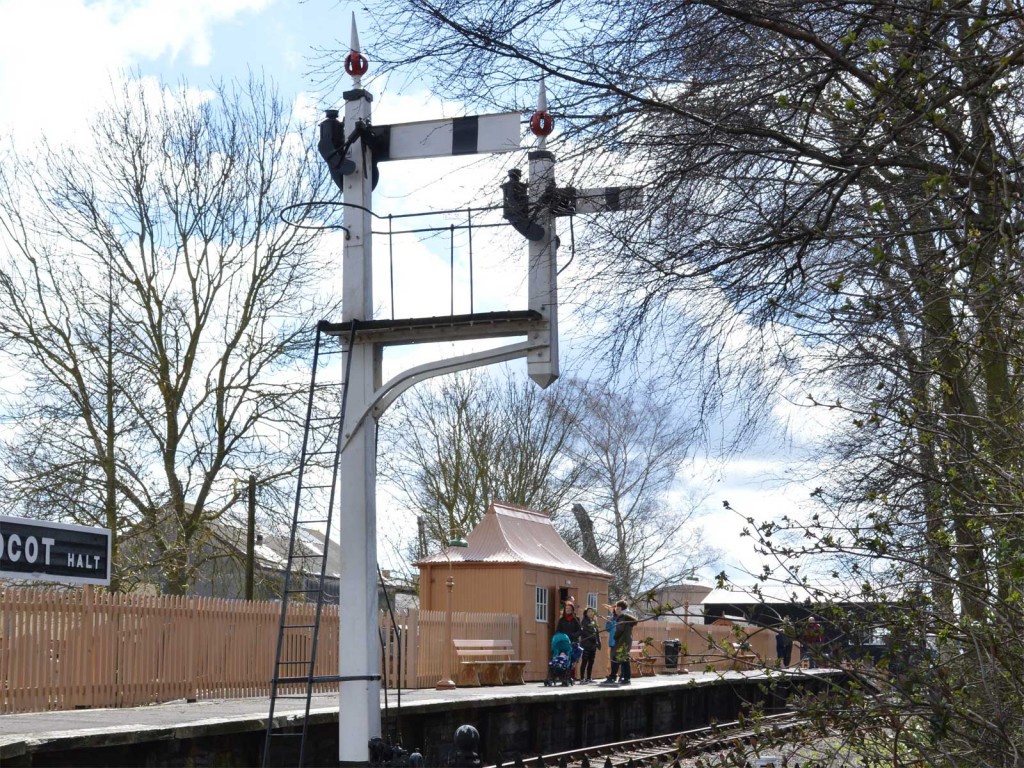 I thought the rather attractive GWR pagoda shelter, which I saw at Didcot, would be a challenge, so set to work finding a way to model the roof. I made a crude curving press by cutting a 4” diameter aluminium tube in half lengthways, giving two half shells to press the work between. But fitting two curved convex sheets at 90 degrees was not easy, until I found an old laser rule in my toolbox. Projecting a vertical line onto the corner from the correct angle enabled me to mark the corrugated metal and cut the line accurately…..

Marking the correct angle with a laser rule

But, cutting the material post corrugation is not satisfactory, as it always causes distortion, resulting in wobbly edges. When corrugated the metal shrinks to 81.5%. So, for the Mk2 building I have devised, using some wood and a lot of knicker elastic, The Stretchograph, a stretchable drawing board. Using the laser line I marked out the required shape on thick paper. Transferred this to the Stretchograph. Divided by 81.5. Multiplied by 100, stretched accordingly. Then traced this new shape onto the metal, cut it, then corrugated and curved it. It worked! The corrugation returned it to the correct length and the end curves fitted far better than on the Mk1. 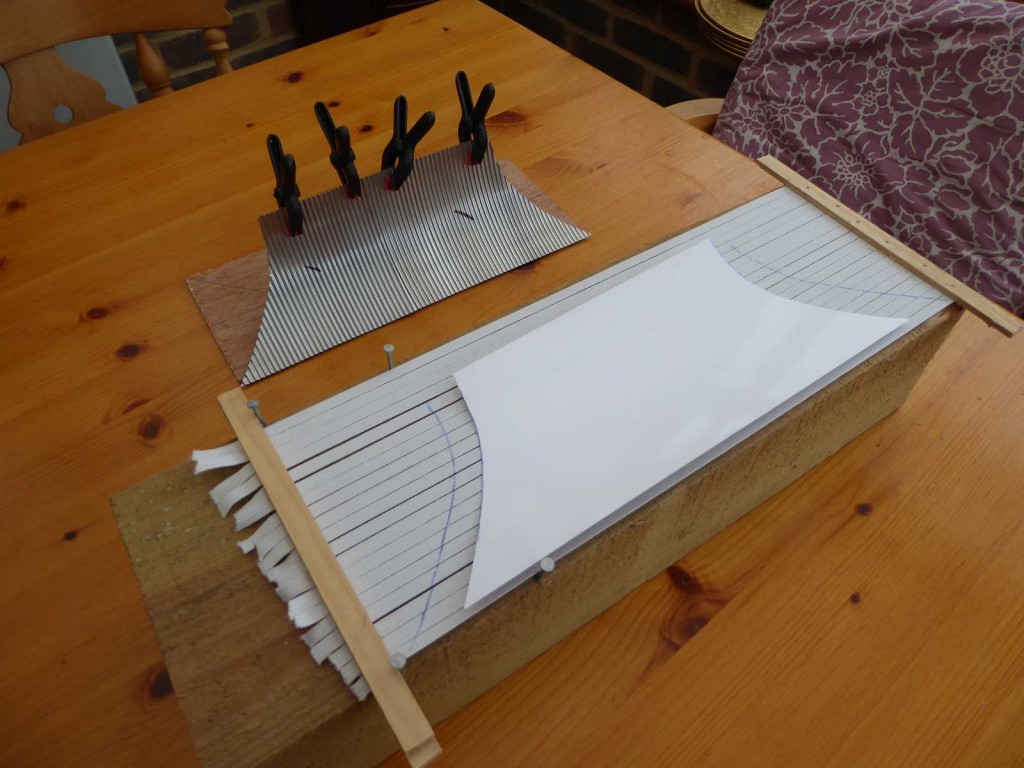 I know there must be a computer programme that can do this much better, but not one compatible with my analog brain.

I made the building out of plasticard, which is easily cut by scoring with a Stanley knife and snapping. Window apertures were difficult until I found that heating up the blade with my little chef’s blow lamp (taking care not to inhale the fumes) meant I could cut right through it. 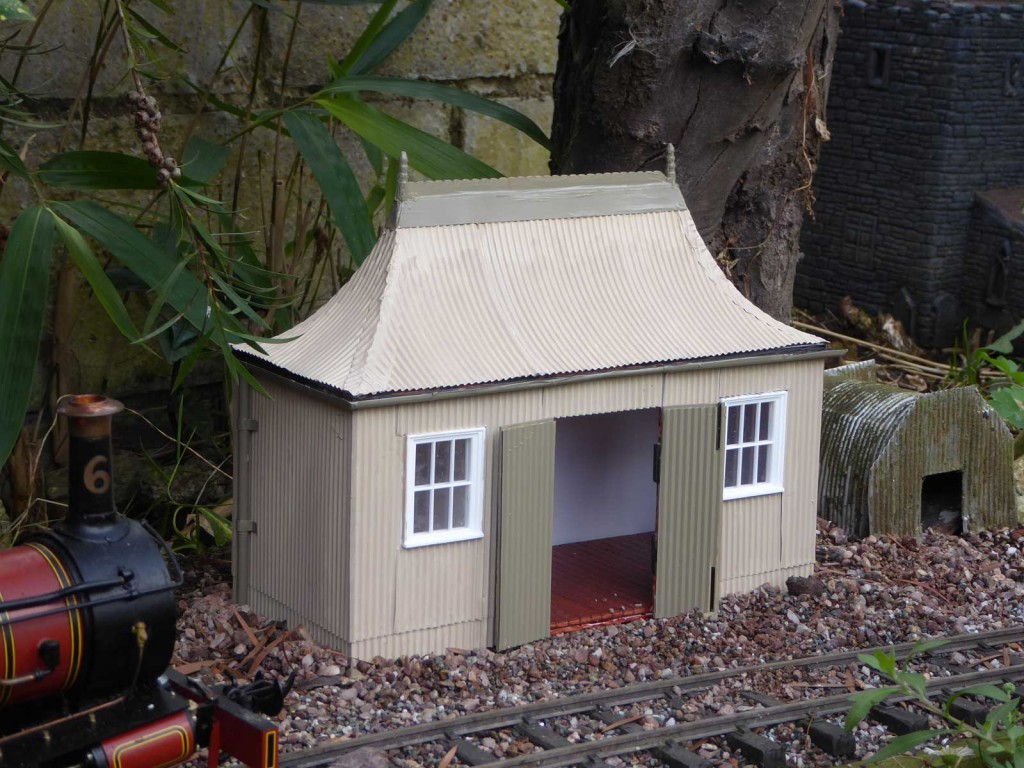 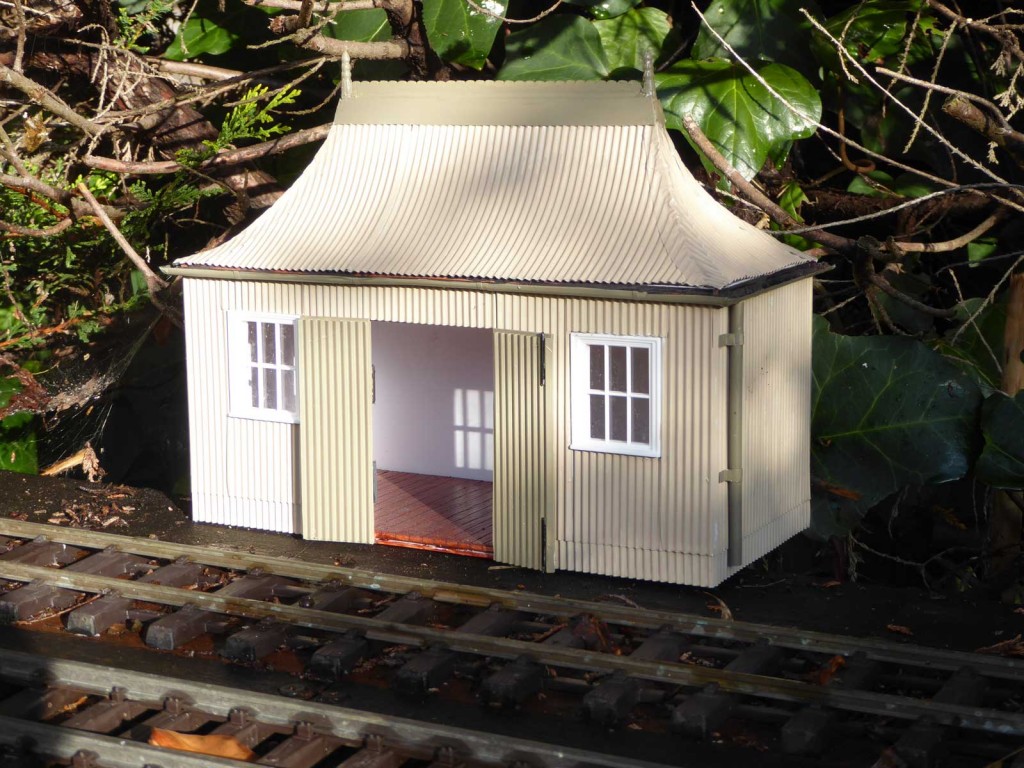 I put in a plywood floor, scored to look like boards, and used windows bought from an eBay doll’s house merchant.

These buildings have a sealing strip which connects the corners of the roof panels. For this I used the copper adhesive tape sold by garden centres to keep slugs off your vegetables. 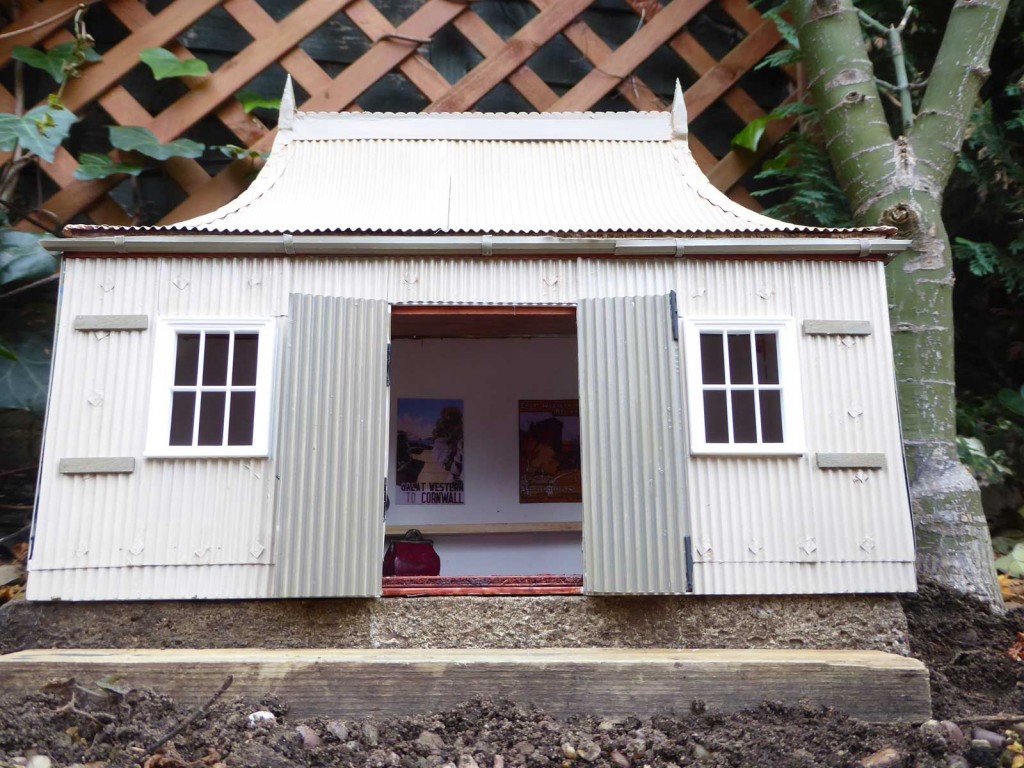 The Mk 2 pagoda, with space for notices

For the gutters, I used aluminium again, but annealed so it doesn’t argue. Finally, the roof finials are those little yellow rawlplugs with the slots filled in! I’m not happy with the roof ridge. I’d really like to find a way of making a finely detailed decorative strip, to keep off the 16mm scale pigeons, but I’m still working on that one. 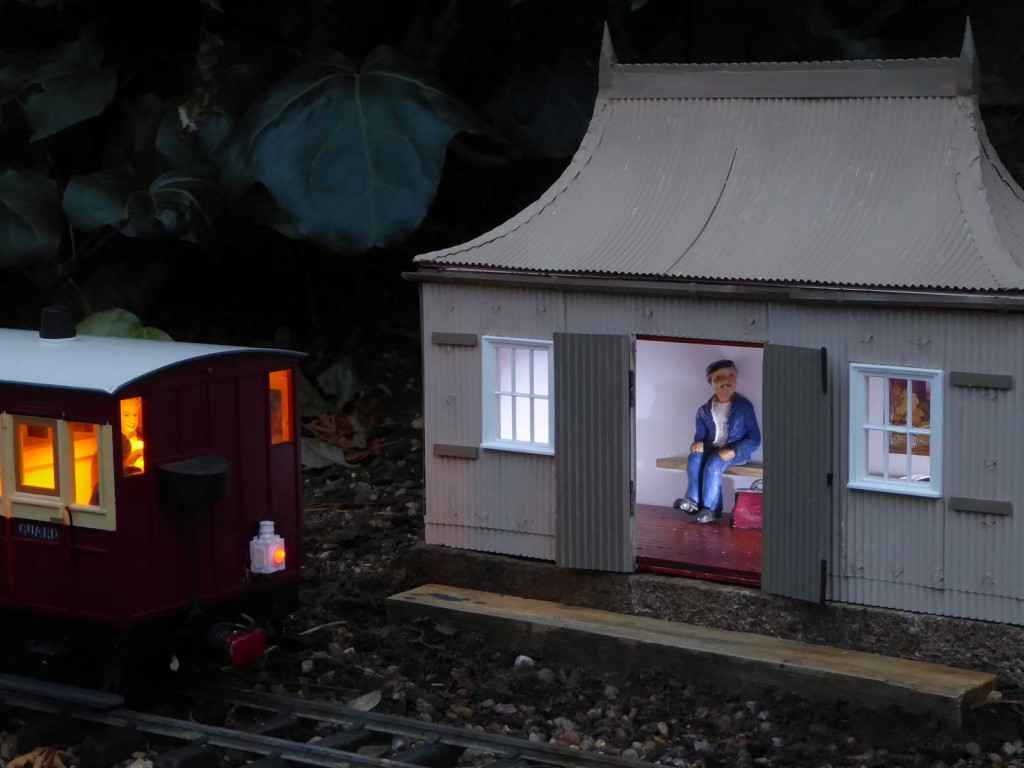 The Mk. 2 pagoda features a few changes from Mk1. It’s a bit longer so it more closely resembles the original at Didcot (with space for notices beside the windows). I had to change the way I made the guttering too. Simply bending it into a U is hard to do without banana-ing, so now I’m experimenting with scoring it several times longways, which causes it to bend quite precisely into a half hexagon profile, which might be mistaken for the work of an obscure and long forgotten manufacturer. 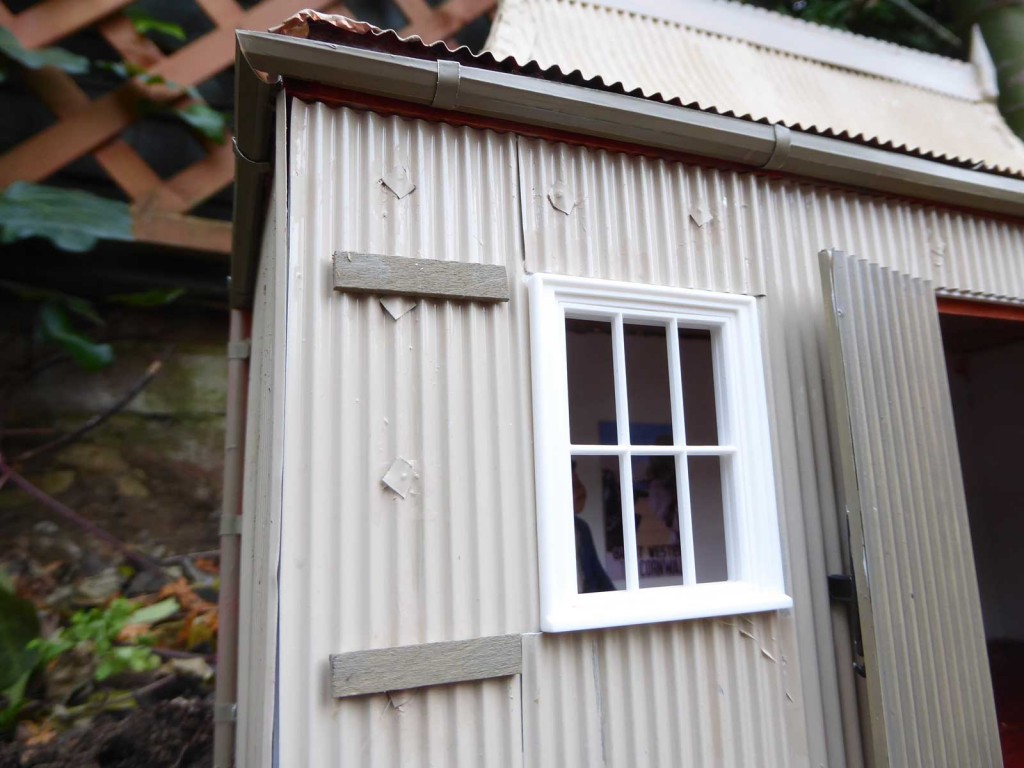 Corner detail on the Mk 2 pagoda