I’ve always like narrow gauge and this engine caught my attention when I rode behind it on the Froissy-Cappy-Dompierre line in France (the engine has since moved on from this location). 100 were built in the USA in 1917 for the British Army in France. I had seen the plans for this type on the 16mm Association web-site, so thought “let’s go for it”.

I was about three days into the start when I realised there was not enough information to continue, so I borrowed Christian Cenac’s excellent book of drawings “60cm Gauge Railways of WW1 In France” from the Narrow Gauge Railway Society. Superb drawings (all in 1/35th scale so re-scaled them on the computer) of the Alco, Baldwin and Kerr Stuart engines. Now I could “crack on”. 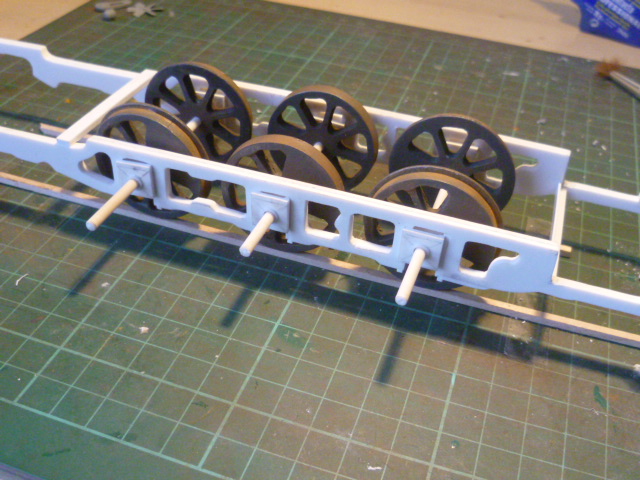 Frames and wheels under construction

The frames were made from laminating 2 pieces of 80thou styrene sheet, gluing the correct sized drawing of the frames onto them then cutting out with a fretsaw, finishing with needle files. The driving wheels posed a problem as no-one did them the right size or style. A local modeller here on the Isle of Wight had a 3D printer so I gave him a wheel drawing (again from the book correctly scaled up) and “voila” there were the drivers – ready to install with a bit of cleaning up and the flange removed from the centre drivers. 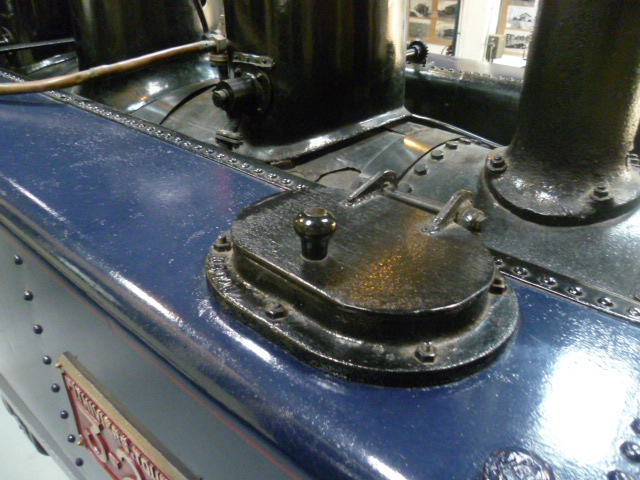 Tank and boiler-top detail on the loco at Pithiviers 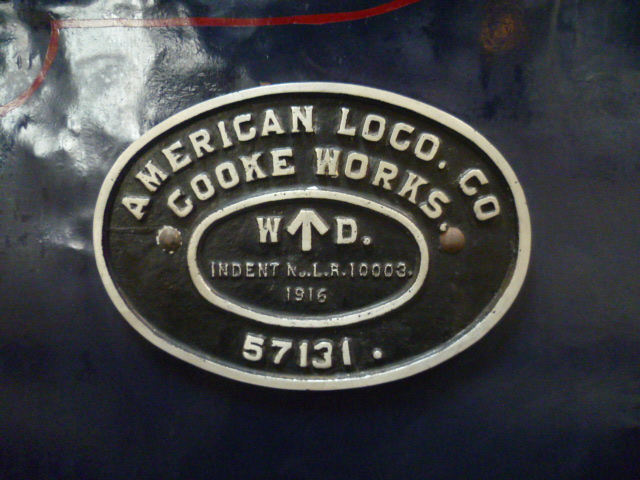 Works plate detail on the loco at Pithiviers

A trip to a preserved Alco in Pithiviers in France for photos and measuring up helped sort out further detail not obvious from the drawings. To the frames/driving wheels were added all the motion detail fabricated in styrene, rivet and bolt detail (using Grandt Line rivets and nuts, bolts & washers), the cylinders and modified wagon wheels for the trailing wheels. The cylinder ends were made by roughly cutting the disc shape then “spinning” them in a small drill whilst sanding to the correct size and profile (wife not too happy about the plastic shavings on the carpet!). 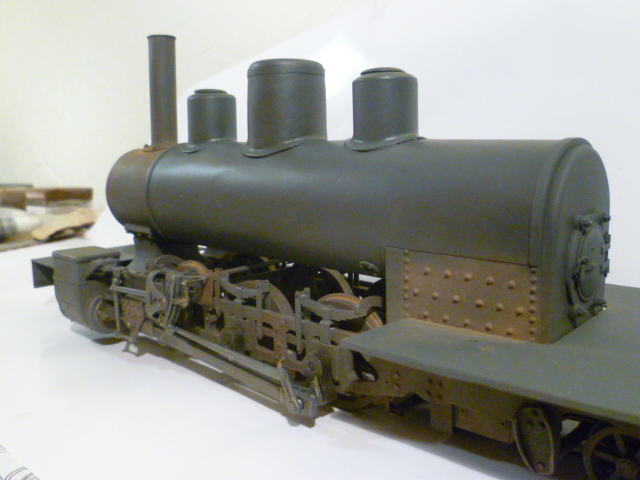 The basis of the boiler is acrylic tubing wrapped with styrene to the correct diameter. The smokebox front and door were again turned on the drill, the sand domes and steam dome were short lengths of plastic waste pipe wrapped in styrene to the right diameter, a “lip” added to the base of each then filler added and sanded to represent the cover bases. The firebox was built up using sheet styrene with lots of Grandt Line and Cambrian Models rivets. The chimney was simply plastic tube with a rim added at the top, the lip at the bottom made the same way at the dome bases with filler and sanded. 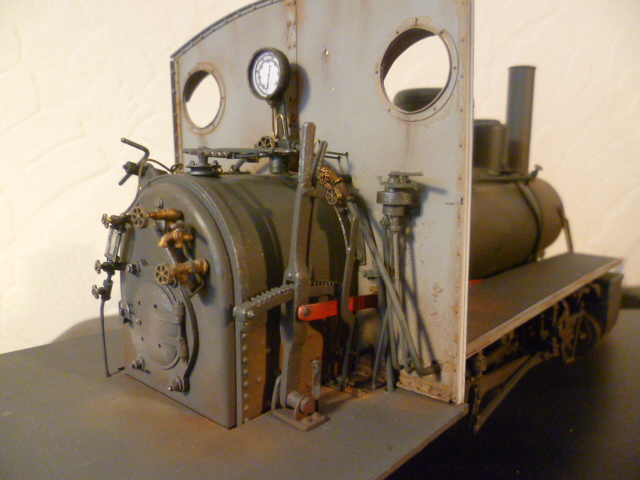 After fitting the boiler/firebox assembly on the frames I moved on to the cab detail. The “rack” on the reverser was made by gluing together very short sections of “L” angle styrene, making a sort of “LLLLLLL”, then sanded to the correct width. This ensured even spacing and height. The valve wheels were brass from Trackside Details in the States, plus some Cambrian Models ones. I found a pressure gauge drawing on the web and just printed off at the right size and glued it into a disc. Other parts were primarily scratch built from styrene.

The water tanks being fairly “chunky” items were 20thou styrene wrapped around a sturdy styrene “box” with the corners sanded to a curve and Grandt Line rivets added (and there were a lot of them!). The tank fillers were fabricated from bits of styrene and the while lot sprayed light grey. This was the livery used on these engines after hostilities finished in 1918 and they were used to move rubble from the devastated towns and villages and bring in bricks, timber and other materials for reconstruction. 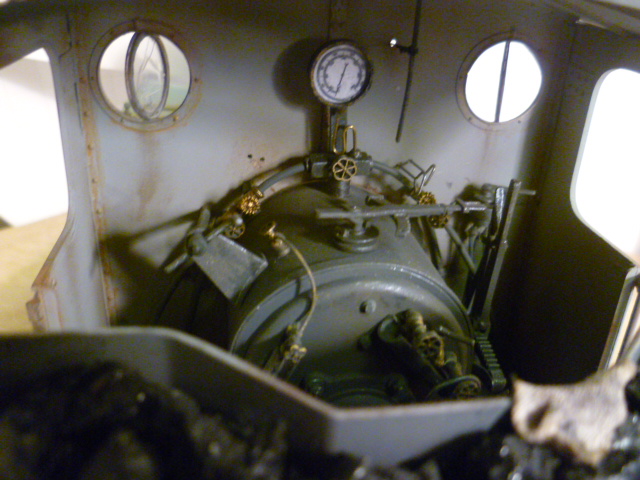 Another view of the cab

Finally the cab itself was made, again with numerous rivets added. The spectacle windows are real glass, one cracked being installed but looks very effective. Extra pipe work added under the cab, number and works plates obtained from Narrow Planet (they offer a number of builders plates in a variety of scales) , final weathering put on (again the Bragdon powders) real coal put in the bunker and some rags and oil cans added for interest. 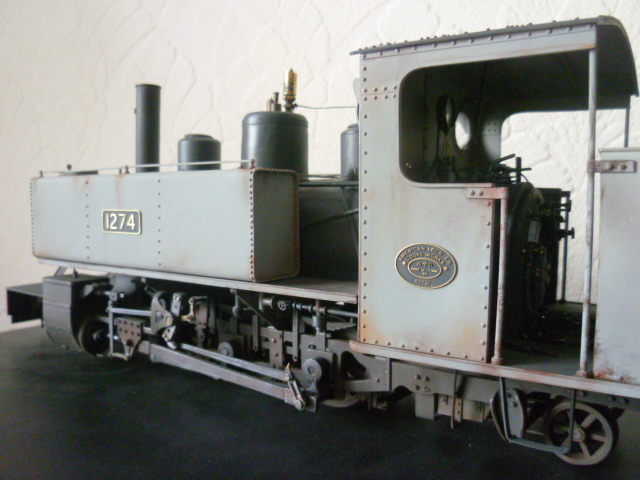 It’s the first time I’ve tried 16mm scale – normally I have worked in 1/35 – and thoroughly enjoyed it, so much so I am now building in 16mm a 3ft gauge Byers geared locomotive (only five built in the USA between 1896 and 1906) – a really weird engine with vertical cylinders and quite a challenge. 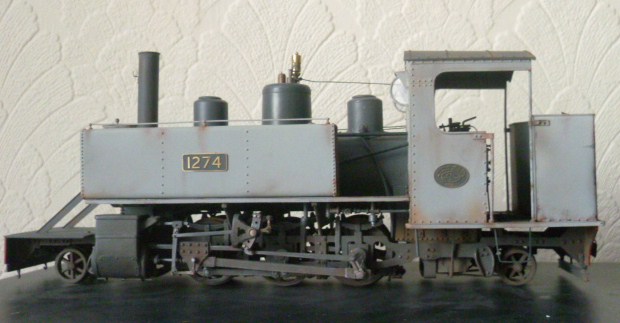 Side view of the finished model