The prototype was used on the British Aluminium Company’s Upper Works Railway, serving the intakes for the water pipeline supplying water to the hydroelectric scheme which powered the Fort William aluminium works. The wagon chassis dated from ~1929 and was one of a number supplied by W G Bagnall at this time. The tipper was a later addition fitted in 1969 and hydraulically powered.

A couple of prototype photos by John Rossetti can be found on Alan Mitchell’s “On and Off the Beaten Track” photo site:

Having made some Red Star Steam Packet Co. kits of the rolling stock used on the 3 foot gauge Lochaber narrow gauge system at the various stages in its life, I had been planning on branching out to making myself some of the one-off designs constructed using the bare chassis as a base. This wagon chassis was assembled in 2018 but as ever other things get in the way, and so it sat unpainted as a basic flat wagon until the coronavirus lockdown – with college closed and all lectures online this meant returning home, which also meant time to get back to tinkering with 16mm.

Brake gear was first fitted to the chassis – mostly spare parts from previous kits or scrounged from the spare parts tin. With the chassis essentially complete, it was given a couple of coats of a mix of Humbrol No. 29 and Humbrol No. 100 to give a rusty brown colour – in colour pictures of the prototype, the chassis appears to have almost no paint at all left on it.

A card mock-up of the tipper bucket had been made in 2018, and so this was used as a rough template for the plasticard version, though reduced to a size that better fitted the wagon as per images of the prototype. (Thanks are due to Alan Mitchell, whose Zenfolio site has excellent pictures of the trackbed in the present day, and additionally has some colour pictures from the early 1970s of the stock shortly after closure.)

Looking at the card mock-up I wasn’t quite happy with the shape of it, so decided to use it as a rough template, altering the width and shape of parts a little. 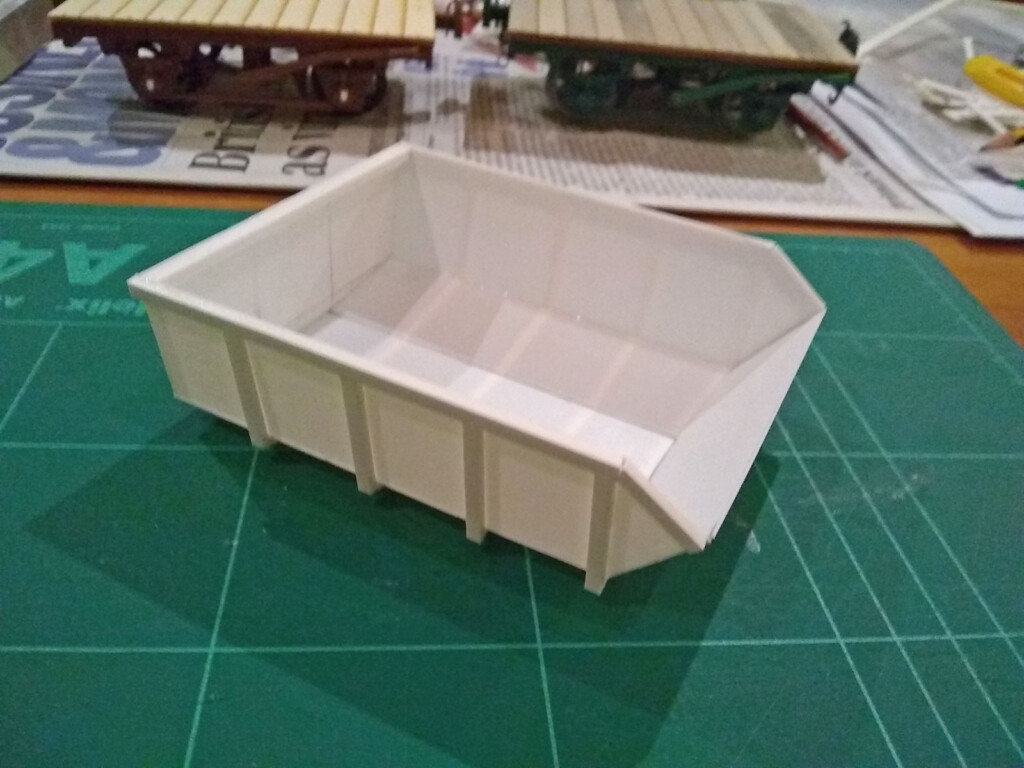 The sides and rear were the first parts cut out in plastic with the underside following – these all had to be assembled so I could use the assembly to mark out the shape of the front sheet of the bucket as it was a bit of an awkward shape. When I came to fix on the external framework I then realised that I had glued the sides upside down! – oh well, it’s annoying, but I can live with that, and it’s not like anyone would have noticed until I mentioned it. Some Milliput was used around the front end to fill in the gaps: it wasn’t a neat job, but shouldn’t be obvious with a load in it. 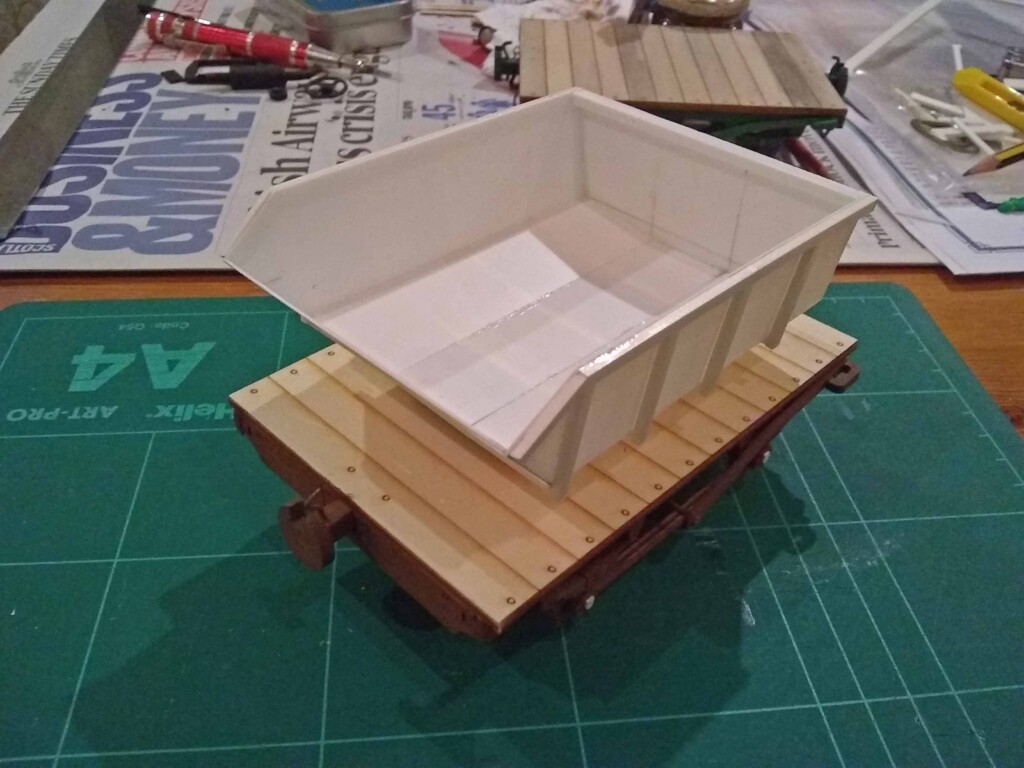 With the tipper body complete, attention then turned to making a working method so it could tip. What I like about 16mm is that everything is just big enough so it can work just like, or similar to, the real thing. 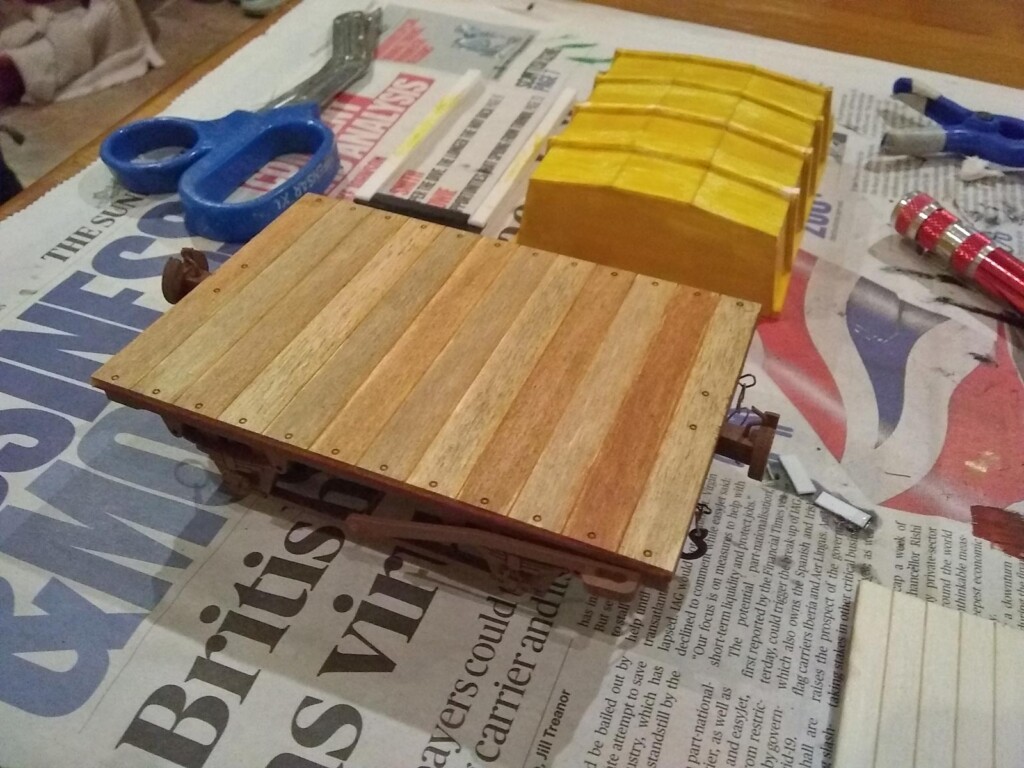 A scrap of plastic tubing and some offcuts of thick plastic were sourced from the scrap tin to fit underneath the bucket.

The frame fitted to the floor of the wagon was again made up of plastic sheet, layered to build up some height, and at the front were fitted two scrap pieces with a 2mm hole drilled through. Through these was then placed the rod from an aluminium pop rivet, which also fitted through the piece of plastic tubing underneath the bucket. Satisfied with this, a small dab of super glue was applied at each end to secure. A rest for the rear of the bucket was then cut to shape and fitted to the frame.

The prototype bucket was painted yellow so a tin of Humbrol No 24 was used for this – the paint was still tacky the following day despite extensive mixing before use, and based on when I bought this tin it might have been part of a dodgy batch. Tins I have bought more recently such as those for the chassis have no issues. Leaving it to sit in the sun for a day sorted it out, and with hindsight I should maybe have used a spray primer beforehand. 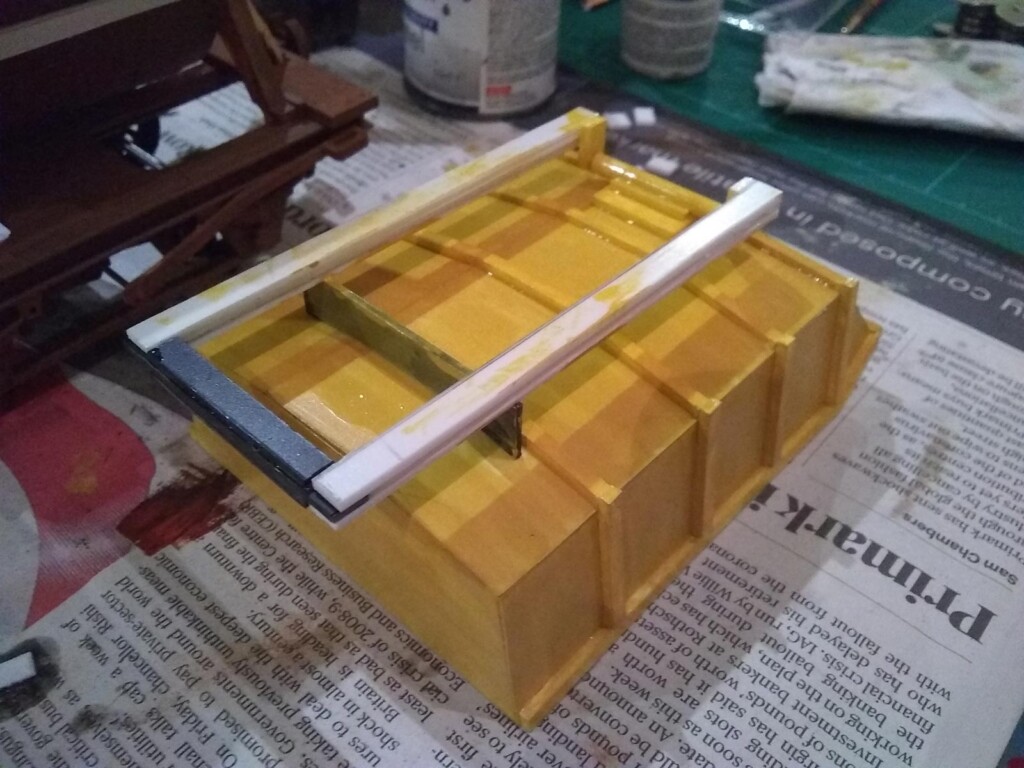 With this painted and fitted, that was the wagon essentially complete, the only part to finish being the hydraulic cylinder at the rear of the bucket. My original plan was to utilise a narrow syringe and try and use a pneumatic type system to operate the tipper – experiments with this were somewhat fruitless, and so it was decided to make it a purely visual part; tipping would need to be done by hand.  A piece of acrylic tubing (to represent the hydraulic cylinder) of a diameter that looked right was selected and cut to a length that looked right – very much all bodged by eye here.  A hole was drilled in the wagon floor, just ahead of the frame, for this to fit in to.  A small scrap of plastic was cut and drilled to size to provide a bracket to connect the tube to the frame, in order to give it additional support.  Happy with this, the parts were then glued together then a coat of paint applied around the bottom.  When the paint had dried, the hydraulic cylinder was glued in position and then later on painted with a few more coats of paint. 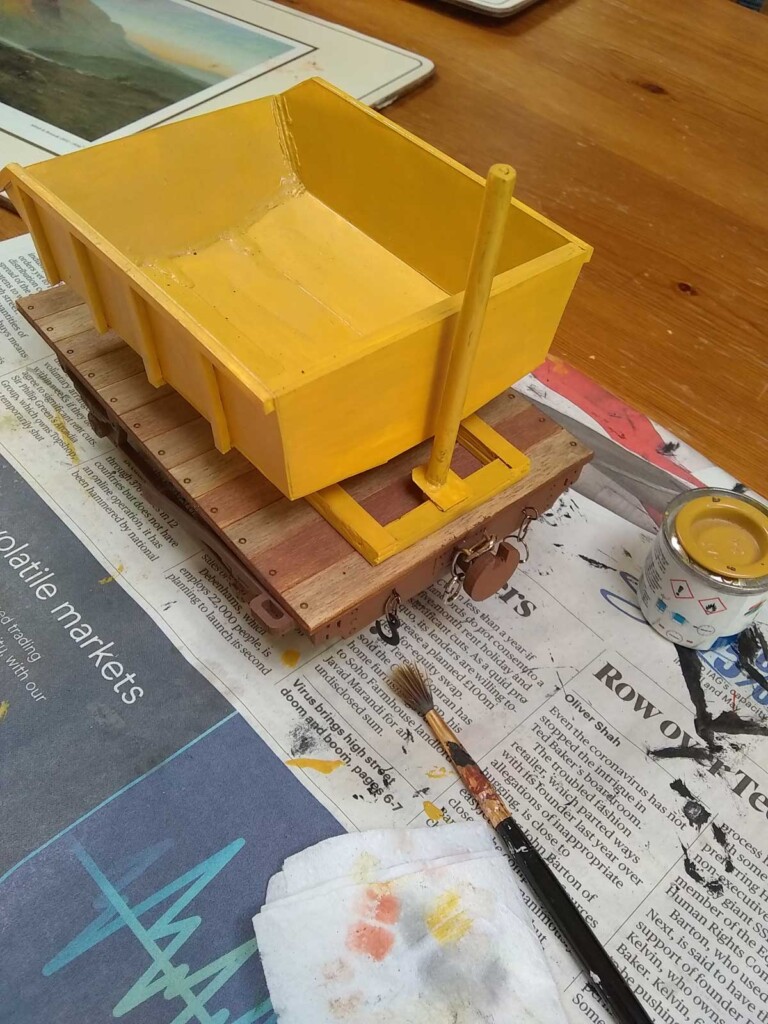 Overall I’m pleased with how this turned out, though I feel it does look somewhat squat when compared to pictures of the original and the paint job isn’t the greatest – hopefully a bit of weathering and some use will hide this. Fortunately there was another similar tipper wagon to this on the prototype railway, so the lessons learnt with this wagon will be used when building it.  It does however look the part with an IP diesel loco built in the style of a Lochaber loco, and that’s the important thing in my view.