I am a relative newcomer to the 16mm scale world.  Since dismantling my ’00’-gauge layout 40 years ago (it had almost a scale mile of track!), most of my modelling time has been spent building boats.  When ill-health forced a rethink of my regular handling and launching of often heavy boats, I returned to my old love of trains.  16mm scale appealed as I could keep scratch-building, and the larger size meant that the models were not too fiddly. Most model trains are also much easier than a boat to run and pick up! Over the last couple of years, I have built up a garden line and made kits or scratch-built both locos and rolling stock.

In preparation for a proposed extension to my garden line, my latest project has been to convert a PDF Models ‘Dolgoch’ loco kit into a crane tank!  Narrow gauge crane tanks were never very common but I am known for closely following ‘rule 1’ – it’s my railway and I will run what I want!

Initial assembly followed the well-laid out kit instructions with the standard preparation of the 3D-printed parts, using filler and sanding, going well.  The frames and superstructure made a solid unit.  Meanwhile I constructed the crane jib from plastikard and added extra gear wheels, hand wheels, rivet details and hook & chain from the bits box.  The crane jib is mounted on a brass gear wheel, again found in the bits box!

To help give the loco an individual look, side tanks and a rear coal bunker were made up from plastikard and positioned on the frames.  This was also to help hide a standard sail-winch servo (from a model yacht) which was placed in between the frames. This servo allows the crane to rotate 3600. Other detailing parts such as domes, pipes and whistle were re-positioned from the original design.  Halfords acrylic ‘rattle-can’ paint was sprayed on before BECC lettering was applied.  Some light weathering using standard powers and washes finished off the loco. 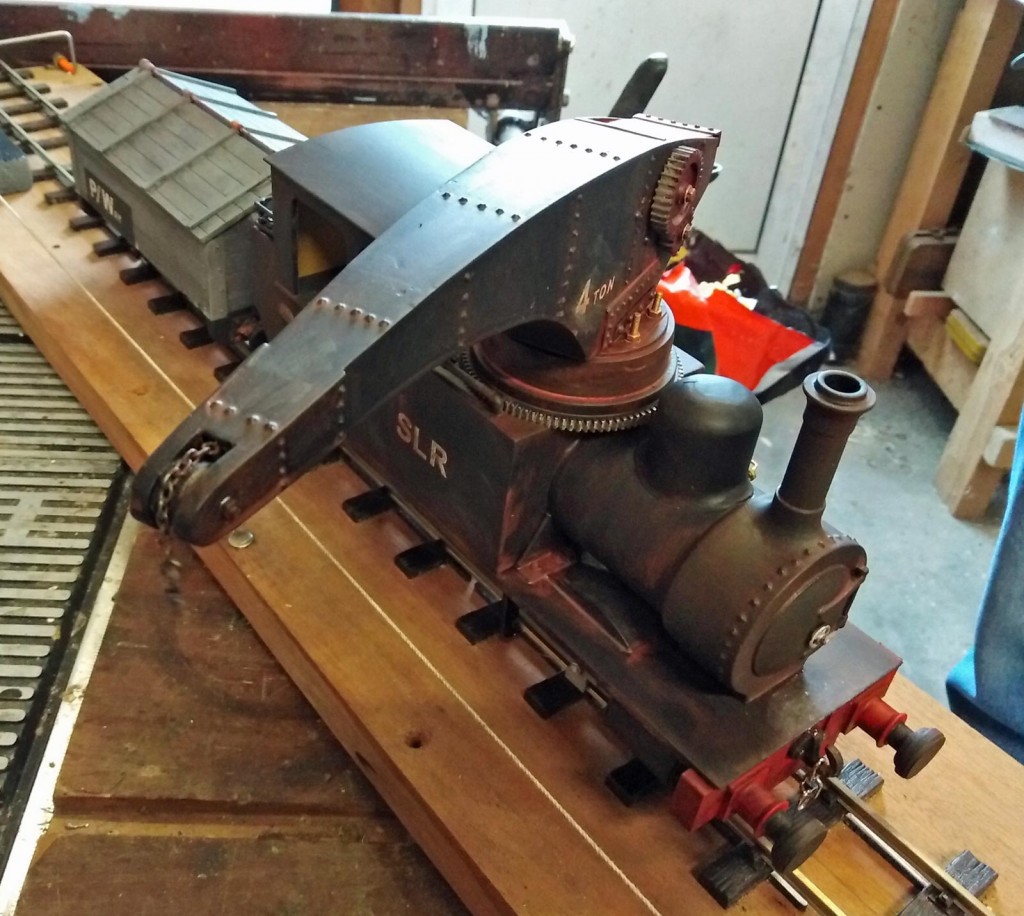 The wagon is a standard Bole Laser Craft PWD Tool Wagon, with added buffers on the loco end.  It contains the loco’s electronic speed controller, receiver and batteries, so is semi-permanently coupled.

With a crane tank engine to help me and warmer weather on the way, I really have no excuse now not to progress building the railway extension!