I was doing some poking around on t’internet on the disc signals during the closing stages of completing the Roundhouse disc signal kit.  It seemed that some odd little creatures called ‘capstans’ were intimately associated with this type of signalling system. A few photos existed courtesy of the Festrail and Festipedia websites and piqued my interest.  It seems the capstans were the ‘handraulic’ operating stations for the big signal… in the days before such niceties as signal boxes. The system was simple: the capstan as its called does indeed have a (wire) rope passing around a pulley in its base which, when turned operated the signal some distance away. The wire system being a push-pull mechanism. In fact, at both signal and capstan pulleys, the wire rope was attached to chains that passed around the pulleys and were positively located to them. 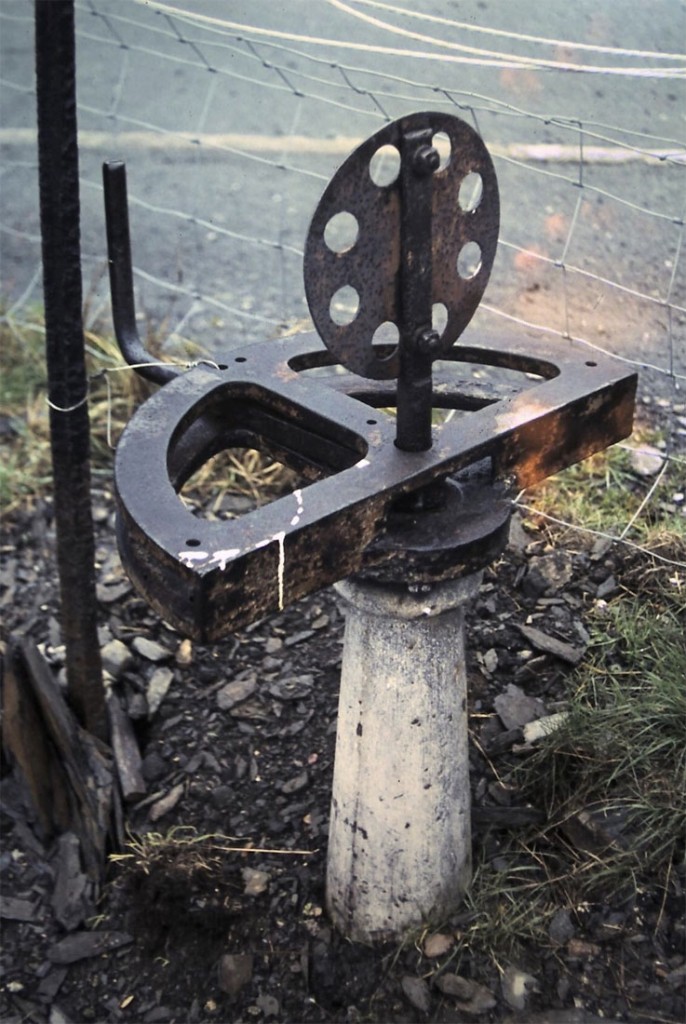 I had the big signal, now what about its little brother? Aas soon as I’d finished the big ‘un, I started on the baby. I should note here that I didn’t scale or measure anything. It’s all ‘modeller’s eye’ and conforms to the “if it looks right, then it probably is” approach. 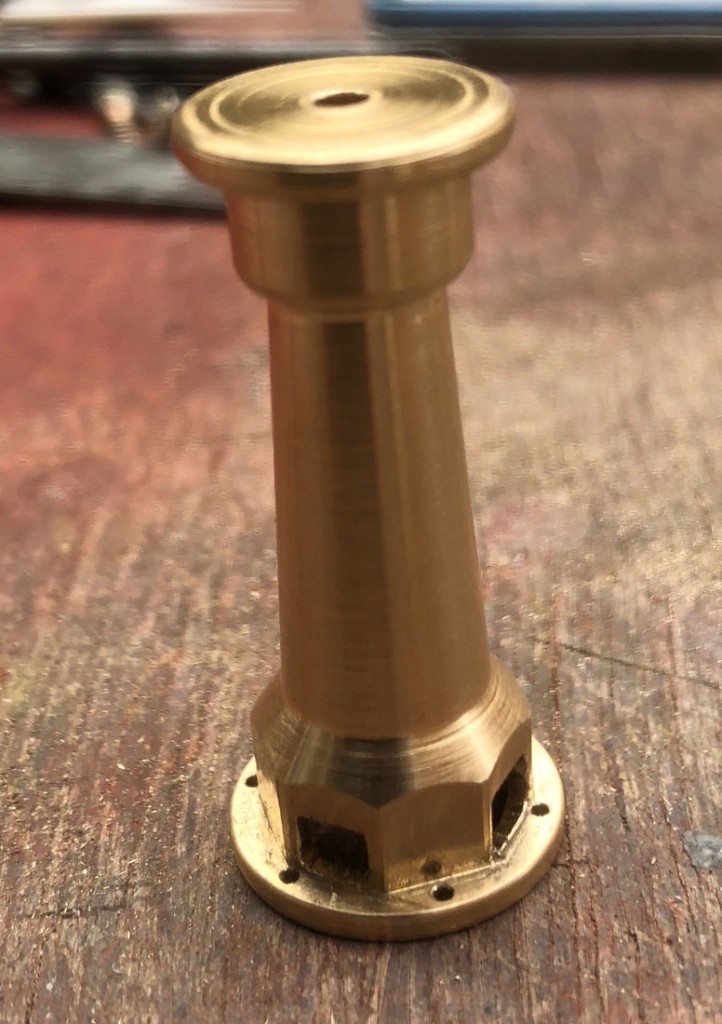 First job was the stanchion. Find piece of brass bar about the right size and start making swarf. In practice the first turning ops were all about the stanchion base, which is octagonal with a flanged base, so needed milling. Rough positions of stanchion features were approximated for the time being with a parting tool.  Once the octagonal form had been done, I should have drilled four faces of the octagon and did drill the six flange bolt holes. Thereafter, it was a load more swarf-making and boring out (and boring through) the base. I did include a feature at the top of the stanchion, which after more picture-gazing probably isn’t there, but what the heck… A bit of Dremel-ing and filing was needed to create the square ‘windows’ in the octagonal base.

Once the base was done, it was time for the ‘angels wings’ (my nickname for the semi-circular quadrant – it just reminds me of a Christmas tree angel decoration for some reason). I thought about brass, but didn’t have anything suitable, so opted for 2mm styrene sheet. As it turned out, just as well …!

The upper and lower parts were marked out and internal corner points were drilled. Using the pivot hole, the two sheets were glued together… but only in places that would be cut away. The styrene was then screwed to a piece of wood clamped to a face plate, ready for some rotary milling action. The external and internal D-forms went to plan, but in a moment of over confidence right at the end, I took too much off the central spoke. Grrrr… The good thing about styrene is that you can easily glue material back on, which is how I fixed it. 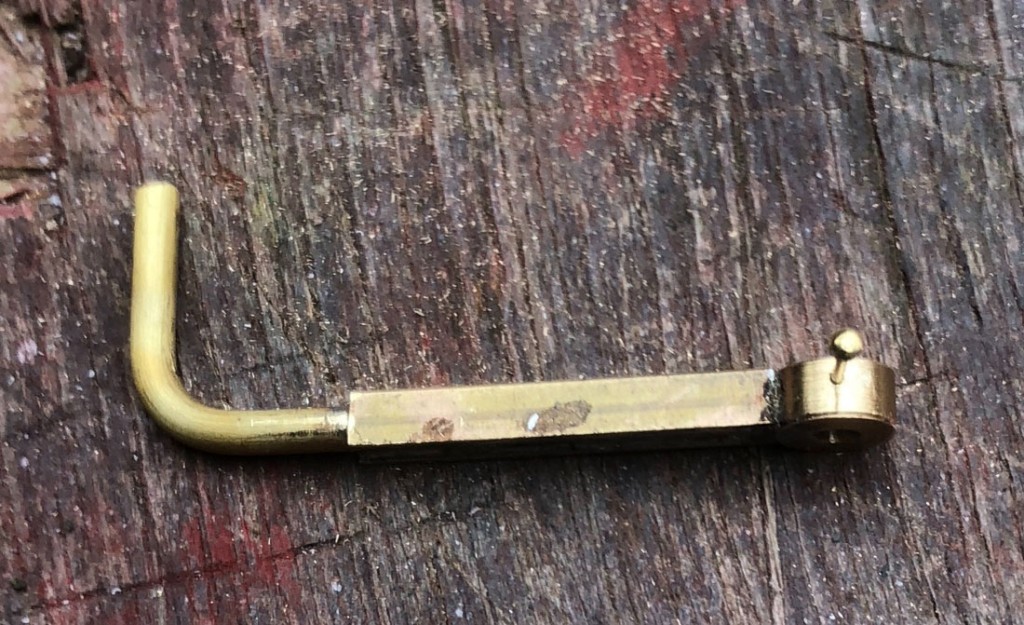 Having done the angel wings, I needed to make the operating handle, which was comprised of a brass bush, a bent bit of brass rod and a bit of brass channel. I realised I’d had the latter since the 1980s! Well, you never know when it’ll come in handy, eh? All soft soldered together. 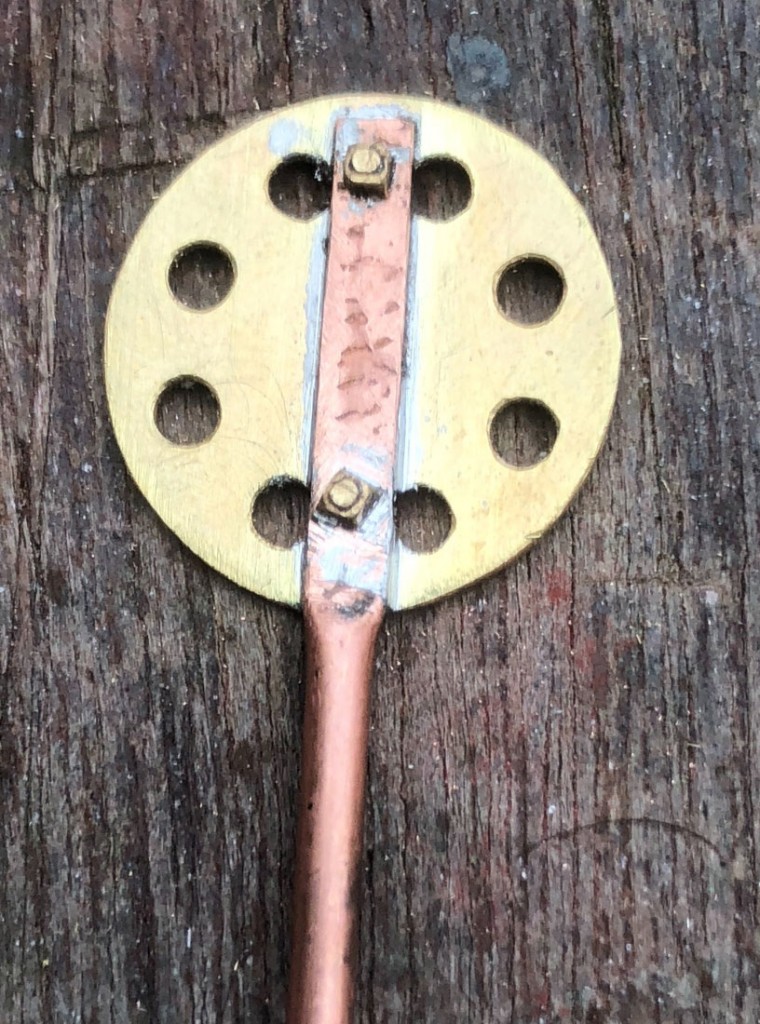 The disc was another dividing job in the lathe, followed by rotary milling out of the sheet. The main spindle was 3/32” copper tube, flattened at the top and with a couple of Slaters fake nuts that were all soldered to the disc.

Once that was done, I could now get the spacing for the angel wings and complete the styrene assembly. But before that, I drilled a 0.6mm timing hole in the lower quadrant and stanchion. I’ve included a photo of all the components laid out, before I then got on to painting and assembly. 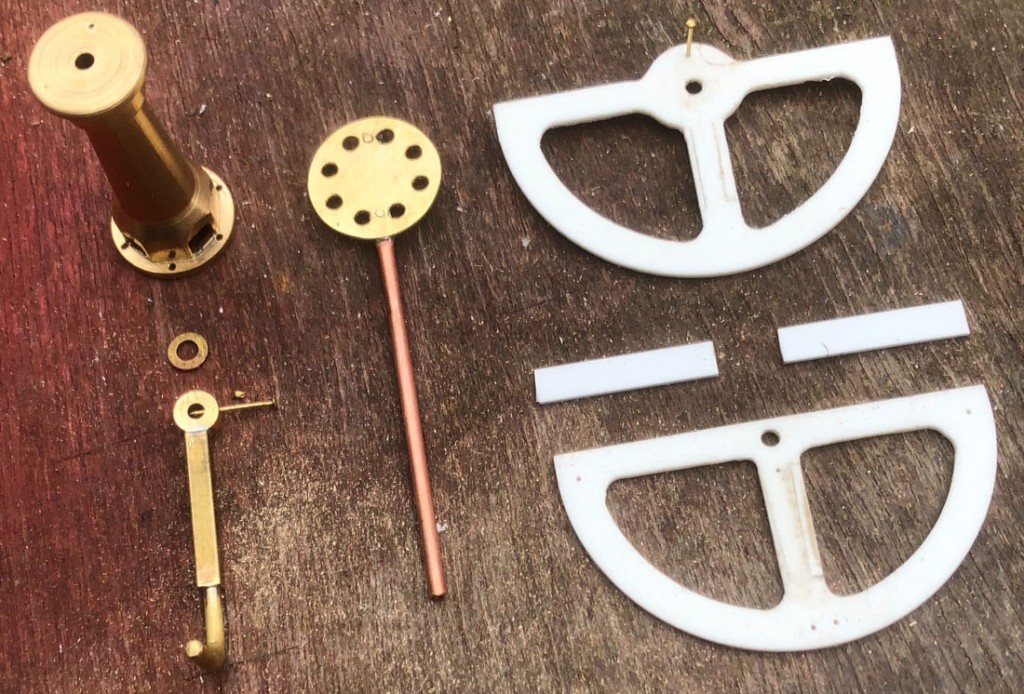 You might notice a pin in the operating handle bush.  This could have been a small grub screw, but I couldn’t find an M2, so a pin it was.

Next photo is of all the parts painted… and the observant will have noted that a pulley has appeared. It reality, this will be barely noticeable, hidden as it will be within the stanchion base. 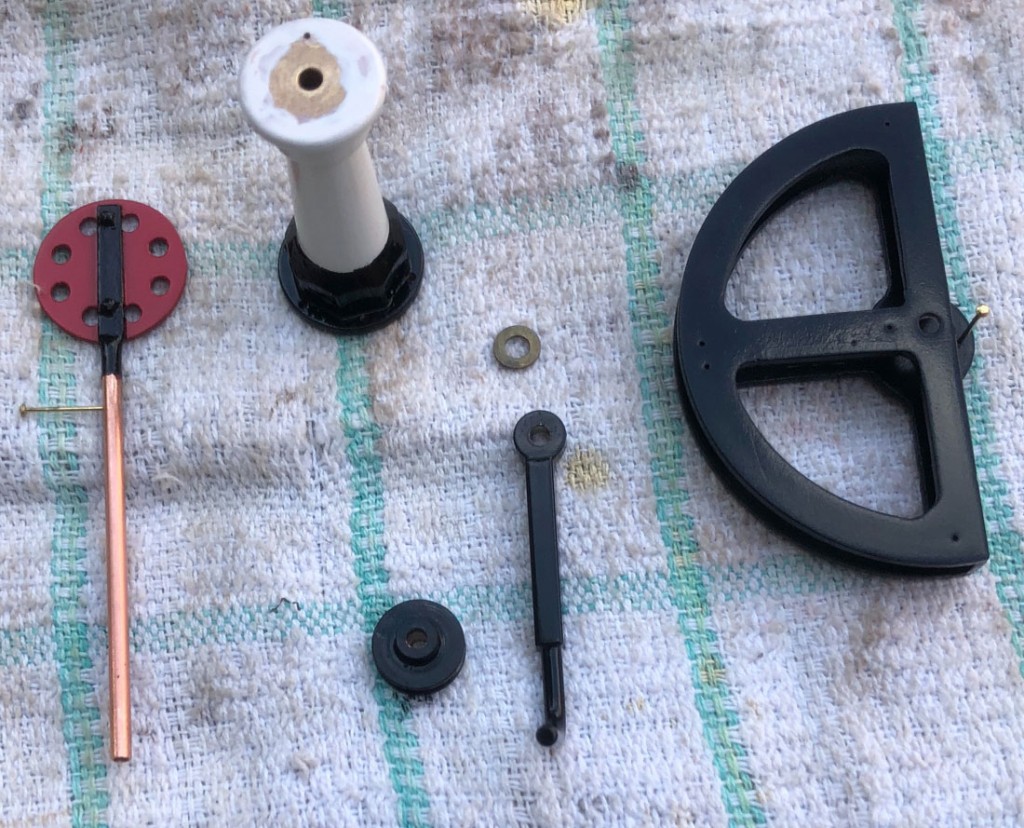 The brass washer goes on top of the handle bush. Paint is a combination of Halfords rattle cans and Tamiya acrylics.

Some research showed a locking pin on a chain, so I made one of those too: 0.5mm brass wire, gold chain and some really fiddly filing and drilling of 1/8” brass rod.  So now the end result… 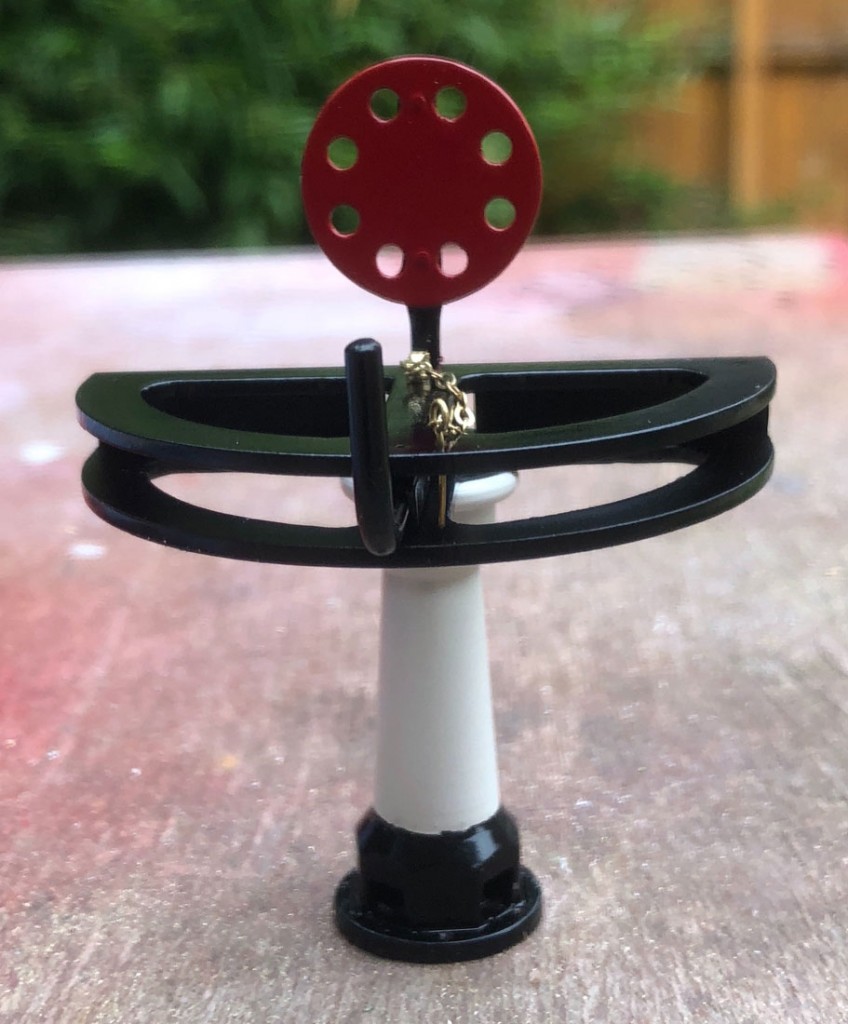 And it operates. The pulley was just fitted to the spindle with Loctite thread lock.

These things pop up on the Ffestiniog in various places; some trackside and some are shown as having been on the platforms at Minffordd.

This would make a nice little project: dinky, simple and complimentary to the Roundhouse signal kit.