One problem I’d got with my micro-layout, Slug’s Crossing, was that it’s got a site toilet on it. When you disobey the large label that says “Do NOT under ANY circumstances WHATSOEVER push this button”, the door opens, revealing the occupant, before the door slams shut. The only problem was that I’d started off with the batteries to operate all the electronics under the layout, but the heavy battery box came undone, and the weight of the 4 AA batteries pulled the wires out of the connector block.

A quick trip to Timperley sorted the wiring out and the battery box was re-sited on top of the baseboard, but how to hide it? However, salvation was at hand in the shape of Phil Sharples, who had introduced a model of a 6′ x 4′ garden shed at the Yorkshire Show in September, for the bargain price of eight of your Earth pounds. I just had to have one, as an inspiration struck me: one of these would hide the batteries for the toilet on Slug’s Crossing in plain view on top of the baseboard. 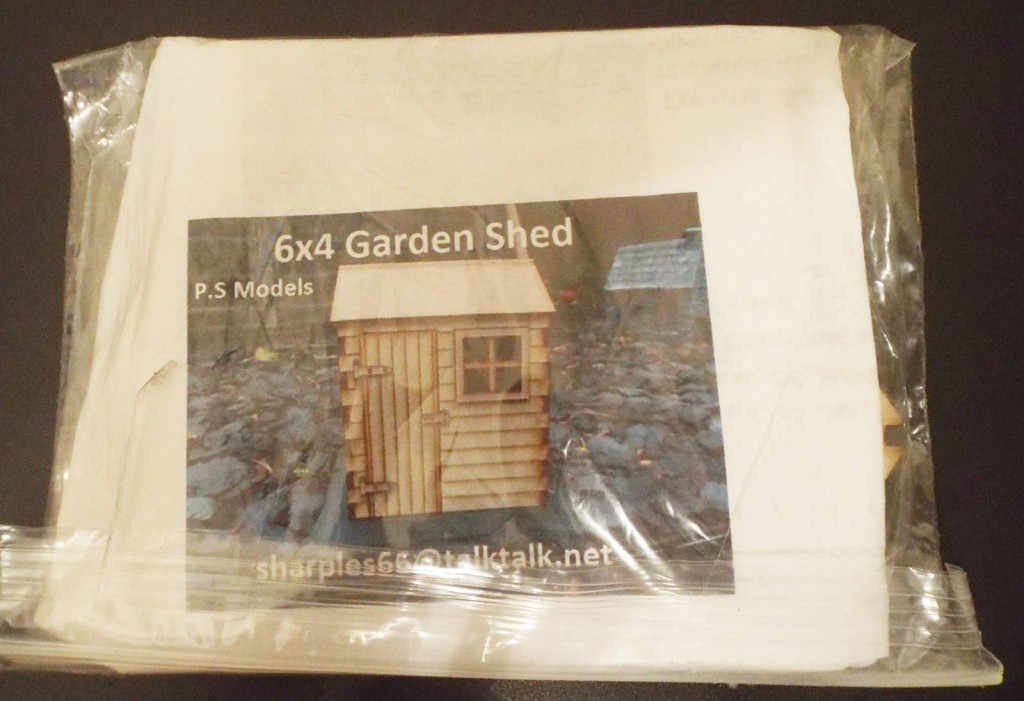 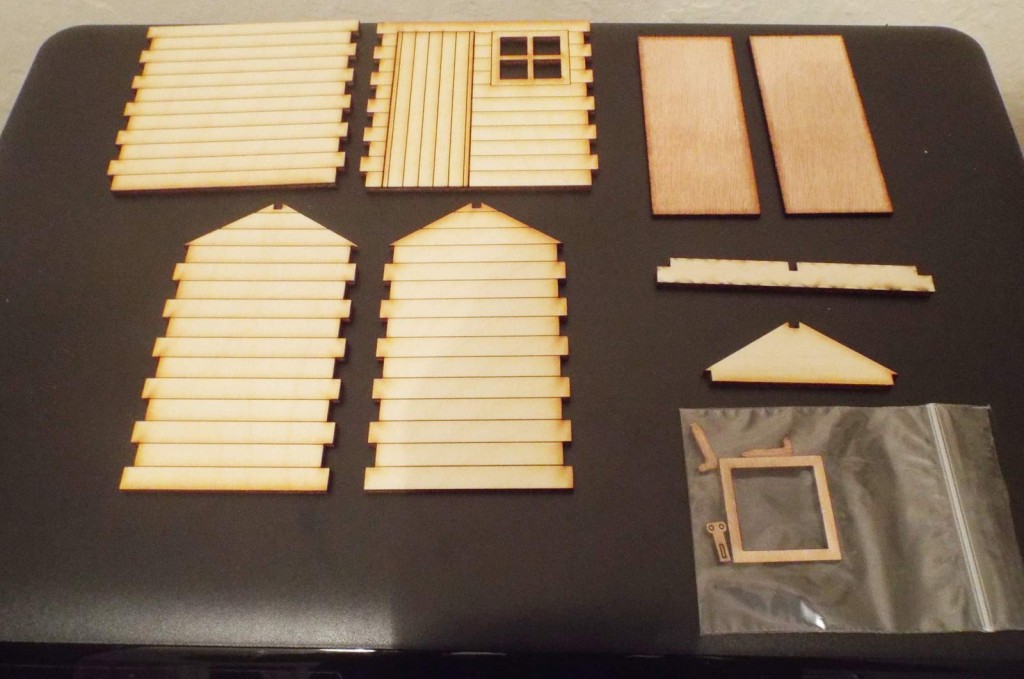 I built the shed in spasms during a day filled with normal, more mundane, things (like vacuuming the house).

The first thing I wanted to do was sand the ends of the main parts, so the joints wouldn’t show up as much. 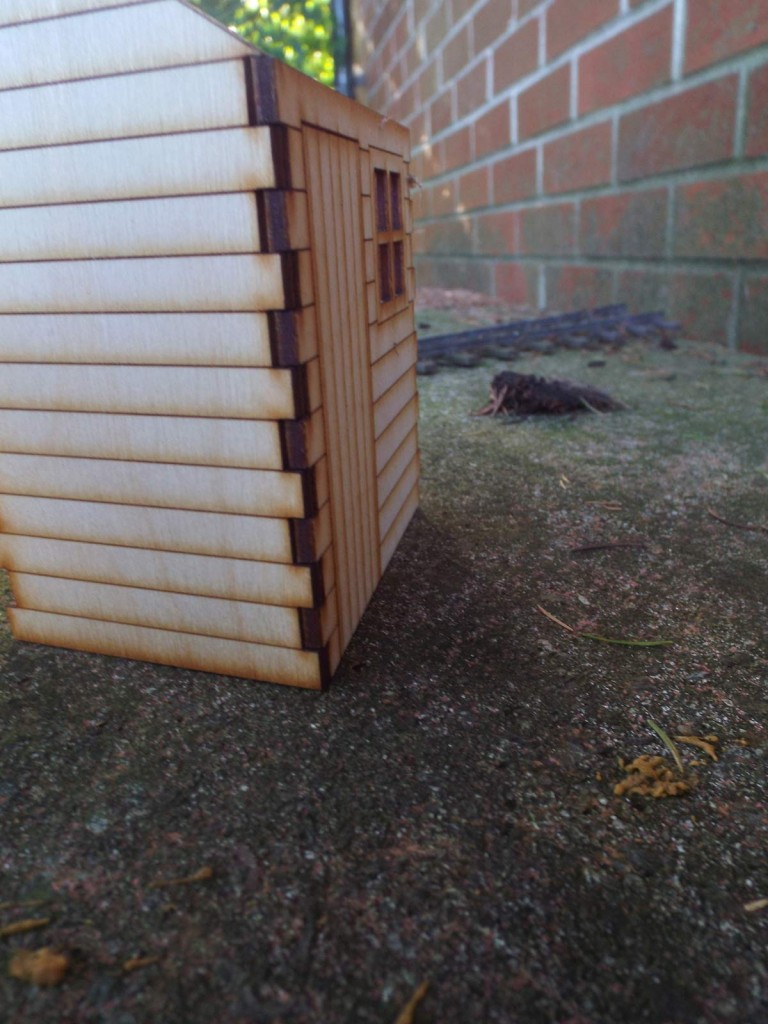 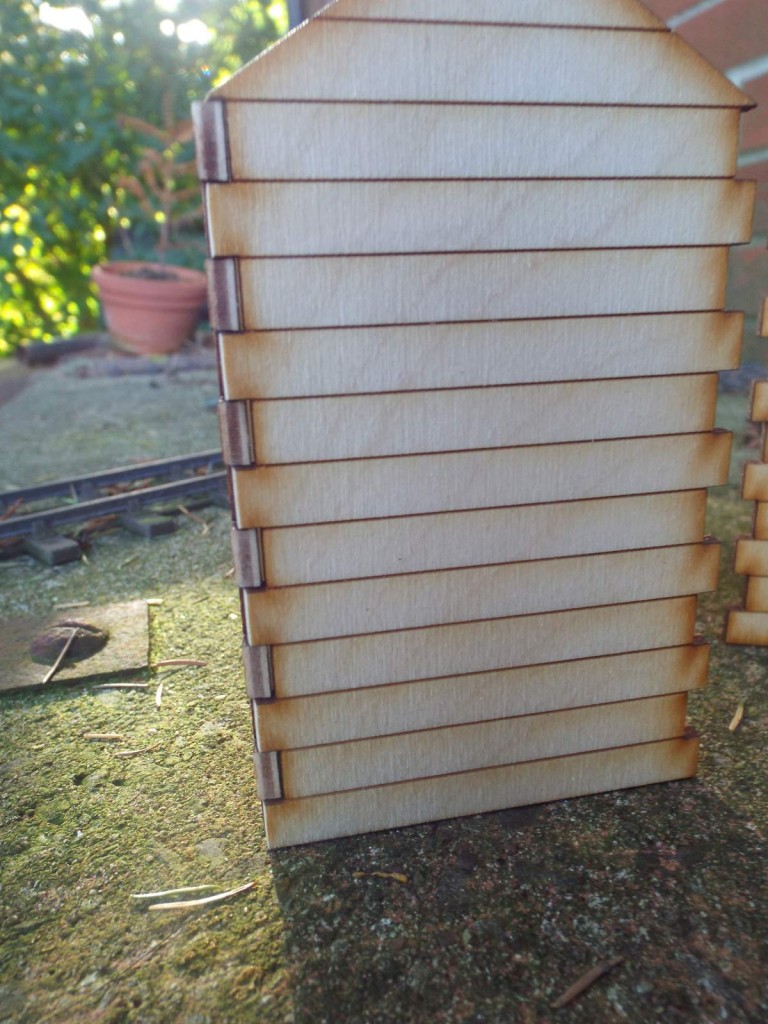 … and with the ends sanded.

Imagine my joy when I discovered that unlike lots of his kits, this one was cut from Real Plywood™, not MDF. This was going to make finishing the model much easier, so I turned to my palette of wood dyes (I keep [pause whilst he runs trundles down to the shed to check] 8 in stock) and selected Jacobean Dark Oak for the roof panels, Light Oak for the window and door, and American Walnut for the rest.

Before applying these, I showed the outside faces to the sander, just to remove the brown scars left by the laser cutting process. The parts were stained, the hinges and lock were stuck to a length of wood and had a Matt Black rattle can pointed at them, and all was left to dry. 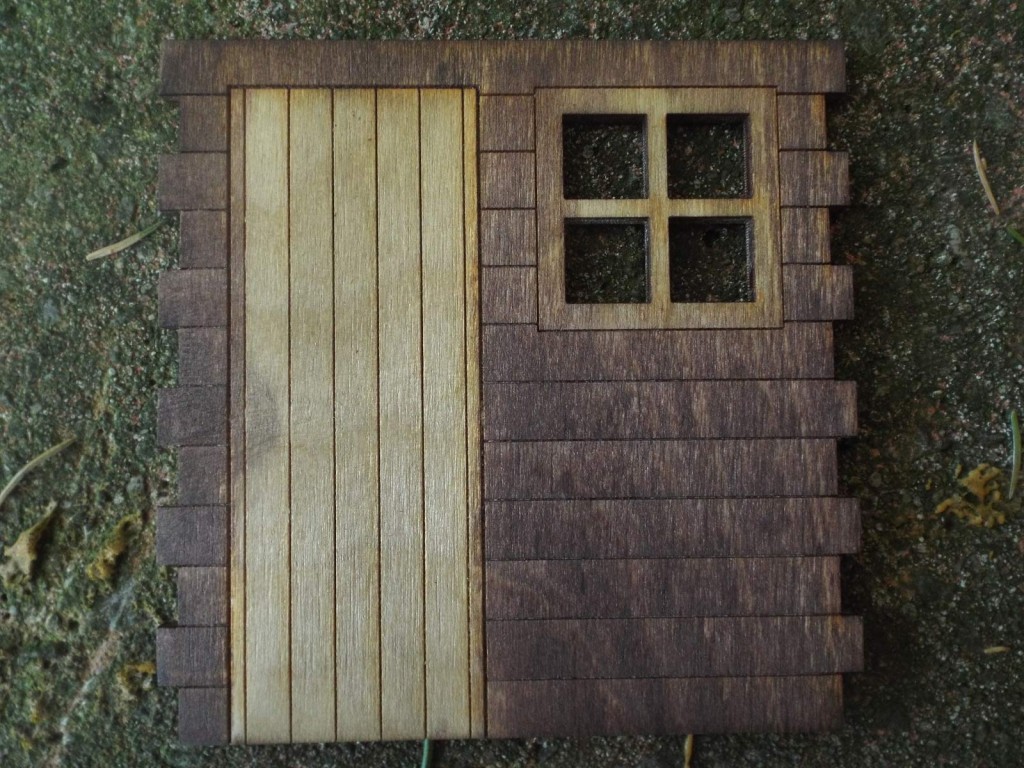 The front stained up.

Later in the day (and once I’d photographed the front and written up Spasm the First) I assembled the kit, using PVA glue. Putting the first two or three sides together was a little tricky, but once I added the intermediate roof truss and ridge piece assembly, which is a good tight fit in the ends, the whole thing became much more stable and less likely to fall apart into its components. Fortunately, I keep in stock a plentiful supply of ex-General Post Office rubber bands, which are plentifully distributed on our road (and in the car park of a local pub where the posties park their cars during the working day) so it was a simple matter to truss the whole hut up, rather like a Christmas turkey (only better). 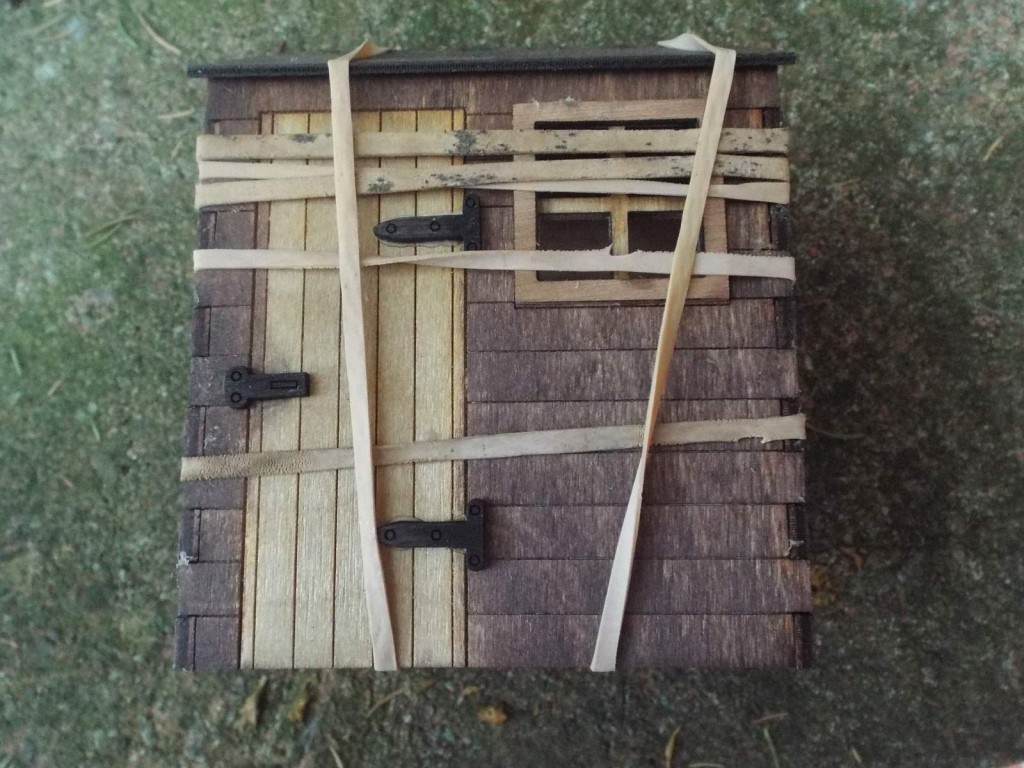 As the rubber bands went across the window, it proved possible to use them to hold the frame surround in place: the hinges and lock were so light they stopped in place anyway. The one thing Phil doesn’t supply was some glazing material for the window, but I carry stock anyway and a piece was sourced to be added when the glue had gone off. 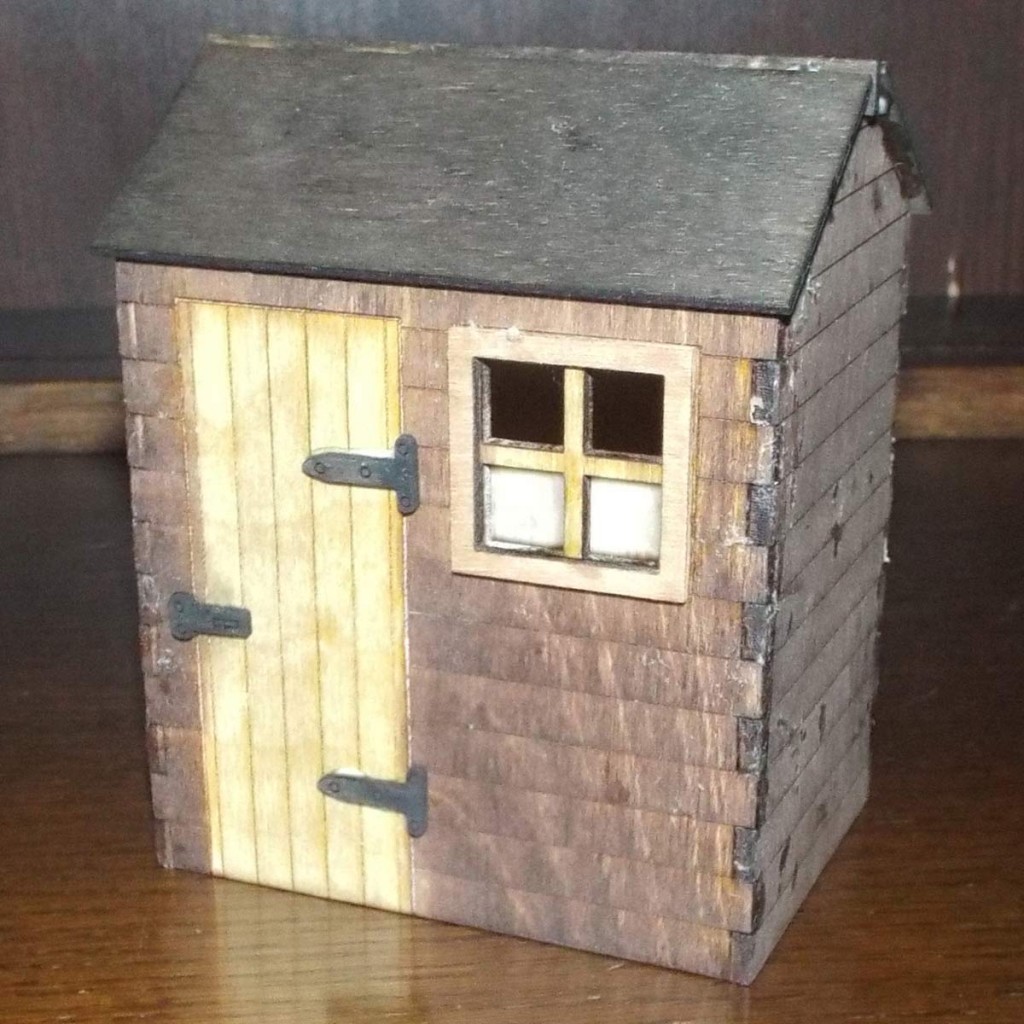 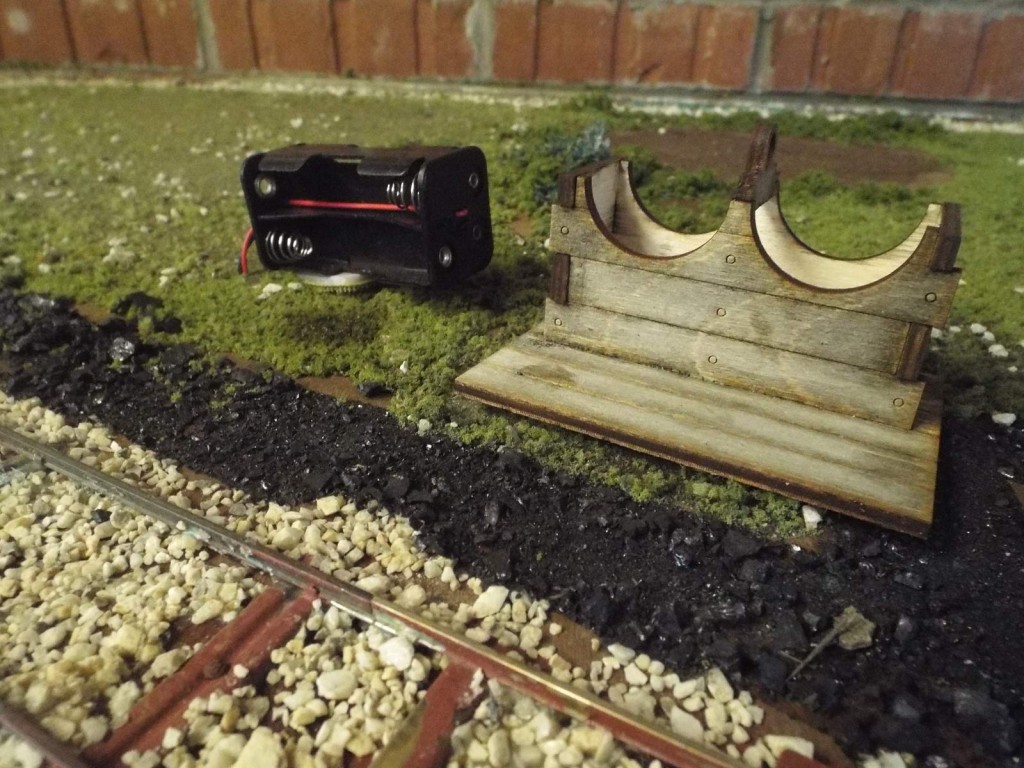 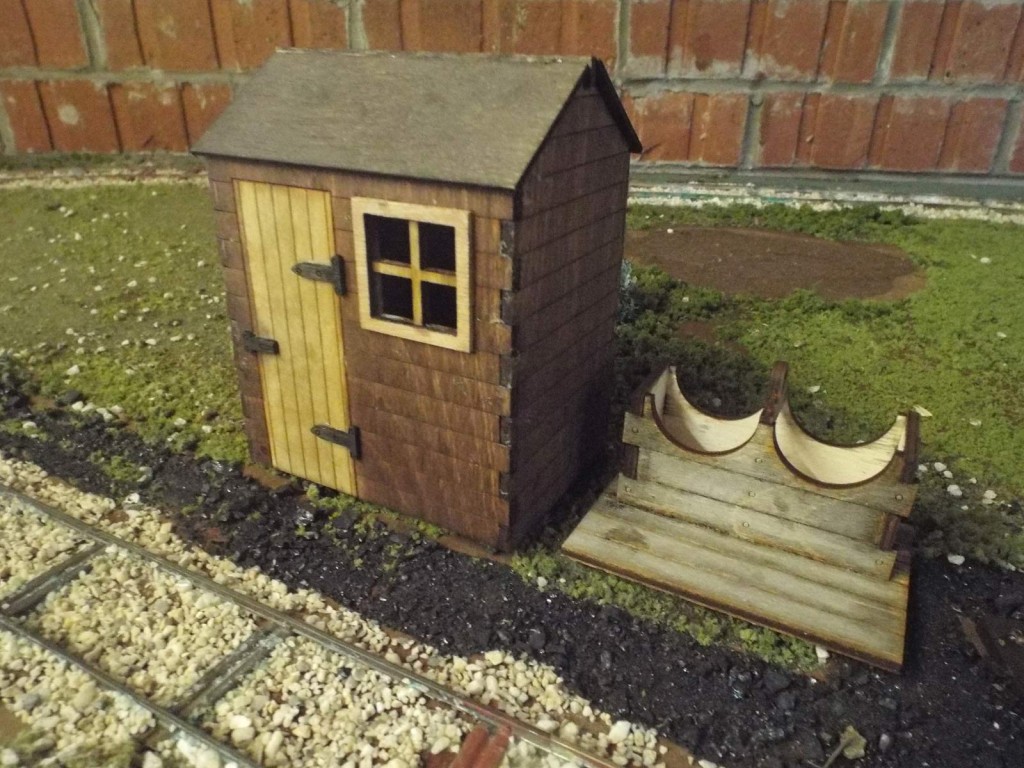