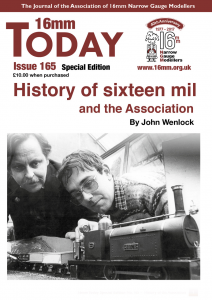 I’m pleased to advise that John Wenlock has completed the Association History and Gareth Jones has laid it out in time for publication before Christmas – just!  Both have really pulled out all the stops to complete what’s been a major piece of work.  The History will be collected by Royal Mail from Warners Midlands on Thursday 21st December.  It’s a busy time of the year for the postal services and whilst as usual it’s going First Class to UK addresses and Air Mail to all overseas addresses, some of us may not receive it until after Christmas.  So if your mate down the road has his and you haven’t, please be patient – it is on its way!

I’ve less positive news about the Anniversary Etch.  The timeframe needed to create and deliver 230 sheets, which need to be cut into 18 individual etches and then bagged, means that we can’t deliver it before the February 2018 mailing.  During the time we’ve been working on it, costs have risen putting the project very well outside the planned budget.  So instead, we’re working on creating the headboard on its own as a flat, pre-coloured, sealed sign which can be delivered with February 2018 SMT and within the budget originally envisaged.  I can’t confirm that we’ll achieve this at present – we’re waiting for samples and confirmation that it can be glue tacked to one of the elements of the February mailing.  As soon as I have more information I’ll share it via Shed Notices and our other social media.

But to return to the History, which other than the cover page will be as big a surprise to me as it will be for all but a few members, I’d like to thank John and Gareth for the work they’ve both done.  I’d also like to thank all those who supported John in compiling the publication, which hopefully will include happy memories for many members and an insight into how the Association has developed for newer members.

Merry Christmas and a happy New Year to you and your families.