I will admit straight away, with no conscience , that I am a toy steam boating chap principally! Had circumstances been different forty years ago I might have ended up a steam loco chap instead. But there you are, I make boats and not trains… except for this experimental turbine piece, built for my own pleasure rather than for show on anyone’s railway. Being an engineer (a dying breed, alas) I am interested in everything, especially mechanical things and like most of the older engineers I know steam contrivances in particular. I do have one electric boat, an RAF crash tender Kiel Kraft kit from the 1960’s which Duncan gave me a couple of years ago, half completed. It had been in the loft for 50 years, untouched, until he rediscovered it and clearly knew the bloke who would finish it! It’s very special and I love it. However, the enjoyment of sailing it does not compare with my coal fired Clyde Puffer experimental project which requires much coaxing and oiling and stoking and… well, everything that makes steam interesting. 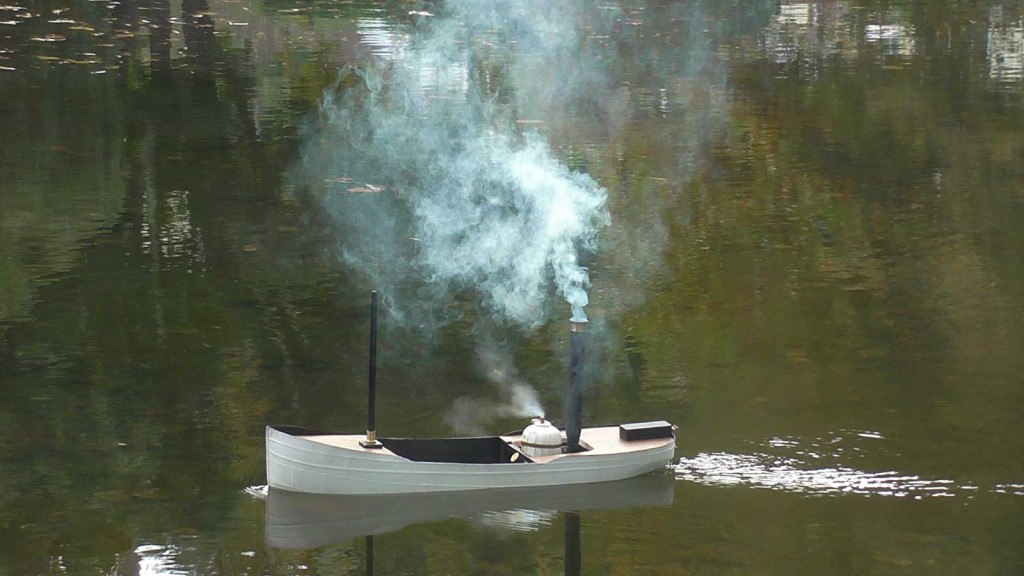 Duncan is principally a train man although he thoroughly enjoys our boating trips to the pond and has one of my paddle steamers which, with his enhancements, makes a beautiful sight on the water. He belongs to the East Surrey 16mm group and whenever I visit the area it is great fun to attend the evening steam up. 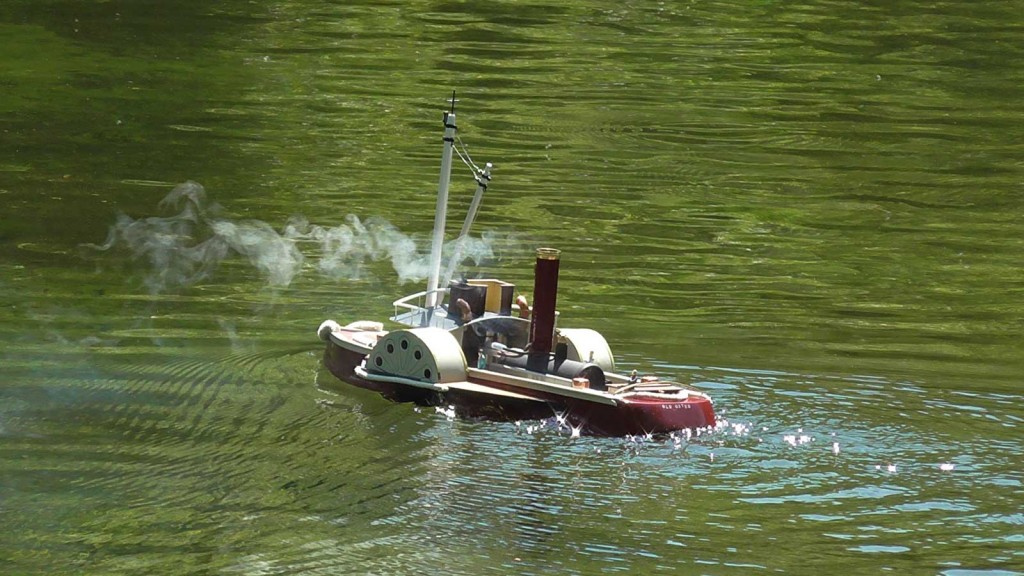 The names of the trains and manufacturers and the differences between Wallchapels or Steptoe and Sons valve gear are all lost on me; they all look wonderful and smell and sound lovely as far as I am concerned. But no one has a turbine loco! My task is clear, then: to design and build a steam turbine machine which actually works i.e. travels along the rails. The speed is of lesser importance, although snail pace would be a little dull. All the dimensions and pressures and capacities are guesswork although there are various old books and magazine articles which point one vaguely in the right direction. 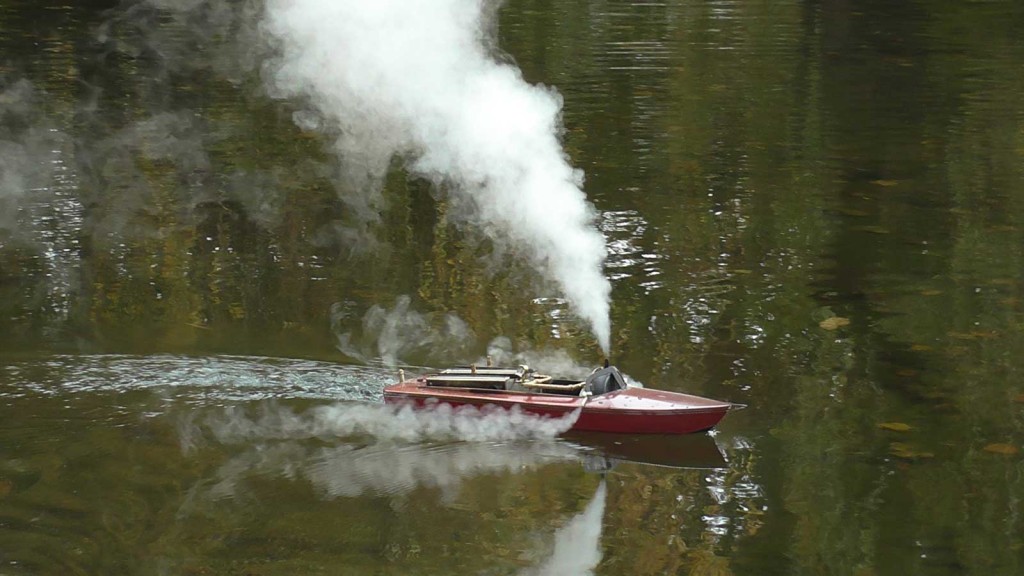 I started with a turbine boat (of course) to get the hang of the idea and to see how to make the wheel and roughly what size it might be. The first thing that became obvious was that one needs an awful lot of steam and a similar amount of pressure and a lot of heat to move a single wheel turbine at anything like a useful speed. The other information I gleaned from the publications was that a turbine would rotate at very high speed, but this depends on load, gearing , steam inlet velocity, nozzle size, turbine wheel diameter etc. To limit the rotational speed I made a largish wheel, 100mm at the periphery , which I guessed would have good torque and would need less gearing. I made two huge finned pot boilers , side by side, after an experiment with one proved inadequate. Two boilers with a heavy turbine nearly sank the boat, but with a tray type meths burner under each boiler and 4:1 gearing the model made reasonable progress through the water. This was very encouraging! There is nothing like a bit of success to spur one on to greater things. The turbine will self-start at 30psi and the boat will travel at about 3mph when the pressure gets to 60psi. Not blistering I know, but it worked. 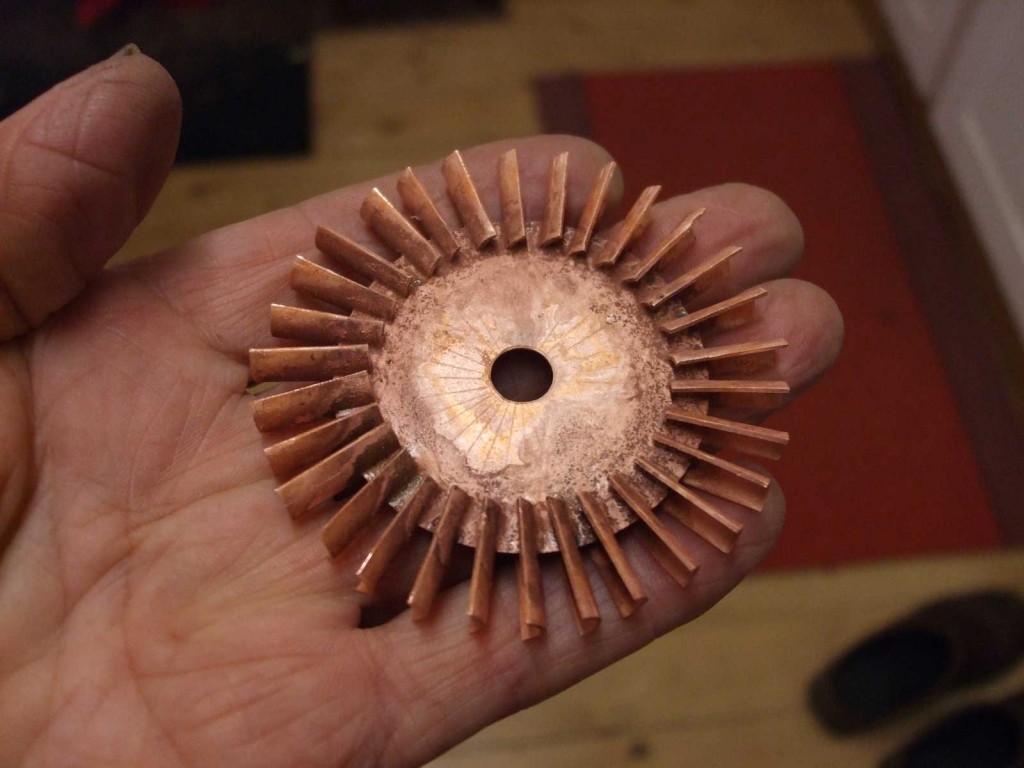 There are many variables to consider with a turbine:

Because there are so many variables it’s quite difficult to hit upon a working combination. Anyway, I can’t get more steam out of the boat as the boilers are of maximum size and I have an inferno under each which threatens to engulf the whole thing in flames: so I guess I’ve reached the limit for this boat. You can see from the picture how much steam it uses! 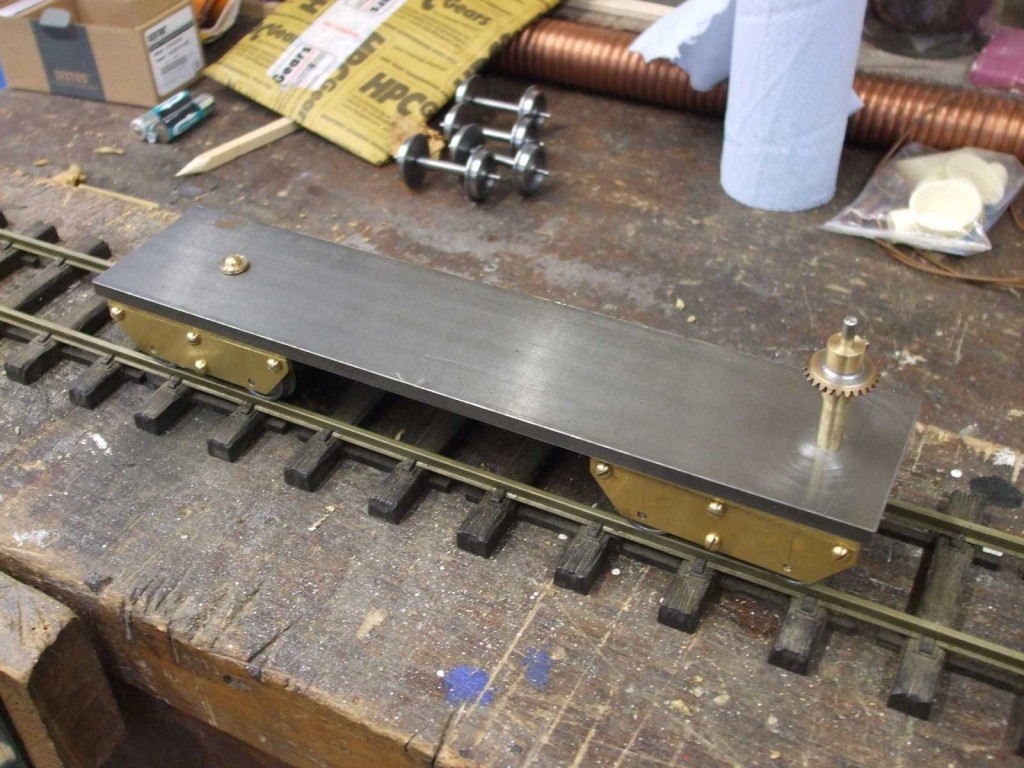 So, a turbine loco… hmmmm! The main difference between a boat and a train… ooops sorry LOCOMOTIVE as my friends keep pointing out, is that there is a lot more resistance to motion with wheels rubbing against metal rails (especially around tight curves) than there is with a prop in the water. Also, there are a lot more bearings with a complicated drive train from the turbine to the wheels involving a gearbox, two sets of bevel gears, two lots of axle bearings, and a chain drive . Initial design thoughts ruled out an 0-4-0 arrangement because the boiler would be very long and of large diameter and the turbine and gearbox would take up too much room on the base frame. The only option was to have two double axle bogies (Bo-Bo) at either end of the frame . The first complication arises: how to get the drive to the wheels, and how many wheels should be driven? I decided that both axles on one bogie should act as the drive to give adequate traction and this subsequently proved to be correct as the wheels slipped on tight curves  when only one pair of wheels was driven. The reader must appreciate that from the outset this ‘loco’ was not meant to be ‘pretty’ or even approaching anything attractive but was intended only as a test bed to prove (or disprove) the turbine principle and to establish the relative sizes and capacities of the constituent parts. A comparison between the Flying Bedstead and a Harrier Jump Jet springs to mind! 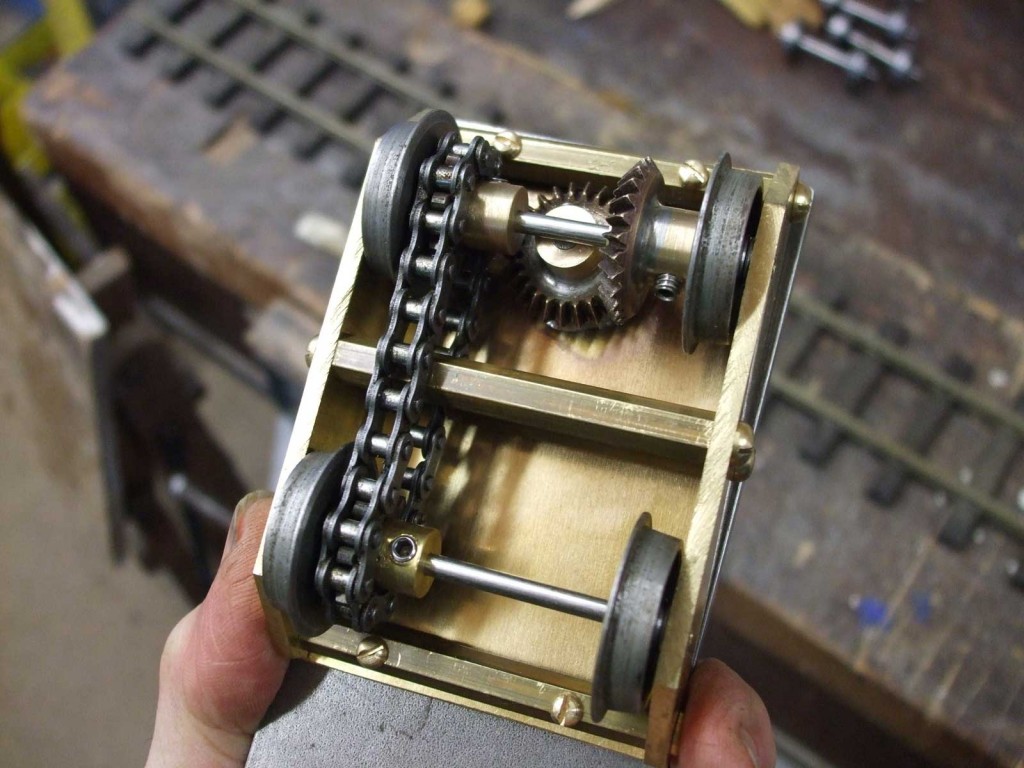 In order to get the drive to the wheels the vertical shaft has to go through the bogie pivot swivel pin. If this is directly over one axle, rather than in the centre of the bogie, a set of bevel gears will suffice along with a chain drive for the other axle. This arrangement allows for the gears to be slid along either shaft to mesh properly. Once the drive is above the frame another set of bevel gears will connect the drive to the gearbox. As you can see there are a lot of places of resistance, and for a small turbine to cope much gearing down is needed. You will appreciate that the whole success of the project hinges around how much gearing is incorporated in the design. With a very high ratio gearbox you would be able to blow the turbine round by mouth but the train would only travel along very slowly. With too low a ratio, the turbine would struggle to produce enough power to move it at all. I started with 16:1, i.e. two sets of 4:1 spur gears. Initially this proved too low when the boiler pressure was 60psi, so it was changed to 36:1. Now that I have 100psi I could possibly revert to the 16:1 arrangement which would increase the train forward speed, but this is yet to be done. 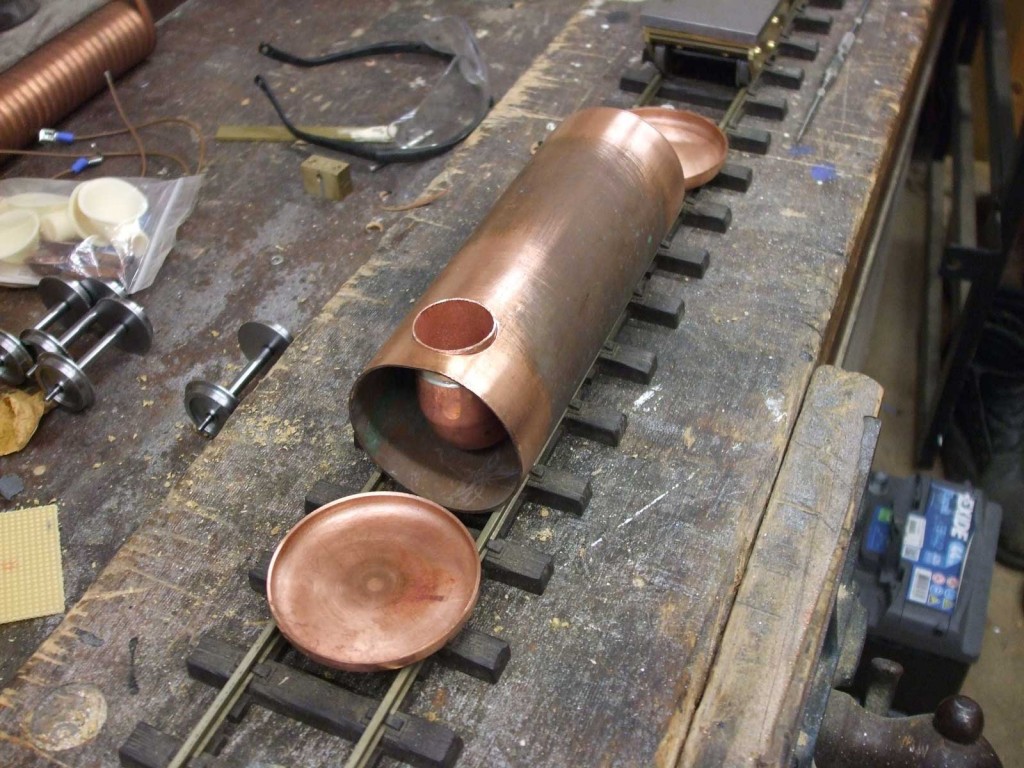 The boiler is centre flue 67mm dia. by 170mm long and I wanted to fire it by gas. I spun up the end caps on my Union Graduate lathe (an easy job which you should have a go at) and silver soldered an elbow into the centre flue so that the flue came out of the boiler top. Once assembled the boiler was tested to twice working pressure and all was well. 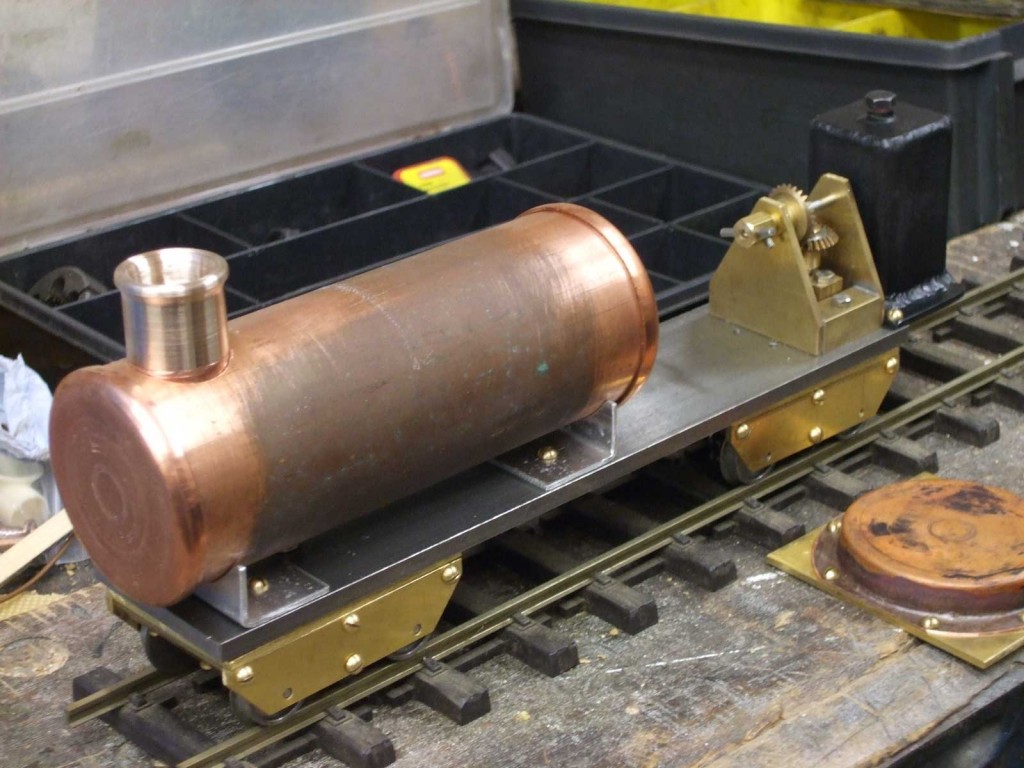 Boiler and gas tank in their original position

The first full test was ‘interesting’ and I learned a lot , mainly that there was nothing like enough heat and pressure from the gas firing, only 40psi being attained. With the whole frame lifted from the rails the turbine ran freely with the wheels rotating at a good speed, but seeing as the thing needed actually run ON the track this state was not at all satisfactory! 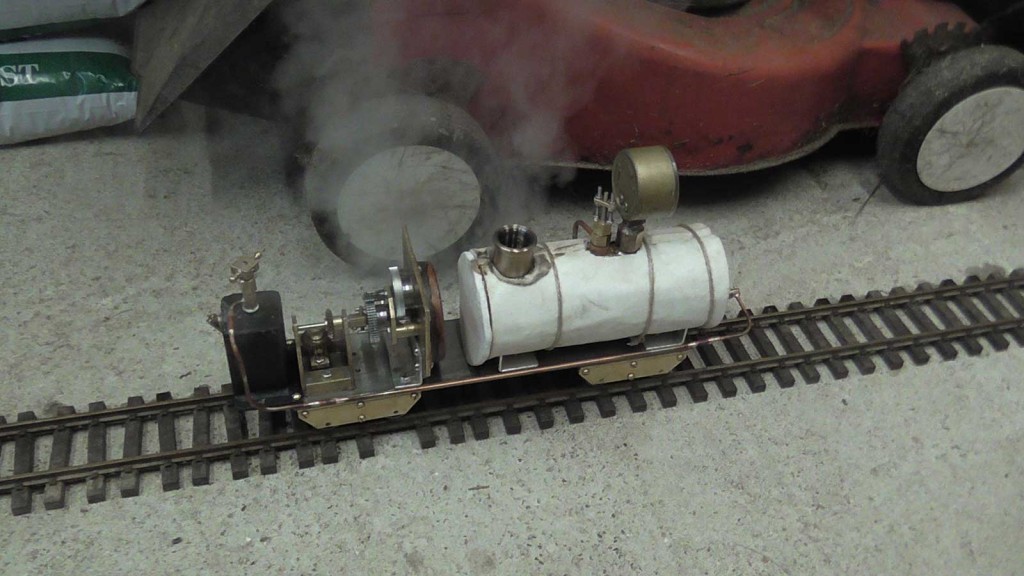 More heat please! I raised the boiler and made a stainless casing for it so that additional heat could be supplied from some other source directly underneath. This took the form of a tray which could hold some fuel tablets. (Oh no! Not those dreadful things! – I know, but they are very convenient and provide a quick source of heat.) This was a simple solution and it worked. With the gas on and 3 tablets the pressure rose to 60psi which took the train along the straight and 90psi took it round the curves which are 2’6” radius. 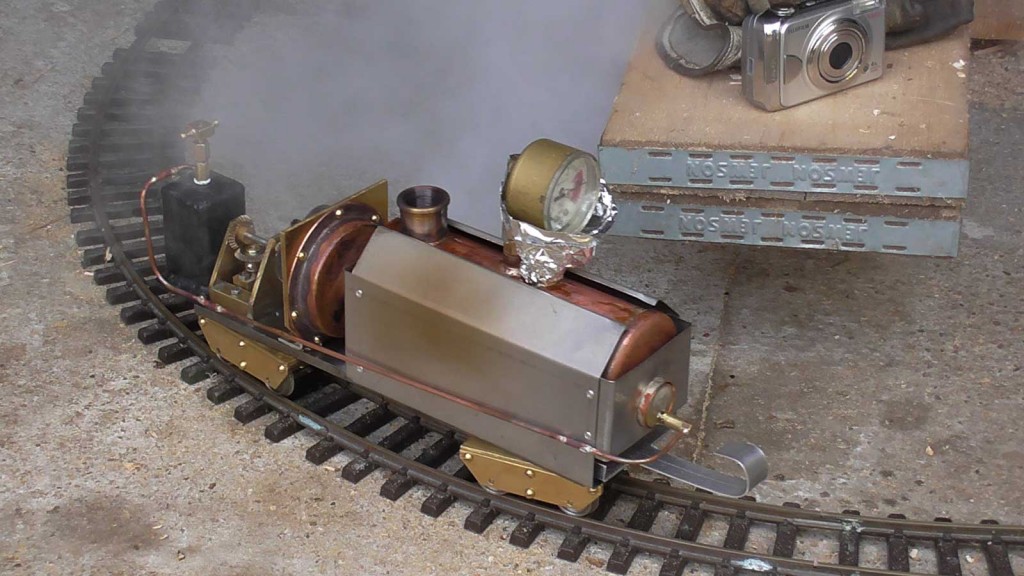 Boiler reversed, and a tray with tablets underneath

I use tablets on my toy boats as they are very light in weight and give good heat. I know the fumes are not conducive to good health in an enclosed space, but I doubt that meths is of much benefit either! Anyway, I decided to make a ‘chicken feed’ type meths burner which takes up a lot of room on the frame and increases the weight considerably. On a loco this is not such a problem of course, but in a boat everything is kept as light as possible, hence the tablets. 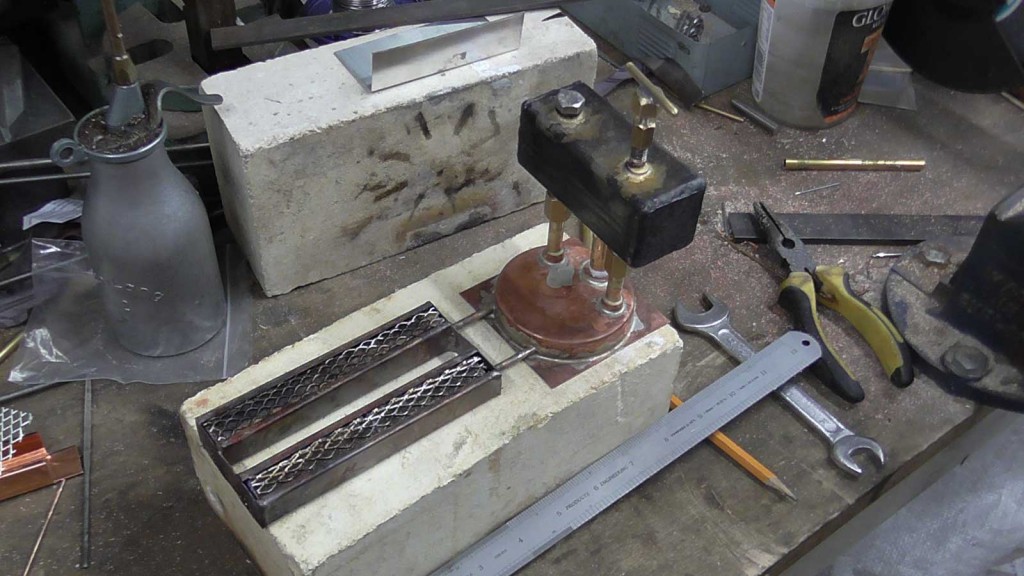 So, the thing is ‘finished’ and it works! I would like more speed: at present it is about one and a half mph with 100psi boiler pressure. As mentioned I will reduce the gear ratio, as I expect with this pressure the turbine may well pull OK. We shall see! 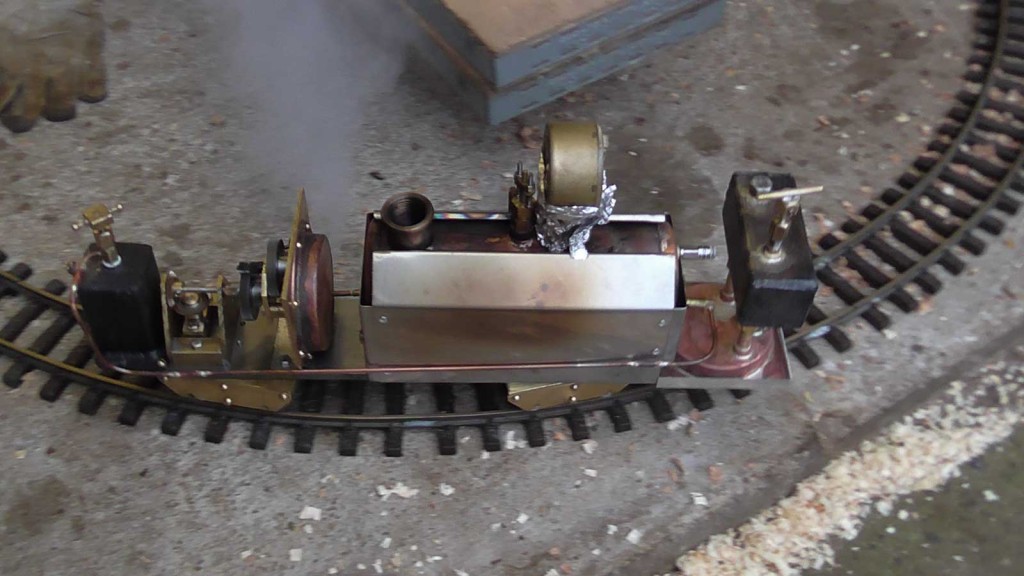 The loco with meths chicken feed burner in place