The basis for this model started when I purchased some second-hand Accucraft rolling stock. This had been converted to run on 32mm gauge, which suited my line, but the 45mm wheelsets for the rolling stock also came with it. Many of the members of my local area group have 45mm gauge lines and whilst it is easy enough, where possible, to re-gauge locos to take along to run, it is usually a different proposition to re-gauge rolling stock. I therefore started to think about making some rolling stock just to run on these lines using the spare 45mm gauge wheelsets. I fancied something a little unusual but didn’t want to spend too much on it. Initially I started making a couple of coaches, but subsequently these were abandoned and eventually my thoughts turned to a box of old clock repair bits that had come from my late father’s workshop. I put these together with a lovely little vertical boiler with a dummy chimney from an old defunct stationary engine and the concept of making a steam crane then began to grow. The chassis from one of the earlier coaches would become the base for it.

The array of bits used to make the crane wagon.

I researched various types of steam crane on-line to get a feel for what needed to be included in the build. The essential items seemed to be: a boiler – preferably vertical; piston(s) – usually on both sides of the crane; large gear wheels driven from smaller pinions for winding gear to raise and lower the jib and likewise for the hook; some form of horizontal gear to enable the crane to slew; a brake on the hook cable drum; plenty of handles to operate dog clutch/gears; sturdy stays for the frame of the crane mechanism gear and a central post to facilitate turning and to give support. From an early stage I decided it would just be too complex to try to make a working crane, even if it were not to be steam operated, however, I wanted to try to make it look as though it might work if not studied too closely! The cylinder from the stationary engine was just too small to be of any real value, but I had another Mamod type one spare and so that was incorporated instead, albeit that this meant that I only had one piston visible on the mechanism. The driven wheel for this is an old Mamod wheel with the flange cut off.

During the wet winter of 2015/16 I spent many a happy hour in my shed trying out different bits from the clock box to see what could be assembled in a reasonable fashion. I find it quite easy to get carried away with this sort of thing and eventually I had to draw a line and say that’s it for the steam crane mechanism! The frames for the crane mechanism were fashioned out of clock frames. An aluminium plate was cut for the swivelling base and a separate piece made up and bent to surround the boiler and firebox. I decided to make a simple frame from brass tubing and angle for a corrugated iron roof – which would be made from baked bean tins, of course. The main crane mechanism frames were bolted to the baseplate, along with the boiler. The majority of the axles, gears and handles were to be simply glued into place at the time of final assembly. I chose the length of the jib to be of a reasonable proportion in relation to the crane body and the jib itself was made from up aluminium channel sections from the local DIY shed with some brass strip to form the cross bracing. Due to its length, the crane jib would need to swivel to allow it to navigate around curves on the railway. A central bolt was therefore arranged to go through the chassis as a pivot point.

The crane with its match trucks.

As the whole thing came together I realised that I would need some additional match trucks to run with this beast. I bought two Accucraft W&L match trucks which I then converted. One of these had a frame mounted on it for the jib to rest on and the other had a water tank made from an old brass box mounted on it. The length of the jib, however, meant that I needed something to run between the crane wagon and the jib match truck to take up the extra length. I still had some spare 45mm wheelsets and so made a sort of small Péchot bogie with a set of Accucraft W&L axle boxes. The wheelbase of this little truck is actually shorter than its width, but seems to run okay. I decided to use Accucraft chopper couplings between the crane and its match trucks as coupling with 3 link chains would not be straightforward, but the match trucks provide a conversion to the 3 link couplings that I use on my engines.

Fine chain of the type used to hold 16mm scale wagon loads in place was used for connecting the jib and hook to the winding drums. As the mechanism does not operate the chain was glued to the drums and to the pulleys on the crane jib. This way the chain doesn’t come off when the jib is moved about but with the jib lowered into its position resting on the match truck the chains swing nicely as the wagon trundles along the track. I made up a length of larger chain with suitable hooks at each end made from brass wire. This can be used to hold the jib in the raised position if needs be and even though this means the chains from the winding drums falls slack, the effect of the jib slewed and raised, as if at work, is reasonably convincing. 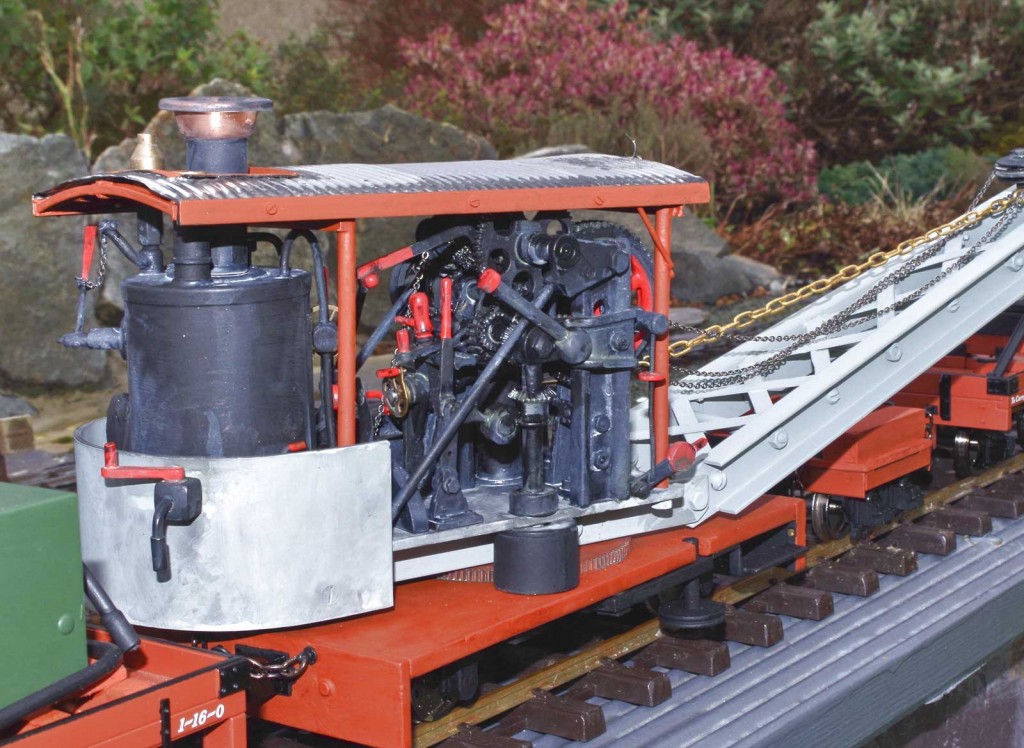 Not much room in there for the operator!

Once all the various bits and pieces had been fabricated and tried out together, the train was tested on a local railway line to ensure adequate clearances during operation. I then dismantled the whole lot to prepare the pieces for painting. The collection of all the pieces was rather bewildering and I’m quite sure that some of these went back in different places from the original intentions! With everything place there is very little room for an 16mm scale operator and I’m sure it would be quite dangerous to be tasked with trying to reach all the various handles and levers ! A degree of weathering was applied to the mechanism before the corrugated roof was fixed in place. There are still a few extra details that I’d like to add to the train as a whole and to then complete the overall weathering process – including allowing the tin roof to rust! As the steam crane set began to reach completion, I also bought an Accucraft Isle of Man 3 plank wagon as I felt this might look well with the train. An old Andel short wheel base van was converted to 45mm gauge to run with this by using more of the spare wheelsets. I now needed a Guard’s / Mess Van for the train and came up with a design for a free-lance bogie vehicle based on a type used on the Indian Railways. The last of the 45mm wheelsets were used for this, along with a couple of old Binnie bogies that were altered to take the wider gauge wheels, and these were mounted onto a simple plywood chassis. The body was fabricated from plywood and the rails at each end were from strip brass. The roof for this vehicle is simply an inverted small wooden tray bought cheaply from a charity shop and with brass tubes to act as supporting columns.