With all the excitement of Roundhouse’s Darjeeling “D” class Garratt going around recently; I thought I’d share with you a story about one of my father’s first scratch built locomotives: The Morgan Locomotive Company Number 4.

To fully appreciate what a remarkable locomotive this is, we’d have to go back to the beginning. Built in 1999, this little Garratt was built during the time when my father wanted one of every type of articulated locomotive. (He’d already built a Shay and an Avonside Heisler.) The original Leigh Valley Light Railway was a heavily twisted and graded line; the two geared locomotives performed very well and were very controllable. 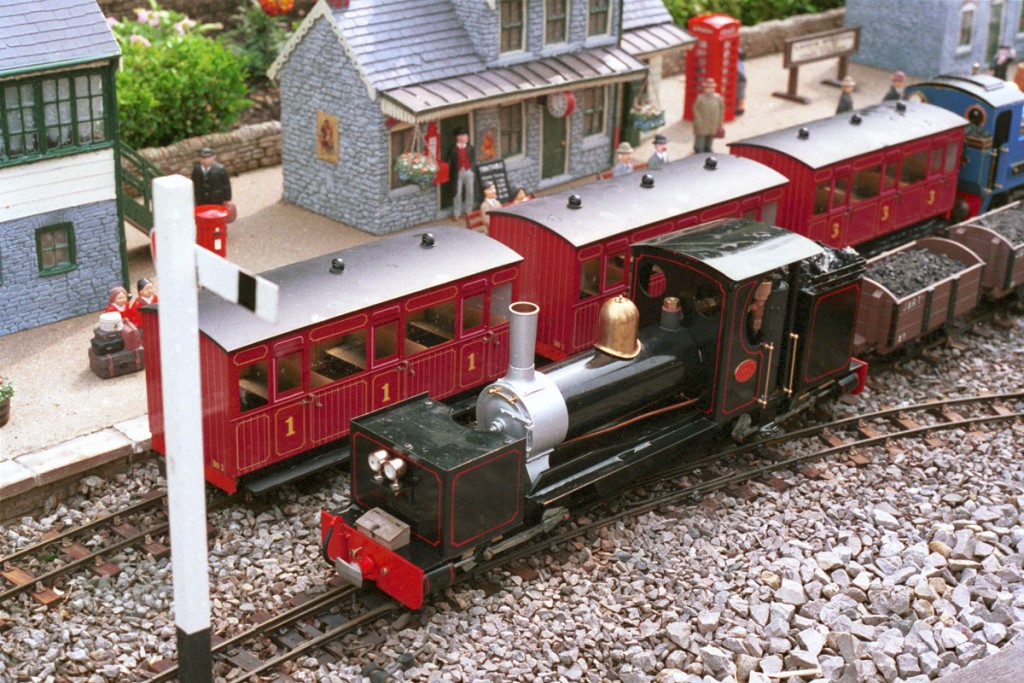 Garratt No. 4 as originally built

The Garratt was built as a geared locomotive, with a twin oscillating motor hidden in the rear tank (similar to many of Peter Angus’ locomotives). This was powered by a Roundhouse Lady Anne boiler. The Garratt was freelanced, although design “hints” from the Garratts of the C. F. Vicinaux du Mayumbe are apparent. With its smart SAR style black livery, the Garratt was a regular sight on the LVLR open weekends. Due to its rather low pulling power, a train of eight lightweight wagons were built especially for the Garratt.

In 2005, my father took delivery of a Locobox Darjeeling Garratt. With its large boiler and “big bore” cylinders; it was a powerful engine and the master of any load. Dad built six heavy timber wagons; similar to the wagons from South Africa; for his Darj. Thoughts soon turned to Garratt number 4 and whether he could rebuild it to be similar to the Darj. 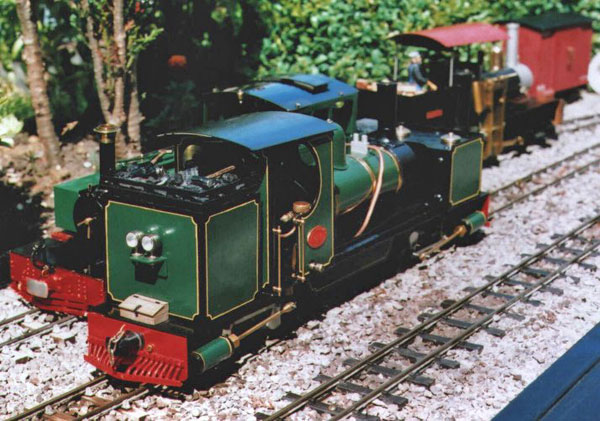 Garratt No. 4 following its rebuild

Number 4 was taken apart and rebuilt with new frames, Locobox big bore cylinders and a Locobox steam reverser. The engine emerged in 2006, carrying a smart lined green livery and a few detail changes; such as the red cowcatchers and injectors similar in style to the NGG16’s. It also had working directional lights from a battery in the rear bunker. To say the locomotive was transformed was an understatement; it became a very powerful engine, although still not as powerful as the Darj. Again the locomotive was one of the main haulers on the LVLR. LVLR lettering was also applied not long after. 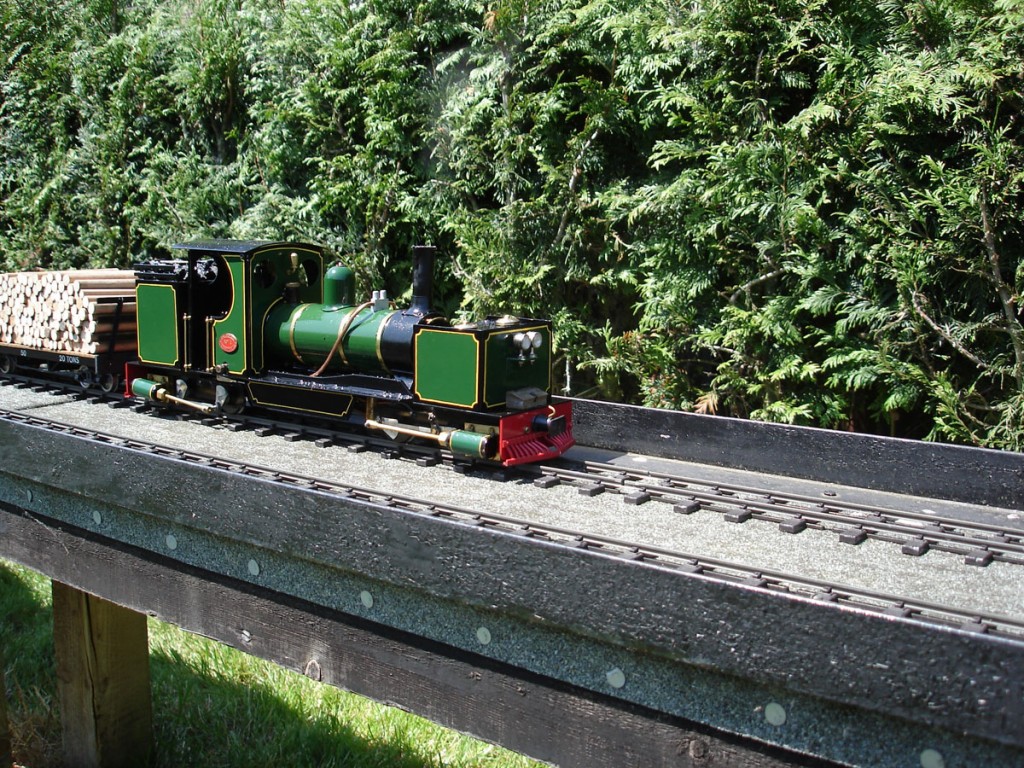 No. 4 seen in action on the South Arbury Railway

The main weakness of the Garratt was always the boiler. With four oscillating cylinders to supply with steam, the boiler was barely adequate for the job. In 2010, my father decided to re-boiler the Garratt with one made by Cheddar. At this time, the green paint on the boiler was refreshed due to Halfords paint not being up to the job! The smokebox was also repainted with matt black BBQ paint, and spectacle plates finally added.

Once the locomotive was run for the first time; it was clear that the new Cheddar boiler was supplying more than enough steam to the cylinders. Number 4 quickly became one of the most powerful locomotives we own; pulling the original six timber wagons and more, and at speeds that would humble any Mamod. In 2015, the Garratt was named after my long term Girlfriend: Gemma. 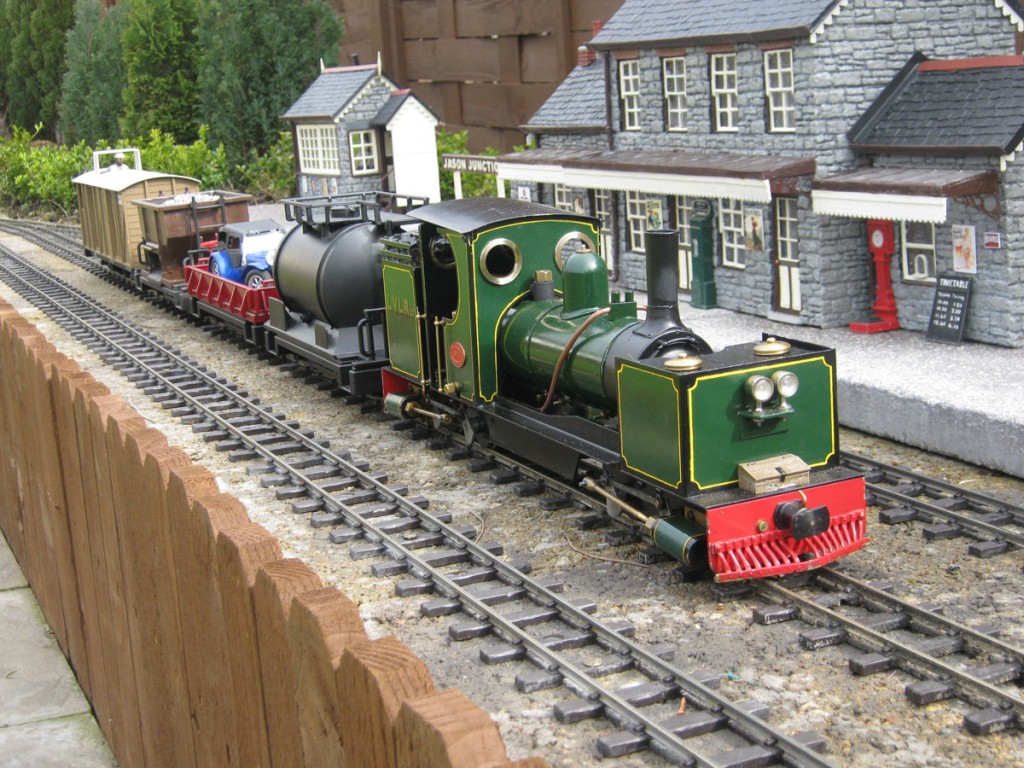 As my father’s interests moved away from anything non-Garratt, most of his locomotives have been sold and replaced by new Garratts with (ironically) hidden oscillating cylinder motors. He’s also made a Garratt with two Roundhouse chassis; following the lines of a Salem Garratt. We also own an Accucraft NGG16, with a Roundhouse Darjeeling “D” on its way. As a result; number 4 is now the only Garratt with outside oscillating cylinders left on the LVLR. Its many years of use have made the Garratt rather tired looking. Maybe once I’ve finished my NWNGR Single Fairlie, I might give old Number 4 some TLC it deserves. 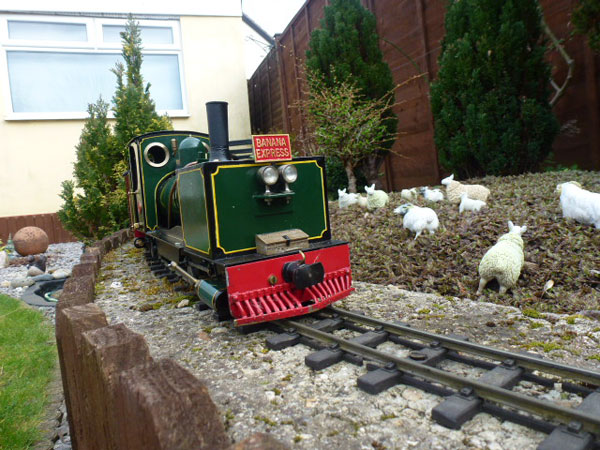