Long serving members may remember the original NCR collaboration with the neighbouring Coquet Valley Railway to build a single car 4 wheel railbus (Photo 1). Each company produced a vehicle to the same design that could couple and run in multiple across both companies metals. When the CVR ceased operations some years ago the NCR vehicle continued in revenue earning service until gearbox problems forced its withdrawal from traffic. An unexpected windfall allowed the NCR to purchase a new steam loco from Doncaster works and this shared passenger duties with a Hunslet diesel loco. 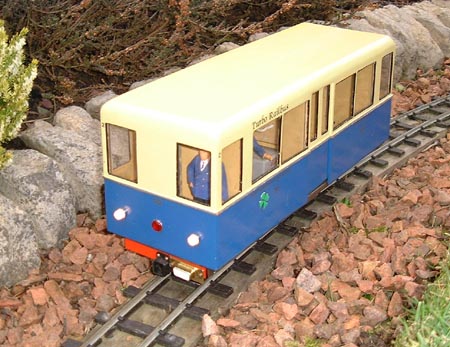 There were still some railbus advocates on the NCR board who persuaded the company to persist with a DMU option, this despite a growing “heritage” side to the company business that grew with the regular use of steam traction. The desire to resurrect the railbus won the day and in order to reduce costs it was decided to modify an existing coach design rather than embark on an expensive new build. The business plan was based on a recent announcement from the CVR that it was to reopen, with the prospect of through running once more and increased revenue as a result. The Atlantic observation coach from the IP Engineering catalogue was deemed suitable and two units were purchased to be rebuilt in the NCRs kitchen works.

The shed foreman had served his time at Metro-Cammel, and remembers well the multiple units being developed for the Tyne and Wear metro sytem, two car units with a central power bogie. It came as no surprise to see the centre power bogie principle being employed on the IP conversion, and as a result the NCR railbus was to be powered in this manner, with non powered bogies at the leading/trialing ends.

There was in fact little major surgery to be done on the IP units, other than the fabrication of a driving cab at the observation end of each coach. (Photo 2). The non power car was modified with a Guard’s compartment to accommodate the RC gear, the windows being fitted with “frosted” glass to simulate a toilet compartment. (Photo 3) 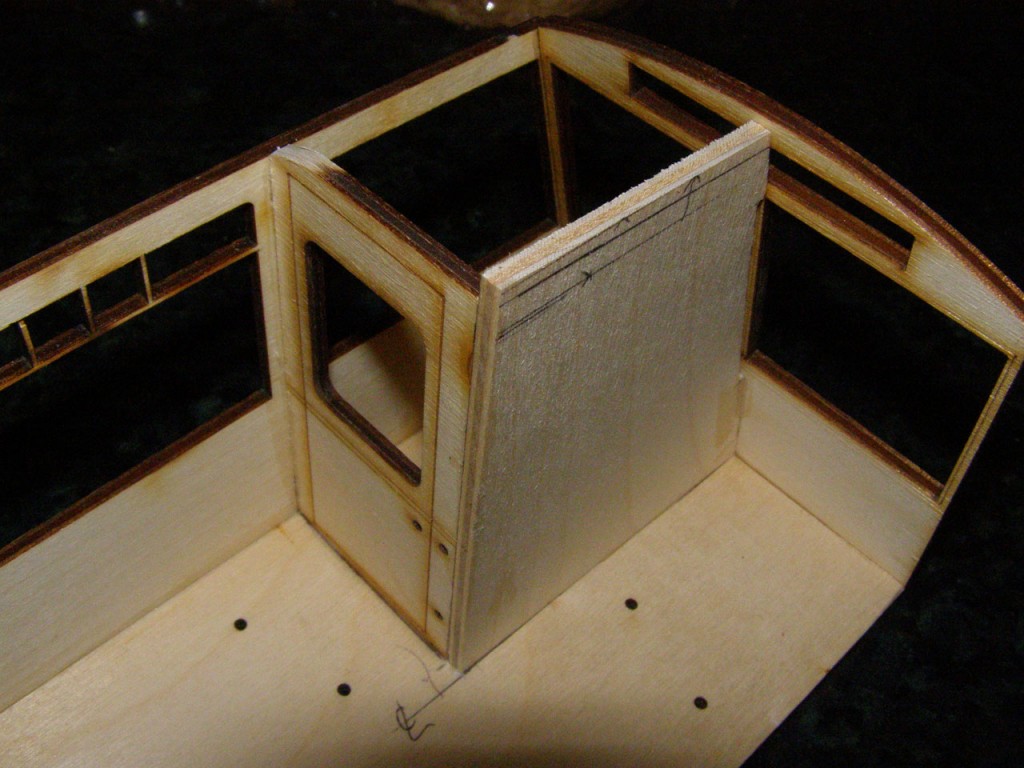 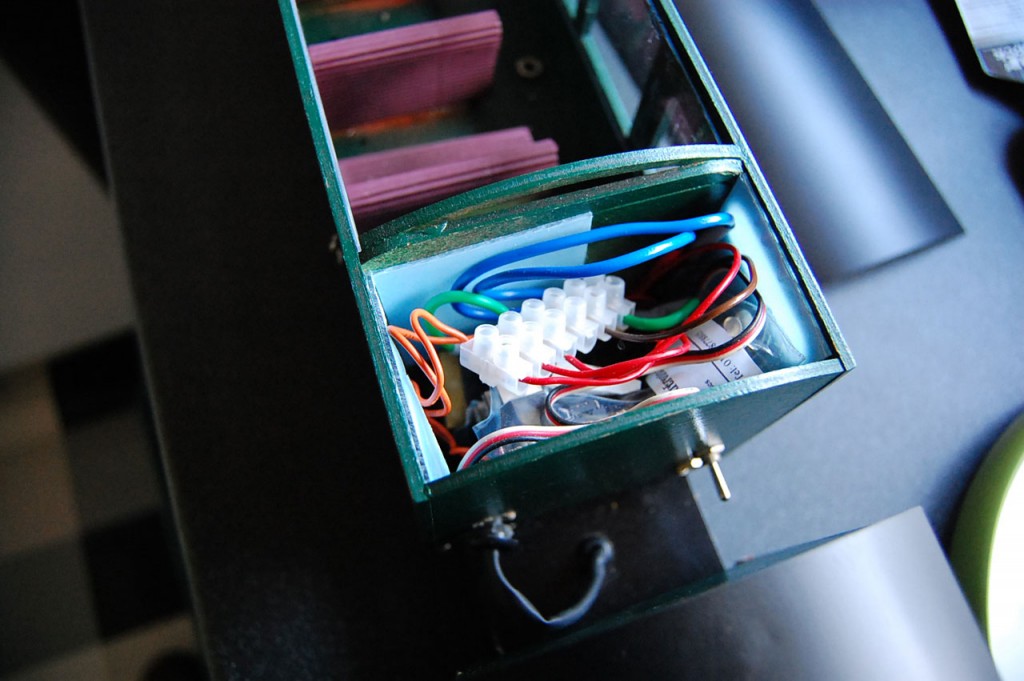 The Essel power bogie (photo 4), having a flush top plate, was easily modified with two bushed holes. The bushes were rubber wiring panel grommets. At the trailing end of each coach a nut insert was fitted and into this was Loctited a 6mm fitting bolt, the head of which had been removed to provide a plain pin. (Photo 5) The pin locates into the grommet which acts like a doughnut and allows the coach to swivel but also pitch in sideways planes to accommodate uneven track. 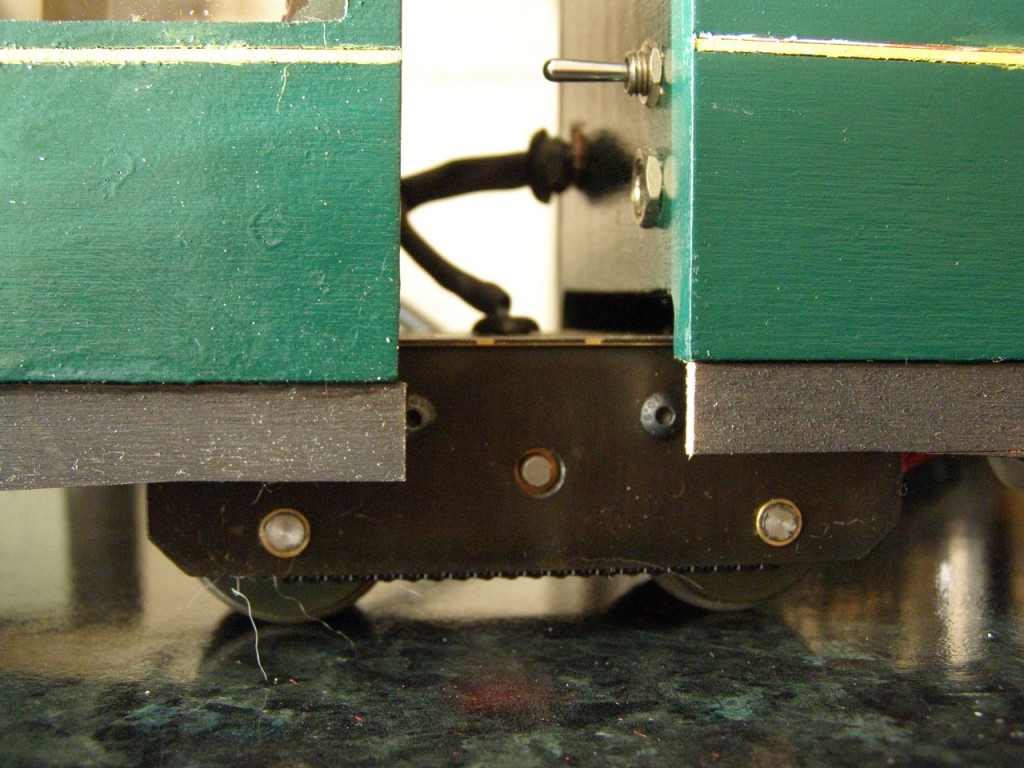 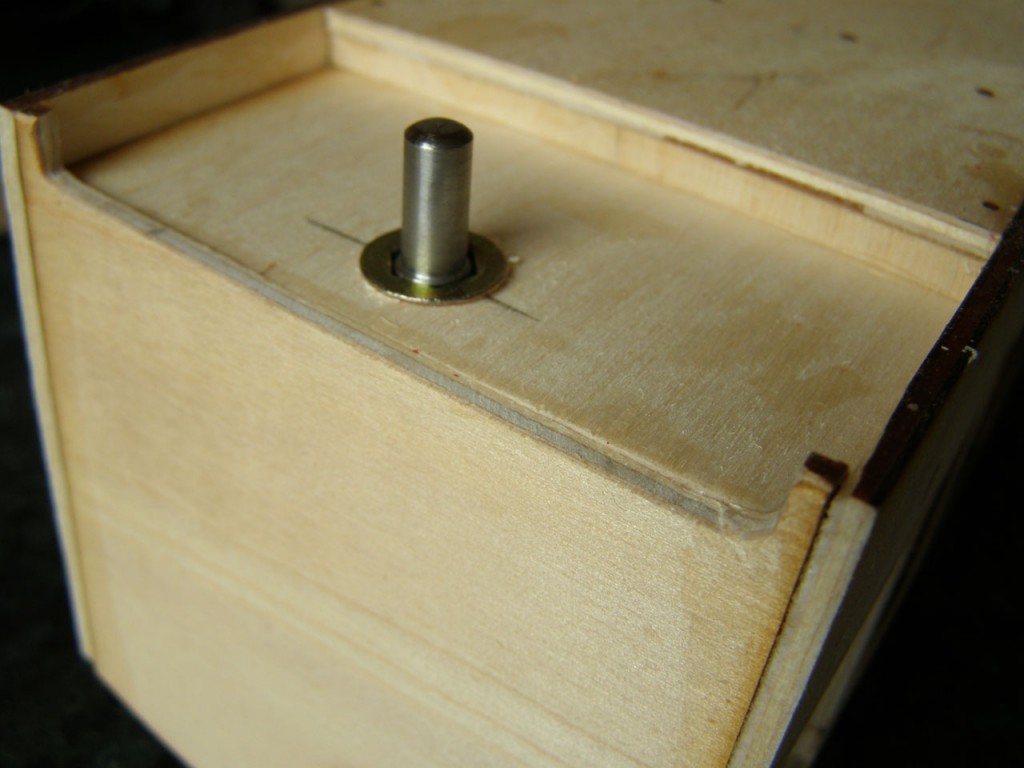 Power was provided by a NiCad battery pack mounted under the floor of one of the units, this arrangement was chosen to lower the centre of gravity on the “power car” whilst keeping the interior clear for seating (photo 6). The seats were upgraded using stripwood moulding from the local DIY store, cut and assembled and covered with doll’s house fabric to give the impression of comfort. (Photo 7.) 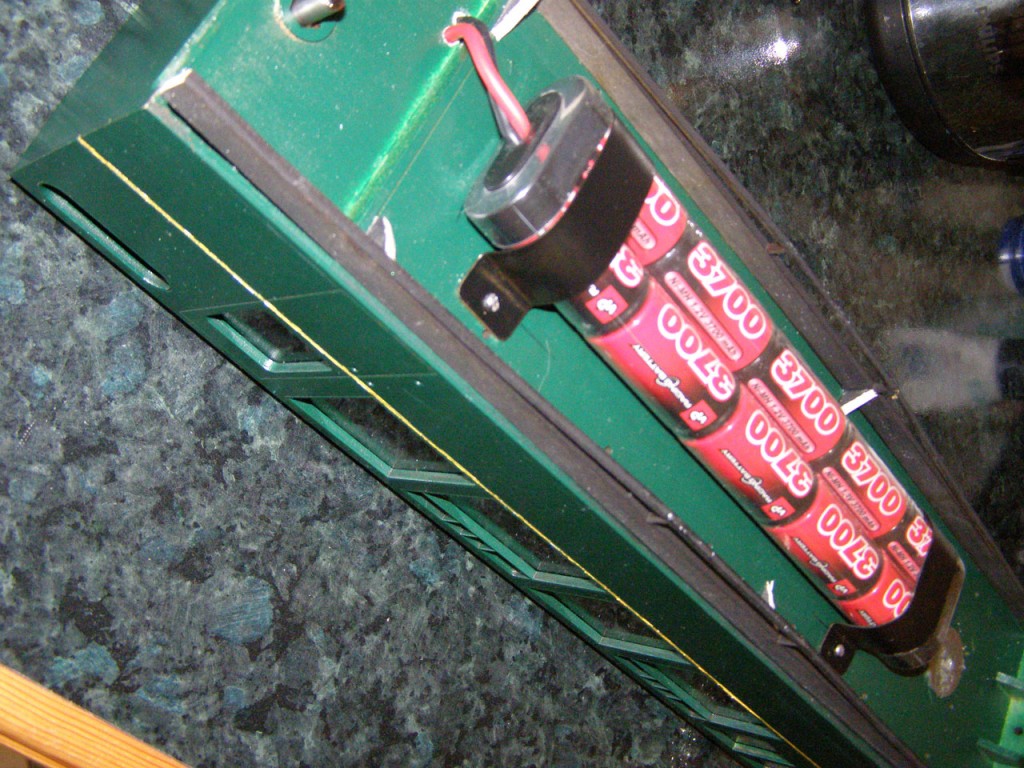 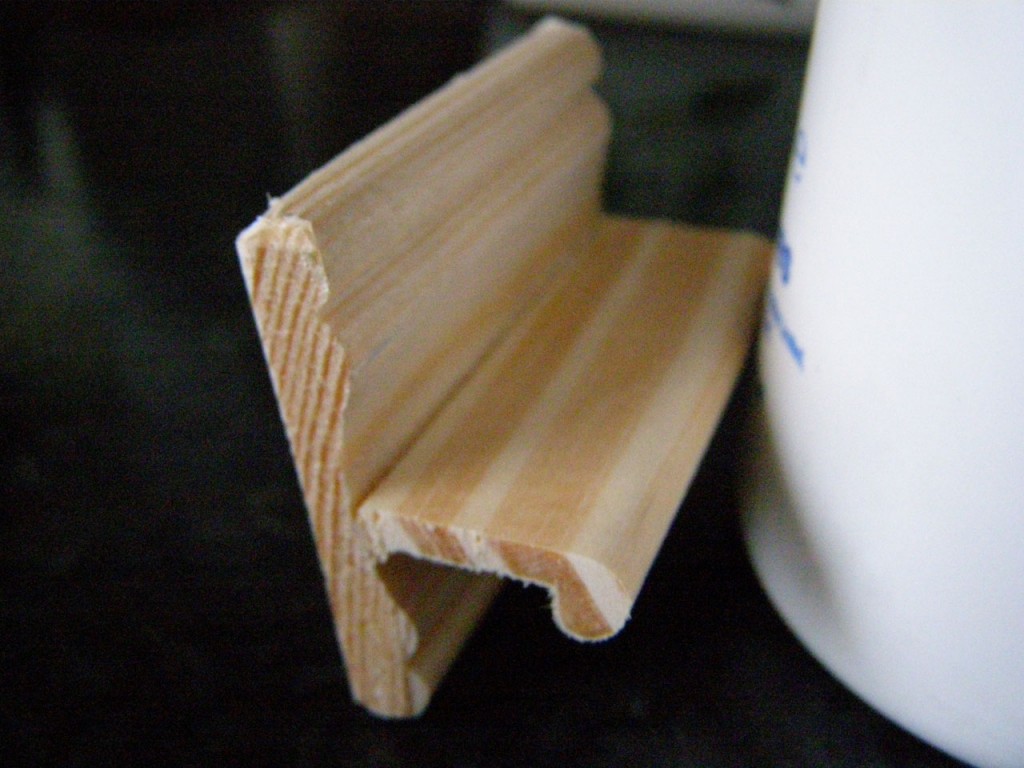 The units were painted in dark green with yellow “whiskers”, and fitted with roller destination blinds (designed on a pc) and lamp brackets at both ends. (Photo 8.) 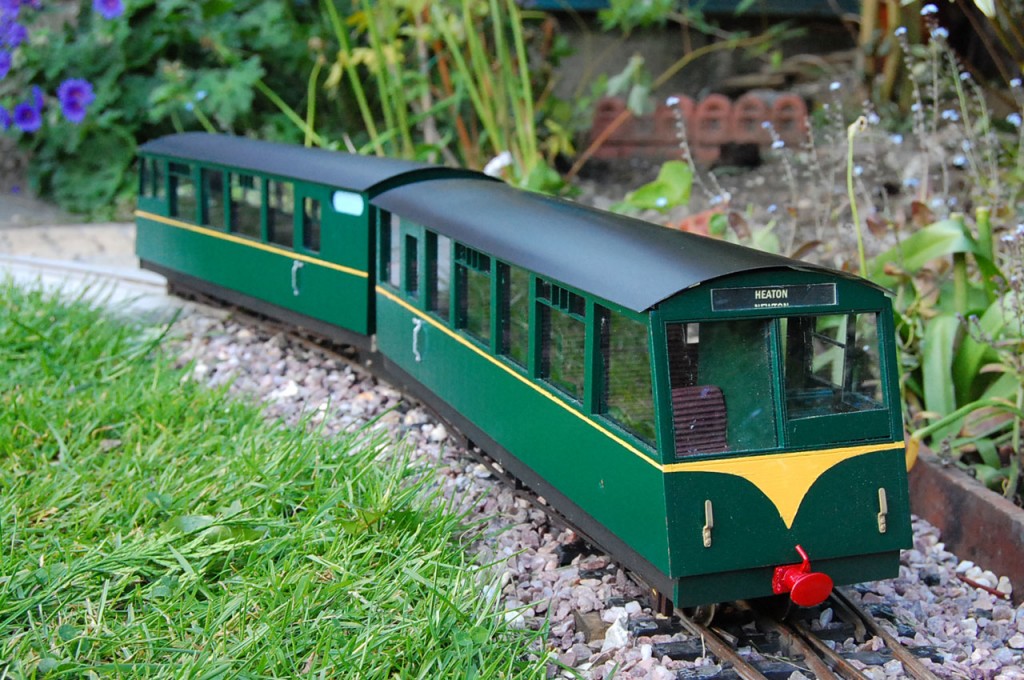 The DMU entered service on the NCR in May 2011 and quickly turned into a major failure. The anticipated reopening of the CVR did not materialise, and the low passenger numbers on the NCR could not provide sufficient revenue to cover the build costs. Added to this the sharp curves on the NCR necessitated severe sped restrictions, and the reduced journey times were no improvement over the steam services which passengers preferred anyway.
All was not lost however and the design and execution of the project was hailed a success, and a major feather in the cap of the kitchen works team.

In order to cover costs the DMU was sold on to another railway in the UK, and plans are afoot to refurbish the original 4 wheel railbus for a diesel heritage service. Some of the features developed for the DMU will be carried over onto this project, especially the underfloor battery pack. The NCR closed in 2014 after 21 years, however a small management team has acquired the track and rolling stock with the aim of building a small heritage railway high up in the North Pennines, probably the highest 16mm line in England, unless of course you know different! Due to the harsh winter conditions anticipated (experienced, definite fact!) the new railcar will be 4 wheel drive and fitted with integral snowploughs at each end!