In the letter I sent to all members on the back of the address carrier sheet used to send out the Festiniog Guide, I referred to changes that we were making to printing and distribution of SMT & Bulletin. These swung into action on Thursday afternoon 12th November, after Warners’ Group Publications Subscription department created the address carrier sheets used to send out the November editions of SMT & Bulletin, and Warners Midlands plc (a sister company on the same site in Bourne, Lincs, UK), printed and later distributed the package. Warners Midlands was setup in 1926 and Group Publications was setup in the 80’s. Technical Director Mark Rennie and I were present to see the first pages of SMT roll off the press. Here’s the press which was used – what you’re looking at is where the finished sheets are stacked. Note the 12700 top right in the picture – it was at full speed when this was taken. 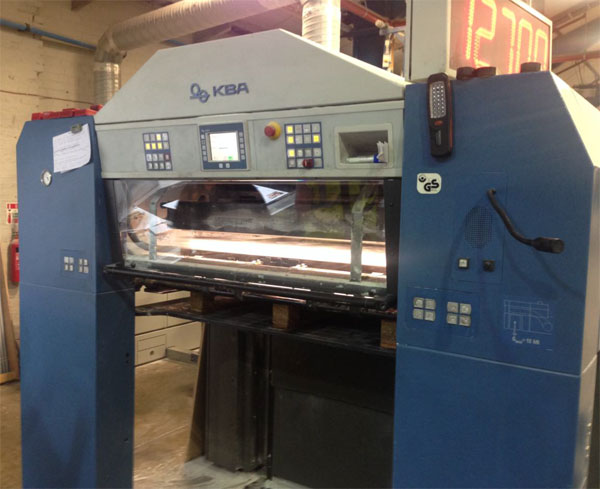 I’d seen during an earlier visit how the individual pages of SMT or Bulletin are transferred to the plates used to print pages in multiple, in our case the front and back of eight pages of SMT on a single sheet of gloss paper. Eight plates are needed, two per printed side of each set of pages being printed, times four for each colour. This supports the four colour offset printing process used for our magazines. The pictures below shows a used plate carrying traces of yellow ink, about to be replaced by the clean new plate behind and above it. 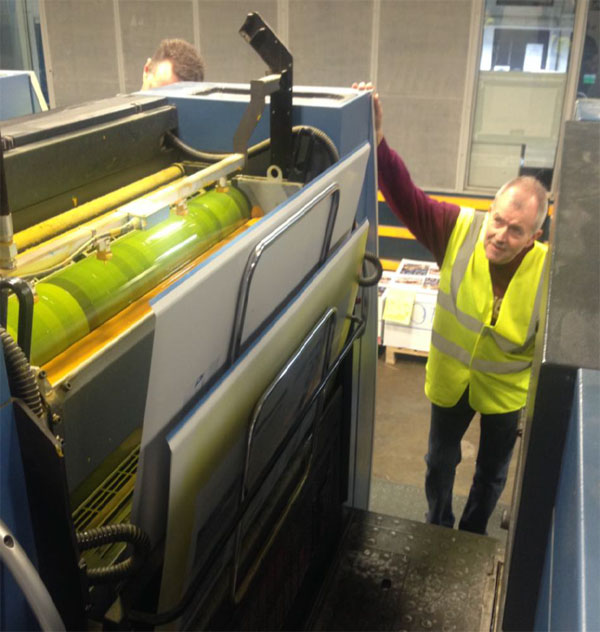 Mark has a print background so understood how the rest of the process works, but even he was impressed with how quickly some parts could be completed compared with the environment in which he formerly worked. And the speed was impressive. The sheet fed press was running at 12,700 cut sheets per hour at full speed, meaning that the first set of 16 pages (4,700 cut sheets in total) ran off in next to no time, the plates were changed for the next set of 16 pages and off it went again. Below is a short video showing sheets rolling off the press which gives a good idea of what the press looks like at speed.

The press monitors output constantly to ensure that pages are printed to the same close tolerance. Nevertheless, sheets are removed periodically for inspection by the press Minder/operator with the human eye – this show Mark and me looking at one such sheet with the press in the background. 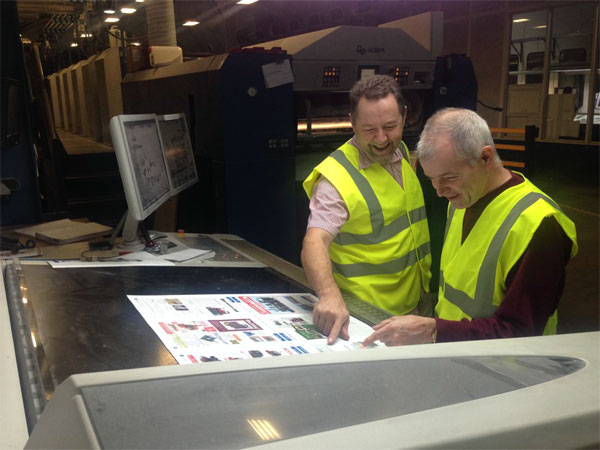 Printed sheets are stacked and as the ink is still wet when the sheet emerges from the press, a controlled amount of fine (20 micron granules) Spray Powder is blown on each sheet to separate it from its neighbour. They are then left for a couple of hours to dry completely before being moved to binding elsewhere in the building. This picture shows the first such stack of sheets – eight double sided pages of SMT. 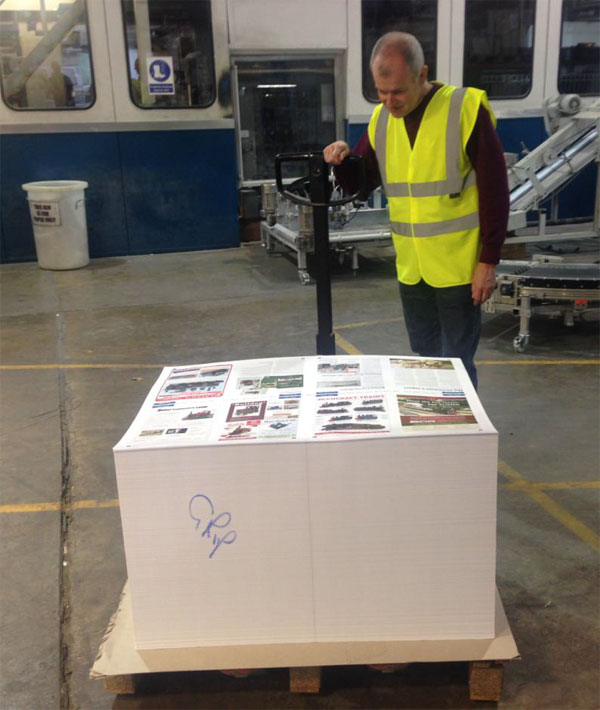 One final point – the press prints both sides of each sheet of paper, which is cut off a huge reel as it enters the press. Each sheet is then turned upside down half way through its travel down the press (by something called a perfector drum – we were shown a video to explain how it is used), so that the opposite side can be printed. All this as 12,700 sheets per hour – amazing.

The binding and packaging processes, which include uniting the magazines with the carrier sheet, took on Friday morning 13th followed by collection by Royal Mail later the same day. Mark and I weren’t able to be there to watch this so the team at Warners took a couple of additional pictures which show the binding process, where the individual pages of the magazine come together in order and are stitched with staples. Most UK addresses have already received the package and overseas mailings are on their way by Air Mail. 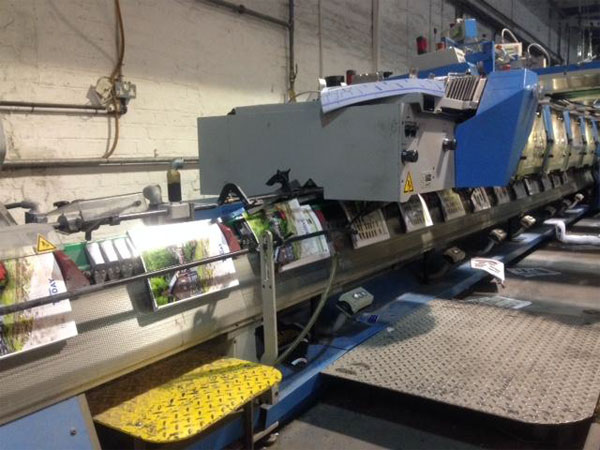 Adding the individual sheets to SMT 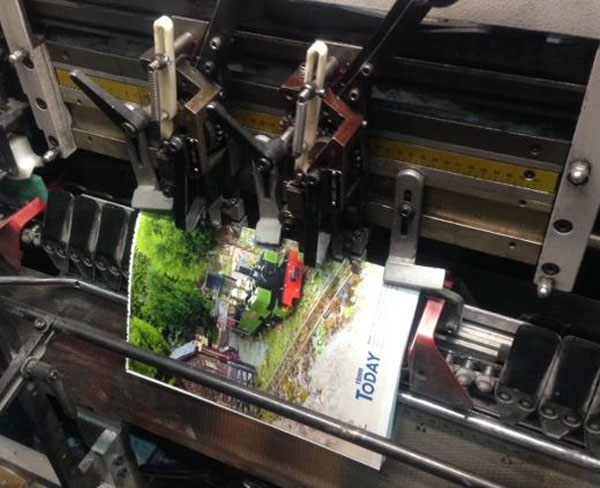 Moving printing and distribution to Warners wasn’t and isn’t part of subscription management, but it’s highly convenient to have three requirements satisfied in one place and we have reduced the Association’s costs by doing this, especially printing cost, where the reduction is substantial. Royal Mail is about to increase UK postage costs and we don’t yet know whether we can contain these within the current membership fees, but if postage hadn’t increased then we’re almost certain that the changing the way we manage subscriptions and at the same time print and distribute SMT & Bulletin would have been cost neutral for the Association.

Finally, I’d like to thank Collette Smith (subscriptions) and Paul Evans (print & distribution) and their teams for helping us with this change. Mark and I have been impressed with the knowledge and professionalism, flexibility and friendliness of everyone we’ve met or worked with. Warners are two businesses with over 420 people working in both companies, where it seems as though everyone knows everyone else. It feels like we’ve made the right choices for the Association.