My Merlin W&LLR #14 (SLR #85) appeared as Model of the Month in September 2009. I put the loco on the Heritage stand at the National Garden Railway Show in Peterborough 2014, along with a description of what I planned next. The changes described below were completed later that year, but it has taken me until now to document and photograph them. I hope this update is of interest to those who own one of these locos, because for me it has remedied the remaining issue with the design, namely control!

As delivered, the loco had a disc regulator. It was never satisfactory – fine control of speed was impossible and frequent changes in speed were the norm. My experience with the needle valve regulator on the Roundhouse Lady Anne encouraged me to see whether the shortened version of the regulator could be fitted to the loco. The judgement was that it could, but that a Roundhouse displacement lubricator would also be needed. After discussion with the ever helpful Harri at Roundhouse, the necessary parts were identified and I picked these up at Peterborough. I selected a lubricator which drained through the footplate as this provided the neatest and cleanest solution. 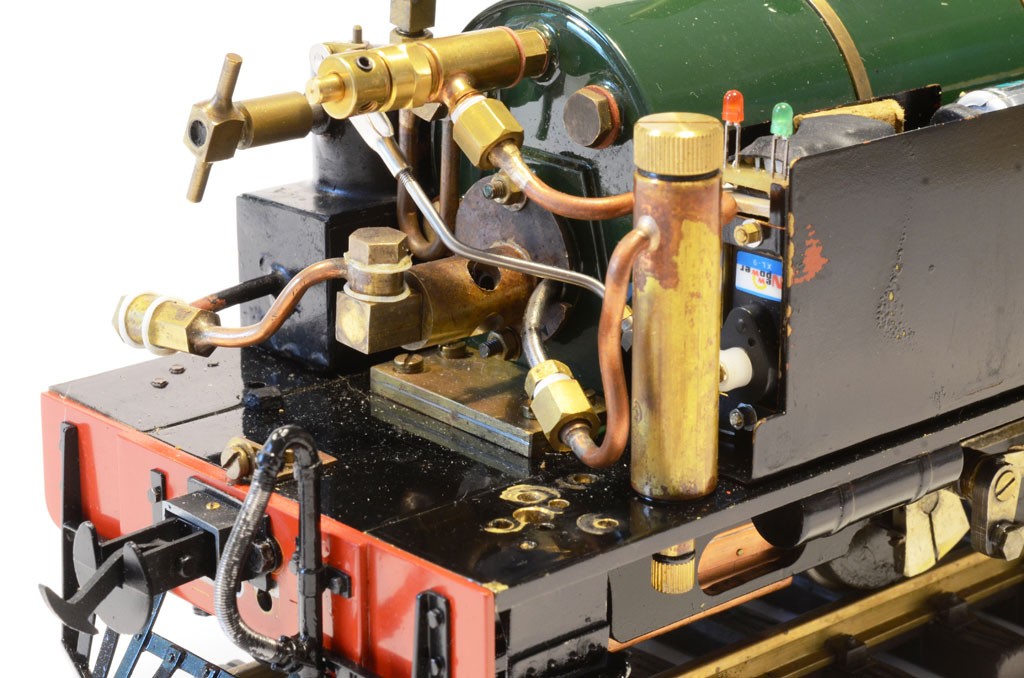 Driver’s side view, showing the new Roundhouse lubricator with drain under the cab floor. The many holes in the floor to the left of the lubricator show the two different positions of the original integrated regulator/lubricator down the 25+ years that I’ve owned this loco.

The Roundhouse regulator has an ME thread, whereas the steam take-off point on the Merlin boiler is imperial. A local member gave me a morning on his lathe, so a union was turned up from hex brass with the appropriate threads at either end. The threads were wound with PTFE to achieve a steam tight fit, and this also enabled me to lock the body so that the steam take-off to the regulator was as I needed it to be (to the right).

With the regulator in place, the new lubricator was trial fitted and once I was happy with the location, a hole was drilled in the footplate for the drain. The connection to the stainless steel super heater pipe needed to be replaced with a suitable union (also obtained from Roundhouse), to match the nipple on the lubricator pipework. The pipes were bent to suit, care being taken to achieve good alignment, the threads wound with PTFE and the connections tightened up. Though no steam test was made at this stage, the connections were all steam tight when steam was eventually applied.

The final and fiddly task was to fit servo control to the regulator. I emulated the arrangement on the Roundhouse VoR, where a dog-leg linkage is fitted to a nano servo mounted vertically adjacent to the boiler. It was necessary to remove any play from the linkage and to align the servo and regulator arms, i.e. so that they both started at 9 o’clock as viewed from the rear. The servo travel was adjusted on the Spectrum DX6 transmitter to limit movement to 90 degrees, which has been fully sufficient for normal running. 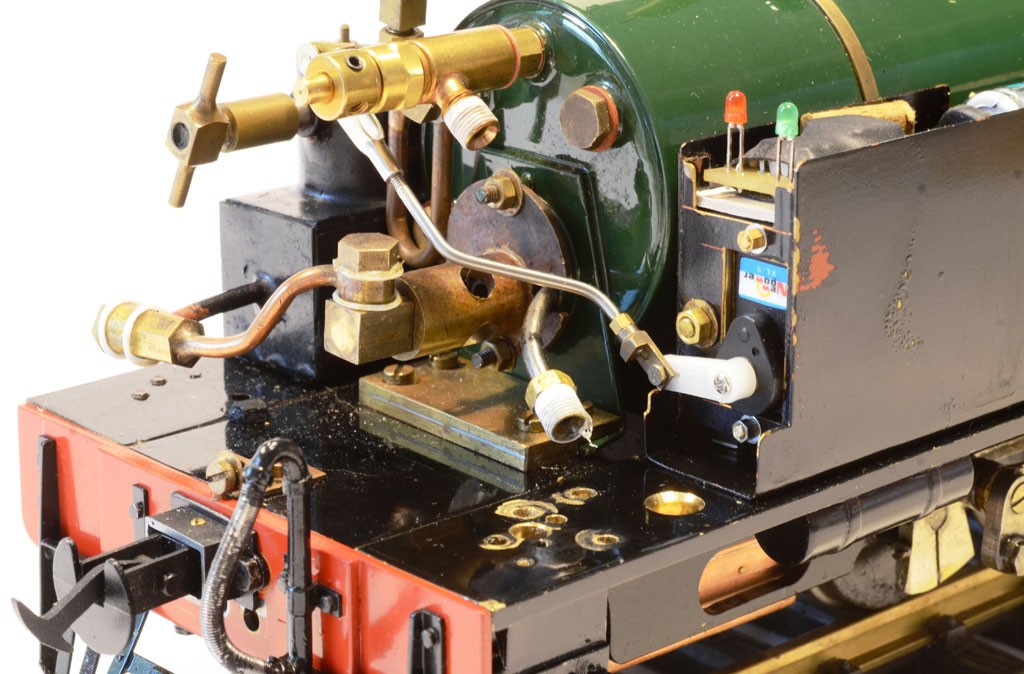 The lubricator removed, showing the nano servo built into the box holding the receiver, on/off switch, batteries and on top, a Brandbright battery condition indicator. I cut a hole in the rear wall of the box and re-enforced it with a brass plate to reduce any opportunity for movement. The on/off switch is beside the servo between it and the boiler edge of the box, the receiver sits ahead of the servo (towards the front of the loco) and the batteries are ahead of the receiver. There’s enough room – just!

The loco as delivered has the receiver battery, on/off switch and radio receiver in a box parallel to the boiler on the off-side. By rearranging the position of these items and by moving the box forward by circa 10mm, space was made at the cab end of the box for the new servo. There was even space for the Brandbright battery condition indicator to be retained. The pictures show this better than further explanation. 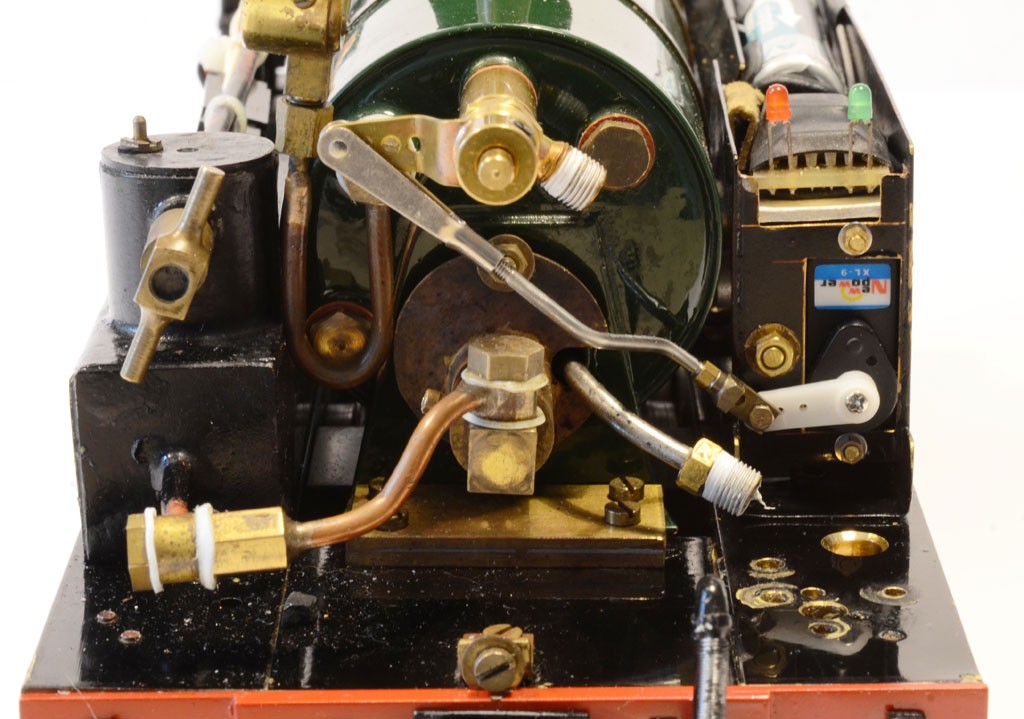 This shows the twin nine o’clock orientations of the regulator and servo arms. This ensures uniform movement of the regulator which makes the loco easier to control. Anyone with a Roundhouse VoR will recognise the arrangement (I am always pleased to steal good ideas!). Note the lock-nut at the servo end of the link – this removes flex and prevents any tendency for the link to twist. The coupling is a Regner part.

Once all the above changes were complete, a steam test was made and to my great satisfaction (and relief) the control obtained was exactly what I had hoped for. The cost of the mods was under £40.

The final change has been to fit Accucraft W&L chopper couplings at 33 mm above rail height, to match the W&L stock which I’ve converted. This may not be prototypical (a Grondana coupling has always been used on this loco on the W&L) but it makes for a very nice, closely coupled train. 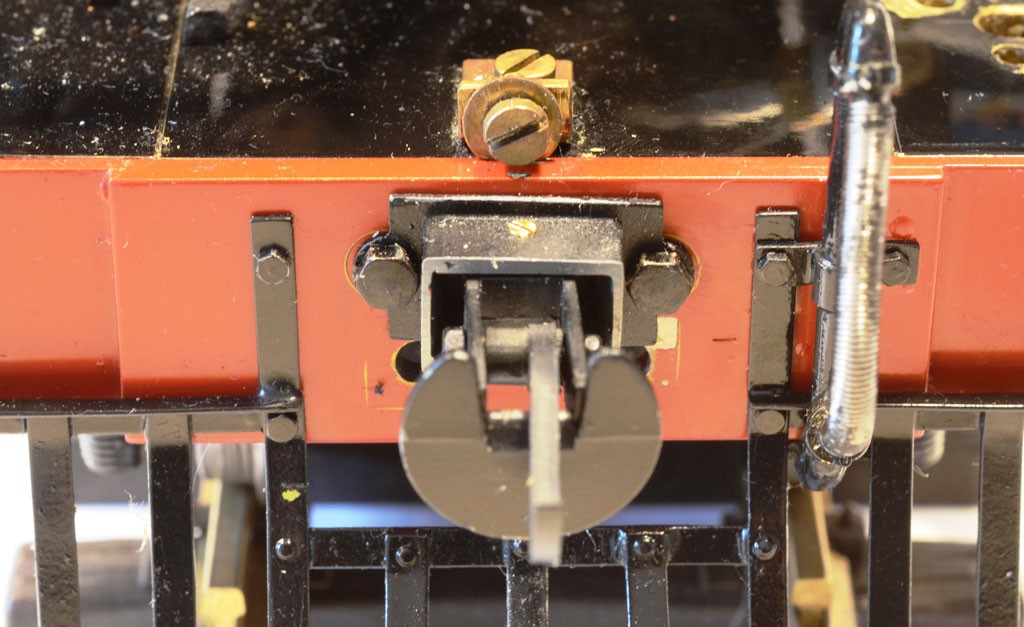 The old mounting points for the earlier (and lower) hook & bar coupling are less noticeable when the loco is in use – I will fill them and respray the unit one day when I have nothing else to do… The 6BA bolts hold the coupling and buffer beam onto the frame stretcher and are a fiddle to get in. The original Accucraft bent hook was cut down and used to create a pivot pin, which you can just see has a slot in the top.

The changes to the coupling were as follows: 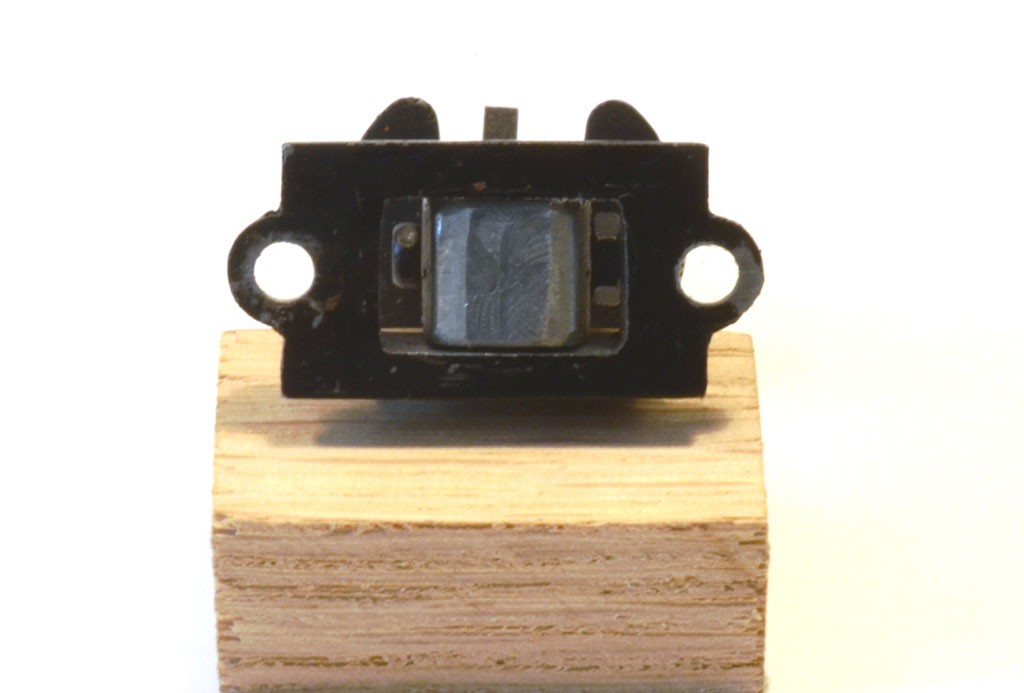 Not the best of pictures, but still showing the opening milled in the back of the coupling pocket. The spigot on the coupling is removed and the sides chamfered somewhat to reduce the protrusion behind the back of the pocket as the coupling moves. I still had to mill a corresponding pocket in the buffer beam to achieve free movement, as the next picture shows. 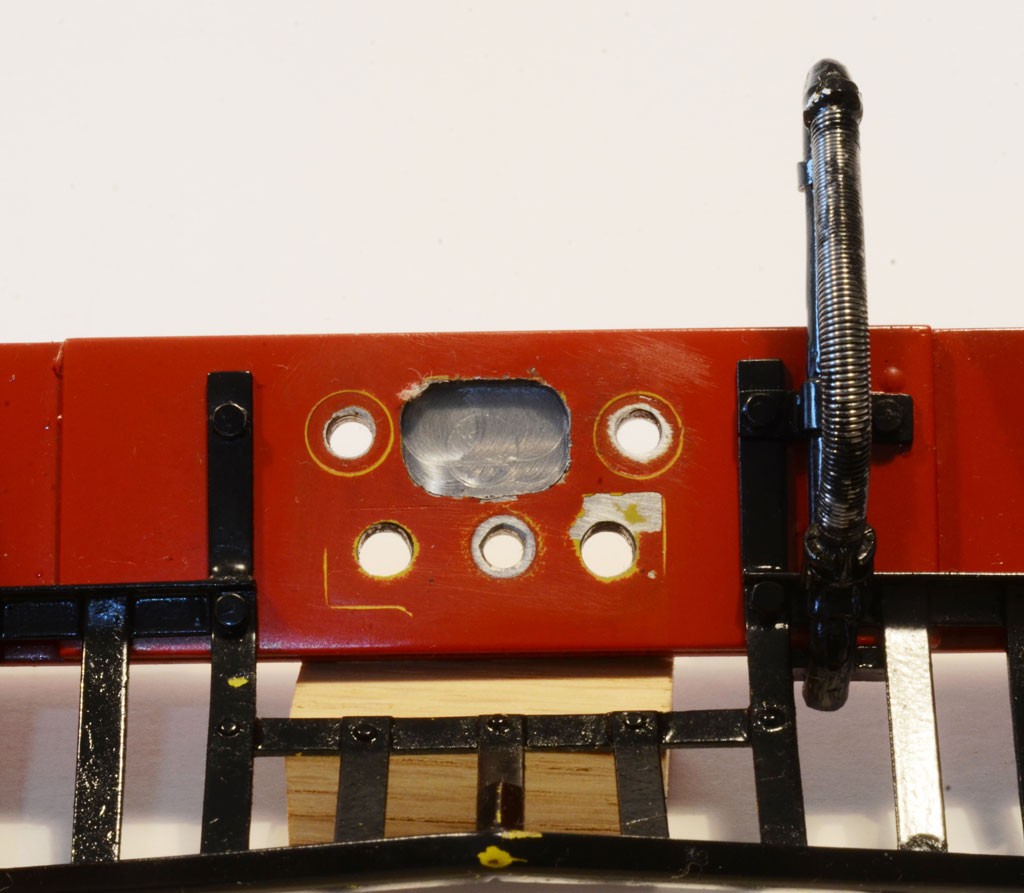 The modification to the buffer beam. I managed to mill the pocket without separating the cow catcher from the buffer beam, which was handy because I suspect after 10 years the former would probably take with it paint from the latter. The yellow is the etch primer under the top coat – the circles around the upper holes are where the washers sat, behind the bolts used to secure the buffer beam to the frame spacer when the previous coupling was fitted.

Hopefully the pictures fill in any gaps in the above. Compare this with the picture in the original article, 3rd from the bottom of the page. These changes have achieved the close coupling required; albeit I need to align couplings during shunting, as the modified coupling lacks a centring spring (there just wasn’t room for one). I could correct this by drilling a hole into the frame spacer to contain the spring normally present in the Accucraft coupling. However, that would necessitate the removal of the frame spacer, which I’m reluctant to do at this stage.

All that is now left to do is replace the brass boiler with one made of copper. I’ve had a suitable boiler made and when one day I fit it, I will move the regulator to a steam turret on top of the boiler, within the cab, to remove the opportunity for priming. The new boiler has provision for a sight glass and water top-up system. However, there is nothing wrong the existing boiler at present so this remains a job for the future. For now, I’m working on a model of Monarch, which will hopefully feature as future Model of the Month. 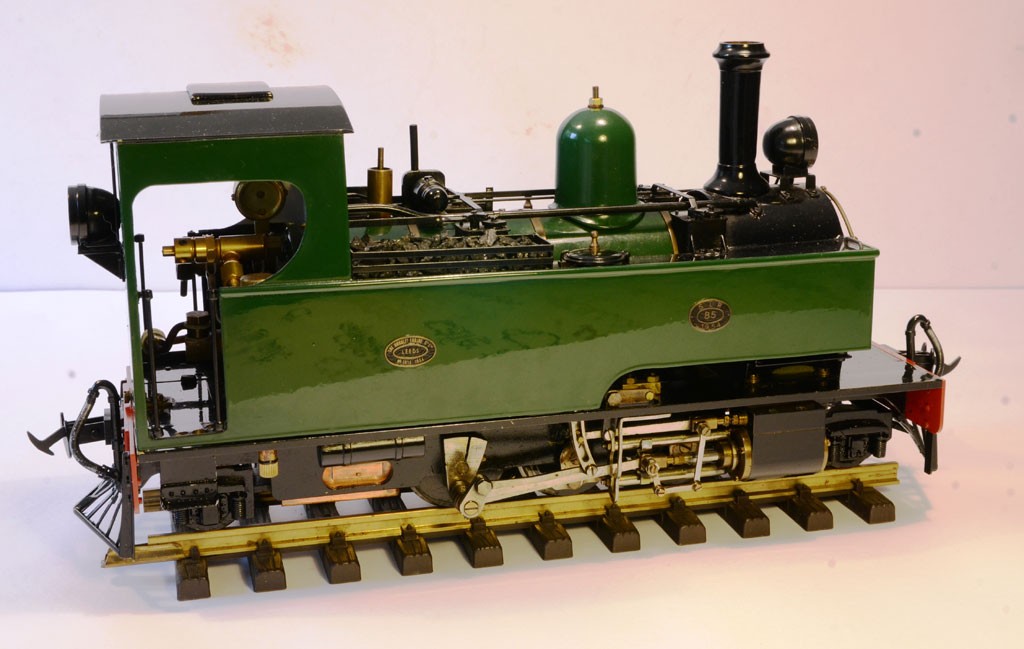 The more open cab is readily visible in this view. The top of the lubricator tucks almost out of sight behind the cab side sheet. A wooden cab floor wouldn’t come amiss and is something I’ll find time for this winter. The body, boiler and frames are the original Merlin paint finish. It’s funny how when you look at a picture of your own loco that you see all manner of little jobs that would improve it!

The changes I’ve described above have made for a more prototypical representation of what is a very well-known loco. They have also opened up the cab, making room for a driver and fireman in the future. Compare with the picture at the bottom of the September 2009 article – you’ll notice that the old square lubricator has gone. I wonder if I can convince Rob Bennett to make a figure of fireman Andrew (Charman)… 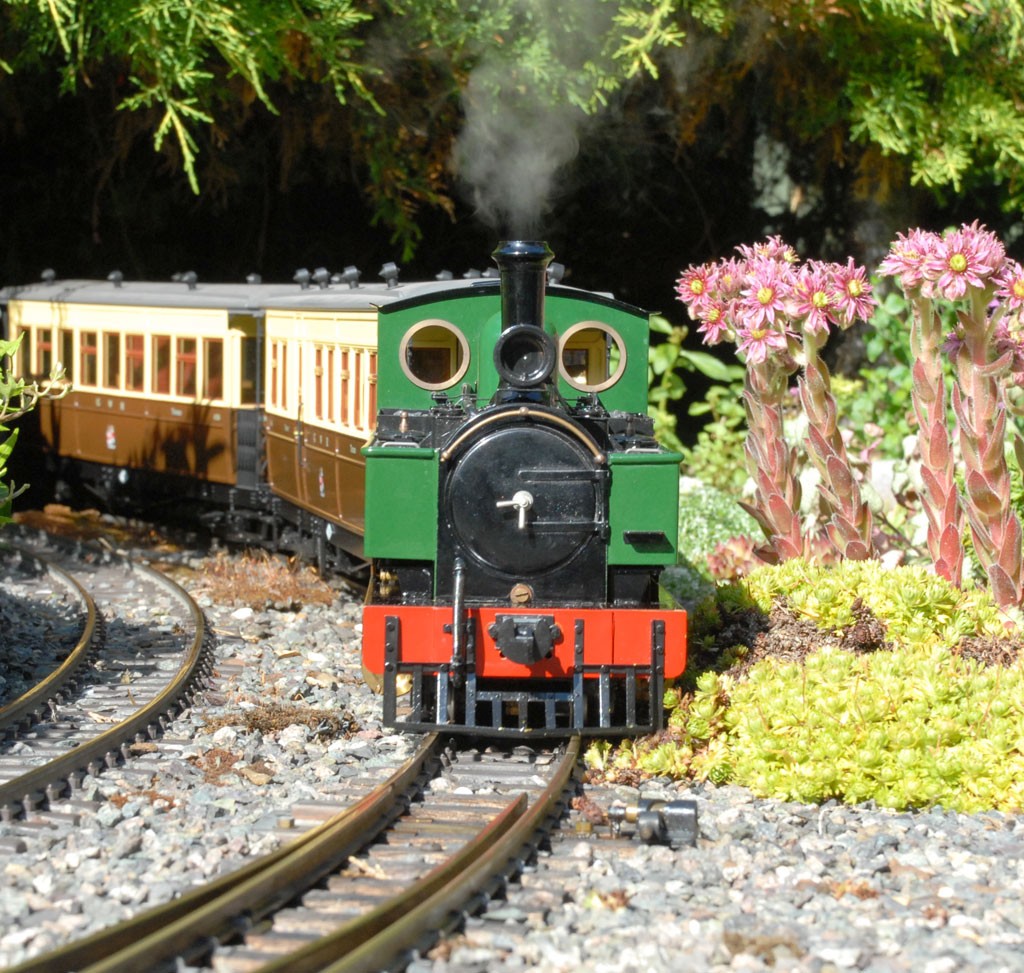 Emulating a scene which we’ll have to wait a few more years to see again on the W&LLR. More jobs for the winter are to glaze those cab windows, paint the back of the headlight black and glaze it too. The original mounting point for the regulator servo remains free – I wonder if I can use it to control a valve for a whistle? Hmm, that’s got me thinking – always dangerous!