It is my sad duty to record the passing of my good friend and 16miller, Rob Bilsborrow, after a short, sharp battle with cancer, at the age of 64, on 12th May 2015.

Rob worked in science through his life, finally at Daresbury Labs in Runcorn. He had varied interests, having won awards for brewing beer from scratch, none of this kit rubbish! A great fan of curries, he often concocted his own creations. Astronomy was another interest, as was model aircraft. I believe it was after one expensive crash too many that he decided to stay on the ground with railways.

A confirmed steam fan, Rob laid his Mossala Hill Railway to 45mm gauge, with a Colonial theme, and a strong Indian influence. The line was typified by Garratt-hauled trains of curry sauce tankers, and the Madras Mail, with his coal-fired Bangalore Belle. In recent times, he developed an interest in things German, and had collected some LGB Saxonian stock to run with his IIIK.

Rob was a competent model engineer, and helped most of our local MAWLAG’s with repairs, or know-how. We both built the Association Victory loco, and modified them in different ways. His Colonial interests led to his occasionally turning up at an unknown small line with a loco that was not comfortable. He then spent a good deal of time crouching down to tweak things, to the amusement of onlookers.

It was typical of his character that, while at hospital in March, waiting for his scan, he perused Facebook and found a cancelled Roundhouse Stanley. He promptly bought it, and had it delivered the following day. I visited a few days later and we ran our Stanley twins together.

Rob was unable to make the journey to the Peterborough show, so I took his Victory for the parade. When I arranged to return it, I found he was admitted to hospital on the day. During this final stint he was on the smartphone again, negotiating another loco purchase, and planning mods to it. Sadly this was not to be.

Rob was actively supported in his ferrinequinology by wife Maria, who manned the buffet car on his open days. A friendly, helpful guy, he will be sorely missed by all at the Mersey And West Lancs Area Group. 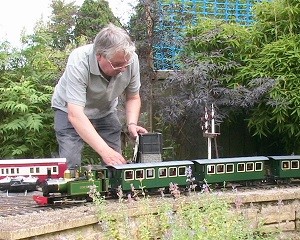