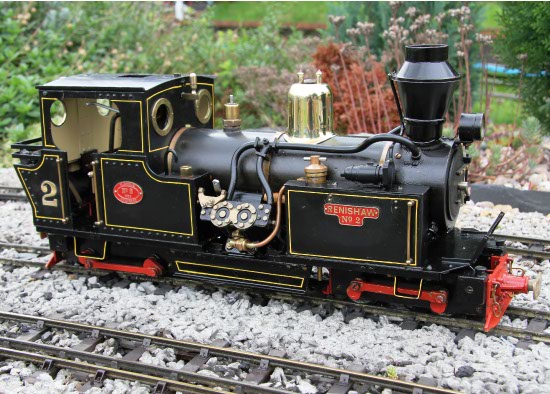 Whilst the word “Heisler” tends to conjure up pictures of North American logging railroads, locos of this type were also built in small numbers by Avonside and later Hunslet for service on the 2ft gauge sugar cane railways of Natal, South Africa. In total, 7 locomotives were delivered to various sugar estates, 3 of them being of 4 cylinder configuration, the remainder being slightly smaller 2 cylinder locomotives. The last surviving loco, Renishaw no.4, a 2 cylinder model, was withdrawn from service in 1968 and is now preserved in the UK as part of the Phyllis Rampton Trust collection. 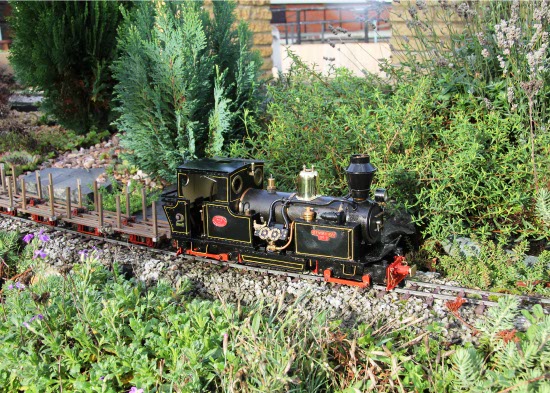 The model is based upon the larger 4 cylinder model as supplied by Avonside in 1931, although the number/name carried is somewhat misleading as the Renishaw estate only ever owned a 2 cylinder model. The prototype “Renishaw No.2” was in fact an Avonside 0-4-0 tank which is still extant in South Africa. 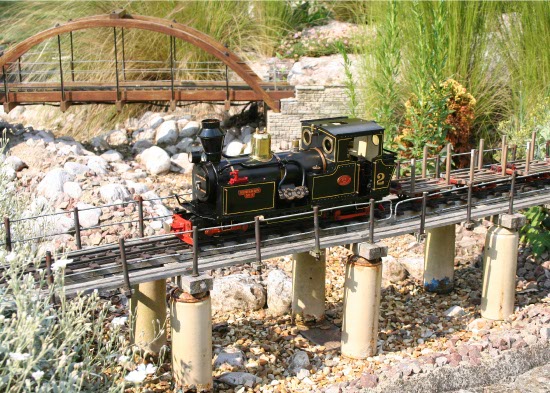 This model was one of Peter Angus’s earliest locomotives, being built in 1984 as his works number 5. It was also one of his first ventures into the various articulated and/or geared locomotives that have become his hallmark. He’s since told me that at that time, he’d not managed to source the original builders drawings, so it’s not quite a scale model, but in my eyes at least, if anything it looks slightly better proportioned than the prototype. 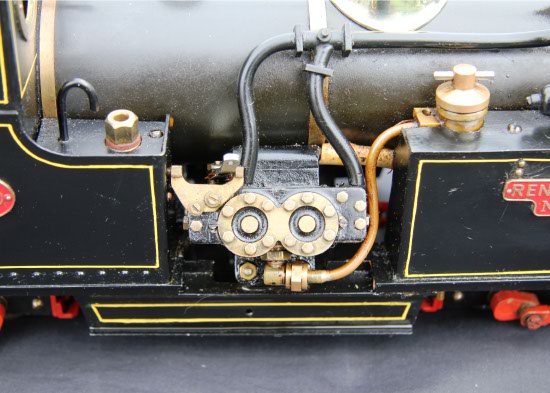 As with many of his early models, power is provided by a Maxwell Hemmens twin cylinder, piston valve “Caton” marine engine with a geared drive. In this case the engine is mounted alongside the boiler at an angle forming one half of the “V4” engine unit of the prototype. On the other side, balancing things out is a dummy cylinder casting, apparently sourced from a similar engine unit. Power is transmitted from the engine crankshaft to the bogies by 2 cardan shafts with sliding sections and 2 universal joints on each shaft providing the necessary articulation. A flywheel is also fitted to one end of the engine unit. 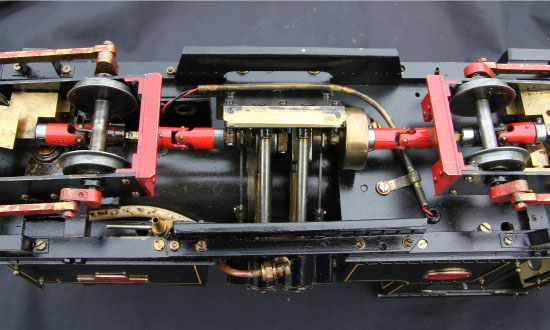 The shafts drive the outer axles of both bogies through a reduction spur gear, with the power being transferred to the other axle by the outside coupling rods. The bogies themselves sit on substantial thrust bearings allowing articulation in both planes but eliminating any tendency for the torque from the engine to make the loco lean to one side. 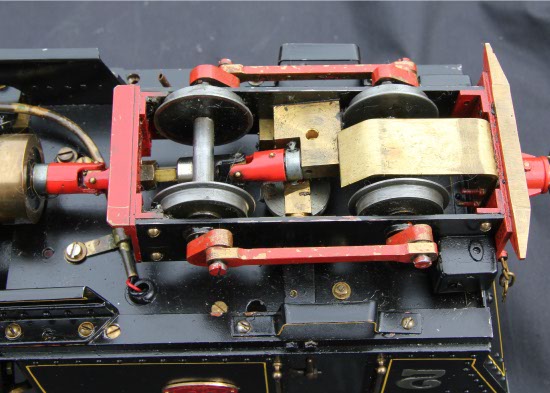 As per the prototype this leads to a powerful but very flexible loco that will cope with curves down to around 24 inch radii and undulating track. The model runs on 32mm gauge and isn’t gauge adjustable. 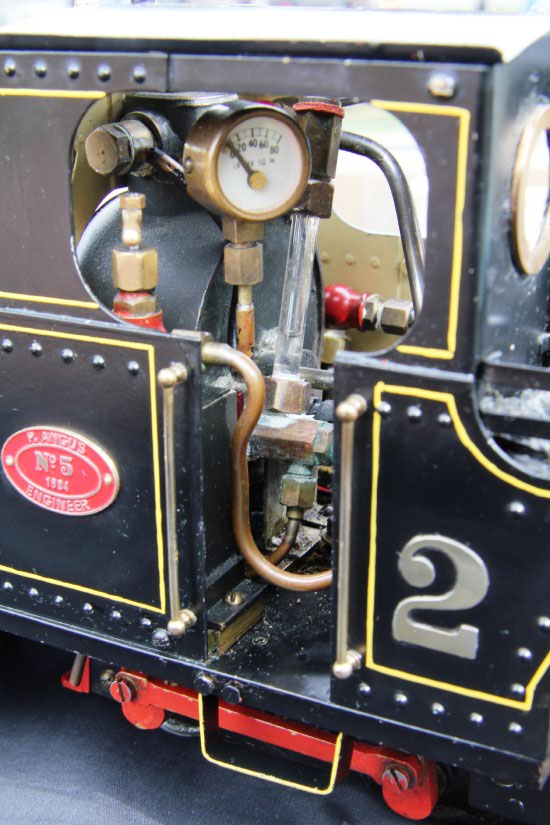 The fairly sizeable boiler is gas fired by a traditional single poker burner. Despite the geared down engine being fairly steam hungry, there is no problem maintaining a steady working pressure of 50psi although the loco is equally happy to potter around with 20-30psi on the clock. Running duration on one fill of gas is a pretty respectable 30-35 minutes. 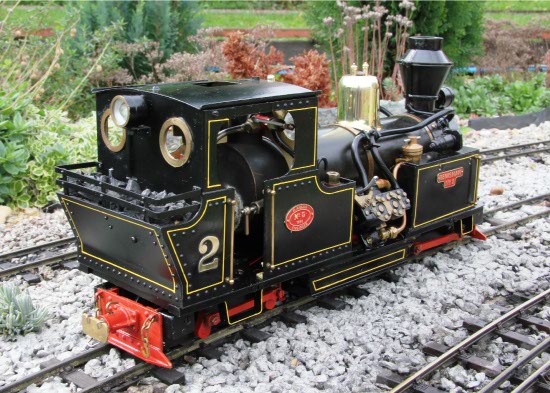 The loco featured in Peter Dobson’s book of 16mm locomotives whilst still under construction. Comparing the current model with that photograph it apparently underwent some changes during its life. These include the re-siting of the displacement lubricator from its original position in the cab to the right hand front tank and the addition of dummy steam pipes and other detail. From other photos I’ve seen published, at some point it also gained new builders plates and changed colour from grey to its current black livery, lined in yellow. 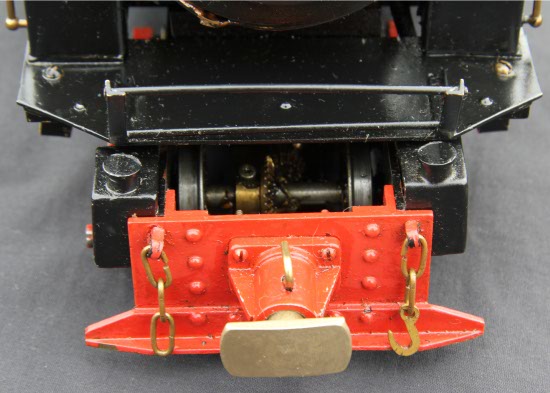 I had one of those “rush of blood to the chequebook” moments and purchased the model at the Merstham Show in 2003, and it has been a regular performer ever since. As a testament to Peter’s engineering, apart from inserting some brass shim behind the front gearbox unit to take up a little wear on the spur gears, it has required no mechanical attention during that time, and I’d love to know how many actual miles it must now have clocked up. 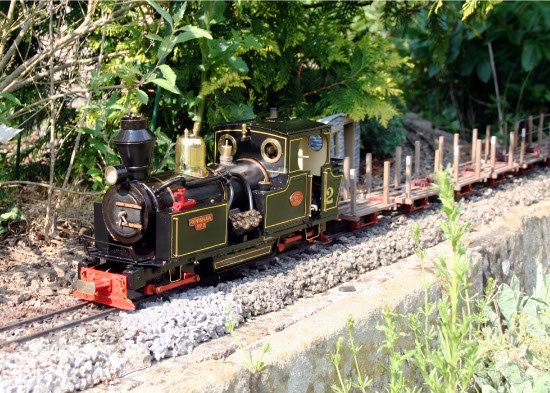 Despite its 26 years of age, it still runs like the proverbial sewing machine and is a regular performer at garden meets, Guildford group open afternoons and on our portable layout Mwch Grumblyn. The last couple of years have also seen it run on Phurcombe Hall at Stoneleigh. In fact it’s the perfect manually controlled loco for garden meets and shows, as its steady running means its pretty much “gradient proof” but if required it does have an adequate turn of speed as to not hold up other traffic.

One day (hopefully?) I will get round to constructing a rake of proper Natal cane wagons to go with it, but at present it usually runs with my set of Queensland wholestick cane trucks, which don’t look too out of place. 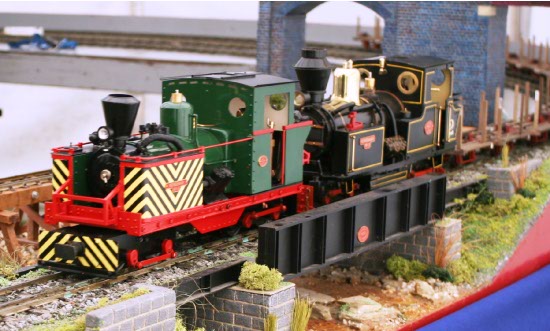 Over the last 12 months I’ve also had the good fortune to be temporary custodian of its younger sibling “Renishaw No.4”, a model of the now preserved 2 cylinder version and finished in it’s somewhat “striking” final livery carried prior to withdrawal in 1968. This loco (pictured in SMT133) was also built by Peter Angus, in 2009, and by the time you read this will have been prised from my grasp by its rightful owner David Cairns, and be residing in South Africa. 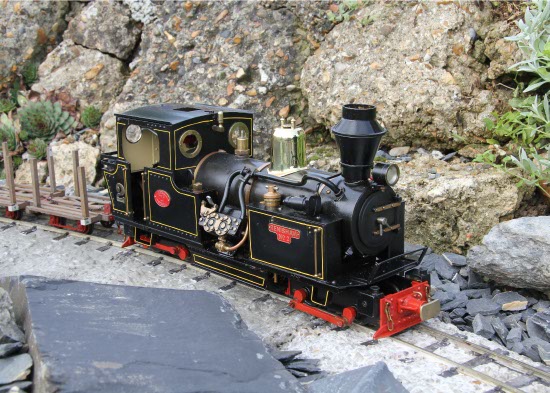 The two models make an interesting comparison of 25 years of 16mm development and Peter’s prolific output. I’d suggest the judges are still out in terms of what you might think of the respective liveries, but I can’t ever see David losing track of his in the garden!