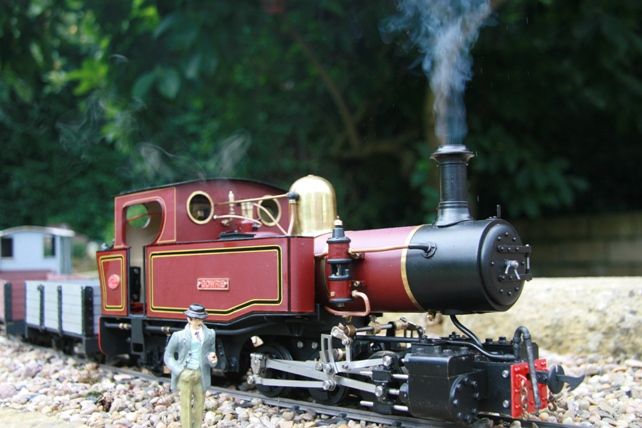 Beauty always was in the eyes of the beholder.  Gowrie is no exception.  Gowrie was built by Hunslets’ in 1908 for the N.W.N.G.R and has the apparent distinction of being the last Fairlie built for use in the British Isles.  The locomotive was ordered to replace the pair of Vulcan Foundry engines (Snowdon Ranger and Moel Tryfan).  Whilst sharing the same wheel arrangement as its predecessors the use of Walschaert’s outside valve gear gave the locomotive a considerably different appearance.  The large reservoirs slung under the footplate contributed to the locomotive’s distinctive appearance.  It is understood that the railway sold the locomotive to Government during World War 1.  Its use during this period remains largely unknown however it is known that it was used for aerodrome construction in Yorkshire following the war.  It is also known that the locomotive was inspected in the scrap merchants Wakes of Darlington in 1923 with a view to reacquisition.  However Colonel Stephens opted instead to purchase an ex war department 4-6-0 Baldwin from France. 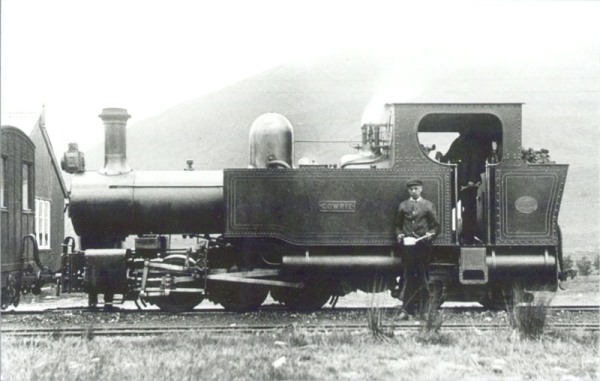 The relatively small diameter boiler (2 ft, 5 in) and the shortened side tanks are alleged to have detracted from the performance of the locomotive.  As with the rebuilt Taliesin today the crews tried to run with the water tanks as full as possible to maximise the load over the driving wheels.  The model uses a t-flue to good effect, again moving the centre of gravity as far forward as possible over the driving wheels.  It also gives the added benefit of greater water capacity for longer running.  Whilst this is a scale model a small number of compromises have been made to improve the model.  For example the side tanks are slightly wider than the prototype (to accommodate the radio receiver).  Similarly the air receivers under the footplate have been shortened to allow the front power bogie to negotiate smaller radius curves.

The model uses a Roundhouse Lady Anne chassis turned “inside out”.  The standard Lady Anne chassis is an outside frame with the wheels sitting in-between the chassis sides.  Gowrie uses the same chassis sides but they are spaced ¾” apart with the wheels on the outside.  The wheel castings I used are ¼” thick, this means the cylinders and valve parts need to be spaced out by the same ¼” to retain the same geometry.  I shaped the standard Roundhouse cylinders to closer represent those fitted by Hunslet.  To keep the geometry similar I used the Lady Anne flycranks and soft soldered them onto the wheels castings. 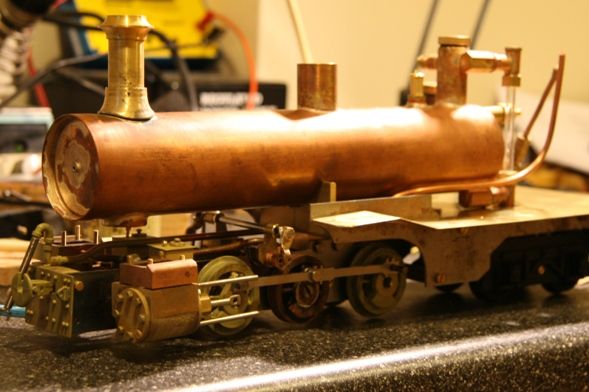 The boiler was fabricated by Finescale Engineering, given the length of exposed boiler barrel I elected to lag the boiler and then clad it.  Cladding the boiler – nightmare getting the holes for steam dome, chimney, and safety valve turret should be a simple measuring job.  I ended up fettling holes with a rat-tale file, so clearly I cannot measure.  I drilled the holes using a hole saw which the box told me was for use by plumbers.  As the holes weren’t circular I had to drill them after I’d made the cladding wrap around the boiler.  The cladding was bent with the rolling pin and lots of thick cable ties.  To drill the holes with the hole saw I sprung the cladding off and drilled them with a piece of 3/4” wood underneath to allow the pilot drill to remain centred. 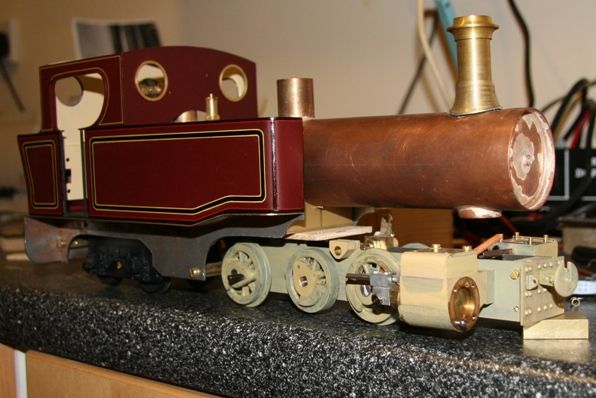 With the boiler clad and sitting on the chassis the body work is pretty straight forward, the radio sits under the footplate.  I toyed with fitting the servo for the valve gear in between the chassis frames of the power bogie.  My concern over lack of torque however got me back to needing to fit a Hitec HS81 servo, which wouldn’t fit.  Consequentially the servo is sitting under the cab floor and runs through an intermediate pivot, which allows the mechanical linkage to operate through the pivoting action of the power bogie. 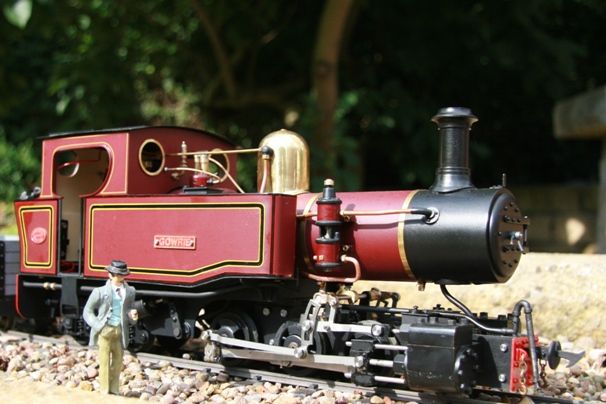 So how does it run, well it’s got all the qualities you’d expect with a Roundhouse chassis, the high centre of gravity seems to make it wobble on less discerning track, but that only serves as a reminder to me to slow down and drive at prototypical speeds!  The radio is my favourite Hitec 3ch Ranger with HS81 servos.  That said I’ve recently purchased a DX6i and having fitted it to one engine I am now looking at retro fitting additional receivers into my other models.

The engine was built to run at local area group meetings where the radi prevent me running L&B Manning Wardles with their long overhangs.  Has it achieved that aim?  Yes I can now negotiate Peco set track corners with ease.  I have it on good authority that one of the custom loco builders is considering building a batch of Gowries along similar lines.  If you’re interested It may be worth you calling a certain Mr Angus….